Skip to content
Always look at the date when you read an article. Some of the content in this article is most likely out of date, as it was written on December 31, 2020. For newer information, see our more recent articles.

Over the last three months, NVIDIA has been doing a rolling launch of their new GeForce RTX 30 Series video cards, culminating in the GeForce RTX 3060 Ti 8GB which just recently hit the market. While gaming is almost always a major focus during these launches, professional applications like Premiere Pro, DaVinci Resolve, and GPU rendering engines are becoming more and more important for NVIDIA's GeForce line of cards. 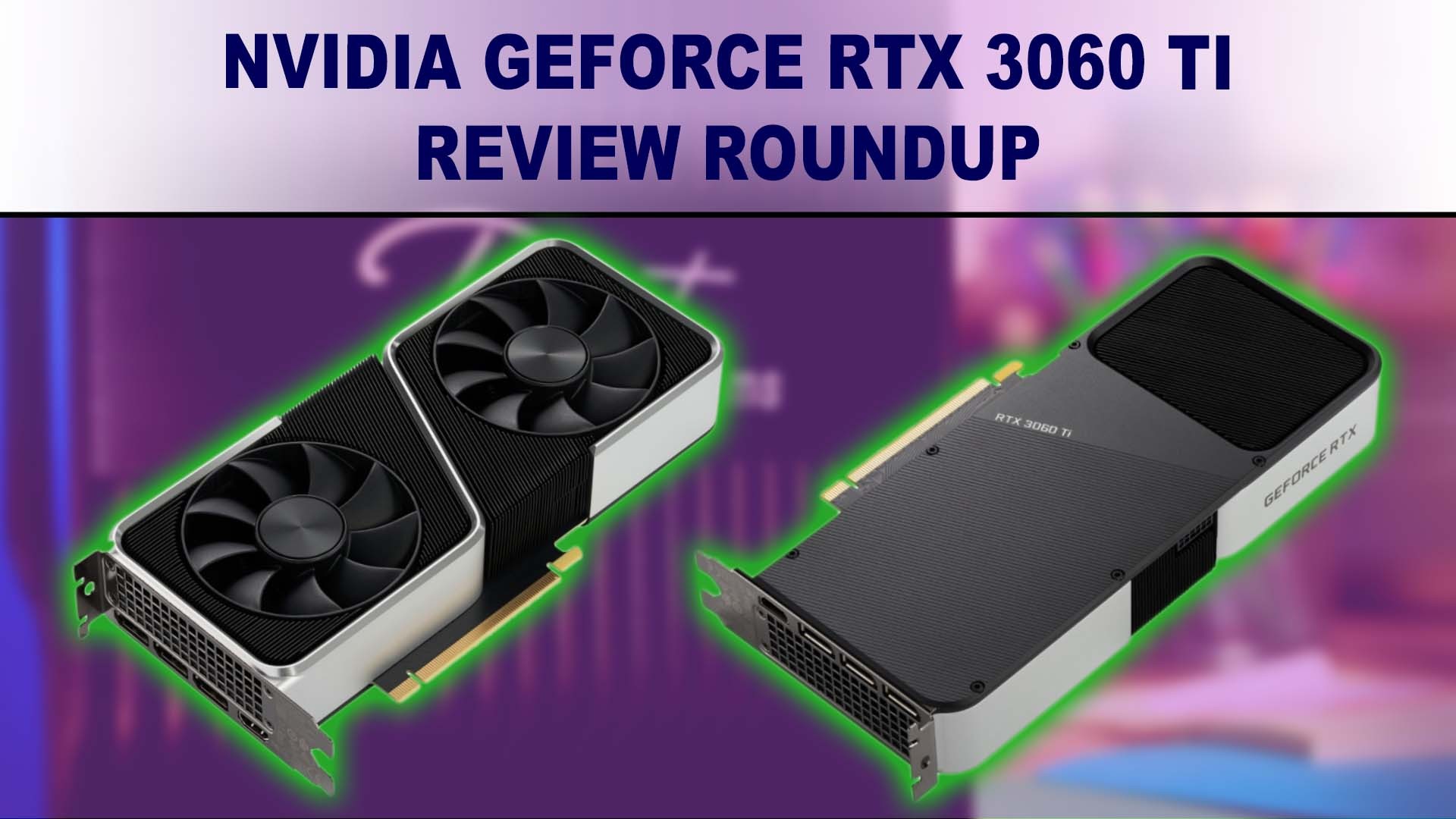 Summary: Overall, the new NVIDIA GeForce RTX 3060 Ti is a very solid GPU for DaVinci Resolve. At most, the RTX 3060 Ti trails the RTX 3070 by just 8%, but can be as much as 2x faster than the AMD Radeon 5700 XT. This also makes the RTX 3060 Ti faster than any AMD GPU we have tested to date, besting even the Radeon 6800 XT which costs significantly more. This makes it a terrific option for those on a tighter budget. 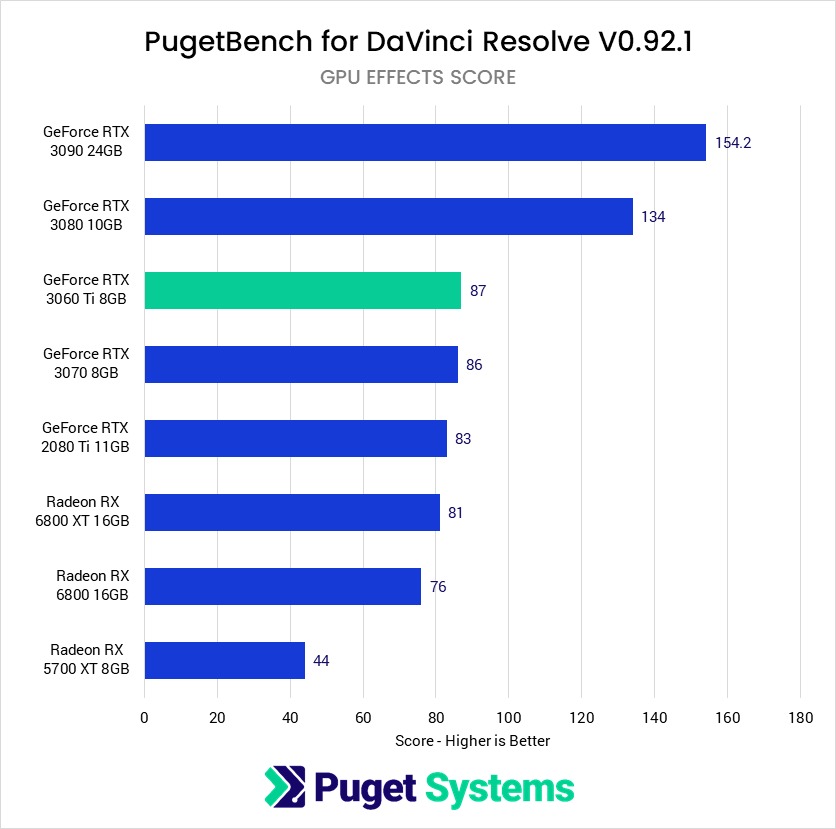 Summary: Overall, the new NVIDIA GeForce RTX 3060 Ti is a very solid card for Premiere Pro and in some cases can be up to 41% faster than the AMD Radeon 5700 XT. That puts it about on par with the significantly more expensive AMD Radeon 6800, and only a small 5% slower than the NVIDIA RTX 3070. This makes it an excellent option for Premiere Pro users that are operating on a limited budget. 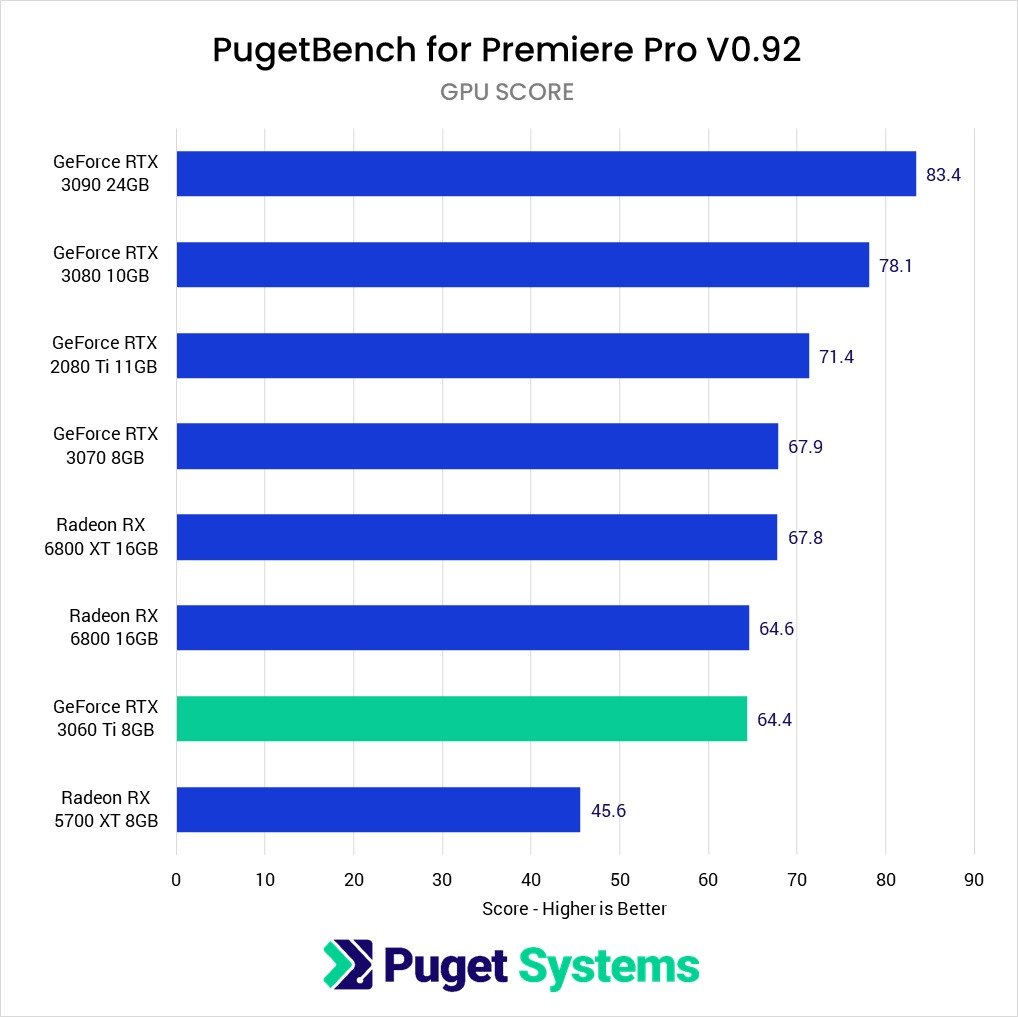 Summary: For most users, After Effects is going to be CPU bottlenecked long before the performance of your GPU comes into play. But in situations where the GPU is being heavily used, the new NVIDIA GeForce RTX 3060 Ti 8GB can be around 8% faster than the Radeon 5700 XT 8GB in After Effects. It is also only slightly slower than the more expensive RTX 3070 8GB, making it a great way to save a bit of money so you can invest more into your CPU or RAM. 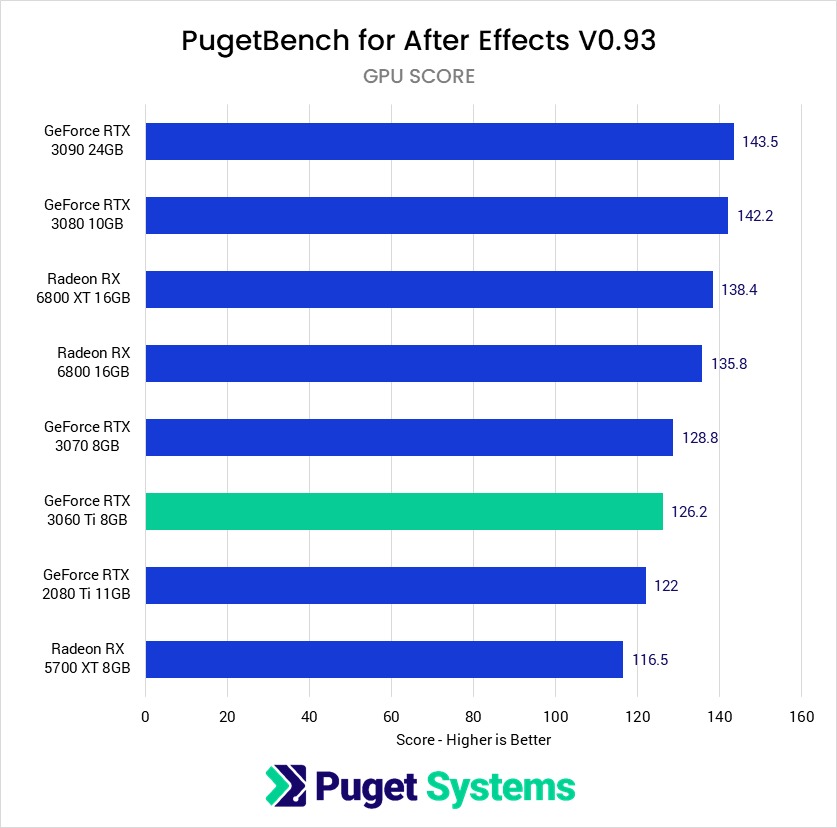 Summary: The NVIDIA GeForce RTX 3060 Ti 8GB consistently ended up at the bottom of our charts – although since it ties with the Radeon 5700 XT as the least expensive GPU we tested, this is largely to be expected. Even then, however, it is very important to note that all the cards we tested performed within the margin of error for our Photoshop benchmark. So, while the RTX 3060 Ti is most likely not quite as good as a more expensive GPU, the difference isn't definitive and is going to be impossible to notice in your everyday work. 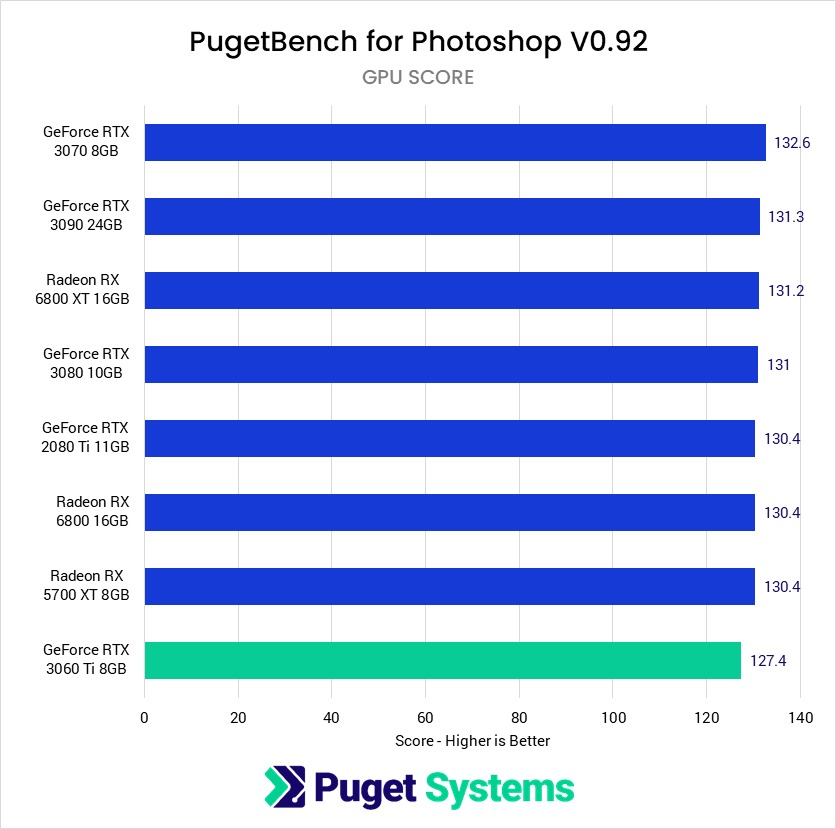 Summary: The GeForce RTX 3060 Ti offers solid performance in GPU rendering, coming very close to the RTX 3070 for $100 less! For an entry-level rendering system, then, the RTX 3060 Ti is a great choice. With the Founders Edition cards that NVIDIA sells directly, two of these cards should be doable in many cases – as long as there is some space between the cards and plenty of airflow from chassis fans. For more than two GPUs, though, blower-style cards are really needed… and it seems unlikely that those will be coming any time soon, if the lack of RTX 3080 and 3070 blower models is any indication. Users who want more than two GPUs, NVLink support, or more than 8GB of video memory for scene data will probably want to look at the RTX 3090 24GB or the upcoming A6000 48GB instead. 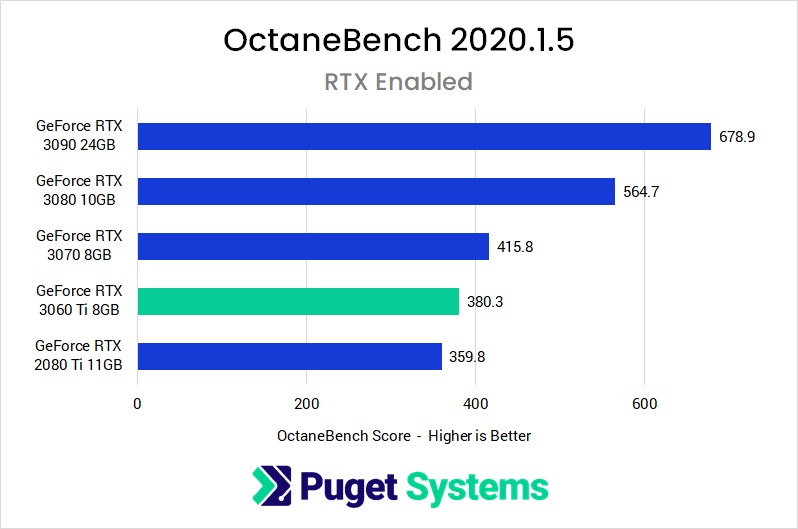 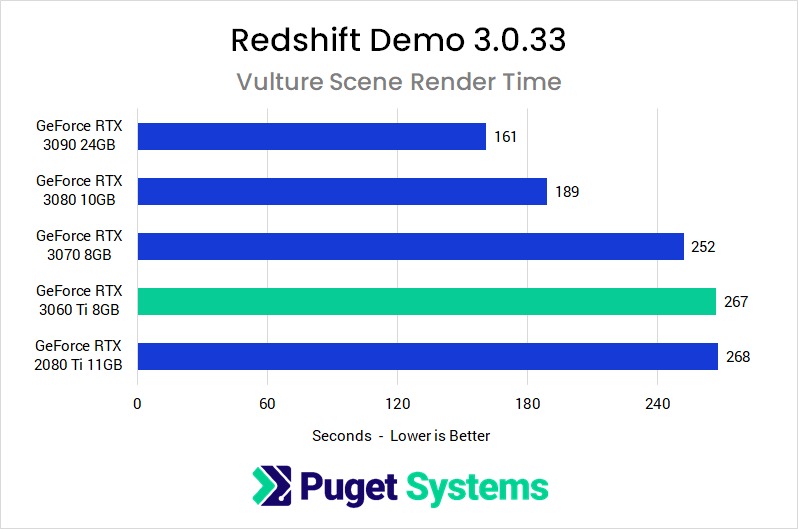 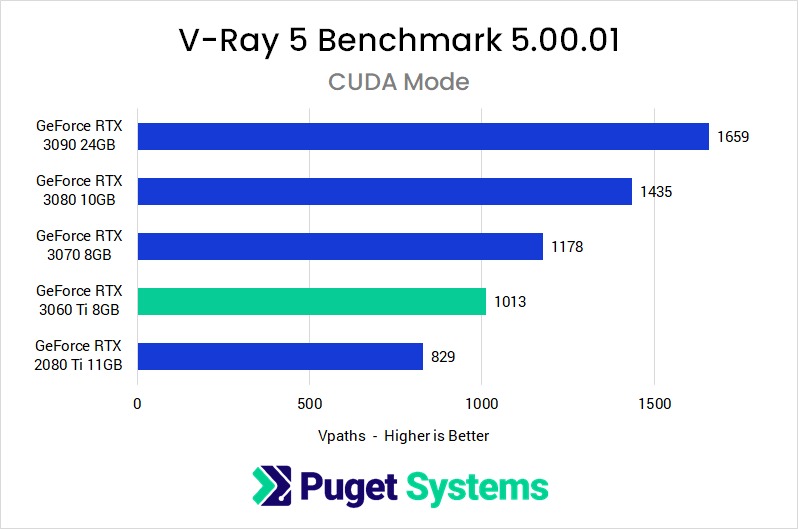 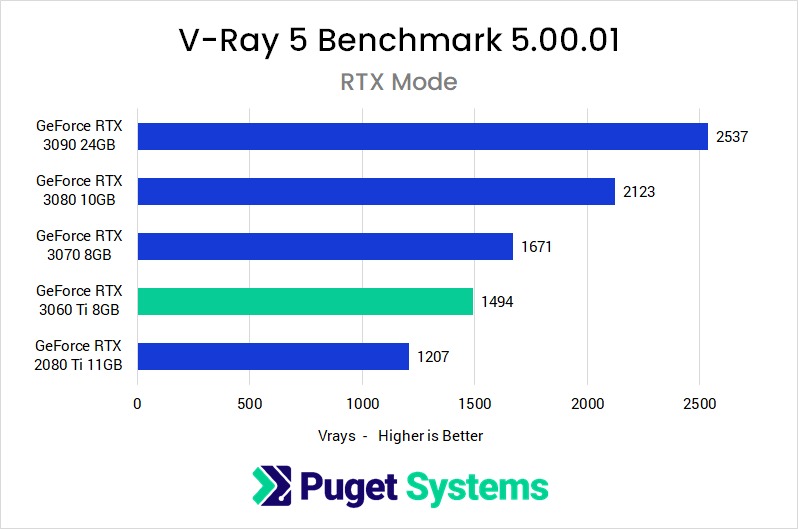 How well does the NVIDIA GeForce RTX 3060 Ti perform overall?

In most of our testing, the new NVIDIA GeForce RTX 3060 Ti 8GB does very well – at times matching the more expensive RTX 3070 and at worse only falling behind by ~14% in GPU rendering engines like V-Ray. It is even capable of beating the top-end RTX 2080 Ti from the previous generation in many of the applications we tested! Compared to AMD in the applications that support both CUDA and OpenCL, the RTX 3060 Ti ranges from being just 8% faster than the Radeon 5700 XT to almost 2x faster in applications like DaVinci Resolve.

Combined with the fact that the GeForce RTX 3060 Ti has 8GB of VRAM (matching the GeForce RTX 3070 and Radeon 5700 XT), this makes the 3060 Ti a terrific card for the price. In applications where the GPU isn't as critical (Photoshop, After Effects, etc.), it is a great way to get more performance than most users will need, while also gaining access to the latest RTX features. And in the applications that do utilize the GPU heavily (DaVinci Resolve, GPU rendering, etc.), it holds up very well against the RTX 3070, and often far out-paces the current offerings from AMD at that price point.

Due to the terrific performance we saw with the RTX 3060 Ti, we currently are offering it as an option in many of our workstations. If you are in the market for a system, be sure to visit our solutions page to view our recommended workstations for various software packages, our custom configuration page, or contact one of our technology consultants.