About a month ago, we mentioned on a Twitter post that we were looking into using graphite pads instead of thermal paste on our CPUs.

Trying out a graphite pad instead of thermal paste. If this means less mess when doing CPU swaps over and over I'm completely onboard! pic.twitter.com/ear46gXupT

For those unfamiliar with these concepts, thermal paste is the traditional material to use between a CPU (processor) and a CPU heatsink to ensure that they are making good contact. Since no man-made surface is perfectly smooth and flat, thermal paste is used to fill any minuscule gaps between the two surfaces in order to ensure that all of the heat from the CPU is efficiently transferred to the heatsink.

The issue with thermal paste is that no one agrees on the proper application technique (even after we have done testing showing that it largely doesn't matter) and if you need to do a lot of CPU swaps like we do in Puget Labs, it can get messy, annoying, and somewhat expensive.

Graphite pads, on the other hand, come in sheets that can be cut down to the exact size you need. Rather than applying from a tube, you simply set it on top of the CPU and throw on the heatsink. There have been numerous posts and forum threads about this (just search Google for "graphite pad vs thermal paste"), but what got us interested in them was reports that not only do they cool as well or better than thermal paste, but that a single pad can be used over and over again.

No more cleaning and reapplying thermal paste over and over when doing CPU benchmark testing? Customers not needing to apply thermal paste if doing a CPU swap or upgrade in the field? Sounds amazing!

The unfortunate reality of graphite pads vs thermal paste

We did plenty of thermal testing, and rather than getting into details let's just say that the graphite pad was just as good as high-quality thermal paste. For most of the Intel X-series refresh testing we did in Puget Labs, it was terrific since we didn't have to deal with messy thermal paste multiple times a day.

However, issues started cropping up after we had done about a dozen CPU swaps. At first, we just had a few random reboots which we blamed on either overnight Windows updates or simple pre-launch bugs. However, it got worse and worse to the point that we were no longer able to finish even our Adobe Photoshop CC benchmark. We looked at the CPU core temperatures and while they seemed a bit high, they were nowhere near problem levels – only 83C at max. We even tried bumping up the CPU voltage which was something we used to have do on previous gen CPUs like the i7 7820X. That helped, but didn't resolve the issue.

What fixed the problem? Switching back to thermal paste. 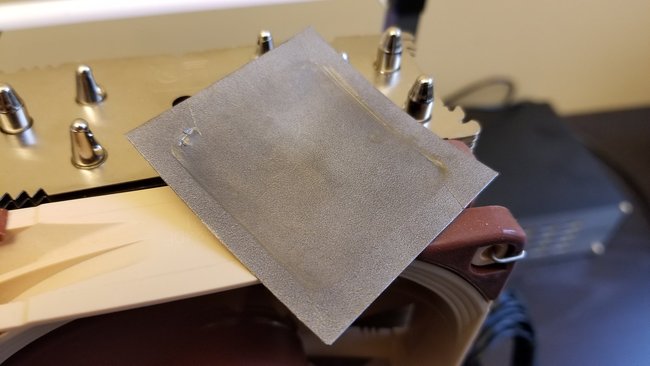 Our best guess as to what happened is that since a graphite pad doesn't "bounce back" after being compressed, we were no longer getting the full space-filling effect needed to ensure proper contact between the CPU and heatsink. We were obviously getting decent contact since the CPU core temperatures were still just fine, but it must not have been enough.

As we did more and more CPU swaps, different areas of the graphite pad were being compressed. Since one CPU may have a surface bump in one place, but another CPU doesn't, this resulted in a pad that did not fit the contours of the CPU surface. Either the last CPU we tested had a very uneven surface, or this issue simply compounded over time.

Are graphite pads a failure?

The issue with graphite pads is that they are not really reusable. If you think of them as a one-time use item, they should work just fine and are arguably easier and certainly cleaner than thermal paste. But the more times you reuse the pad, the more likely you are to run into problems.

The issue for us is that there is no real way to know how many uses you can safely get out of a graphite pad. If the CPUs are very similar in surface contour, you might get 20 or more uses in a row before problems start cropping up. On the other hand, if you have two CPUs that are very different, you might get stability issues right after that first CPU swap. This unknown quality removes one of the primary benefits of graphite pads.

This hasn't completely soiled the idea of graphite pads to us since we could simply replace the pad on every CPU swap. However, in many ways it is easier to have a big tube of thermal paste rather than a stack of graphite pads since with the pads you need to make sure they stay relatively clean and free from dust. On the other hand, it would be much easier to simply send along a graphite pad rather than a tube of thermal paste to a customer in the field who wants/needs to do a CPU reseat, replacement, or upgrade. So, at the moment, we are still somewhat on the fence about which is better.

Graphite pads are not quite the homerun we had hoped they would be, but that doesn't mean they don't have their place. The question we need to decide is simply whether they are a good idea for our workstations or if the tried and true method of using thermal paste is what we should stick with.