No man-made surface is perfectly smooth, and the tiny gaps between a CPU and a heatsink are usually large enough to have a negative impact on cooling. To combat this, thermal paste is used to fill in these air gaps. The thermal paste itself is not as thermally conductive as metal, however, so it is important that not too much is used. If that happens, the thermal paste will behave more like an insulator than a means of improving thermal performance. 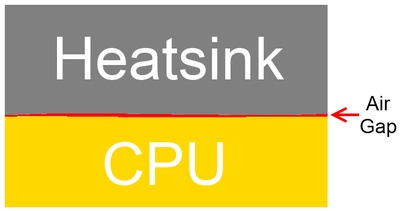 The best technique to apply thermal paste is something that is often debated on the internet, so in this article we want to do our own testing to find the best method for applying thermal paste. First we will see how each technique spreads the thermal paste across the CPU, and then we will test each technique in a full computer system to see which has the best thermal performance.

To get a clear view of how the thermal paste spreads for each technique, and to see if the spread results in any air bubbles, we fabricated a 3/8" thick acrylic plate to act as an interim heatsink. This acrylic plate has portions removed to clear the capacitors around the CPU, and the mounting is the exact same size and spacing as the Corsair H60 CPU Cooler. This way, we can ensure that our results match exactly what you would see when using a real heatsink.

For our thermal testing, we will be using the following components:

CPU temperatures were recorded with a combination of CoreTemp and Speedfan with the temperature reported as the average of the four cores. We let the system idle for at least 45 minutes before recording the idle temperatures, and to put the system under 100% load we ran a combination of both Prime95 and Furmark. Dynamic fan ramping was disabled from the motherboard since we are primarily concerned about the variances in temperature between each application technique and do not want the fan throttling to affect our results.

We are using the built in video controller to help put just a little extra load on the CPU which should accentuate any temperature variances. An open-air test platform was used in place of a chassis since it should allow for more consistent results.

The techniques we are testing come from the common recommended techniques found online as well as a few we devised ourselves. We made sure to apply the paste evenly, but did not make it 100% perfect. We did this on purpose so that our results would be consistent with what you would see in the real world.


Each of these techniques (with the possible exception of the happy face) have some merit to them. The single dot or line should have few air bubbles, but likely will not cover the entire CPU. At the same time, the spiral pattern will likely cover the entire CPU, but may have some air bubbles. To find out, let's take a look at how each technique looked after installing our acrylic heatsink stand-in.

It is almost impossible to see the tiny air bubbles in the images below, so we went ahead and circled them in blue. Larger air bubbles have larger circles, while smaller bubbles have smaller circles. Similarly, any areas where the thermal paste did not cover the CPU are circled in red.


The first thing to point out is that the single dot and line had almost no air bubbles, but they did not spread across the entire CPU. Even doubling the size of the dot still did not cover the entire CPU as the majority of the extra thermal paste simple squirted out the sides. Using three lines instead of one helped with coverage, but resulted in more air bubbles.

Both roughly and smoothly spreading the thermal paste across the CPU had great coverage, but resulted in quite a few small air bubbles. These air bubbles are tiny compared to the circle and spiral shapes and likely to have a minimal effect on performance, but they are definitely present. Spreading the thermal paste perfectly should result in fewer air bubbles, but in our experience it is impossible to get it 100% perfect.

Surprisingly, the X shape resulted in the best overall spread with great coverage and very few air bubbles. This surprised us a bit, but makes perfect sense when you think about it. The X shape allows the paste to spread equally across the CPU, and since the spread is from the inside out, the shape helps prevent air pockets from becoming trapped.

Unfortunately, the happy face did not have great coverage and resulted in a few relatively large air bubbles. But the biggest factor for each technique is how well each actually cools the CPU, so let's take a look at our thermal testing results: 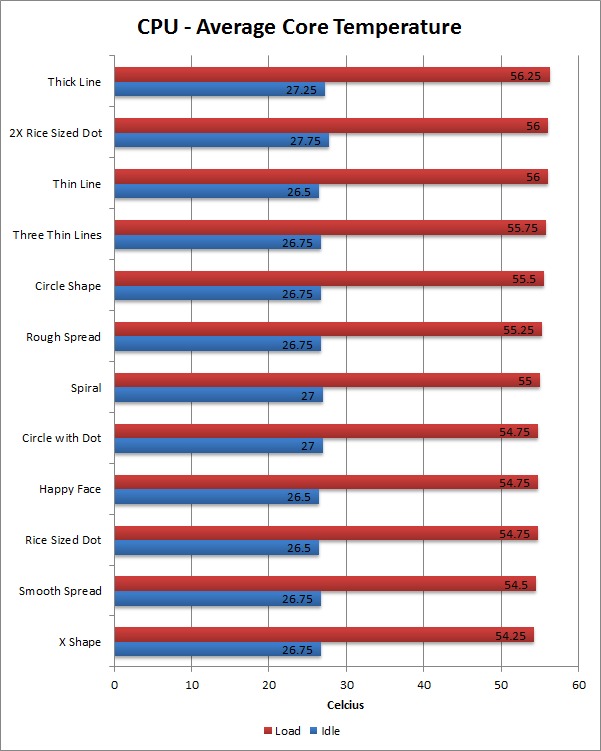 Overall, the thermal results are pretty close to what we expected given our spread testing. The X shape, with the best coverage and fewest air bubbles, performed the best at 54.25°C under full load. The smooth spread was close behind and was only .25 °C hotter under full load. Surprisingly, the rice sized dot tied with both the happy face and the circle with dot for third place at 54.75 °C.

Interestingly, the 2x rice sized dot and thick line – both of which had quite a bit of excess thermal paste that got squeezed out from between the CPU and the heatsink – did the worst in the thermal testing. This reinforces the idea that, just like too little thermal paste, too much thermal paste can result in sub-standard performance. 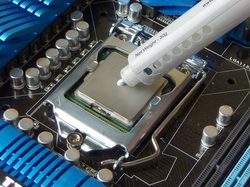 For years, we at Puget Systems have used either the rice sized dot or the smooth spread technique in our builds depending on the system requirements. Smoothly spreading the thermal paste takes time and effort to get exact, however, so the fact that our testing shows a simple X shape performing even better is absolutely great news. Not only is it a much simplier application technique, it is also much easier to keep consistent. And for those that are wondering, it works just as well on larger CPUs like the Intel socket 2011 CPUs. The thickness of the line just needs to be very slightly increased, and the X shape should be extended to cover the entire face of the CPU.

Perhaps our most interesting result is that if you are going to use the tried-and-true rice sized dot, you might as well have a bit of fun and draw a little happy face instead. Not only does it cool just as well, but you can rest easy knowing that you have a happy, smiling CPU underneath your heatsink. 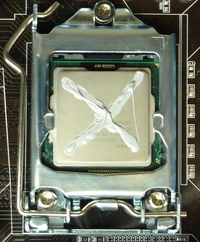