Skip to content
Always look at the date when you read an article. Some of the content in this article is most likely out of date, as it was written on January 26, 2021. For newer information, see our more recent articles.

TL;DR: NVIDIA RTX A6000 48GB performance in After Effects

Ever since After Effects 2015.3, Adobe has been steadily adding support for GPU acceleration which has made the video card an increasingly important part of an After Effects workstation. However, most of After Effects is still limited by the performance of your CPU, which means that many users will stick with a relatively moderate GPU in order to spend more of their budget on their system's processor. This likely makes the new NVIDIA RTX A6000 complete overkill for After Effects, but the only way to know for sure is to test it to find out. 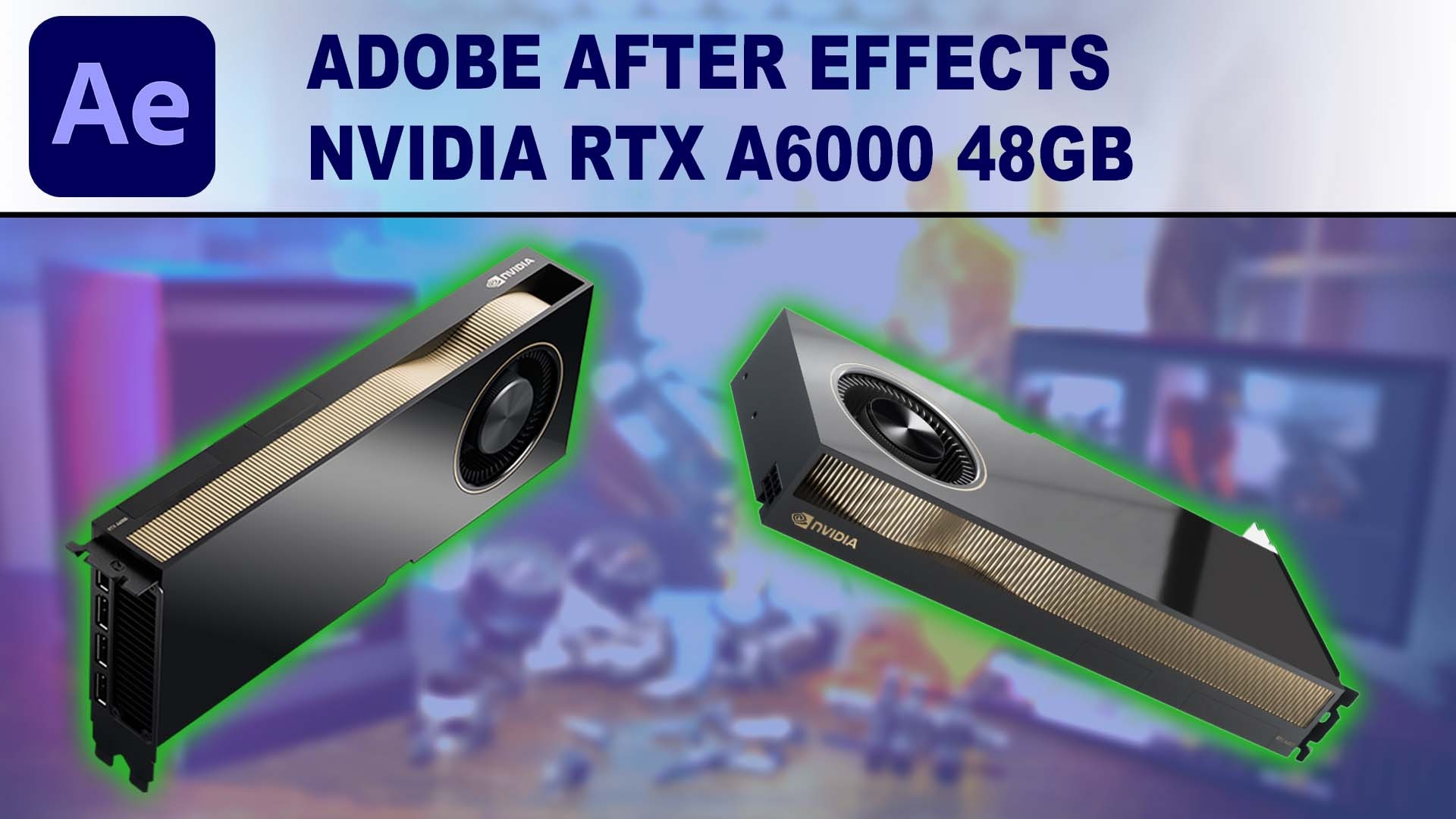 While specs rarely line up with real-world performance, the biggest thing to note is that the RTX A6000 includes 48GB of VRAM at a lower cost than the Quadro RTX 8000, and theoretically has more than twice the performance of any of the previous generation cards. As we said early, we don't expect this to translate into much for After Effects itself, but for those that need high amounts of VRAM and GPU performance (such as workflows that include 3D Rendering with engines like OctaneRender or RedShift), this card may be well worth its cost.

To see how the RTX A6000 performs, we will be comparing it to most of the mid to high-end NVIDIA Quadro GPUs from the previous generation as well as the Quadro P6000 from two generations ago. One thing to note is that we are not going to test the Quadro RTX 8000 since, in terms of performance, it is actually identical to the Quadro RTX 6000. The RTX 8000 does have more VRAM than the RTX 6000 (48GB vs 24GB), but since our After Effects benchmark doesn't need much in the way of VRAM, that would not affect the results for our benchmark.

In addition, we are only including two Radeon Pro GPUs: the Radeon Pro WX 9100 and Radeon Pro VII which are currently the top-end workstation GPUs from AMD. NVIDIA tends to hold a commanding lead in applications like After Effects, but including these two cards will let us see if there are any surprises since the last time we tested workstation cards in After Effects. 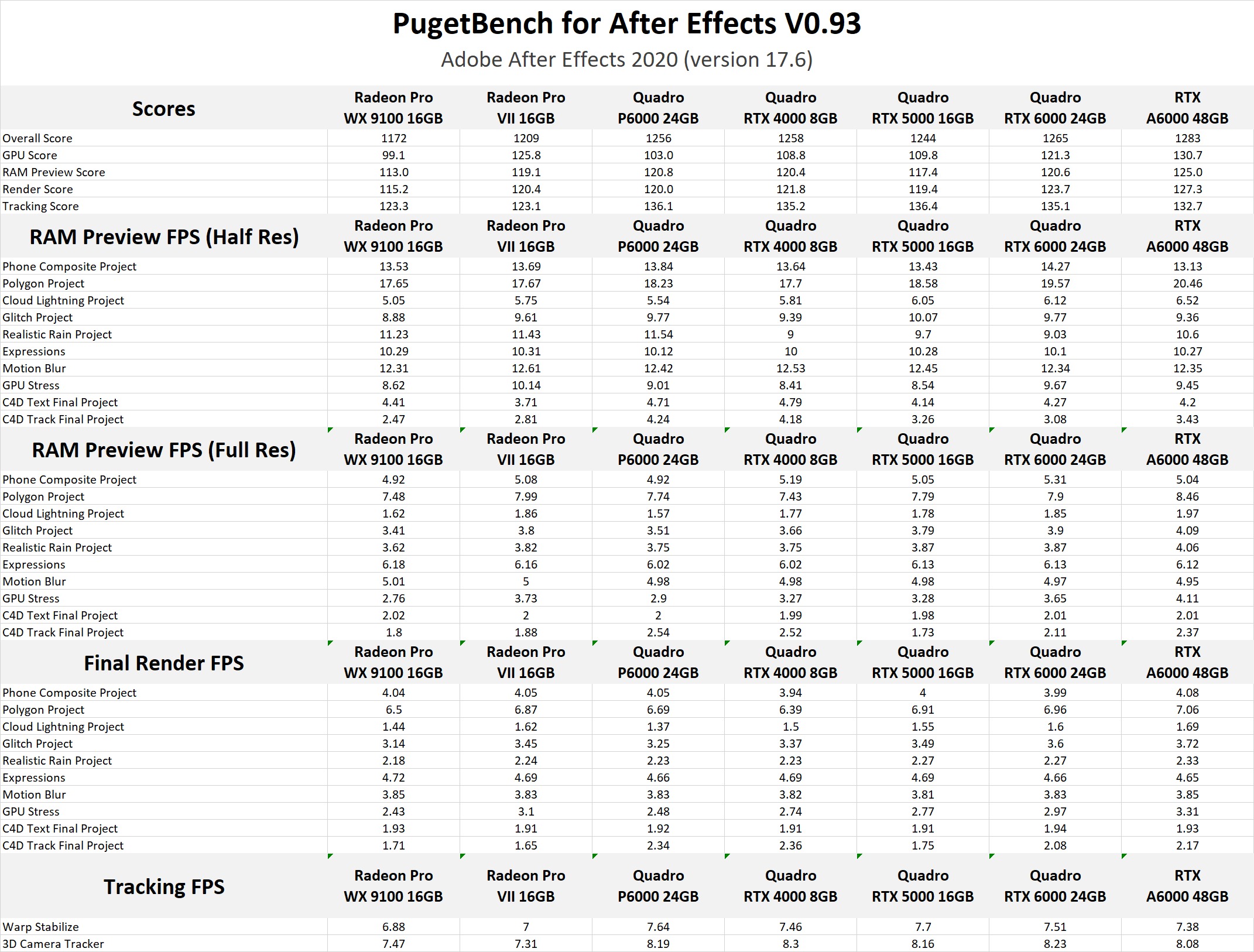 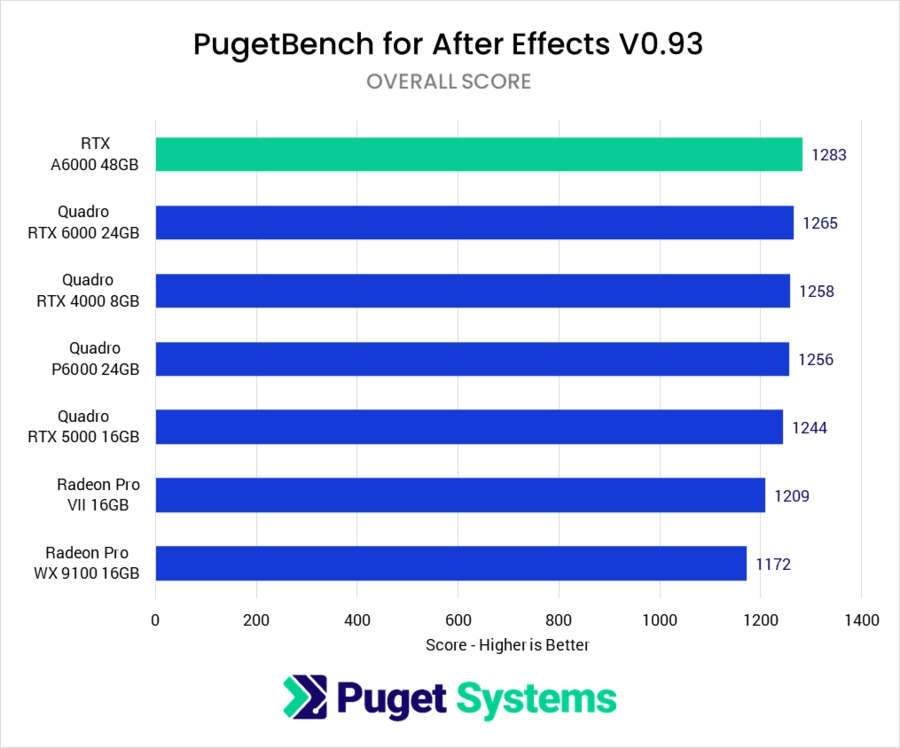 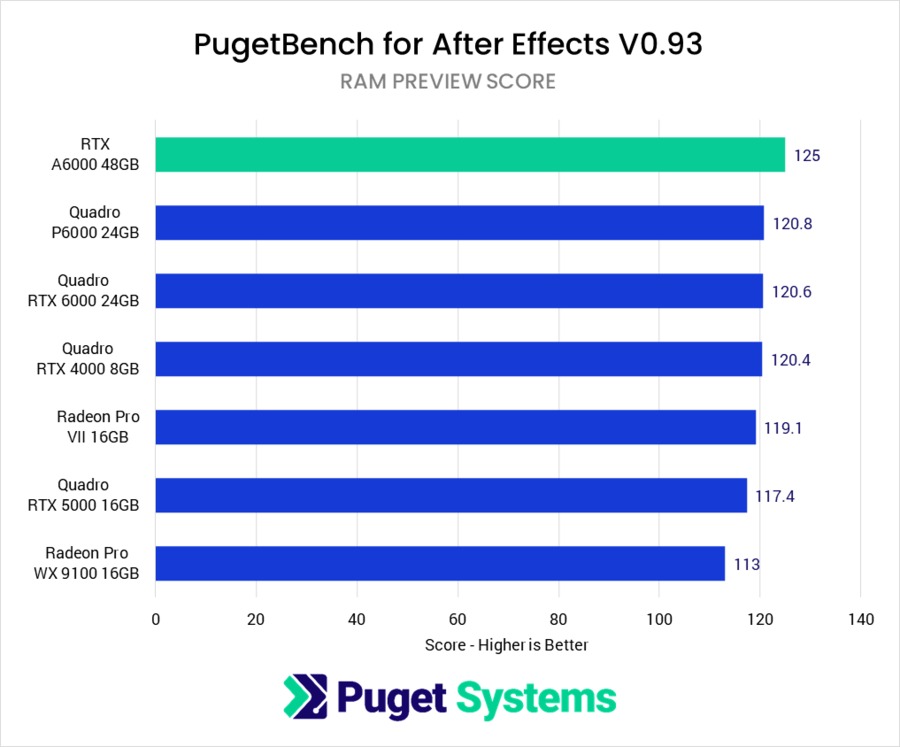 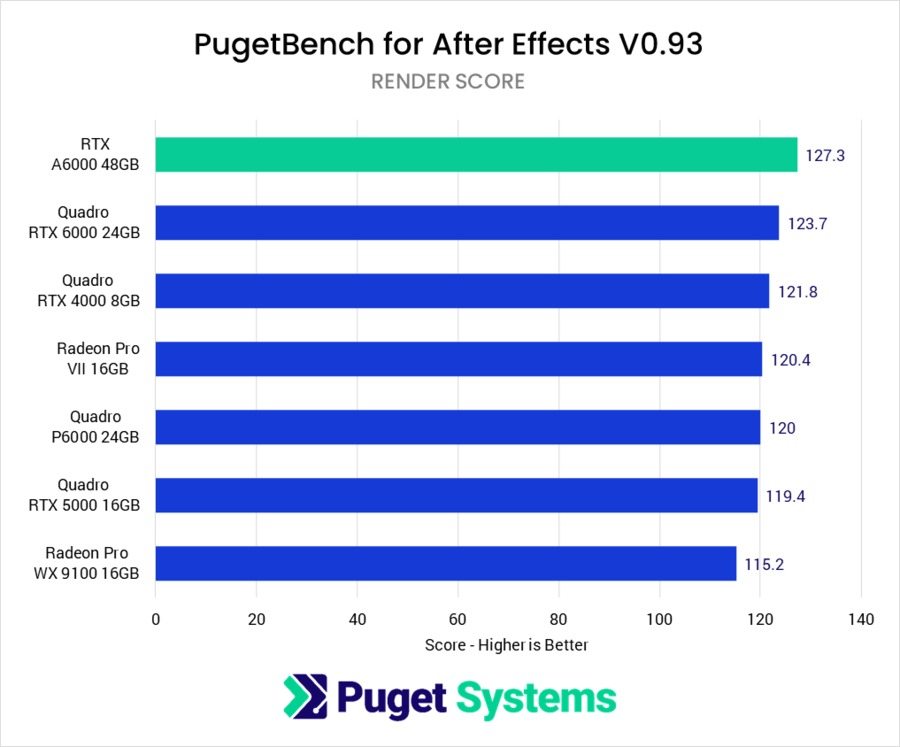 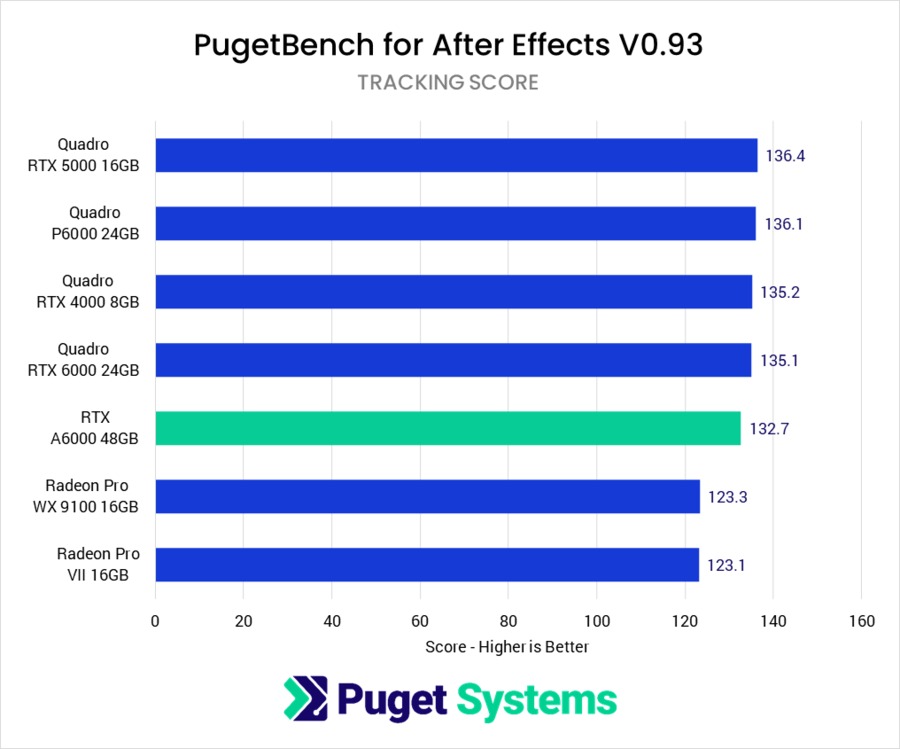 Looking at the Overall Score, the NVIDIA RTX A6000 does top out the chart, although the performance is not significantly different than the other NVIDIA workstation cards. Between the fastest and slowest NVIDIA GPUs we tested, the difference was just a hair over 3% which is just within the margin of error for real-world testing like this. 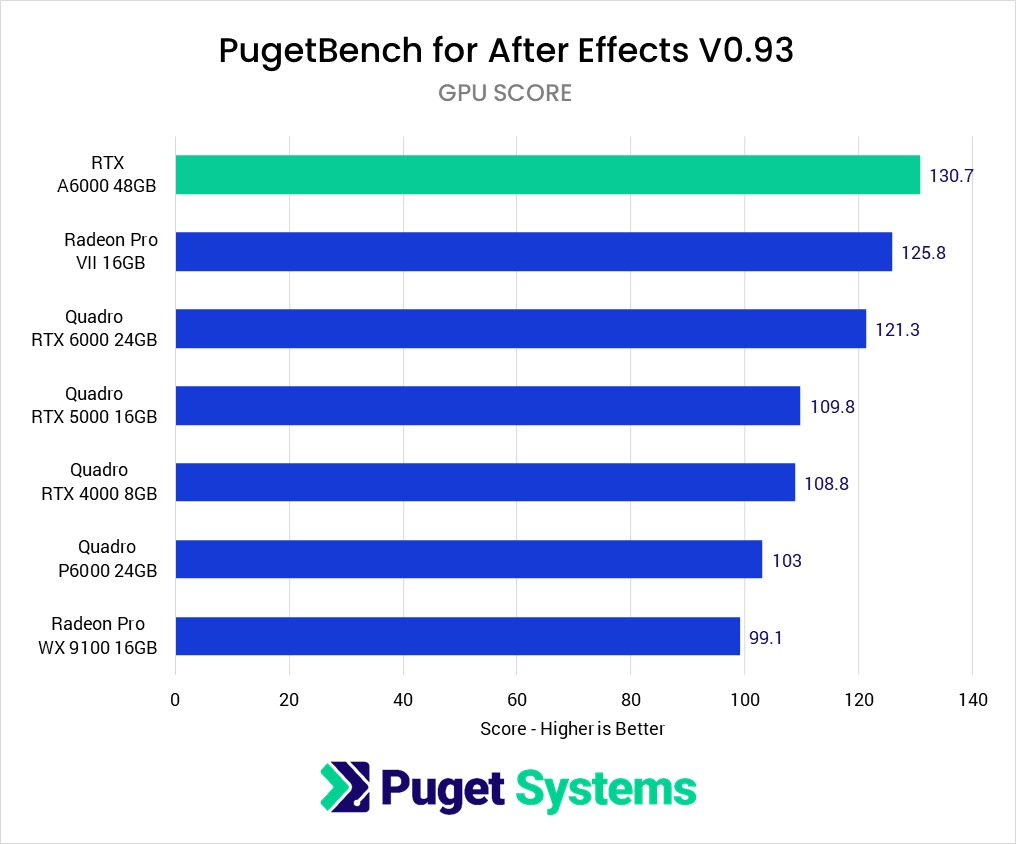 We again want to point out that workstation cards like the RTX A6000 are not solely about performance, but for those that want to know how it performs relative to the NVIDIA GeForce line, you can compare it to the results in our recent Adobe After Effects – AMD Radeon RX 6900 XT Performance article. In terms of just straight-up performance, the GPU score of ~131 for the RTX A6000 puts it about in line with a GeForce RTX 3070 (only with six times the VRAM, higher reliability, and all the other workstation-only features).

Something else interesting is that the AMD Radeon Pro VII did extremely well for this portion of our test. Pricing wise, it falls between the Quadro RTX 4000 and RTX 5000, but was about 15% faster than either of those cards. It still has the issue with tracking performance, however, so using it over an NVIDIA card may come down to whether you want to prioritize performance for tracking or for GPU effects.

How well does the NVIDIA RTX A6000 48GB perform in After Effects?

In most cases, unless you need the 48GB of VRAM (which shouldn't be necessary for the vast majority of After Effects workflows), the "sweet spot" for an NVIDIA workstation GPU is likely either the RTX 4000 8GB or RTX 5000 16GB depending on how much VRAM you need. However, the biggest reason to invest in a higher-end GPU is not for the higher performance in After Effects, but for rendering engines like OctaneRender or Redshift that you might utilize in your workflow. These engines tend to scale very well with more powerful GPUs, and having a GPU with a ton of VRAM can also be incredibly important.

As always, keep in mind that these results are strictly for After Effects. If you have performance concerns for other applications in your workflow, we highly recommend checking out our Hardware Articles (you can filter by "Video Card") for the latest information on how a range of applications perform with the new GPUs from AMD and NVIDIA, as well as with different CPUs and other hardware.