Skip to content
Always look at the date when you read an article. Some of the content in this article is most likely out of date, as it was written on January 25, 2021. For newer information, see our more recent articles.

While the new NVIDIA RTX A6000 performs just fine in Photoshop, the GPU is a very low priority when designing a Photoshop workstation. It is very important to have a supported GPU, but all the cards we tested performed overall within the margin of error for our benchmark, so there is no reason to invest in a higher-end GPU for Photoshop. At most, if you have a GPU that is a few generations old, you may see up to about a 10% increase in performance with the RTX A6000 for the portions of Photoshop that utilize the GPU, but that is a small increase in performance relative to the cost of a workstation card like the RTX A6000.

Photoshop is an interesting application to use to test GPU performance since while it does boast a number of effects that utilize the GPU, these effects tend to perform roughly the same regardless of what GPU is in your system. Because of this, we don't expect to see a significant gain in performance with the new RTX A6000 in Photoshop, but it is always worth testing to find out if there are any surprises. 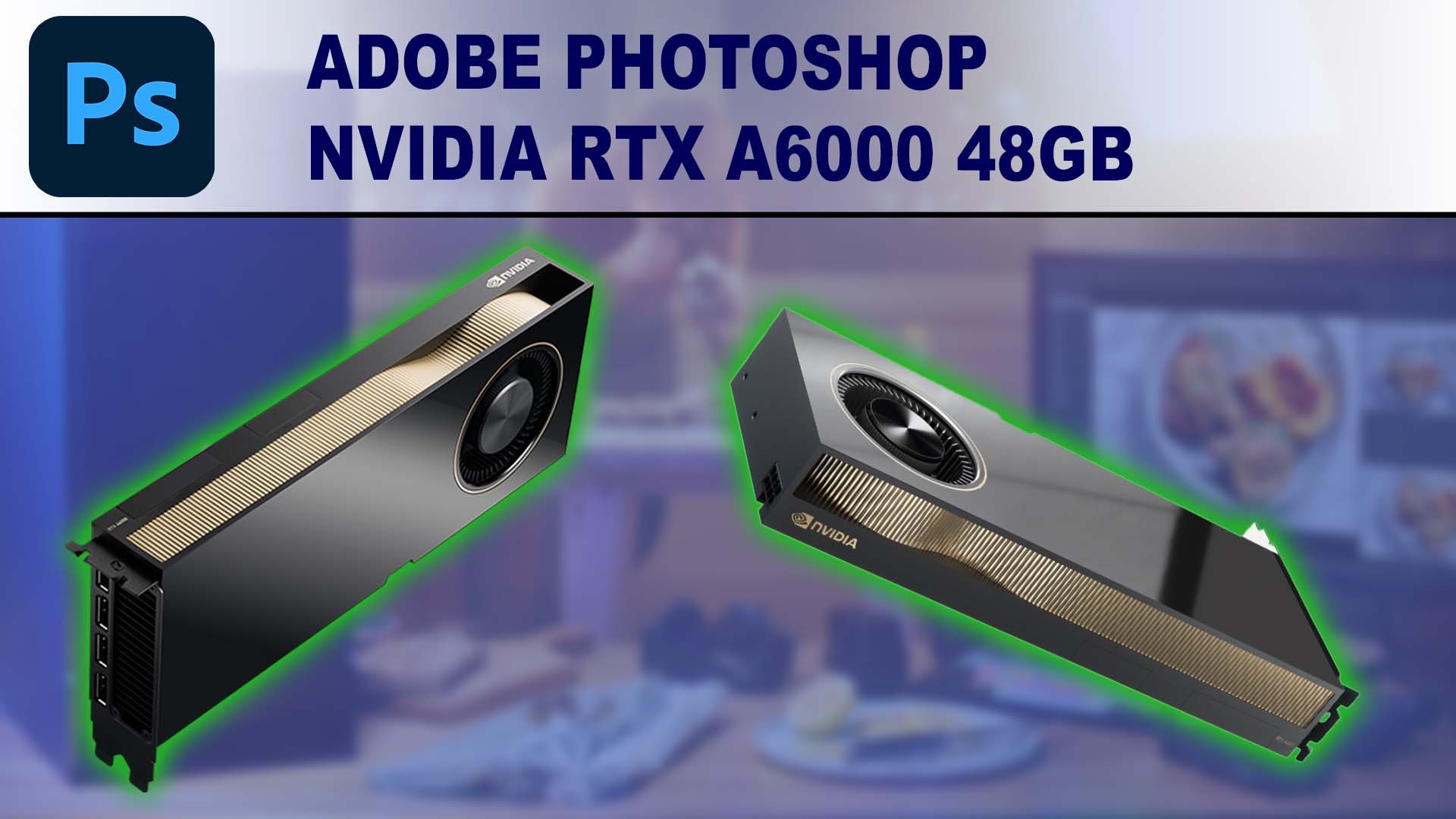 While specs rarely line up with real-world performance, the biggest thing to note is that the RTX A6000 includes 48GB of VRAM at a lower cost than the Quadro RTX 8000, and theoretically has more than twice the performance of any of the previous generation cards. As we said early, we don't expect this to translate into much for Photoshop, but for those that need high amounts of VRAM and GPU performance (such as 3D Rendering workflows), this card is very impressive on paper.

To test each GPU, we will be using one of the fastest platforms currently available for Photoshop – most notably the AMD Ryzen 5950X. Since Photoshop utilizes the CPU so heavily, this should minimize the impact of the processor and allow each GPU to perform at its fullest potential. Even with this, however, be aware that there typically isn't much variation in performance between different video cards.

To see how the RTX A6000 performs, we will be comparing it to most of the mid to high-end NVIDIA Quadro GPUs from the previous generation as well as the Quadro P6000 from two generations ago. One thing to note is that we are not going to test the Quadro RTX 8000 since in terms of performance, it is actually identical to the Quadro RTX 6000. The RTX 8000 does have more VRAM (48GB vs 24GB), but since our Photoshop benchmark doesn't need much in the way of VRAM, that would not affect the results for our benchmark.

In addition, we are only including two Radeon Pro GPUs: the Radeon Pro WX 9100 and Radeon Pro VII which are currently the top-end workstation GPUs from AMD. NVIDIA tends to hold a commanding lead in applications like Photoshop, but including these two cards will let us see if there are any surprises since the last time we tested workstation cards in Photoshop. 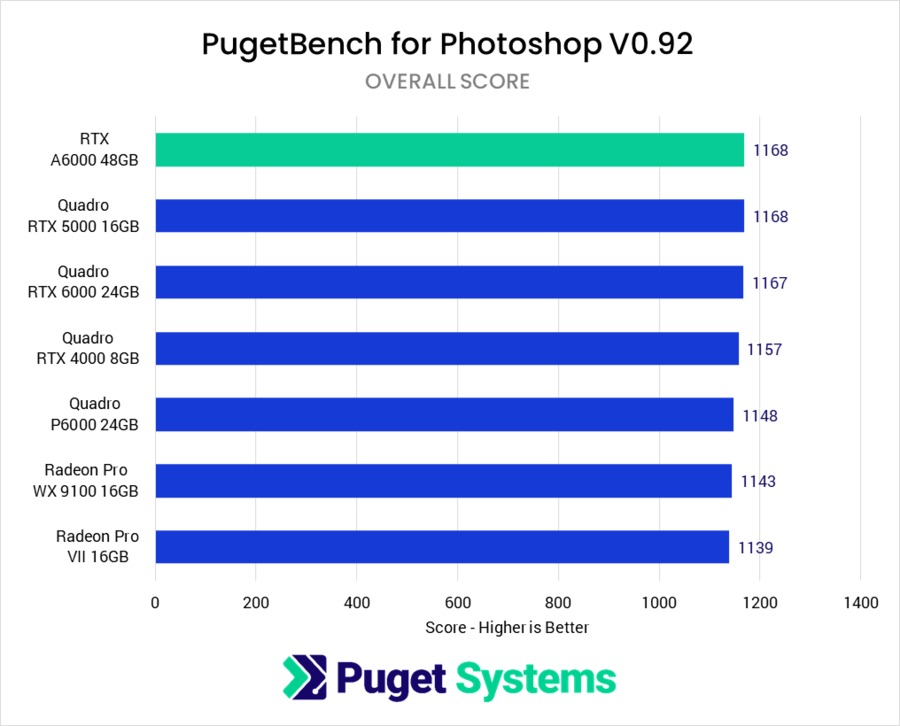 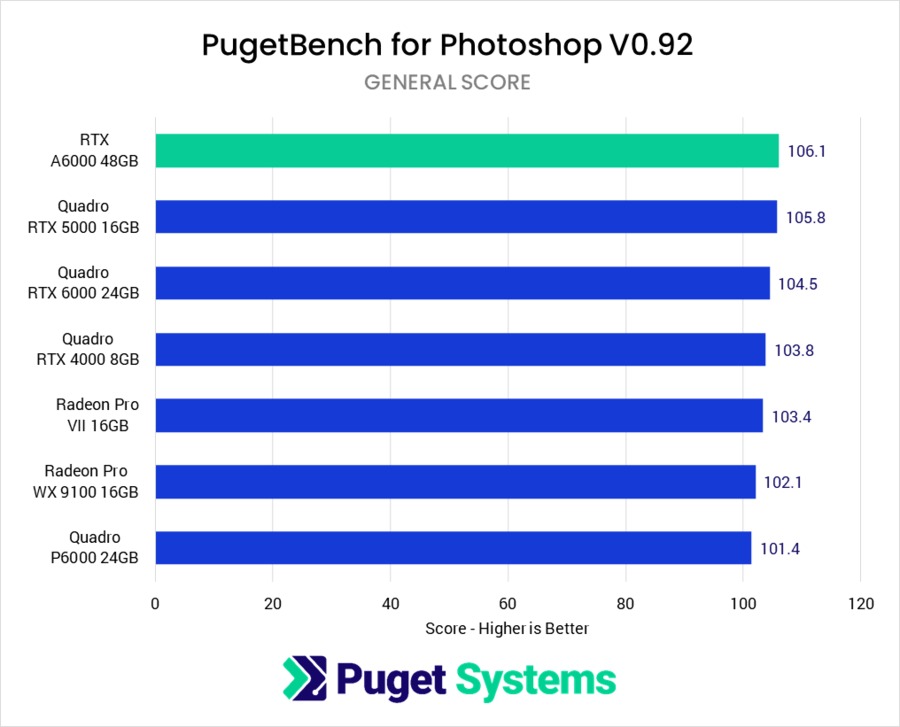 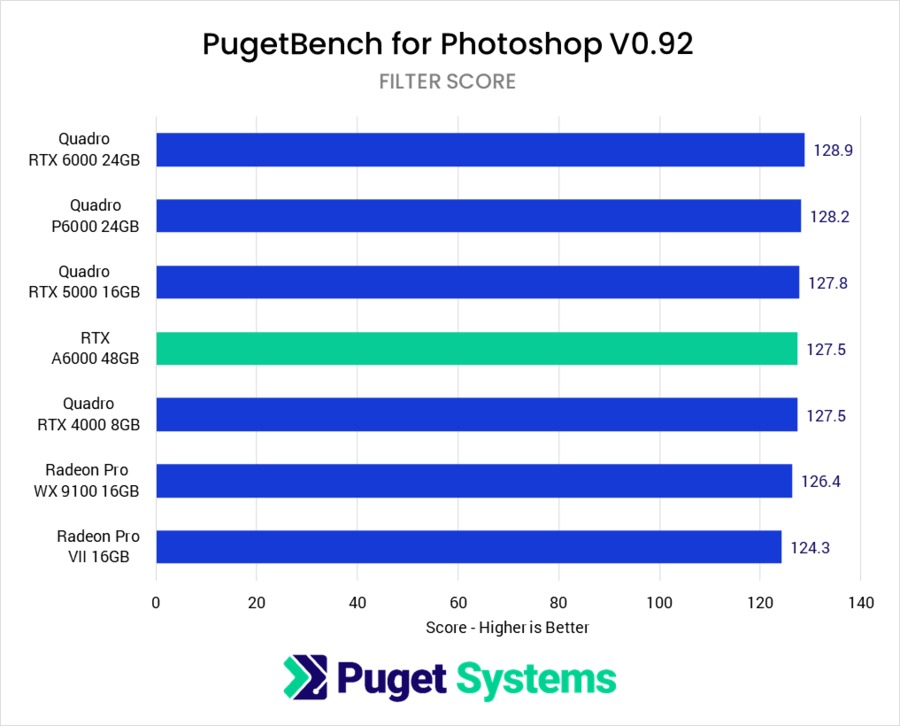 As you can see in the chart above, there is minimal difference between any of the GPUs we tested. Between the "fastest" and "slowest" cards, we only saw a 2.5% difference in performance, which is well within the margin of error for real-world testing like this. We have found in previous testing that having a GPU does increase performance by ~10% over onboard graphics, but a GPU with more raw horsepower doesn't result in significantly higher performance than a more modest GPU.

The "General Score" does show a bit more of a variation in performance, but even there the largest score differential is under 5% which isn't enough to draw any meaningful conclusions from. However, our benchmark does make a "GPU Score" based on the tests that are GPU accelerated, which should (in theory) be able to show more of a difference between each card. 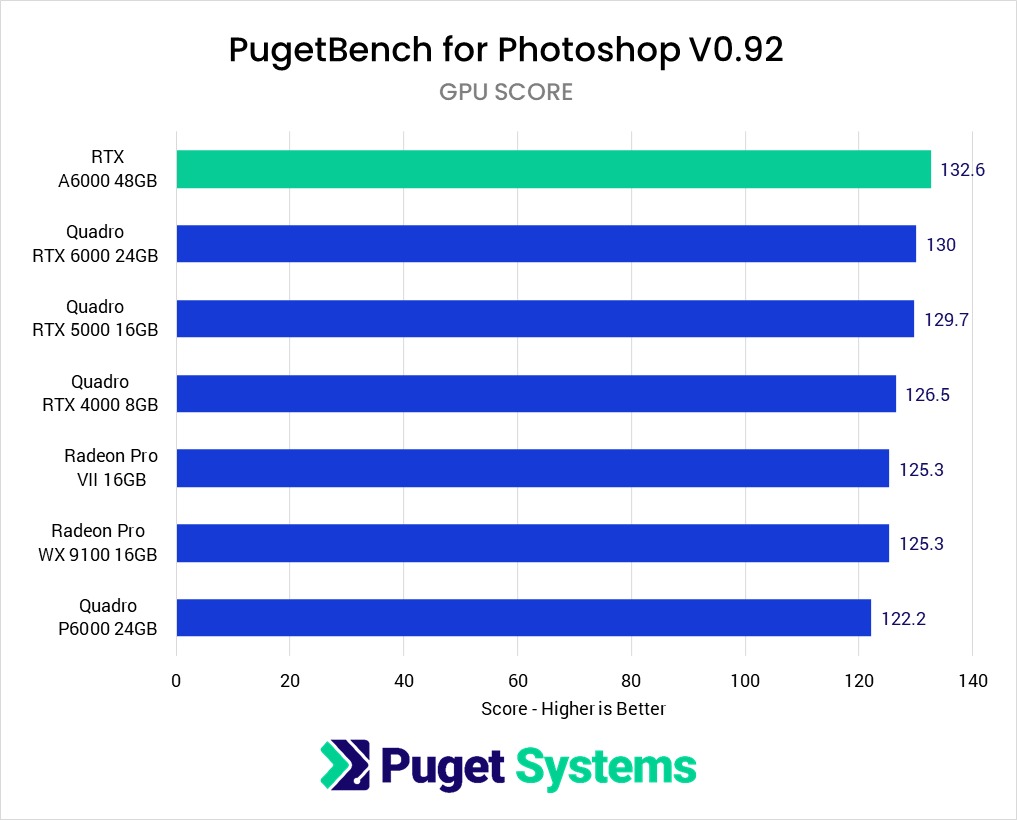 Even with limiting the results to just the GPU accelerated portion of Photoshop we test, the RTX A6000 is still essentially the same as the previous generation Quadro RTX 6000 as the difference is only about 2%. Compared to the Quadro P6000 from two generations ago, however, we do see about an 8.5% improvement in performance.

How well does the NVIDIA RTX A6000 48GB perform in Photoshop?

While the new NVIDIA RTX A6000 performs just fine in Photoshop, the GPU is a very low priority when designing a Photoshop workstation. It is very important to have a supported GPU, but all the cards we tested performed overall within the margin of error for our benchmark, so there is no reason to invest in a higher-end GPU for Photoshop. At most, if you have a GPU that is a few generations old, you may see up to about a 10% increase in performance for the portions of Photoshop that utilize the GPU, but that is a small increase in performance relative to the cost of a workstation card like the RTX A6000.

As always, keep in mind that these results are strictly for Photoshop. If you have performance concerns for other applications in your workflow, we highly recommend checking out our Hardware Articles (you can filter by "Video Card") for the latest information on how a range of applications perform with the new GPUs from AMD and NVIDIA, as well as with different CPUs and other hardware.