Written on October 13, 2017 by Matt Bach
Share:
We have a newer article available looking at the the performance of the Core i9, Xeon W, and Dual Xeon SP platforms:  DaVinci Resolve 14 GPU Scaling: Core i9 vs Xeon W vs Dual Xeon SP
Table of Contents

Today, we have published our first two articles for DaVinci Resolve. This article will be looking at how performance changes with different models of CPUs while out other article will be looking at GPU scaling performance with 1-4 NVIDIA Titan Xp video cards. There is quite a bit more we want to test, but this is an excellent start and will allow DaVinci Resolve users to give us feedback on our test process that we can leverage in future articles. Plus, we wanted to get these articles up before we left for the NAB Show in New York next week (Oct 17-18, 2017). Come visit us at booth N570 in the "Post + Production Pavilion" of Hall 3B if you happen to be attending!

Similar to most other post production software, DaVinci Resolve should benefit from having a CPU with a relatively high core count. In this article, we will be looking at a range of Intel Core i7/i9 Skylake-X CPUs with between 8 and 18 cores as well as the 12 and 16 core AMD Threadripper CPUs. Depending on the results we find, we may expand our testing in the future to include the new Intel Coffee Lake 6 core CPUs or even dual Xeon configurations.

While our GPU scaling analysis article found that multiple video cards really only make a difference when using things like temporal noise reduction, we went ahead and used three NVIDIA Titan Xp video cards for our testing. Most of our results should be roughly identical to what we would get with just a single GPU, but we feel it is a good idea to ensure we are not bottlenecked by the GPU since we are comparing CPU performance in this article. For users of the free edition of DaVinci Resolve, this does mean that almost everything short of the color grading "torture" test should directly apply to you even though the free edition only supports a single GPU. 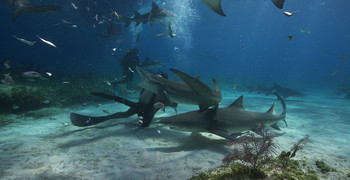 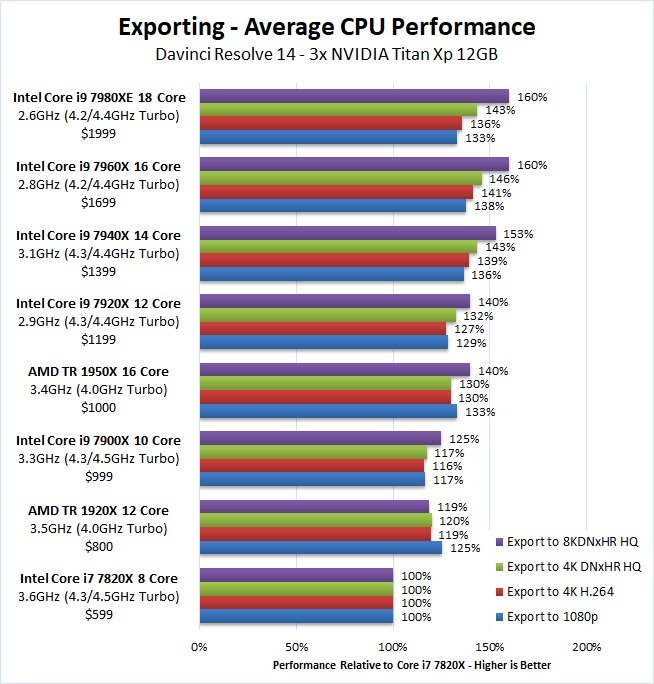 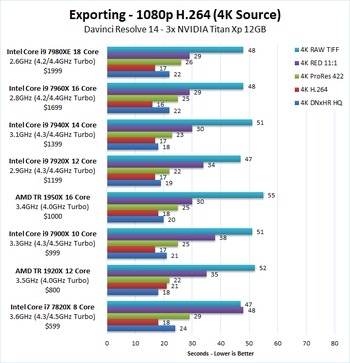 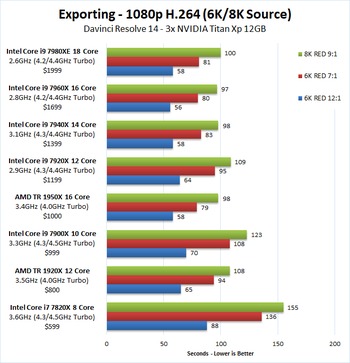 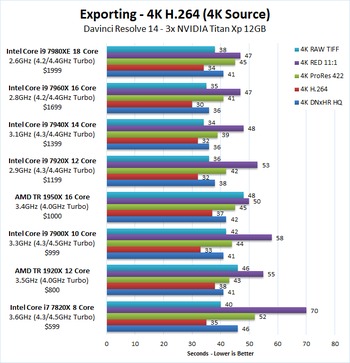 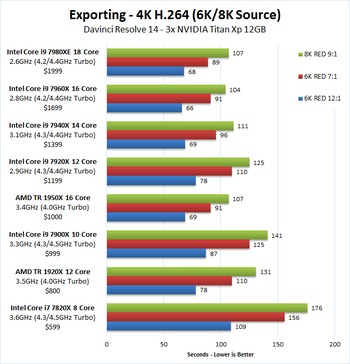 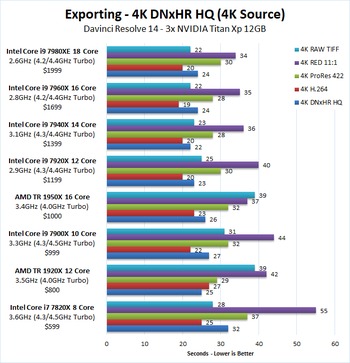 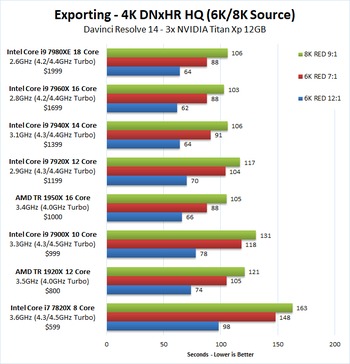 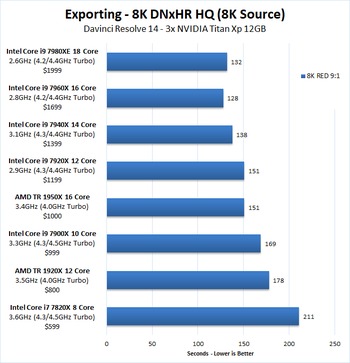 Our testing was fairly extensive with around 175 data points, so while the actual results in seconds are available if you click on the "Show Raw Results" link, what we will mostly be looking at is the average performance relative to the Core i7 7820X. If there is a specific type of footage you tend to work with, we highly recommend taking a look at the raw results to get a more accurate idea of what you may see rather than just the average.

Overall, the results are very interesting. AMD's Threadripper CPUs did very well for their price, typically beating the similarly priced Intel CPUs by a few percent. There were a few times AMD beat Intel by a larger margin, but there were also times when Intel was faster than AMD so all in all we would give a slight edge to AMD at that price bracket. For the best possible performance, however, Intel definitely holds the lead at the top end.

This is also an indication that a dual Xeon workstation may not be great for Resolve given the high core counts we now have available on a single CPU. Dual Xeon workstations allow for even higher core counts, but each individual core tends to run at a lower frequency. This, combined with the additional overhead associated with dual CPU setups, makes it very likely that a Core i9 7960X is going to be faster than any dual Xeon workstation no matter how much money you throw at it. 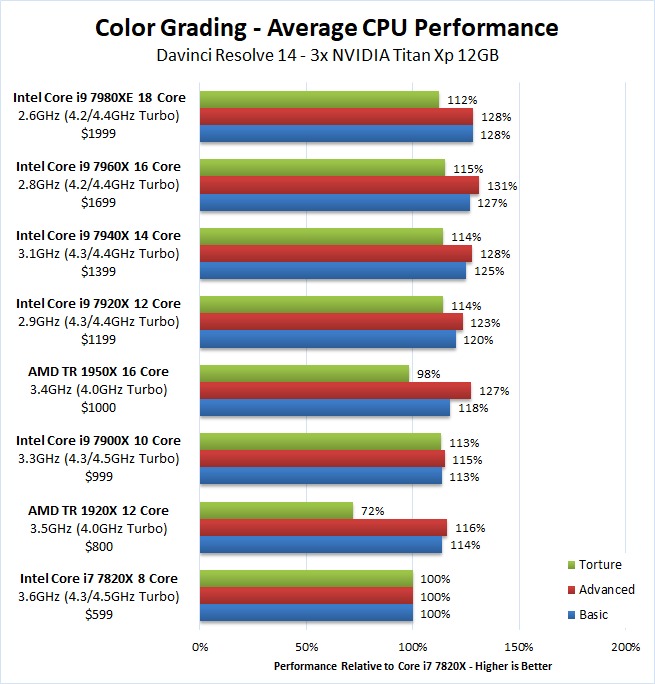 [-] Hide Raw Results
The X-axis on the charts below should read "FPS - Higher is Better". We will upload new charts as soon as we are able. 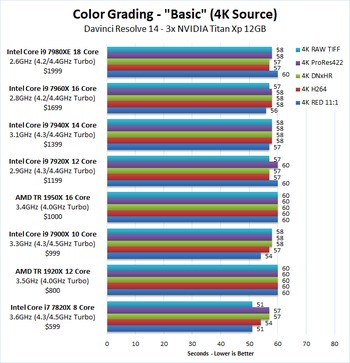 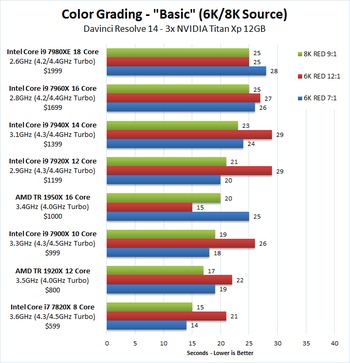 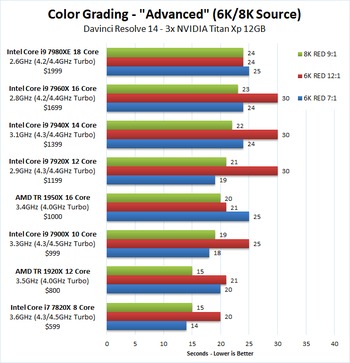 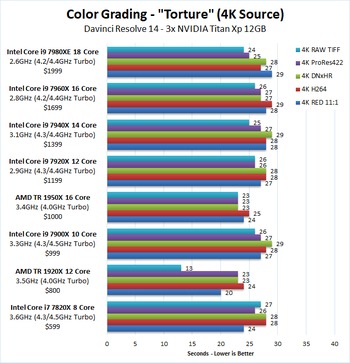 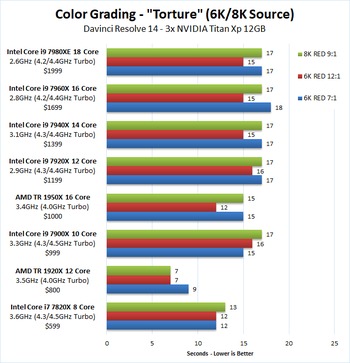 Just like in the previous section, the chart above is formatted based on the performance relative to the Core i7 7820X. If you want to see the raw results in seconds, just click on the "Show Raw Results" link.

Starting with the AMD vs Intel question, the two AMD Threadripper CPUs did pretty well in our "basic" and "advanced" grading tests performing right in line or slightly ahead of the Intel CPUs. Where they really fell behind was in our "torture" test that included temporal noise reduction. In those tests, the AMD CPUs fell significantly behind even the Core i7 7820X 8 core CPU.

Overall, for our "basic" tests there was a small but consistent gain in performance when using a more powerful CPU. It isn't much in most cases, but it is there. On the "advanced" and "torture" tests, however, we definitely hit a performance wall right around the $1000 mark. As we noted, AMD falls behind in the "torture" test, but with the Intel CPUs you are only going to see minimal performance gains above the 14 core mark. There is still a small gain with the Core i9 7960X 16 core, but actually a performance drop with the Core i9 7980XE 18 core.

Looking at a broad overview of our testing and only separating based on whether we were exporting or color grading, we see the following performance from each CPU: 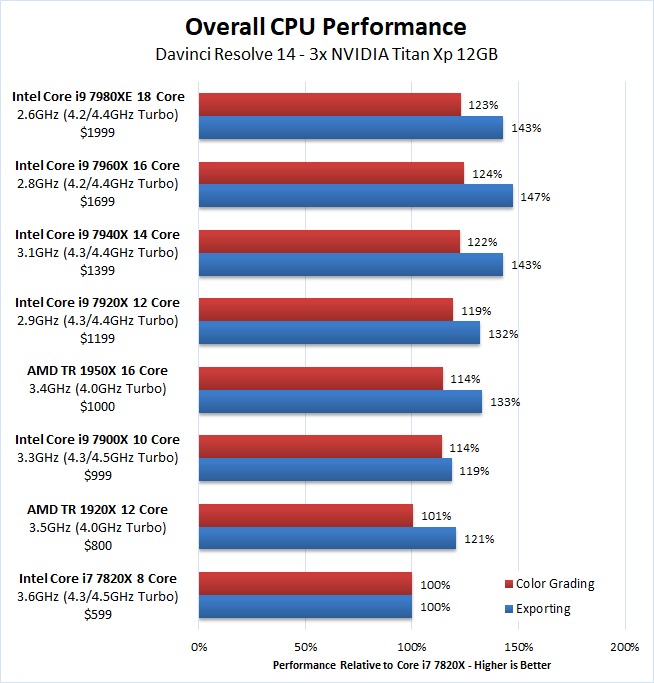 Overall, the results are pretty straight-forward. If you spend more money, you will likely get at least a small gain in performance. There are things not shown in this chart (such as the poor AMD performance when using temporal noise reduction) but this is about as simple as a performance chart gets. So really the question of Intel Skylake-X vs AMD Threadripper comes down to whether you use things like temporal noise reduction (TNR) and your overall budget. If you do us TNR, Intel is clearly the better choice. If you don't, then we would rate both Intel and AMD as being pretty roughly the same at similar price points. Intel has the performance lead with their more expensive Core i9 7940X and Core i9 7960X, however, so if your budget can afford it those CPUs are an excellent choice.

One point we want to make sure to call out is that we didn't see any benefit to using the Core i9 7980XE 18 core. In almost every case, the Core i9 7960X 16 core was actually faster. There may be an argument for the 7980XE from a multi-tasking standpoint, but even then having two more cores likely isn't worth the 4% drop in FPS when color grading.

As we noted in the Introduction, this is just the first of many articles looking at performance in DaVinci Resolve and there is still a lot we want to test including exporting all the color graded clips in addition to our test timeline, adding motion tracking, testing the performance impact of using a Decklink display out card, and much more. If you think there is something else we should include, we encourage you to let us know in the comments. Especially if you are able to send us an example project, we have found that active communication with the community to be incredibly valuable as it helps us shape our testing to match exactly the type of work that real users do every day.