Skip to content
Always look at the date when you read an article. Some of the content in this article is most likely out of date, as it was written on January 6, 2021. For newer information, see our more recent articles.

While gaming is almost always a major focus during these GPU launches, professional applications like DaVinci Resolve are becoming more and more important. In fact, if you view the product page for the 6900 XT, you will note that they are starting to include Content Creation performance from benchmarks like our very own "PugetBench for Premiere Pro". 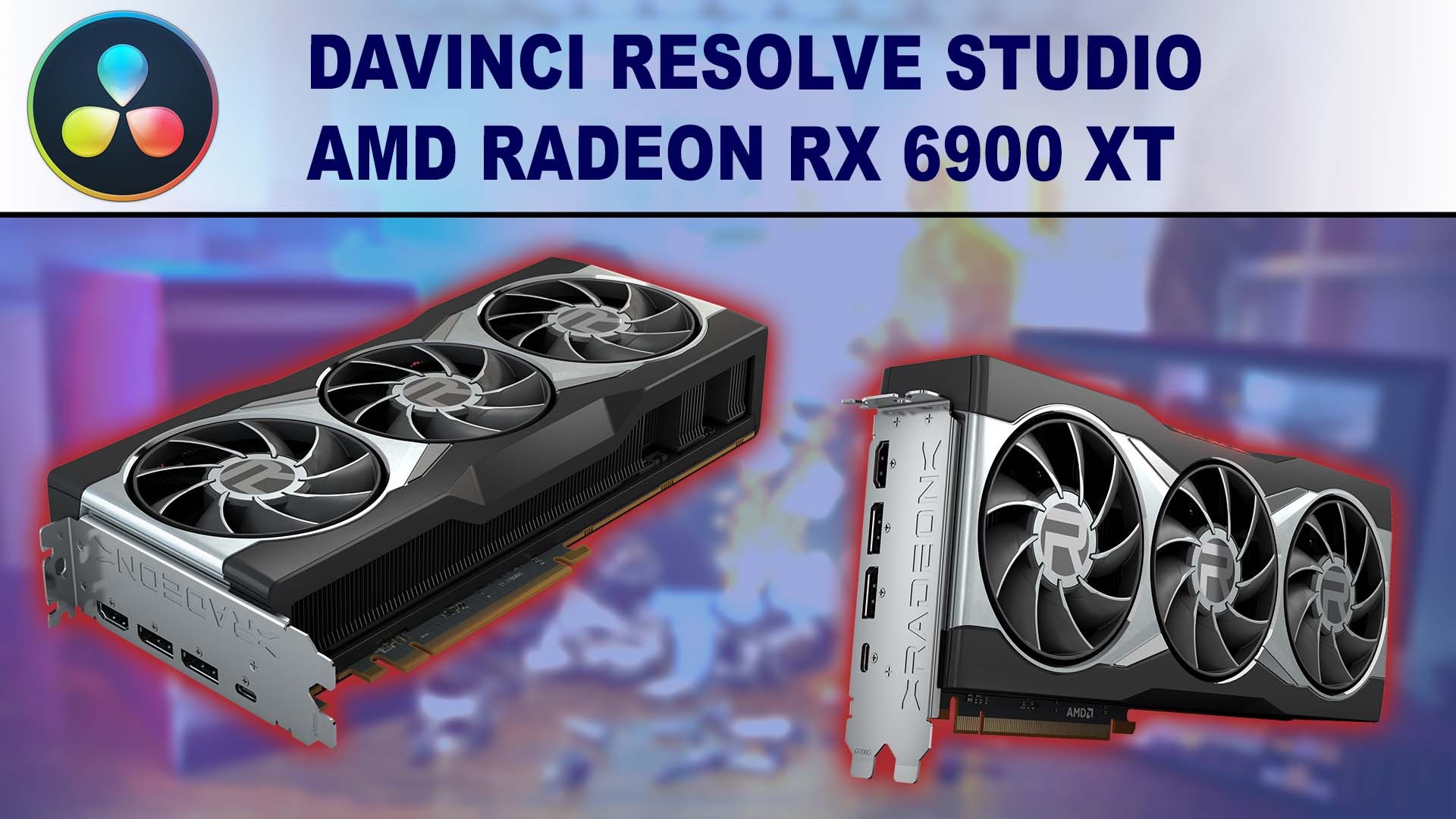 However, something else important to notice is that the Radeon 6000 series cards have a ton of VRAM for their price. Unfortunately, even 8GB of VRAM is usually plenty for most 4K timelines, but even 16GB is not quite enough if you want to work with 8K timelines. For that, we typically find that you want a GPU with at least 20GB of VRAM which largely limits you to the RTX 3090 24GB or workstation-class cards like Quadro and Radeon Pro. Still, the extra VRAM can be useful for those that tend to use multiple noise reduction nodes, a lot of OpenFX, and complicated grading node structures on 4K/6K timelines.

We will be using the "Extended" preset that includes both 4K, 8K media as well as specific GPU Effects and Fusion tests. Using 8K media with most of these GPUs (including the 6900 XT) is actually not a good idea due to the "out of GPU memory" errors you would likely encounter, but our benchmark does not load the Resolve UI which means that the VRAM load is much lower; allowing GPUs with just 8GB of VRAM to successfully complete the 8K tests. 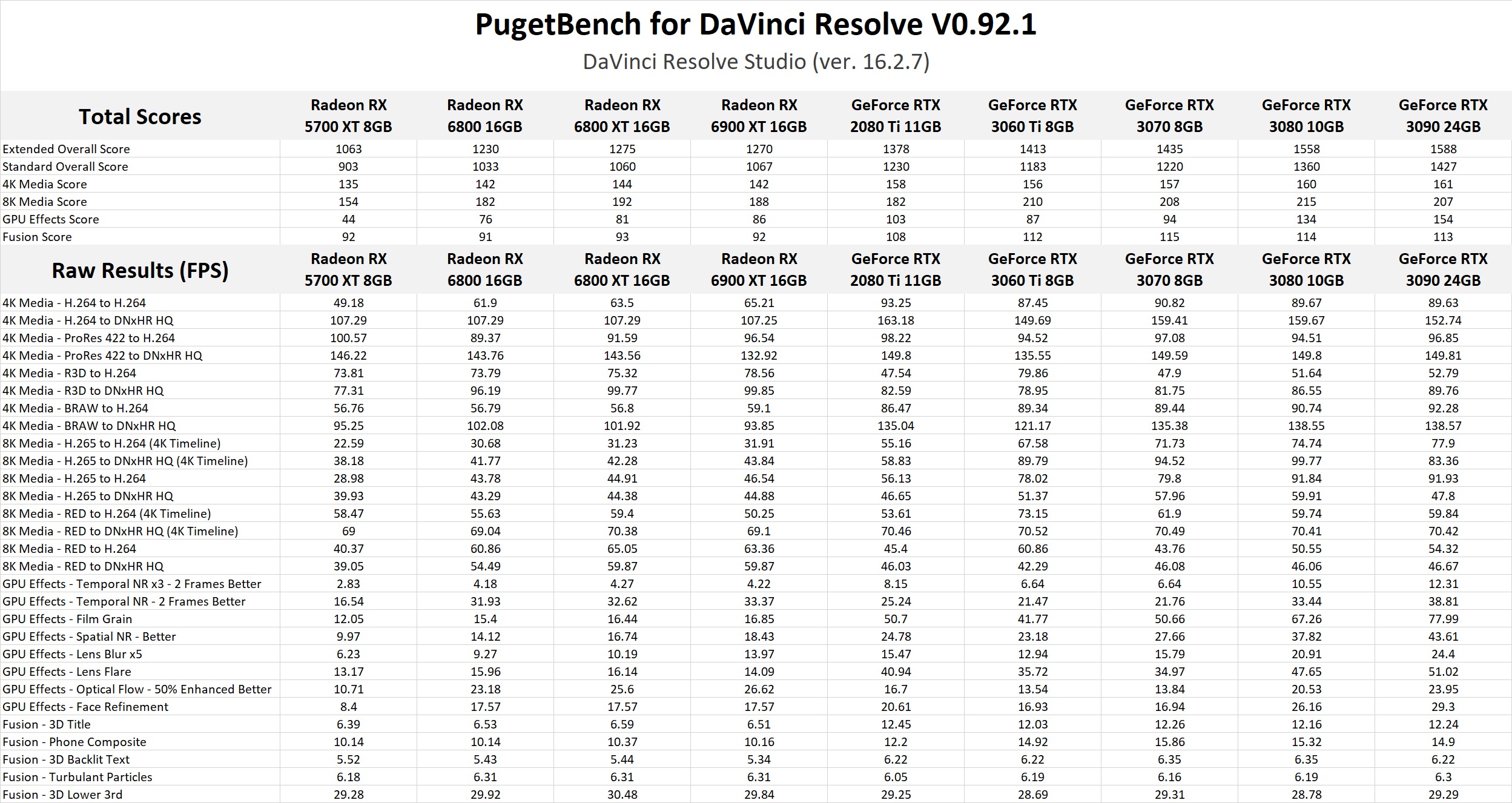 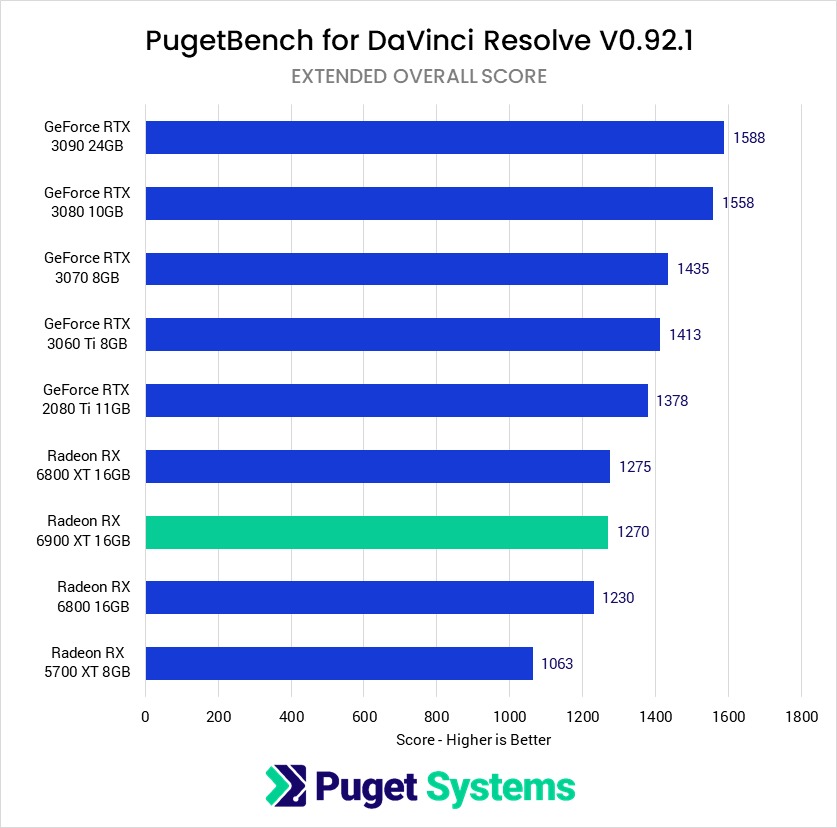 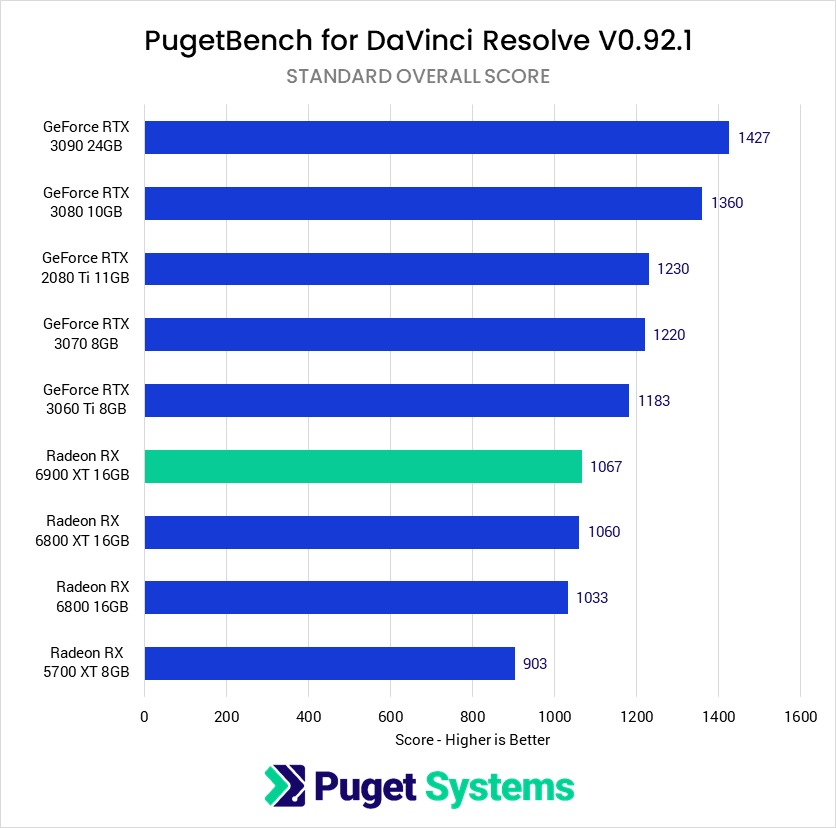 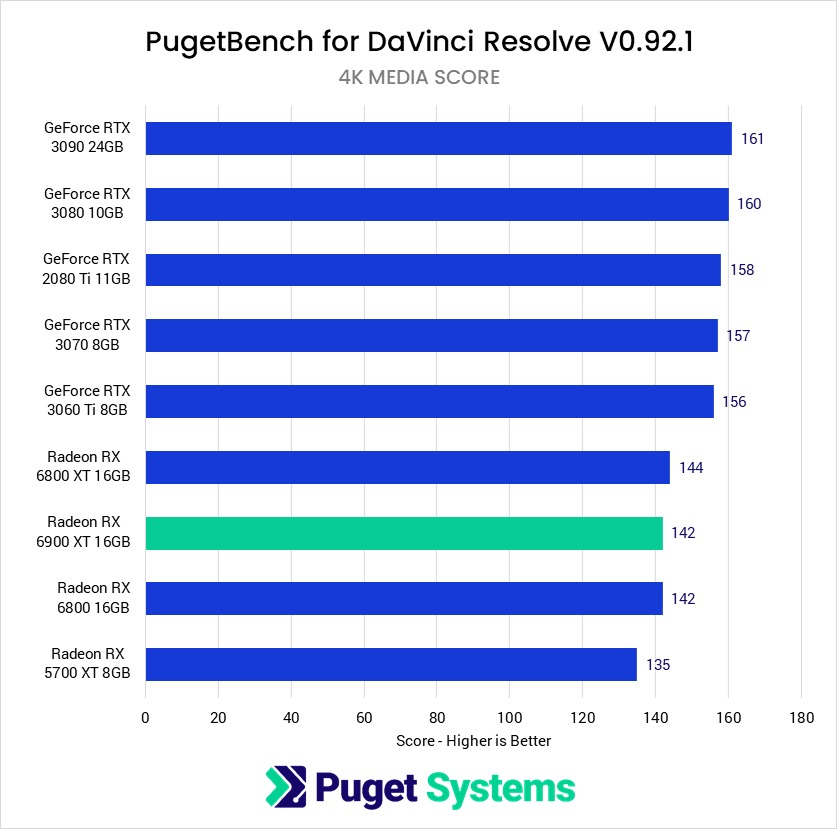 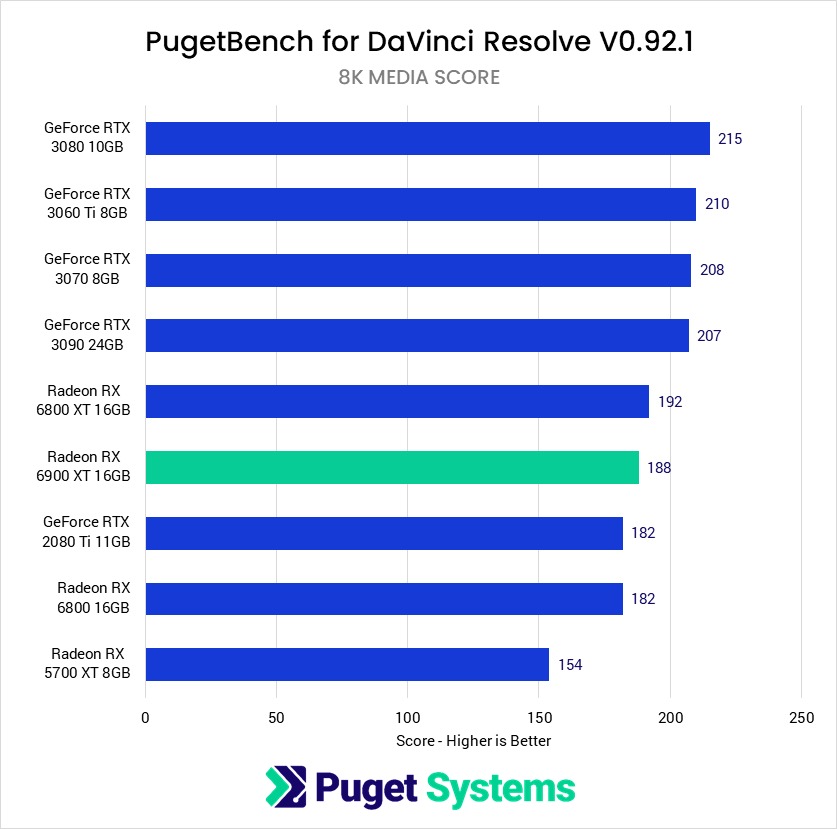 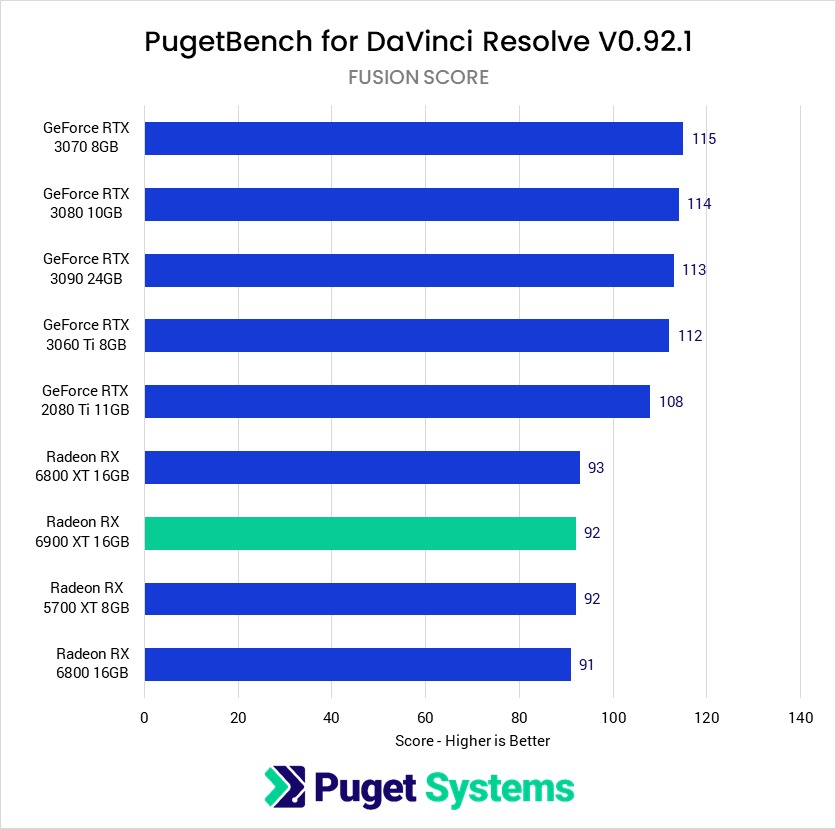 Looking at the Overall Extended Score, the AMD Radeon 6900 XT is interestingly only about on par with the Radeon 6800 XT. They trade places depending on the exact test but overall ended up scoring almost exactly the same.

Unfortunately, that means that AMD was unable to make up any ground versus the NVIDIA GeForce 3000 series GPUs. Even the RTX 3060 Ti ended up scoring a bit over 10% higher, and the RTX 3080 was closer to 20% faster than the Radeon 6900 XT.

The AMD Radeon 6000 series cards do have the advantage of having more VRAM than the similarly priced NVIDIA models, although because of how VRAM usage breaks down across 4K, 6K, and 8K timelines, that actually isn't as big of a deal for most users as you might expect. 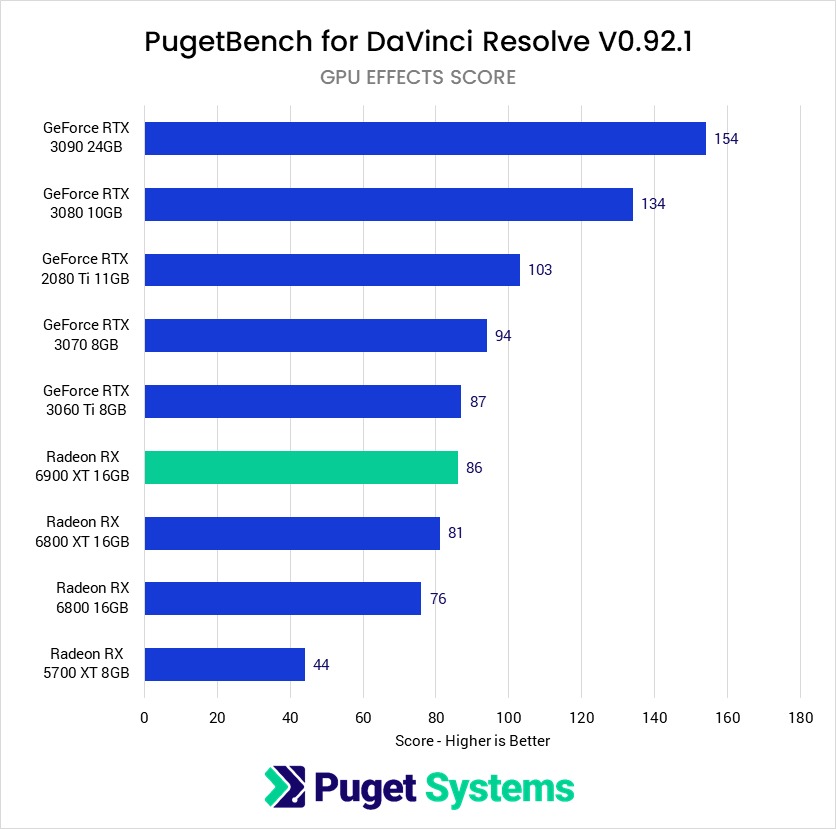 Overall, AMD is heading in the right direction with the Radeon 6000 series cards, but just like we saw in many Adobe applications, even the impressive gains they are showing over the 5700 XT simply isn't enough for them to catch up to NVIDIA.

Currently, the only time the Radeon 6000 series cards – including the 6900 XT – would make sense to use for DaVinci Resolve is if you wanted to be able to edit 6K timelines but cannot afford the (significantly) more powerful NVIDIA GeForce RTX 3090 24GB. Having 16GB of VRAM on a sub-$1000 card is very nice, although 6K editing has fallen out of style a bit in favor of 8K – and 16GB is not quite enough for most 8K timelines in Resolve. For that, you ideally want to have at least 20GB of VRAM which will limit you to the GeForce RTX 3090 24GB or a workstation-class card like Quadro or Radeon Pro.