In the 14.2.0 Beta for Premiere Pro, Adobe has added support for H264/HEVC hardware encoding on both NVIDIA and AMD GPUs in addition to the existing method which utilizes Intel Quicksync on supported CPUs.

In our tests, this feature resulted in between a 2-4x improvement in export times depending on the source codec with a minimal (if any) decrease in video quality.

In the 14.2.0 Beta for Premiere Pro (which anyone can download and try through the Creative Cloud application), Adobe has added support for H264/HEVC hardware encoding on both NVIDIA and AMD GPUs. Prior to this, the hardware accelerated encoding available in Premiere Pro was done using Intel Quicksync on supported CPUs rather than by a video card. Quicksync is still supported if you do not have a compatible GPU, but with a supported NVIDIA or AMD GPU, this should allow you to export to H.264 or HEVC faster than ever before.

Since this feature is still in beta, we aren't going to go through the kind of testing we normally would do. Once this hits release, we will likely take a look at how different GPU models perform, how bitrate affects performance, and a handful of other factors. For now, however, we will look at performance with five test systems to see how the NVIDIA hardware acceleration performs when rendering 4K H.264 150mbps, ProRes 422, and RED media.

As this is a relatively short post, we are not going to take up half of it listing the system specs we used. If you want to know what motherboard, cooler, etc. we used, the system configurations are identical to what we used in our recent Premiere Pro performance: PC Workstation vs Mac Pro (2019) article. The only difference is that we added an Intel Core i5 7600K system with an NVIDIA GeForce GXT 1070 so that we could see how the performance is on a slightly older platform.

For our tests, we used the "Lumetri Color" sequences in our PugetBench for Premiere Pro benchmark and exported them using the "YouTube 2160p 4K Ultra HD" preset. One little thing to note: we did have to change the encoding level to 5.2 as the default 5.1 does not allow you to export at 3840×2160. On the systems that supported Quicksync, we also included results using that version of hardware acceleration, although we had to use the current latest release version of Premiere Pro (14.0.4) since in the current beta, it defaults to using the NVIDIA/AMD GPU over Quicksync if it is available. 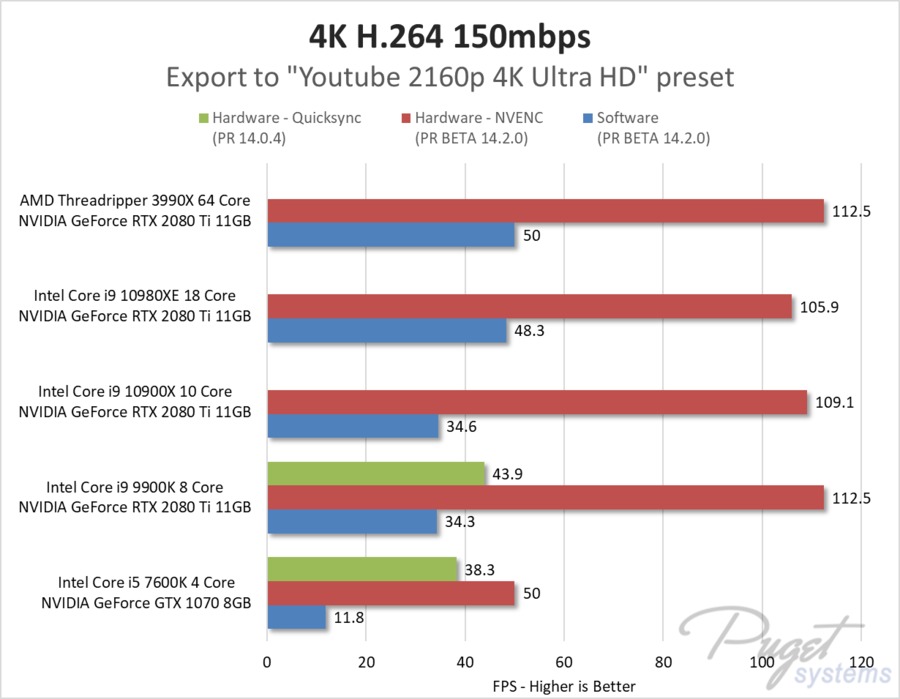 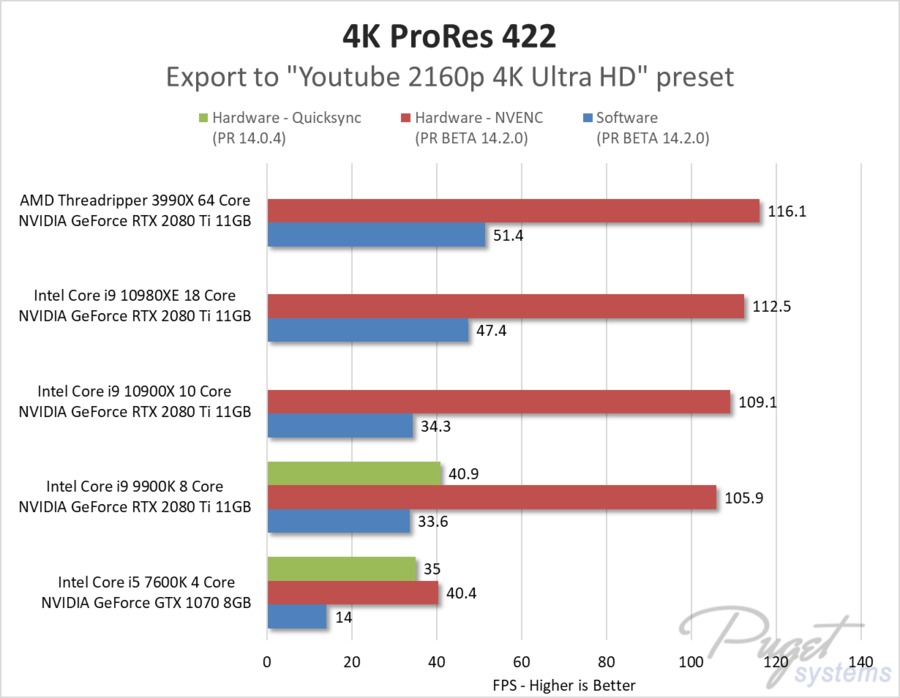 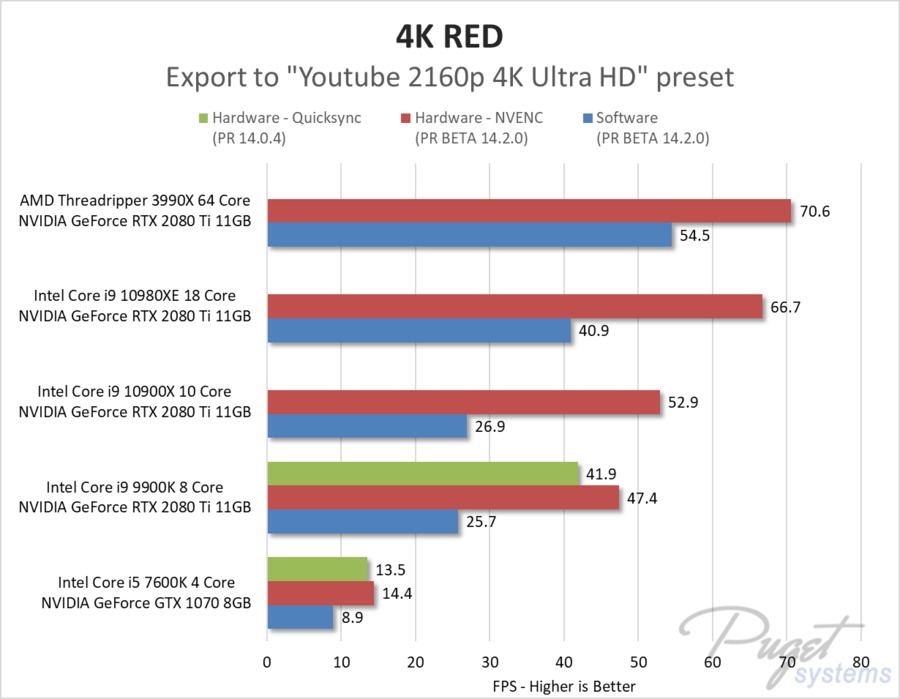 Moving on to the 4K ProRes 422 sequence, the performance gains were a little less, ranging from roughly a 2-3x increase in performance. What is interesting is that it was really only the Core i5 7600K system that didn't see as significant of a performance increase compared to the previous test – all of the modern systems saw almost identical improvements in export times. The advantages over Quicksync are also very similar with a 1.2-2.6x increase in performance on the supported systems.

Last up is our 4K RED sequence. This one is interesting since RED media is much harder to process, and it is also already using the GPU to debayer the RAW footage. Because of this, the performance gains are not quite as impressive – only about 1.3-2x faster than software rendering. This is still a bit faster than using Quicksync hardware accelerated rendering, however, so even though we are likely GPU bottlenecked it is still a great feature to take advantage of.

What about video quality?

For those that are not aware, there is an issue with hardware accelerated rendering – the quality is technically not as high as using software only. For some people, the quality difference is so small that it doesn't matter, while for others it is major issue. Which side of the fence you fall on is completely up to you, so we are largely going to avoid the topic in this post.

What we will do is leave you with uploads of the exported videos using each type of encoding. YouTube does compresses anything you upload, however, so if you want to view the source media directly, we also have the original exports available for download that you can import into an NLE and compare more closely.

For those that don't want to examine these videos, we will say that the quality difference appears to be extremely small in our test cases. It is very possible that shots with more patterns and movement may show a larger difference – or that at lower bitrates the differences will be more apparent – but most editors will likely decide that the possible quality loss is acceptable in exchange for significantly faster export times.

Overall, H.264/HEVC hardware encoding using NVIDIA and AMD GPUs in the Premiere Pro beta is very impressive. Depending on your source media and how powerful of a CPU/GPU you have, the performance gains may *only* be a 2x increase in export performance, but in some cases, we saw up to a 4x improvement in export performance. Keep in mind that most of our testing was done with fairly powerful CPUs which meant that our export times were already very respectable even without hardware acceleration. If your system has a significantly more powerful GPU than CPU (which can often be true on gaming computers and many laptops), you are likely to see even larger increases in performance.

Another great part of this feature is that since GPUs are much easier to upgrade than processors (which will usually require at least a new motherboard if not new RAM as well), this gives Premiere Pro users a much easier method to upgrade their system if they wish to improve performance. This may only be for export/encoding at the moment, but we have to imagine that at some point Adobe will also make GPU-accelerated H.264/HEVC decoding available as well.

This is going to be a huge boon for so many Premiere Pro users, and we can't wait for it to be fully launched. If you want to try it out yourself, you can install the beta version of Premiere Pro though the Creative Cloud app in the "Beta apps" category. This does not overwrite your normal install of Premiere Pro, so there is no need to worry about it messing up any of your current projects or settings. If you do end up trying it out, let us know what you think in the comments!