Skip to content
Always look at the date when you read an article. Some of the content in this article is most likely out of date, as it was written on October 1, 2018. For newer information, see our more recent articles.

Note: If you are looking for results using the RTX 2070 8GB model, we have a follow-up article available: Premiere Pro CC 2018: NVIDIA GeForce RTX 2070 Performance

Like most of Adobe's popular applications, Premiere Pro CC utilizes the GPU to enhance performance for a number of tasks but it is often more important to get the right CPU than it is to get a faster GPU. NVIDIA's new RTX series cards have general performance increases like you would expect, but much of what makes these cards interesting are the addition of two new features: Tensor cores and RT cores.

RT cores are brand new in this generation of graphics cards, and are specialized for a single type of operation: ray tracing. It is possible that Adobe may utilize these cores in After Effects or even Photoshop to some extent, but we feel it is unlikely they will be used much in Premiere Pro.

What makes these new RTX cards hard to review and test is the fact that Premiere Pro currently does not use either of these new types of cores. We can (and will) look at straight performance gains with the current version of Premiere Pro, but really what you are paying for is technology that might give you significant performance gains in the future. 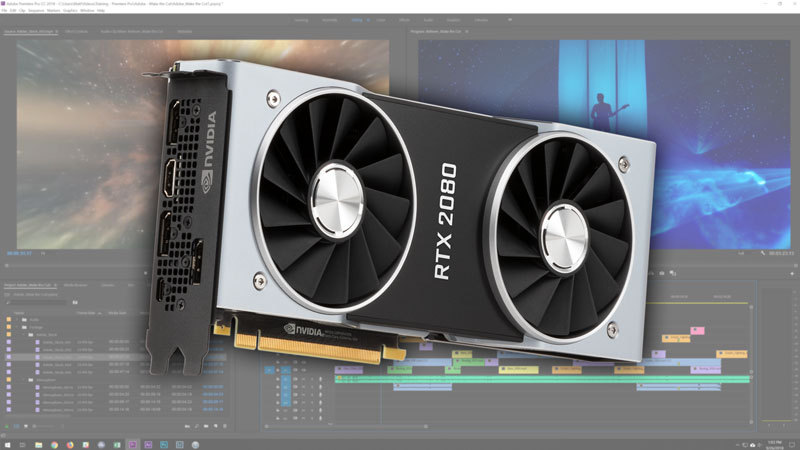 Listed below is the test platforms we will be using in our testing:

To see how the new RTX cards perform in Premiere Pro, we tested it against a selection of cards from NVIDIA as well as AMD's Vega 64 GPU.

Often, whether the media we test is RED or not makes a big impact on performance since RED footage uses the GPU for the debayering of the RAW footage. Since this was a pretty big factor, we decided to look at the results depending on whether we were using RED media or non-RED media. 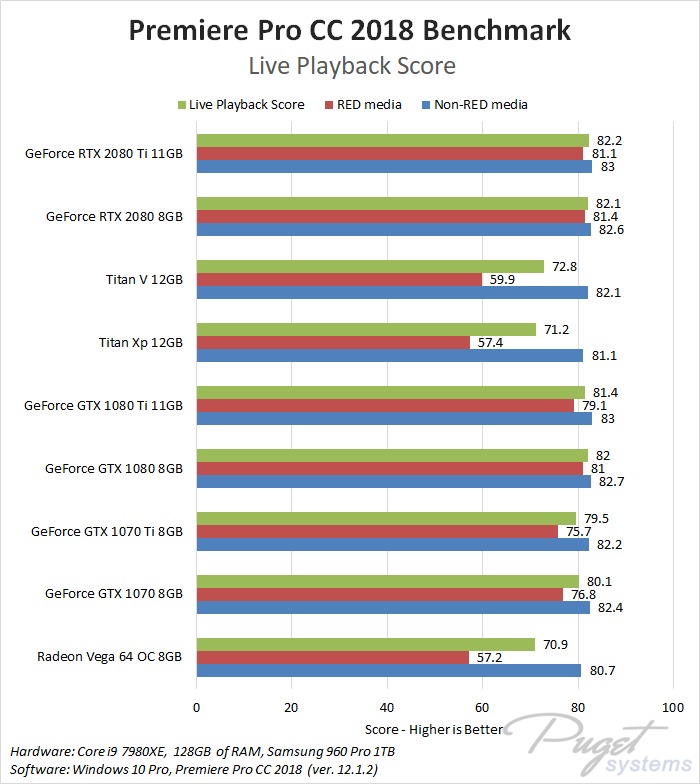 There are a few interesting data points, but it mostly boils down to the AMD Vega 64 and the NVIDIA Titan cards under-performing with RED footage, but otherwise the cards performing very similarly. All the GPUs we tested (including the new RTX cards) were close to identical for non-RED footage, and even with RED media the RTX cards were only slightly faster than the current GTX cards. 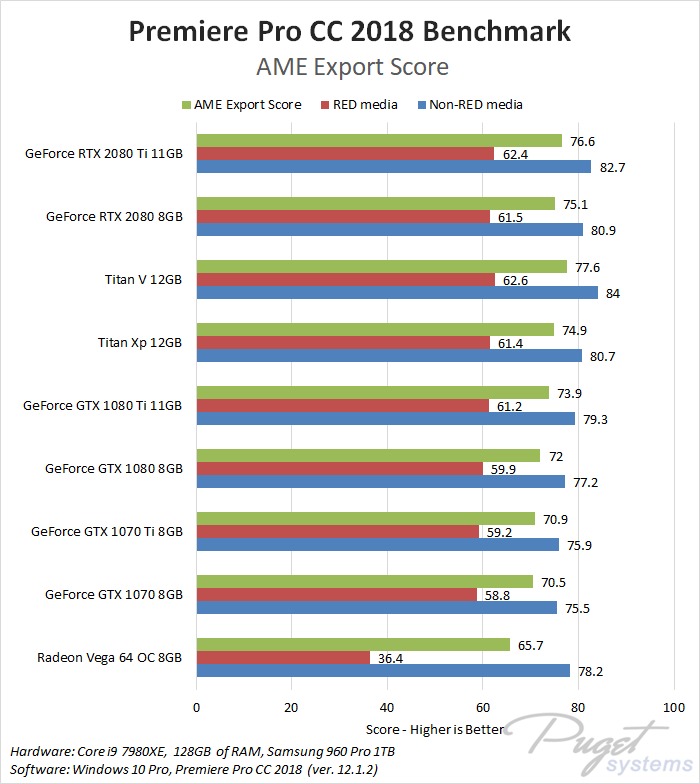 Exporting through Adobe Media Encoder gives us a bit larger of a difference delta the cards we tested compared to Live Playback. Here we saw a small, but consistent, increase in performance with both RED and non-RED footage as you go up the NVIDIA GPU stack. Neither the RTX 2080 or 2080 Ti quite catch up to the more expensive Titan V, but both ended up being a tiny bit faster than the Titan Xp.

We are really talking about a ~5-10% difference in performance between the RTX 2080 Ti and the GTX 1070, however, so you likely won't notice a massive difference between any of the NVIDIA cards we tested unless you are doing exports that take several hours to complete.

Are the RTX video cards good for Premiere Pro?

The new RTX 2080 and 2080 Ti cards are certainly not bad for Premiere Pro, but the difference between any mid/high end NVIDIA GPU is going to be very minor. These cards are technically 1-2% faster than the GTX 1080 Ti, but you will likely not be able to tell the difference in Premiere Pro. 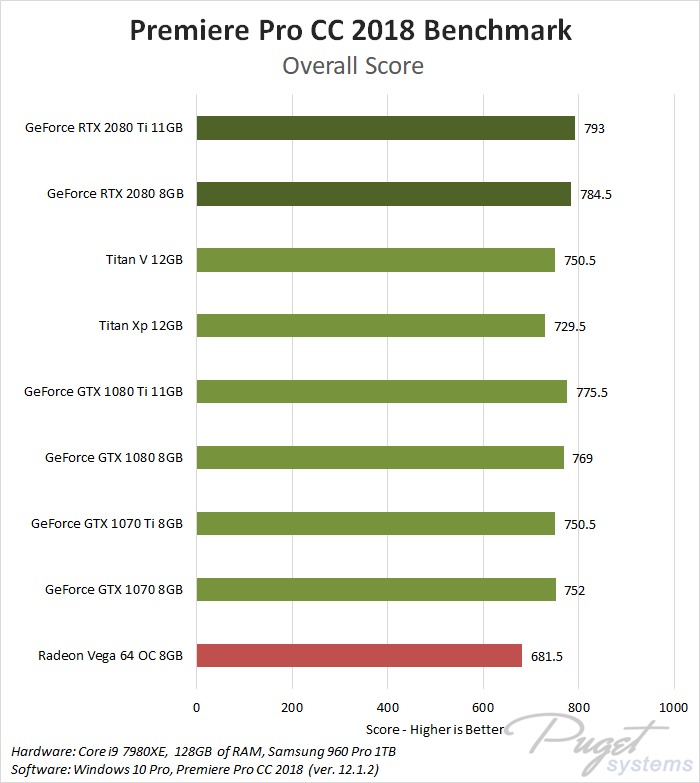 While not exciting for Premiere Pro right now, the real question is whether the RTX GPUs will be good for Premiere Pro in the future. The new tensor cores in particular could have significant performance advantages for some tasks, or they might never be used at all. It really comes down to whether or not the Premiere Pro developers are willing or able to make effectively use of these new features. Our guess is that they will eventually be leveraged in some way via Adobe Sensei, but whether it will happen in Premiere Pro CC 2019 or Premiere Pro CC 2030 is unknown at the moment.

Overall, the RTX cards are probably not worth using for their performance alone in Premiere Pro. However, but if you already need a high-end GPU for other applications (DaVinci Resolve, GPU-based rendering, etc.) we would highly recommend using one of these RTX cards if possible. The RTX 2080 does have less VRAM than the comparably priced GTX 1080 Ti (8GB vs 11GB) which is not ideal for 8K workflows, but the potential these cards offer is very hard to ignore.