Skip to content
Always look at the date when you read an article. Some of the content in this article is most likely out of date, as it was written on December 13, 2018. For newer information, see Premiere Pro CC 2019 CPU Roundup: Intel vs AMD vs Mac

Across all the workstations we configure, sell, and support, Premiere Pro is one of the more difficult software packages to design a system for. Not only does the resolution and codec of the media you work with affect how much raw performance you need, it can also vary based the kind of effects you use, the number of video layers, etc. In addition, there is no single piece of hardware that is the most important. The CPU is the biggest single piece, but the choice of GPU, RAM, and storage are also critical to having a well-tailored and efficient video editing workstation.

In addition to being one of the more important choice, getting the right CPU is also one of the more complicated decisions. Unlike applications like Photoshop and After Effects where there is a relatively clear "best" CPU, in Premiere Pro there are reasons to use a wide range of processors depending on your budget and what you are doing. To help you decide which CPU to use for Premiere Pro, today we will be looking at a wide range of processors from Intel and AMD including the Intel 9th Gen, Intel X-series, AMD Ryzen 2nd Gen, and AMD Threadripper 2nd Gen CPU lines. In addition, we will be comparing them to a current Mac Pro 12 Core and iMac Pro 14 Core for those that are curious about how much faster a PC workstation can be compared to a Mac. 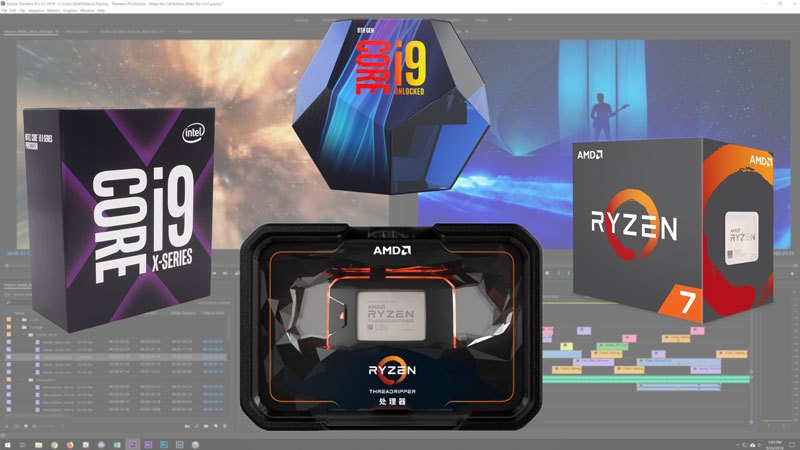 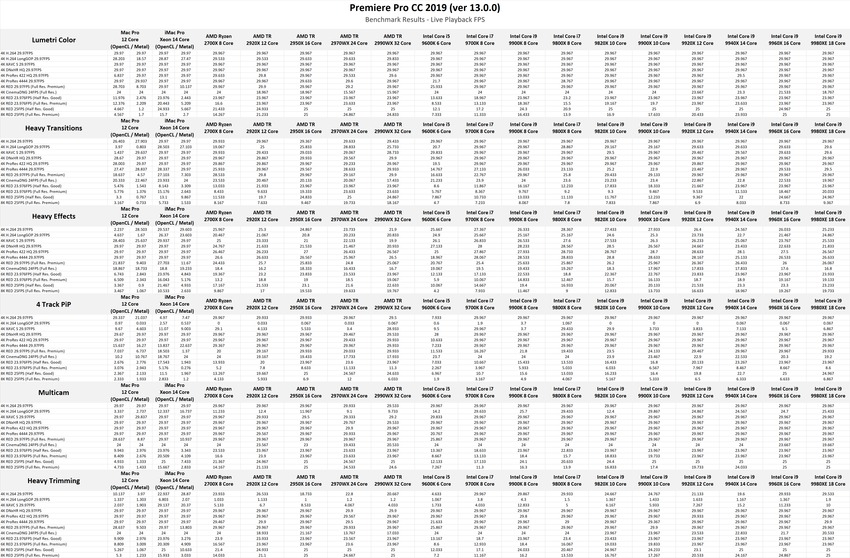 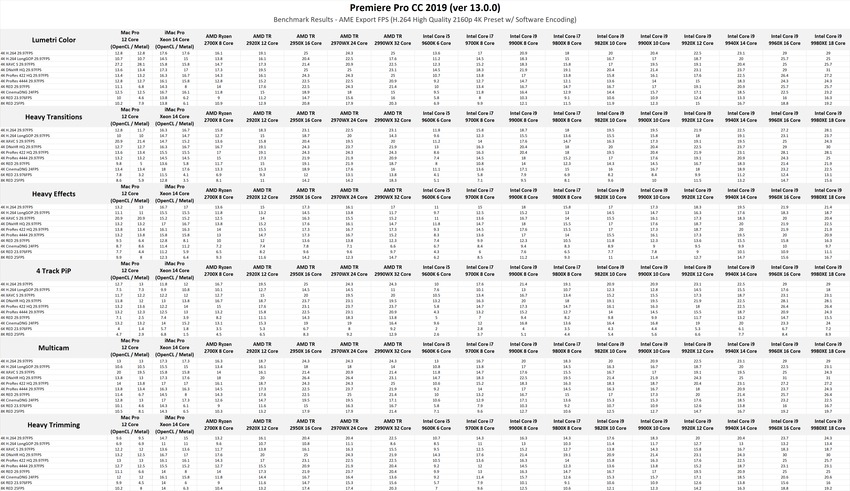 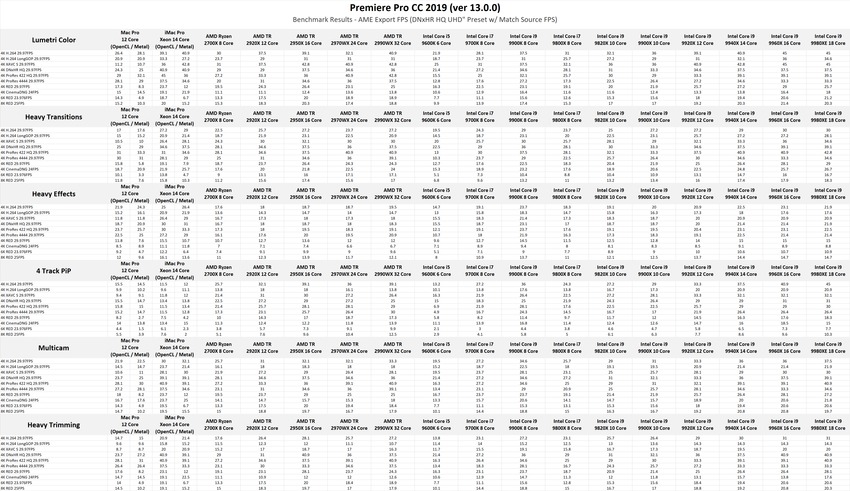 The "Score" shown in our charts is a representation of the average performance we saw with each CPU for that test. In essence, a score of "80" means that on average, the system was able to play or export our projects at 80% of the tested media's FPS. A perfect score would be "100" which would mean that the system gave full FPS even with the most difficult codecs and effects. 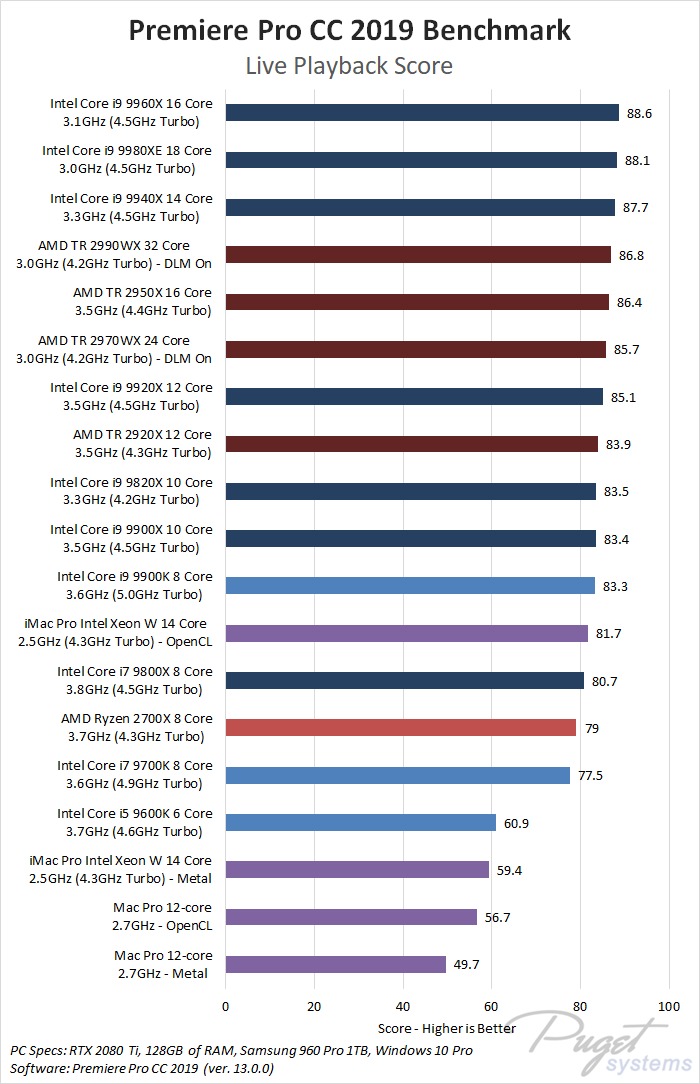 Live playback in Premiere Pro is one of those times where there is great benefit to having a more powerful CPU, but there is also a clear point of diminishing returns. With a modern CPU, this appears to happen right when you get up to a ~$350 processor. After that point, you are only talking about a ~10% difference in live playback performance even if you go up to the highest-end CPUs currently available. Because of this, there are really only a handful of things we want to point out:

First, if you are considering Threadripper there is little difference between the current models for live playback. There is a slight advantage to using the 2950X over the 2920X, but no reason to use the more expensive 2970WX or 2990WX. Both the 2920X and 2950X fare pretty well against the similarly priced Intel CPUs, although there is minimal difference between the 2920X and the less expensive Core i9 9900K.

The Apple-based systems did about as well as we expected. The aged (but still current) Mac Pro 12 Core is way at the bottom of the chart and is out-performed by even the Intel Core i5 9600K. The iMac Pro 14 Core did better as long as it was in OpenCL mode, but even then, it was still slightly slower than the Intel Core i9 9900K. To be fair, the GPU used in the Mac systems is significantly less powerful than the RTX 2080 Ti we used in our other tests, but we are using the highest-end GPUs currently available in both the Mac Pro and iMac Pro. 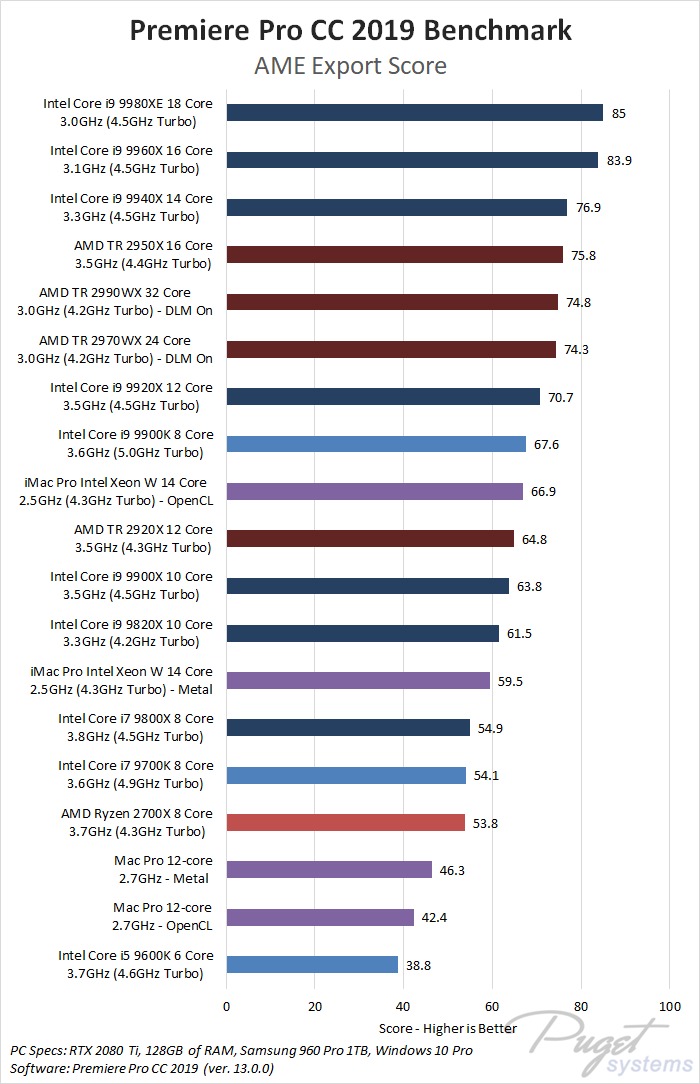 Moving on to the exporting results with Adobe Media Encoder, the results are slightly different than they were for Live Playback, but are overall very similar.

Again, starting with AMD Threadripper, the 16 core 2950X was actually the fastest model, beating the more expensive 2970WX and 2990WX models by a slight margin. Surprisingly, the 2920X actually dropped a bit with both the Core i9 9900K and iMac Pro 14 Core now slightly beating it.

For Intel, things are largely the same with a couple of exceptions. This time, the Core i9 9900K firmly out-performed the 8/10 core Intel X-series CPUs by 6-23%. On the less positive side, however, the i5 9600K did quite a bit worse than we expected and was beat by even the Mac Pro 12 Core. Still, Intel continues to top the chart with the i9 9960X and i9 9980XE beating the top Threadripper models by about 13%.

On the whole, the Mac systems fared a bit better in this test. The Mac Pro 12 Core still does poor, but the iMac Pro 14 Core was right in the middle of the pack. Of course, you are paying a hefty premium for the iMac Pro so it certainly is not a very cost-effective solution. Just as an example, the iMac Pro we are using costs $8,000 while one of our workstations with an Intel Core i9 9980XE and otherwise similar specs costs about $6,000 while being ~30% faster. Of course, the iMac Pro includes a monitor, keyboard, and mouse, but for $2,000 you can easily get a very nice monitor (or pair of monitors) and still have plenty of money left over.

Intel vs AMD vs Mac for Premiere Pro CC 2019

For Premiere Pro, there is no clear winner as far as Intel vs. AMD goes, although in many ways Intel has the edge. At the lower-end, the Ryzen 2700X and Core i7 9700K are pretty even both in terms of cost and performance. Across most of the rest of the pricing stack, however, Intel tends to have the price/performance lead with the exception of the ~$900 CPU mark where the AMD Threadripper 2950X beats similarly priced – and several more expensive – Intel CPUs.

PC vs Mac, however, is a much easier question to answer. Compared to the iMac Pro we tested, you can easily up to 16% higher performance at a much lower cost with a PC. Against the aged (but current) Mac Pro, you are looking at a 75% increase in performance with a Core i9 9980XE which, in even our high-end workstations, would still come out to being the less expensive option. 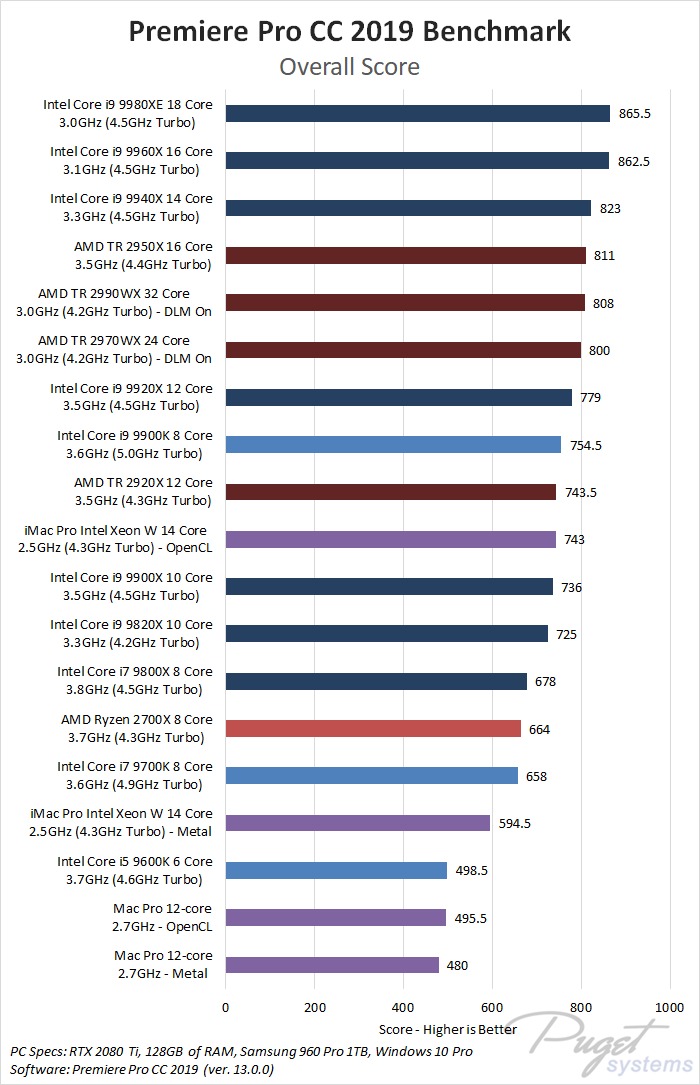 Overall, choosing the right CPU for Premiere Pro is a bit of a complicated topic and depends heavily on how much CPU power you both need and can afford. Of course, there are other factors such as Thunderbolt support (which is not officially available on AMD), but in terms of pure price and performance, our current CPU recommendations are:

To be honest, we almost skipped the $1,400 price point entirely since a 1.5% performance gain with the i9 9940X over the TR 2950X is pretty trivial. However, there are two reasons why we decided to keep it in. First, there are some relatively common instances where the i9 9940X does better than the overall score indicates – particularly with 4K H.264 150mbps media. Second, Threadripper doesn't fare well in other Adobe applications like After Effects and Photoshop. Because of this, you could see much better overall system performance with the i9 9940X if your workflow also includes those (or similar) applications.

If you are curious how the latest Intel and AMD processors perform in other applications, be sure to check out our recent Processor articles as we have a number of articles looking at CPU performance in Photoshop, Lightroom, After Effects, DaVinci Resolve, and many other software packages.