Always look at the date when you read a hardware article. Some of the content in this article is most likely out of date, as it was written on December 12, 2011. For newer information, see our more recent articles. 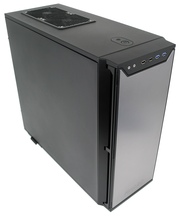 With their Performance and Sonata series Antec has long been one of the top manufactures of quiet chassis. Given the large emphasis we at Puget Systems place on quiet computing, it's no surprise that we heavily use Antec chassis in our product lines. In fact, just over 48% of our systems in 2011 were built using the Antec P183 V3.

The P280 is the latest addition to Antec's Performance series, but rather than being a replacement to either the P183 or P193 is more of an overhaul of both chassis. The focus on quiet operation is still present, but many of the features used to attain this focus have been completely redesigned.


We will be going over many of these specs in other parts of this article, but we want to point out just a few things here. First, the P280 is about an inch wider than either the P183 or P193 (if you discount the side fan on the P193) but only slightly taller. Depth wise, it is right between the P183 and P193. One of the smallest, but one of the most intriguing for us, changes is the fact that the front USB 3.0 ports finally use an internal header instead of having to be routed through to case to plug into an external port. The internal audio plug has also been changed to drop AC'97 support which is long overdue in our opinion.

Now that we have a general feel for this chassis, let's take a closer look, starting with the exterior of the chassis:

Starting with the front, this chassis has a large door covering nearly the entire front from top to bottom. While a front door is a staple of the Performance series from Antec, this door has been slightly redesigned in order to accommodate some of the more common complaints about the P183 chassis. Most notably, the front ports (2 x USB 2.0, 2 x USB 3.0 and audio in/out) and power/HDD LED's have been moved to the very top of the front panel since this chassis is most often positioned on the floor next to a desk rather than on top of a desk. The power and reset switches have also been moved from behind the door and relocated onto the very top of the chassis. This means that the only reason to open the front door of the P280 is to gain access to the DVD or other 5.25" device or to clean the front filter.

The bottom of the chassis is fairly standard with just the feet and PSU intake grill. The feet are hard plastic, but have a ring of rubber on the bottom to help reduce vibration. The PSU intake features a removable filter that can be pulled out from the left side of the chassis, and is actually just below the side panels. This allows the filter to be removed for cleaning without having to open the chassis at all.

Both sides of the P280 are identical - the side panels themselves can even be switched from one side to the other. In fact, the only difference between the two sides is the removable fan filter below the side panel on the left side. There are no fan mounts in either panel, which is to be expected from a chassis with a focus on quiet operating. Like the P193 V3,  the P280 side panels are just painted a flat black and do not have the same gunmetal finish as the front like the P183 V3.

As mentioned earlier, the power and reset switches have been moved to the top of the chassis. Also on the top are two 120mm fan mounts which are prepopulated with Antec TwoCool fans. The top panel itself is just a single layer of sheet steel with no acoustic dampening material pre-installed. One minor gripe we have here is that the fan screws are silver instead of black.

Finally, the back of the chassis has a few subtle differences compared to the P183 V3 or P193 V3. At the top, there is a mount to hold the speed switches from four Antec TriCool or TwoCool fans, allowing them to be easily accessed from outside the chassis. Only three fan mounts are in range however, so one of those spots will always be vacant. Moving down, you can see the more than normal nine PCI slots available on this chassis. This allows the chassis to support quad-SLI (four video cards total) with the use of XL-ATX motherboards. Next to the PCI slots are two liquid cooling pass-through grommets. Lastly, at the very bottom is the standard mounting hole for the PSU.

This chassis only supports standard power supplies, and not the Antec-branded CP series of power supply (which is slightly taller which allows a 120mm fan to be mounted to the rear of the PSU for cooling). This lack of CP-series mounting is likely due to the fact that if Antec included both the nine PCI slots for XL-ATX motherboards as well as mounting for the CP-series power supplies, this chassis would be even taller than it already is.

What seems strange to us however is that this chassis is not in Antec's Gamer or Dark Fleet series of chassis, which are focused on high-performance computing. It is in fact in the Performance series which places an emphasis on quiet operation (yes, we know how confusing it is to have the Performance series not actually focused on cooling performance, but rather quiet operation). So that begs the question: why drop support for some of the quietest power supplies we've ever used, and add support for quad-SLI which will never be quiet with standard air cooling no matter what you do? Frankly, we would rather see the standard seven PCI slots and support for CP power supplies.

Normally we would not devote an entire section to just the front panel of a chassis, but there are enough changes and good features here that we wanted to be sure it got the attention it deserved.

Upon opening the door, you get a view of a few of the nice features of this chassis. The door itself has a layer of sound dampening material and is double hinged - allowing it to open a full 270° and sit flat against the side panel. The door itself is also easy to remove for replacement or removal by simply pulling it off. Plastic doors such as this can sometimes end up feeling flimsy, but this door feels very solid.

Beyond the three 5.25" bays, the only thing behind the door is a large filter for the front intake. This filter is easily removed for cleaning by pressing down on the two tabs located at the top of the filter. Removing the filter also exposes the two front fan mounts which are intended to be mounted with two screws each. The power cables for these fans can be routed into the chassis via small cutouts to the right side of the mount. The only thing we would have liked to see here is matching cutouts on the left side as well so that the speed switches for Antec TriCool or TwoCool fans could be positioned in an area that is a bit easier to access.