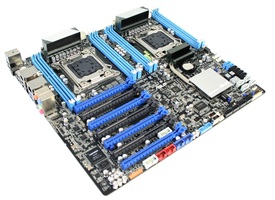 Alongside the launch of the new Xeon E5 processors from Intel (see our Technology Primer here), a new motherboard chipset, codenamed Romley, has also been released. The Z9PE-D8 WS is the first motherboard we have had a chance to qualify with this new chipset, so in addition to our normal qualification process we will also be performing some thermal evaluations to see if this motherboard runs any cooler than its predecessor. The changes to the Romley chipset (view our summary here) should result in a much cooler running chipset, but we want to see for ourselves just how much of a difference there truly is.

Before we get into our full qualification process, however, let's take a look at the specs for this motherboard:

Like most of Asus' modern motherboards, the Z9PE-D8 WS motherboard uses the new UEFI specification rather than the older BIOS. UEFI does essentially the same thing as BIOS (handles everything from when the machine is first powered on to when the OS loads), but fixes many limitations present in BIOS. Most notably, it included native 64-bit support, so hard drives larger than 2TB can be used without any problems.

Unlike most of Asus' workstation motherboards, though, the Z9PE-D8 WS does not have a graphical interface and does not support OC profiles. While the lack of profiles is a bit of an annoyance, thankfully EZ Flash is still present so updating the BIOS is still a relatively hassle-free job.

Server and workstation motherboards are very different from the average motherboard found in a computer, but we have always found the lack of fan speed control on these types of motherboards to be a bit of a concern. The Z9PE-D8 WS is better than most in that it has three fan profiles, but unfortunately the profiles control all of the fans at once. We would have liked to see at least two separate profiles: one for the CPU fans and one for the chassis fans; each with separate profiles to cover low, medium, high and 100% fan speeds. The profiles that are available on this board are "generic mode", "high speed mode" and "full speed mode".

The rest of the BIOS is pretty much as expected for a motherboard of this class with pages upon pages of options. Unless there is a very specific need or problem, however, we highly recommend keeping the majority of these settings on their default selection.


On the rear I/O panel, this motherboard has 6 USB 2.0 ports available along with 2 USB 3.0 ports. Internally, there is only a single USB 3.0 header (providing two ports) and 2 USB 2.0 headers (providing 4 ports) as well as two additional type A (standard USB) ports. This means that this motherboard can provide a total of 12 USB 2.0 ports and 4 USB 3.0 ports. One odd thing about this motherboard is that while it has onboard graphics (which is a requirement for the ASMB6-iKVM remote management module) there are not any accessible video ports. There is a VGA header internally, but the motherboard does not come with the proper adapter cable to use this header.

For the internal SATA connections, there are 8 SATA 3Gb/s and 2 SATA 6Gb/s ports using the Intel C602 chipset. There are also an additional 4 SATA 6Gb/s ports using the Marvell 9230 controller, but from our testing they are not as good in terms of performance or reliability as the Intel ports. For that reason, we only recommend using the Marvell ports if you are using a SATA 6GB/s SSD and the Intel SATA 6Gb/s ports are both already in use. For more information on the differences between SATA controllers, we recommend reading our SATA Controller Performance Explored article.

Moving on to the PCI-E slots, here is a list and picture of the slots available on this motherboard:

While all seven PCIe slots are the physical x16 size, only four of the slots (blue) actually run at full x16 speeds. The others (black) only run at x8 speed. Even with that consideration, this motherboard has a very impressive amount of potential for both server and workstation applications. Most server expansion cards (such as RAID cards) only utilize PCIe x8, so this motherboard allows for six standard expansion cards (the motherboard does not have a port on the back to utilize its onboard graphics, so at least one slot will be needed for a video card). In the non-server environment, this motherboard can easily support 4-way SLI or Quad-GPU Crossfire for extreme video performance. No matter what the application, this motherboard will run out of physical space long before it runs out of PCIe lanes.

On an EATX server motherboard, it is nearly impossible to layout the various ports and headers in a way that makes sense for all applications. If a tower chassis is being used, you want everything that can obstruct airflow (like RAM and heatsinks) to be oriented vertically since warmer air rises and the front/back airflow in those types of chassis tend to be low to moderate. In a rackmount chassis that relies on high front to back airflow, however, you want everything oriented horizontally to provide the least amount of obstruction to the airflow as possible.

The Z9PE-D8 WS is designed primarily for tower chassis, so the RAM and MOSFET heatsinks are oriented vertically. Again, this is neither good nor bad, but an Intel or other brand of motherboard with the RAM and heatsinks oriented horizontally will have slightly better cooling in a rackmount chassis.

Since the Z9PE-D8 WS uses a completely new chipset and CPU architecture, we wanted to take the time to figure out what type of cooling this motherboard requires. Our current EATX server motherboards are based on the Intel 5520 chipset, which runs quite hot, and since they don't have a fan we have to use either a side chassis fan or our custom chipset cooler.

With the new C600 chipset, some of what is normally done on the chipset (such as the primary PCIe lane control) is moved to the CPU. This does cause slightly higher CPU temperatures, but helps keep the chipset cooler and improves performance. With recent improvements to manufacturing techniques, this increase to CPU temperatures is not a very big deal, so we hope to see great temperatures both on the CPU and the motherboard itself.

In order to test this, we installed a pair of the new Intel E5-2650 CPUs into the Asus Z9PE-D8 WS. For cooling we used a pair of Gelid Tranquillo Rev2 heatsinks and installed everything into an Antec P193 V3. The Gelid Tranquillo Rev2 is a cooler that places an emphasis on quiet operation and does not have as large of a cooling potential as some of our other CPU cooling options, but since we expect the temperatures to be pretty good we wanted to start with the cooler that we would ideally like to use.


To test the thermal performance of this motherboard and CPU combination, we recorded the temperature at both idle and load with the hardware listed above. In order to get a clear look at the cooling across the chipset, RAM, and other motherboard components we took thermal images at idle and load as well.

To fully load the system, we ran a combination of Prime95 and Furmark until the temperatures stabilized (roughly 10 minutes) with CoreTemp being used to log the CPU temperatures. This will cause higher temperatures than any normal user is likely to see, but should give us a clear worse-case scenario for cooling.

Normally, we would just use the temperature of the hottest CPU core as our final result. Since we are working with multiple CPUs however, we are going to go ahead and just show the temperature data from all eight cores from both CPUs.


Even with the Gelid Tranquillo Rev2 CPU cooler, our CPU temperatures are excellent. The second CPU does run hotter than the first, but that is because the air has been pre-warmed after passing through the first CPU cooler. Even with those slightly higher temperatures, both CPUs are well under our safety limit of 80°C.

The thermal image also shows excellent results on the motherboard, with only a tiny bit of red on the RAM. The chipset is running cooler than we had hoped, so we are very excited that we will no longer have to worry about adequately cooling the chipset on this motherboard.

As a point of comparison, here are a pair thermal images from a recent Intel S5520SC based build.

As you can see, the Intel S5520SC has a much hotter chipset. What is interesting is that the area around the CPU (including the RAM) is much cooler than on the Asus Z9PE-D8 WS. The reason for this is that the E5-2650 CPU's run much cooler than the previous generation Xeon processors, so the CPU fans do not need to spin up as high to keep them cool. This is great for system noise, but does have the side affect of increasing the temperature of the components around the CPUs (such as the RAM) due to the lower airflow.

Motherboards that utilize either Intel Xeon or AMD Opteron CPUs commonly have problems with some features in Windows. In the past, the two most common problems have been with S3 standby and SATA hot-plug capability. We can happily report that with the RSTe (Rapid Storage Technology) software installed, we had no problem with SATA hot-plug capability on any of the Intel C602 or Marvell controlled ports. Unfortunately, we still had problems with standby.

The BIOS has options for either S1 or S3 standby, as well as an option to disable standby completely under the ACPI settings menu. S1 and hibernate worked prefectly in our testing, but S3 standby only worked about 50% of the time. When it failed, we were required to hard reset the computer in order to get back into a working environment. Now, this is a new motherboard using a completely new chipset, so minor bugs are not completely unexpected. The question is if this is a bug that will be fixed in a future BIOS/driver update or if it is something that will be a consistant issue with this motherboard. While there is no way to know for certain when this will be fixed, we are hopeful that Asus will be able to get this issue sorted out soon. 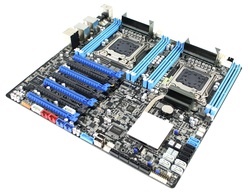 One thing we have not discussed is the boot time on this motherboard. While server motherboards tend to take longer to boot than workstation boards, this motherboard is much, much better than its predecessor the Intel S5520SC. On that motherboard, the time between hitting the power button and the initial POST beep could be as long as 30 seconds. On the Z9PE-D8 WS however, that time is cut in roughly a third and only takes about 10 seconds between hitting the power button and having the first bit of the POST on-screen.

Overall, we are very happy with this motherboard. No board is perfect, but the Asus Z9PE-D8 WS should have very few issues as a workstation or server motherboard. The support for a remote management iKVM module means that you do not need to physically be at the computer to do any maintenance work (including BIOS setup), which is a great feature for servers but can also be nice to have even on a workstation computer.

If there was one thing that we wish was different on this motherboard, it would be that it had usable onboard video. Especially since there is an Aspeed video controller on this motherboard for the iKVM module, just no physical video port, the lack of usable onboard video feels almost like an oversight. Barring that one issue, however, this is a great server or workstation motherboard that will be able to provide plenty of power an as well as giving you the ability to add a ridiculous number of PCIe expansion cards.