Always look at the date when you read a hardware article. Some of the content in this article is most likely out of date, as it was written on November 21, 2013. For newer information, see our more recent articles. 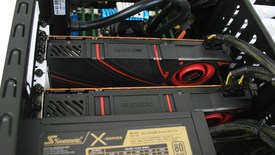 The purpose of this article was to find an explanation for why benchmark results available online for the Radeon R9 290X in Quiet mode vary so much from our own testing. By expanding our normal testing procedure, we found two potential reasons for the difference in performance results. Both are very possible, and it may very well be that it is actually a combination of both that is causing the performance discrepancies.

The first potential explanation we found was that the performance of a single R9 290X with the Quiet profile can drop by as much as 5.6% once the system has reached its full load temperature. Putting this in terms of comparing two fictional reviews, Review1 may show the performance of a R9 290X as 58.5 FPS in a specific benchmark if they only ran the benchmark once. Review2, on the other hand, may show the performance of same card in the same setup with the same benchmark settings as 55.8 FPS if they let the system get to full load temperatures before logging the results. Both are accurate, but one is an unrealistic number since you never are going to game for 5 minutes at a time, letting the system cool down between each session. Even if you do loop the benchmark five times like we did in our testing, if you simply take the average of those five runs you would get a result of 56.5 FPS, not the more accurate 55.8 FPS.

If you add a second video card and start testing in Crossfire, the difference is even larger. Even discounting the times when the cards overheated and overrode the Quiet profile's 2200 RPM fan limitation, we saw up to a 12.3% drop in performance once the system was at full load temperature. This time, Review1 would show 91.5 FPS, but Review2 would only show 80.8 FPS. This is a huge difference, and although both are still technically correct, one is clearly an inaccurate representation of what performance you should reasonably expect from a pair of Radeon R9 290X cards using the Quiet profile in Crossfire.


In addition to the question of whether reviewers are correctly letting the system get to full load temperatures before recording benchmark results, this brings up a second problem that is somewhat new to the art of benchmarking video cards. Considering how much of a difference the overall cooling performance of the system makes on a R9 290X in both Quiet and Uber mode, it calls into question what setup reviewers should use when testing video cards. Should they use a high airflow chassis to find the maximum performance, or a more moderate airflow setup that will give lower performance numbers, but be more accurate for the average user?

Add this to the fact that testing multiple airflow setups is not currently the norm, and it calls into question just how meaningful these benchmarks really are. If the results are obtained by using a high airflow chassis, they might be higher than you would see in your own more moderately cooled chassis. And since other video cards are not as susceptible to heat as the R9 290X, you may end up purchasing a card that ends up performing much lower than you expected. Even to the point that a different video card may have been a better choice. Again, this is not the case for all video cards, but the fact that we saw as much as a 7% difference between a pair of R9 290X cards with the Quiet profile in a high airflow setup versus a low airflow setup is absolutely huge. Even in Uber mode, we saw almost a 3% variance depending on whether we had the chassis fan at 5v or 12v.

Any benchmark you find online is always going to just be an approximation of the performance you should expect from the given component, but with how much cooling affects the performance of the Radeon R9 290X, it might be time to make reviewers jobs just that much harder and introduce testing with variable cooling setups.

So I had a chance to see a reference card with a stock cooler playing a few game demos. The video card was cranking out enough noise to interfere with a casual discussion next to the system. I doubt this card was at full load mind you since it was in a high frame rate area of the game, yet the fan was maxed out.

Have you experienced the same 50+dB noise? If so, I wouldn't recommend anyone buy an R290 unless it has a GIGABYTE WindForce3X, MSI Tri-Frozr III, or ASUS DirectCU III series GPU cooler. At least those coolers can manage heat without the raging noise. Or, I suppose consumers order a system from you guys with custom liquid cooling. Are you guys still featuring Koolance cooling blocks?

Honestly, it didn't sound as loud as I expected with all the talk about the noise, but it certainly is louder than any other card on the market right now. I think if you have the computer under your desk and always game with headphones the noise isn't ever going to be a problem. It's just fine at idle or low load, and if you use headphones that should block our the noise while gaming.

Right now the ASUS DirectCU II is the card we are planning on using since the DirectCU series has just been great for us in the past. I know at least a couple guys here that are waiting for all the different manufacturer and third party coolers become available. And yes, we are still using Koolance blocks on our liquid cooled systems. We only got the video cards a few days ago, and one of the reasons we were able to get this done as fast as we did is because Koolance is actually right across the street from us. Makes it really easy to get parts and work with them on custom solutions.

I noticed that Puget Systems is pretty good at integrating the best GPU option (or any component option for that matter) available which sometimes means waiting for the right components. Your CEO and production manager always seem to have their finger on the pulse of what is consumer worthy and what is not.

That said, I didn't realize ASUS was using the DCU II cooler. I assumed since the R270/290 were so hot that they would use a bigger cooler like the rest of the AMD partners. Either way, the DCU II is pretty well proven. Still, I'm curious to see how Koolance's water blocks and your loop manages the R270/290 temperatures. Part 2?

Happy Thanksgiving to everyone at Puget Systems!

I noticed that Puget Systems is pretty good at integrating the best GPU option (or any component option for that matter) available which sometimes means waiting for the right components. Your CEO and production manager always seem to have their finger on the pulse of what is consumer worthy and what is not.

That said, I didn't realize ASUS was using the DCU II cooler. I assumed since the R270/290 were so hot that they would use a bigger cooler like the rest of the AMD partners. Either way, the DCU II is pretty well proven. Still, I'm curious to see how Koolance's water blocks and your loop manages the R270/290 temperatures. Part 2?

Happy Thanksgiving to everyone at Puget Systems!

I'm confused about adding this card to a system. In my view, from what I have been reading, it just runs too hot. You are going to have to spend a lot more in terms of cooling to have this in your machine.

Compare this to the Titan or the 780i, and why would someone choose the 290x over one of these cards? Is the difference in performance so much better with the 290x?

For a brief period of time, before the GTX 780 Ti came out, the 290X was the fastest single-GPU card on the market... and at a much lower price than the Titan. It still comes in at a lower cost than the 780 Ti, but given the heat and noise issues I can't recommend it in good faith. Liquid-cooling might solve that, but with the amount of cost and complexity that adds the GTX 780 Ti is suddenly a much better value as well as being faster.

The 290X does run hot, but you have to remember that this is the temperature the card is designed to run at. Just like how the NVIDIA cards are designed to run around 80C, the amount of cooling you have in your chassis won't greatly affect that unless you replace the cooler itself. If you have more airflow than is needed, all that is going to happen is that the GPU fan is going to run a little slower, not that the GPU will actually run at a lower temperature. So yes, 94C is hot, but thats the temperature AMD decided was safe. Whether it is a safe temperature to run at for prolonged periods of time is something that cannot be known until we have some longer-term reliability numbers.

The main benefit of the R9 290X over the 780 Ti is simply cost. If you are on a budget and don't mind that it is louder (or you are planning on liquid cooling anyway), then it is a great value. It also tends to score a little better at high resolutions like 4k, although I'm not convinced the 4GB of video memory is going to be enough for games in a year or two.

So personally I see the R9 290X as the budget or price-conscience option, whereas the GTX 780 Ti or GTX Titan is the safer, cooler, quieter option.

If I understand you correctly, it means that improved airflow inside the case has reduced returns when it comes to Radeon R9 290X reference model fan speeds? I have a 290X reference card and i am currently running an open case as I thought it would help the card. But if the case temp has a limited impact on the GPU I might aswell close the case to get a little less of the noise.