Skip to content
Always look at the date when you read an article. Some of the content in this article is most likely out of date, as it was written on August 18, 2017. For newer information, see our more recent articles.

A lot of our customers use software from Autodesk for various engineering disciplines, but aside from some basic specifications and supported video card lists there is not much information available on what hardware actually performs best in these applications.

In this article we are going to look at several NVIDIA Quadro GPU (video card) options that you might consider in an engineering workstation to see exactly how they compare in Revit 2018.

If you are interested in how well different hardware works with Autodesk Revit 2018, don't miss our article on CPU performance. We also have CPU and GPU articles focusing on Revit 2017.2 if you want to see how performance has changed (or not) from one release to another.

This hardware is based on what we found to perform best in most aspects of Revit and is similar to our recommended Revit workstation for modeling and design. The Quadro cards we tested are the latest Pascal based models, and the P2000 through P6000 are officially certified by Autodesk for Revit 2017. As of this writing, Autodesk has yet to certify any NVIDIA graphics cards for the 2018 release of Revit. But when they do, these four Quadro models are should be among them. Here is a chart of these GPUs, with links to more information:

We performed our tests using the latest beta of the RFO Benchmark. It has been updated to support Revit 2018, though the final version is not officially out yet. For members of the Revit Forum, the beta version and discussion about it can be found here.

Within the RFO Benchmark there are now several test variants, and we found the Graphics_Expanded test worked well for comparing GPUs. It breaks down results into several categories:

Each of these categories will be shown in our results, and we ran the benchmark at both 1080P and 4K resolution (1920×1080 and 3840×2160, respectively). Instead of listing raw measurements in seconds, the results have been turned into percentages with the P6000 as the comparison point.

We also used the Full_Standard version of the RFO Benchmark, for our upcoming article about CPU performance. In our Revit 2017 testing we found that rendering was minimally impacted by the video card, but with 2018 that difference no longer present. A graph showing a bunch of identical results would be boring, so we skipped it – but it is worth mentioning, for those who have seen our previous Quadro benchmarks. 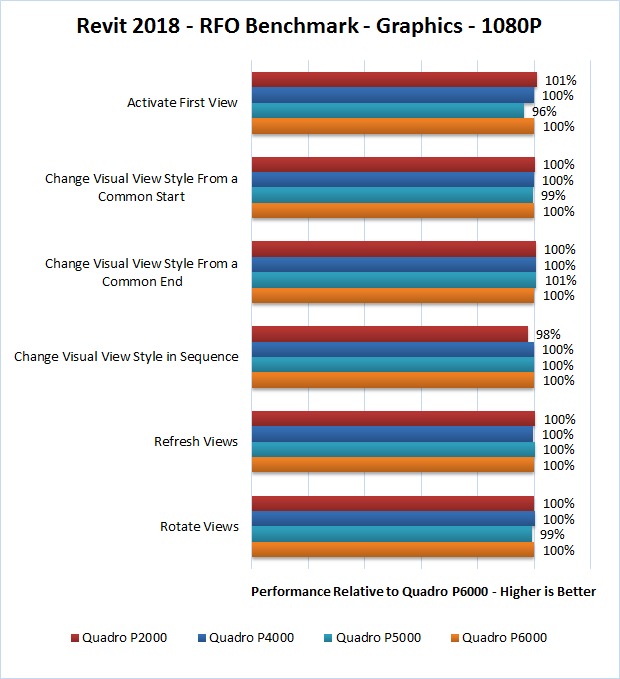 I wrote that I was not going to show a boring graph, but I lied. I'm only going to show one boring graph, as seen above. At this resolution, there is no significant difference in performance between the P2000 and the P6000, or anywhere inbetween. Yes, there is a little bit of variance here or there – but nothing statistically significant. The RFO Benchmark constructs a fairly complex model, and differences in CPU performance are apparent in the benchmark, but all of the tested Quadro graphics cards performed identically at 1920×1080.

It was finding these results that inspired me to repeat the test at 3840×2160, to see if increasing the resolution showed any difference. Here are the results: 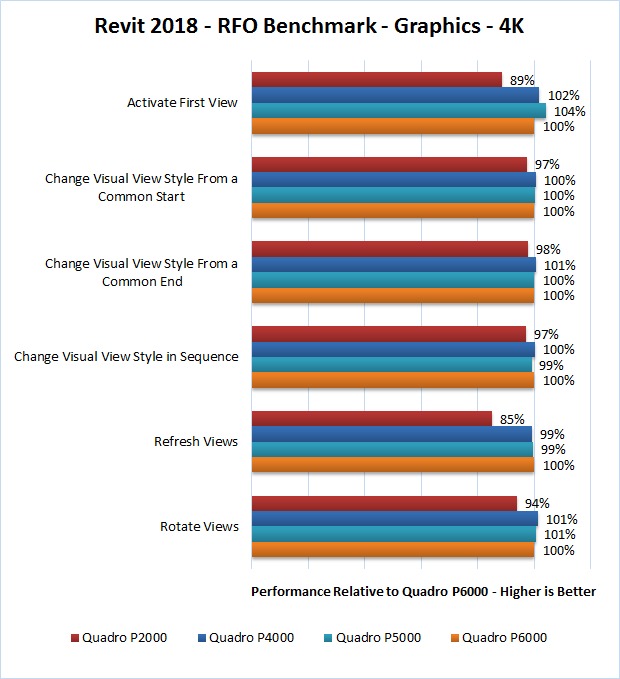 At 4K, the Quadro P2000 falls behind the other models. This difference varies from 2-15%, so it isn't huge – but it is enough that a P4000 or higher would be a good idea if you plan to use high a resolution monitor. The P5000 and P6000 showed no significant improvement.

The above graphs are clear: for most of Revit 2018, any of the Quadro cards from the P2000 on up will do just fine at 1920×1080 resolution. If you plan on running a higher resolution, or multiple monitors, the P4000 would be a better choice. Going above that has minimal benefit within Revit, especially considering the cost of higher-end Quadro cards.

We generally recommend sticking with graphics hardware that is officially supported by Autodesk, but as yet no Quadro cards are on that list for Revit 2018. Based on our testing, and past Autodesk certification lists, these cards should be fine choices for a Revit workstation. If you absolutely must run on Autodesk certified cards, then sticking with the 2017 version of Revit until they update their certification is also an option.

Because of the general split between rendering and modeling behavior, there is no single system that will be the best for all Revit use cases. That is why we have created two recommended workstations for Revit: one for general modeling & design and one with an emphasis on rendering performance. Both offer the full range of Quadro cards, though, as well as GeForce options for those who aren't concerned with official Autodesk support.