Skip to content
Always look at the date when you read an article. Some of the content in this article is most likely out of date, as it was written on September 8, 2017. For newer information, see our more recent articles.

A lot of our customers use software from Autodesk for various engineering disciplines, but aside from some basic specifications and supported video card lists, there is not much information available on what hardware actually performs best in these applications.

In this article we'll look at several Intel and AMD CPU options that you might consider in an engineering workstation to see exactly how they compare in Revit 2018.

If you are interested in how well different hardware works with Autodesk Revit, don't miss our article on Quadro GPU performance. We also have CPU and GPU articles focusing on Revit 2017.2 if you want to see how performance has changed (or not) from one release to another.

To see how the different Intel and AMD CPUs perform in Revit 2018, we used the following configurations:

These test configurations include seven CPU models across three different platforms. For modeling in general, we typically recommend a high clock speed processor, with less emphasis on the number of cores, although we opted to include the 6-10 core models from Intel's Core X platform as well as AMD's 8-core Ryzen 7 series. This provides three insights: first, we can see if there are any parts of the Revit 2018 workflow which benefit from additional cores. Second, we can see how much of an impact the lower clock speed that accompanies high core count processors will have on performance. Third, and lastly, we can see how AMD's Zen architecture compares to Intel – this is the first time we've included AMD chips in Revit testing here at Puget.

A note about RAM: even though the platforms we tested support different maximum memory configurations, that does not impact Revit performance. Our testbench systems are normally equipped with large amounts of RAM, but in reality only 16-32GB is needed for the vast majority of work in Revit and similar applications. We also selected memory speeds to match what Intel and AMD list as being officially supported for each platform, as we have found that higher frequency memory is more prone to failure.

We performed our testing using a near-final beta of the terrific RFO Benchmark. It is being updated to support Revit 2018, and while the version we used is not quite ready for public consumption the "Full_Standard" variant of the test worked just fine for us Within the RFO Benchmark, the results are broken down into the following categories:

The variant of benchmark we used performs three runs of each test and then averages the results. Those results are presented below.

As mentioned, the RFO Benchmark breaks down results into several categories. Some of these consist of many steps, so to provide an overview the results from those sections were totaled in the chart below. Performance is shown with the Core i7 7700K as a baseline. 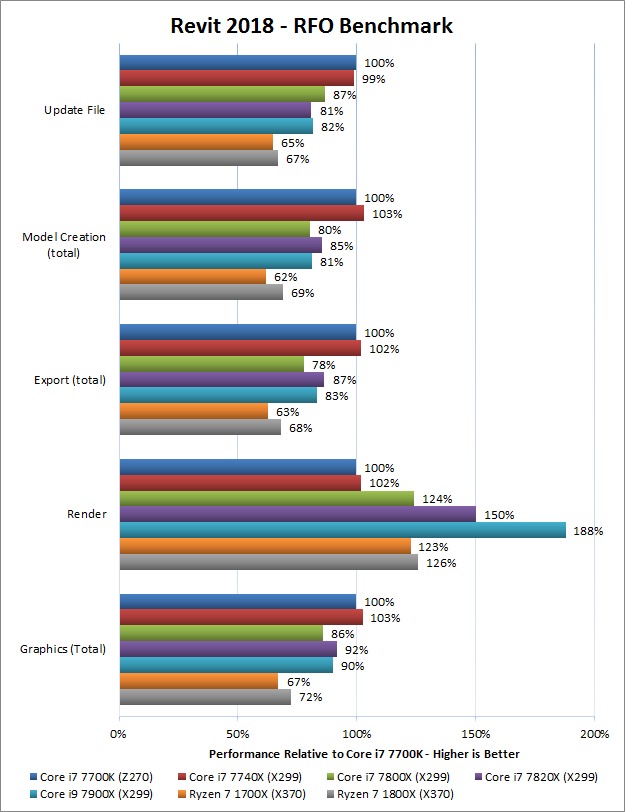 As expected, the high clock speed quad-core processors – specifically the Core i7 7700K and i7 7740X – took the crown across all categories except rendering. This fits with what we have seen in past testing of other lightly threaded applications, both those focused on engineering (Revit, Solidworks) and programs often used in content creation (Photoshop, Lightroom). Adding cores does not help with these workloads, and instead the performance drops because of lower per-core clock speeds. The amount of performance loss varies between about 10 and 40%, with AMD's Ryzen processors being the hardest hit.

However, in the rendering results we see the opposite. More cores are extremely helpful here, with more than an 80% average improvement with a Core i9 7900X 10-core chip. Scaling isn't perfect, but if rendering is something you find yourself waiting on more than general modeling tasks then investing in a more powerful (and expensive) CPU may well be worthwhile.

AMD's Ryzen chips also beat the Intel quad-core processors in rendering, but not by a huge margin, and they fall well behind Intel's higher core count models. Because of that and the large drop in performance they have in other areas we cannot recommend them for Revit. This also does not bode well for Threadripper, which we were not able to test this time around. Based on performance we've seen in other applications, Threadripper would likely do quite well with rendering in Revit – but would score around the same as the Ryzen chips in other, lightly-threaded situations. That means they would not do well for general modeling, exporting, and graphics tasks in Revit. Given Intel's options which have higher rendering performance but also maintain reasonable modeling speeds, those Core X processors are the better choice for Revit users who do want faster render speeds without giving up too much in general usage.

As shown above, Revit responds best to high clock speeds for most standard workloads. For modeling, exporting, and standard graphics work an Intel Core i7 7700K or 7740X is best. The 7740X is slightly faster, but requires a more expensive platform (X299 instead of Z270). That also limits the size of systems it can be used in, as most X299 boards are full ATX / tower size. Because of that, our go-to CPU is still the 7700K. It can be built in a more compact and affordable system, easily making up for the tiny 1-3% loss in speed.

The one exception is rendering, where higher core count processors like Intel's i7 7820X and i9 7900X are far faster than the quad-core models. If rendering is a majority of your workload, it is worth considering whether such a processor will fit in your budget. You will lose a little performance in general Revit usage, but stand to nearly double rendering speed (with the 7900X, at least). Intel has even more Core X processors coming later this year, which could further increase rendering speeds as well.

Because of this split between rendering and modeling behavior, there is not single system that will be the best for all Revit use cases. That is why we have created two workstations for Revit: one for modeling & design and one with a focus on rendering performance.