Skip to content
Always look at the date when you read an article. Some of the content in this article is most likely out of date, as it was written on September 6, 2017. For newer information, see our more recent articles.

OctaneRender, from OTOY, is a real-time, physically correct 3D rendering engine that uses GPUs (video cards) instead of CPUs for processing. This is a relatively new approach, as traditional graphics rendering was done on CPUs instead. Graphics processors are ideal for highly parallel tasks like rendering, though, and it is easier to fit multiple GPUs in a single computer than multiple CPUs.

However, care does have to be taken when putting more than one video card into a workstation: there needs to be space in the chassis, the right type of PCI-Express slots in the correct layout on the motherboard, a large enough power supply, and plenty of cooling. In this article we are going to look at several platforms – motherboard chipsets along with a matching CPU – to see how well they handle the scaling of performance in OctaneRender.

To see how the different platforms scale in OctaneRender, we used the following configurations:

These test configurations cover six major CPU platforms that are currently available, four from Intel and two from AMD. With the tested motherboards they support either 2, 3, or 4 GPUs at maximum – with a mix of x8 and x16 PCI-Express lanes per card, depending on the board and card layout. In our past testing with Octane we found that cards running with x8 vs x16 lanes made no substantial difference.

To determine performance, we ran OctaneBench 3.06.2 and recorded the results from each hardware combination. That test splits results into several sections, but rather than overwhelm readers with every number we opted to just report to the total scores. They are found in the chart below, separated by platform and the number of GPUs – which are color coded for easy cross-platform comparisons.

Here are the total scores from OctaneBench for the platforms and number of GPUs we tested: 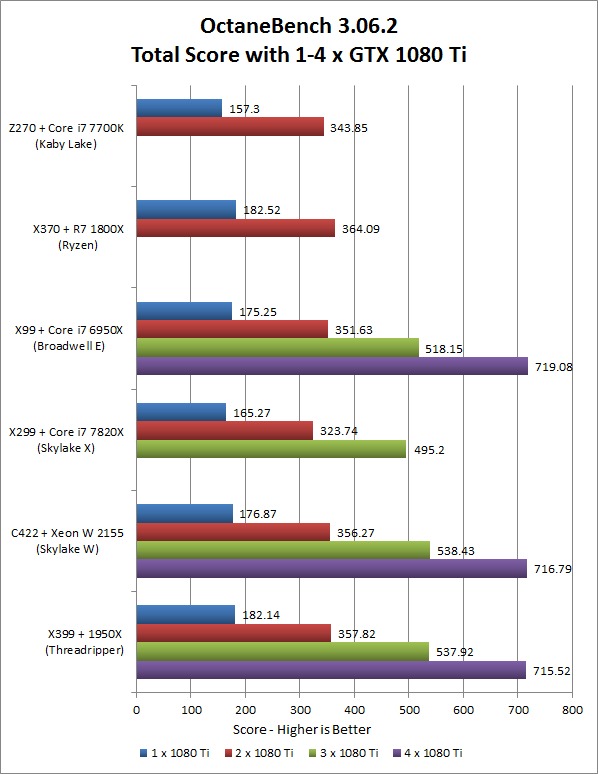 The main takeaway here is that the platform does not make a huge impact on performance. There are a lot of little variances, a few percentage points up or down, that are within margin of error. A couple of the larger differences are worth mentioning:

Based on our test results, the platform itself isn't a huge concern for Octane. All the major chipsets of today perform within a few percentage points of each other, with possible exception of X299 – which is still going through teething, and may well end up matching the rest in the end.

What does matter, though, is your budget and how many GPUs you want to use. If you are just going for one or two GPUs, even Intel's mainstream Z270 chipset will work – though you get a little bit of a boost with a higher-end platform, along with support for higher core count processors and more RAM. For three or four GPUs, you need a configuration with enough PCI-Express slots and lanes to support all of the cards. That limits the options somewhat, but both AMD's X399 / Threadripper and Intel's C422 / Xeon W are quite strong in that regard. Even the aging X99 platform does quite well here, and it has a solid track record of dependability.

As of this writing, no X299 motherboards are available yet which support more than three GPUs – but when they do come we will test them and publish updated results. If there are other platforms you would like to see tested, let us know in the comments!