Ultra-fast drives like the Samsung 960 Pro M.2 drive are rated for absolutely amazing performance (up to 3,500 MB/s!), but one issue with these drives is that they will throttle when put under a heavy load. When that happens, the speed of the drive is greatly reduced and in a worst case situation may even end up slower than a standard SATA-based SSD. In fact, this is a large enough issue that we already have several articles discussing the topic:

Since this is a pretty major issue, we wanted to see how the new Samsung 960 Pro compares to the previous 950 Pro not only in terms of raw performance but also how quickly the drive begins to throttle.

If you prefer to just see our conclusions, feel free to jump ahead to the conclusion section. 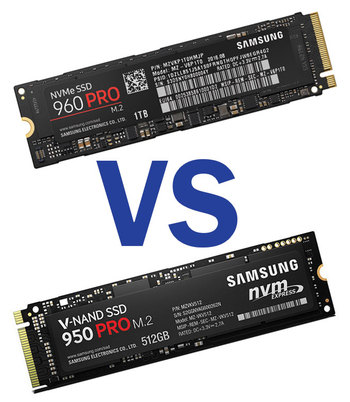 Before we get into our testing, we thought we would take a quick look at the specifications and performance Samsung is advertising for the 960 and 950 Pro. While there are a number of different models we could look at (256GB and 512GB for the 950 Pro, 512GB, 1TB, and 2TB for the 960 Pro), we are going to concentrate on the 512GB models since this is the only capacity that overlaps both product lines. If you are interested in the specifications for the other sizes, please visit Samsung's product pages for the 950 Pro and 960 Pro.

To see how the new 960 Pro compares to the old 950 Pro, we used the following hardware and software:

In order to thoroughly examine how the Samsung 960 Pro compares to the 950 Pro, we will not only compare the raw performance of both drives using CrystalDiskMark but we will also use IOMeter to see when - or if - they throttle under heavy load. Throttling during heavy use is something that has unfortunately been a major issue with these fast M.2 NVMe drives, so it will be interesting to see if the Samsung 960 is better or worse than the 950 Pro.

One thing you will notice is that we are not showing any temperature readings from the M.2 drives even though throttling is often due to the M.2 controller overheating. The reason for this is that the Samsung 950 and 960 Pro actually have two thermal sensors - one near the storage modules and one to control throttling. Unfortunately, the sensor that is read by every hard drive monitoring utility we tried is actually pulling from the thermal sensor near the storage chips, not the control sensor. The good part about this is that you can see if the drive is getting hot enough to potentially corrupt your data, but it makes these thermal readings an unreliable indicator of whether your drive is close to throttling or not.

To start our testing, we thought we would begin with the most routine of benchmarks: sequential read and write performance. The latest version of CrystalDiskMark added sequential performance with both no queue depth and a queue depth of 32, so we will look at both of these results. 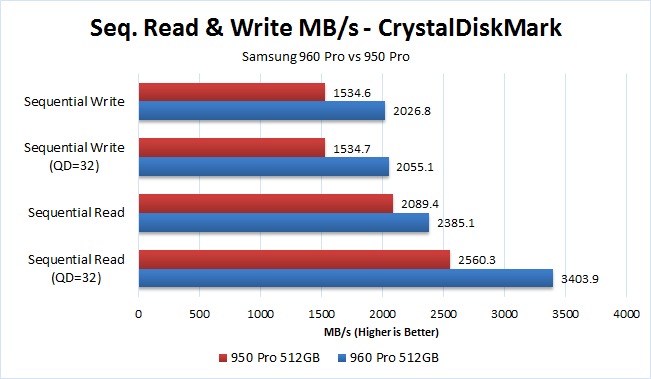 Samsung advertises sequential read speeds "up to 3,500 MB/s" and write speeds "up to 2,100 MB/s" which is pretty close to what we saw. Our results are a little bit under, but not by enough to worry about. Compared to the Samsung 950 Pro, there is a very nice bump in performance across the board with the 960 Pro clocking in at just under a gigabyte per second faster for sequential read, and just over half a gigabyte per second faster for sequential write. 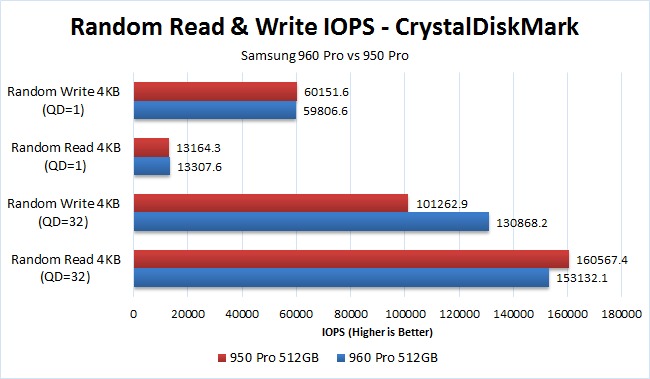 While random write with a QD of 32 performance is much better on the Samsung 960 Pro, it isn't quite the 3x increase over the 950 Pro that Samsung promises in their specs. However, Samsung has historically been pretty accurate with their advertised performance numbers, so this is likely simply due to Samsung using a different benchmarking utility than we are using.

For everything else, we are seeing pretty much what we expect. Both the 960 Pro and 950 Pro are rated for very similar random read and write performance (except for the noted faster random write 4KB with a QD of 32) so we didn't expect the 960 Pro to really pull ahead in any other category.

More than simply the raw performance the Samsung 960 Pro is capable of, what we really wanted to see was if Samsung was able to address the thermal throttling issues that NVMe M.2 drives (especially PCI-E x4 drives) have been plagued with since their conception. To see how the 960 Pro compared to the 950 Pro, we used IOMeter to continuously benchmark the performance of both drives while logging the performance over time. Keep in mind that this is putting the drive under 100% load for extended periods which is actually extremely rare for most workstations. 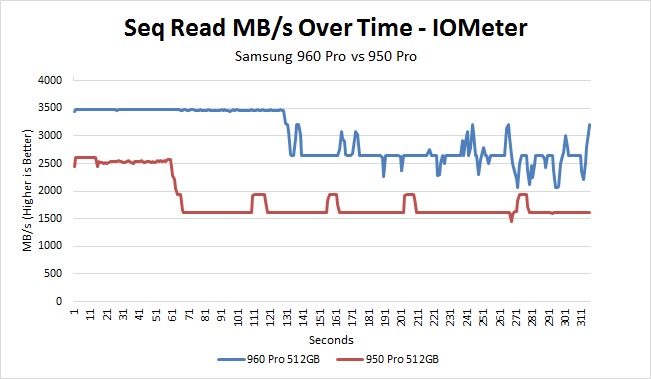 Starting with sustained sequential read performance, we get our first clue that Samsung has made some dramatic improvements regarding throttling. Not only does the 960 Pro take just over twice as long to throttle (~130 seconds versus 60 seconds), even after throttling it is still a bit faster than the 950 Pro is before it throttles. To put this into perspective, since the 960 Pro took 130 seconds to throttle and has a sequential read speed of ~3.5 GB/s, you should be able to read about 455 GB worth of data at full speed before the 960 Pro throttles down to "only" ~2.6 GB/s. 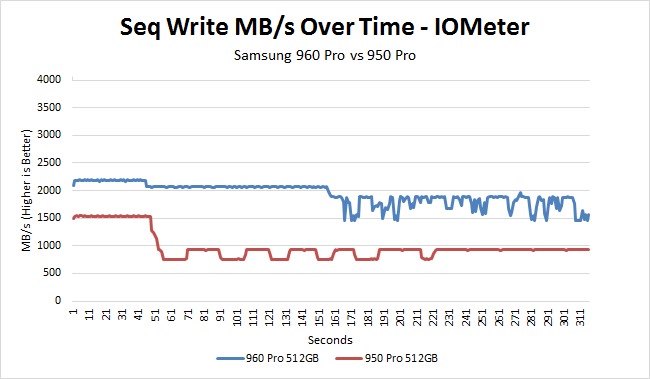 The results for sequential write over time performance are very interesting. Technically, both the 960 and 950 Pro started to throttle after about 45 seconds, but the 960 Pro only dropped from 2.2 GB/s to 2.1 GB/s. This isn't a very big drop, and likely something you would never even notice so for comparison purposes we are going to somewhat ignore this little dip. Keeping that in mind, the 960 Pro took about 160 seconds before it started to throttle significantly versus only 48 seconds for the 950 Pro. This means that not only is the 960 Pro significantly faster for sequential writes, it also takes more than three times as long to start throttling. At 2.1 GB/s, this will let you sequentially write about 336 GB of data before performance drops. However, note that even after throttling the 960 Pro was still faster than the 950 Pro at it's best. 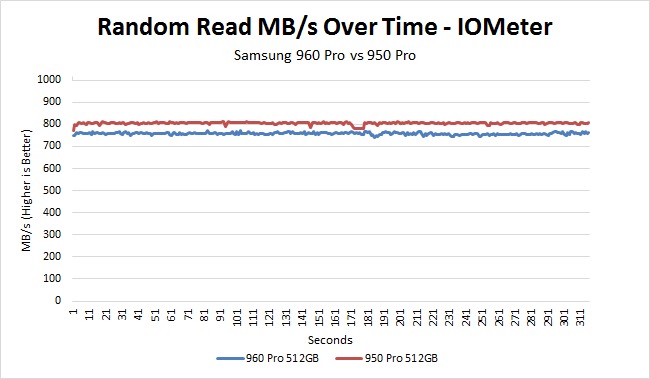 Random read was the one time we never saw significant throttling on the Samsung 950 Pro and it is good to see that the 960 Pro follows suite. Interestingly, the 960 Pro is actually a bit slower than the 950 Pro. This may be due to the fact that at the time of testing, Samsung did not have their Samsung 960 driver available, but the difference is not large enough for us to worry about. 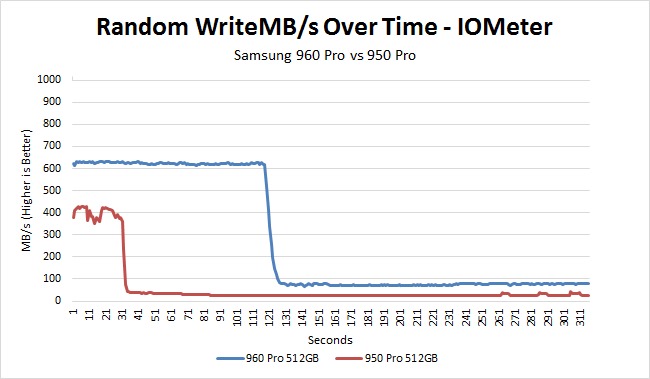 Unlike sustained random reads, we have seen extreme throttling for random write performance over time in the past. Once again, however, the Samsung 960 Pro is much improved over the 950 Pro. It takes about four times longer to start throttling (120 seconds vs 30 seconds) and while it still throttles to fairly low performance levels (~80 MB/s), even then it is still significantly faster than the 950 Pro.

Overall, the Samsung 960 Pro is an excellent improvement over the 950 Pro. Not only is the raw performance of the drive better, but Samsung has greatly improved how long the drive can handle heavy loads before throttling. It is still certainly possible to cause the drive to throttle eventually, but it takes long enough to do so that the vast majority of users would never encounter it.

We already listed the advertised performance of both the 960 and 950 Pro earlier in this article (and there was nothing in our testing to indicate they are incorrect), but we did want to give a summary chart for how quickly these drive will throttle:

While the fact that the 960 Pro takes much longer to throttle (2-4 times longer in fact) is terrific, what is really impressive is how much more data you can actually read or write before the throttling occurs. Since the 960 Pro is a faster overall drive, you can actually read or write between three and six times more data before the throttling kicks in. While that is great in and of itself, it also means that throttling in general is much less likely to happen. Sequentially writing 72 GB of data is hard enough to do at the 1.5 GB/s speed of the Samsung 950 Pro, and doing so for 336 GB of data at over 2 GB/s is going to be even more rare.

We don't quite want to say that thermal throttling is something you never need to worry about with the 960 Pro, but what we are willing to say is that unless you have a piece of software that is capable of reading or writing hundreds of GB of data at 2-3.5 GB/s, you are very unlikely to ever encounter throttling. And even if you do, when the 960 Pro throttles it tends to still be faster than the 950 Pro at it's best, so you probably would not notice the drop in performance.

Keep in mind that the throttling we saw was largely due to the controller on the M.2 drive overheating. Our testing was done with the system at idle, so if your system has a number of hot components and poor ventilation around the M.2 drive, a 960 Pro (or any M.2 NVMe drive for that matter) will likely throttle faster than what we recorded. If you are concerned about this and want to ensure your drive will never throttle, we recommend using a PCI-E adapter card with a built-in heatsink (we use the Bplus M2P4A here at Puget Systems) to help improve the cooling.