At Puget Systems, we spend a lot of effort tracking the failure rates of the parts we sell to make sure that each is living up to our quality standards. We pay very close attention to both sudden and gradual increases in failure rates, but we often don't give the most reliable components the credit they deserve. Today, we want to publish a short article to specifically call out one line of products for being the most reliable component we have ever sold: Samsung SATA SSDs.

Samsung SATA SSDs are by far the most reliable PC component we have ever sold at Puget Systems. 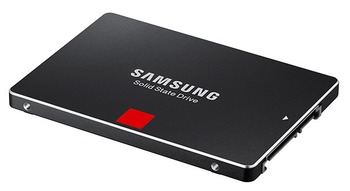 We have been selling Samsung SSDs since 2013, with the majority of our sales coming from their SATA-based 840 and 850 EVO/PRO lines of drives. We have also sold their M.2 drives, but they don't yet live up to the quality standard of the Samsung SATA drives so for the sake of this article we are going to leave those out. Samsung is known for using the latest in technologies to advance both the performance and capacity of their drives, but what we really want to focus on in this article is their incredible reliability. 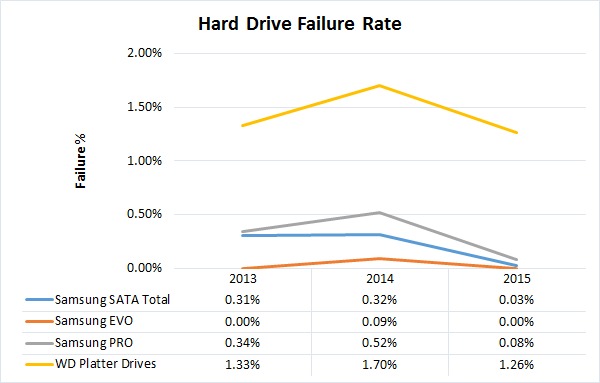 In the chart above, we have our overall failure rate for Samsung SATA SSDs in total as well as divided up between the EVO and PRO product lines. To act as a comparison, we also have the overall failure rate for the WD platter drives we carried which is a mix of their Blue, Green, Red, RE, and SE drives. Rather than going through this chart in detail, we want to simply make a few points:

If you total up all our sales of Samsung SATA SSDs since 2013 the total overall failure rate comes in at a tiny .18% or only 1 in every 550 drives having a problem. And if you only look at the failure rate since the start of 2015, this is reduced to just .03% which is less than 1 in about every 3,300 drives having a problem! This makes Samsung SATA SSDs by far the most reliable component we have ever sold. Just to put this into perspective, since 2013 WD platter drives have a failure rate of about 1 in 70 (1.41%) and Intel CPUs - which are the next most reliable component we have sold - have an average failure rate of roughly 1 in 240 (.42%). Both of these failure rates are actually very good, but Samsung SATA SSDs are actually twice as reliable as Intel CPUs and almost eight times more reliable than WD platter drives!

This isn't to say that Samsung SATA SSDs are perfect - in fact, there was a performance problem with the 840 EVO drives that took several firmware updates to fix. In addition, there is still a lot of questions as to whether SSDs or platter drives are better for medium to long-term storage. However, the overall .18% failure rate we have seen since 2013 is almost unheard of for any PC hardware component which is why we felt they deserved a special article just to praise Samsung for the great job they are doing with their SATA solid state drives.