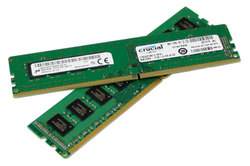 What is new in DDR4

From a physical standpoint, DDR4 is the same width as DDR3, but is slightly taller by about .9mm. The main physical difference between DDR3 and DDR4 is that DDR4 uses 288 pins compared to the 240 pins on DDR3 and the key is in a different location. In addition, the pins on DDR4 are actually not in a straight line but are slightly curved with the middle sticking out further than the pins on the end.

DDR4 brings a ton of changes, but there are four major improvements found in DDR4 SDRAM:

DDR3 RAM natively runs at 1.5V with low power modules running at 1.35V. Some manufacturers go outside of this, of course, but the majority of DDR3 RAM runs at this voltage. DDR4, however, natively runs at 1.2V with low power modules expected to run at just 1.05V. In addition, DDR4 supports a number of power saving enhancements including a new deep power-down mode to reduce power consumption when the system is in standby. The lower operating voltage and power enhancements allows DDR4 RAM to draw less power (and consequently run cooler) than DDR3 RAM.

From a performance standpoint, DDR4 RAM will start at 2133MHz (which is roughly the upper limit for DDR3) and is expected to eventually reach speeds as high as 3200MHz. In addition, DDR4 chips are able to be manufactured in densities of up to 16Gb (or 2GB) per chip which is double the density of DDR3. This means that we should start seeing consumer-grade DDR4 RAM in capacities of 16GB per stick and possibly as large as 64GB per stick for server-grade memory.

Like most new technologies, DDR4 isn't perfect. While DDR4 is still new, memory sticks are expected to be anywhere from 20-50% more expensive than an equivalent DDR3 memory stick. As demand increases we expect the cost to come down drastically, but for now DDR4 is simply going to cost more.

The second problem is that even though DDR4 RAM will run at a higher frequency than DDR3, the timings are actually much looser. While a DDR3-2133MHz stick normally runs at around CL10-CL11, current DDR4-2133Mhz sticks run at CL15. This isn't unusual and is pretty much exactly what we saw when DDR3 was introduced, but it does mean that DDR4 likely won't be any faster than DDR3 – at least at first. In fact, in our Core i7 5960X vs. 4960X Performance Comparison article Geekbench reported only slightly higher memory scores from the system with DDR4-2133MHz memory versus the one with DDR3-1600MHz memory (5691 versus 5382). Once higher frequency DDR4 memory becomes available and the timings tighten up a bit, however, we should start seeing the performance benefits of DDR4. 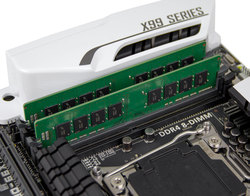 System memory is a very important aspect of modern computer systems, but as we've shown in the past RAM is simply not a bottleneck in most applications. Faster memory is certainly not a bad thing, but in our opinion the performance possibilities are not really the main benefit of DDR4 over DDR3. In fact, since DDR4 memory requires a completely different chipset and CPU from DDR3, it is actually very difficult to benchmark the performance benefits of DDR4 RAM. Right now, the more accurate comparison is actually comparing the entire DDR4/X99/Haswell-E platform to a DDR3 platform like we did in our Core i7 5960X vs. 4960X Performance Comparison article.

Rather than performance the two things we are most excited about with DDR4 RAM is the lower operating voltage and the increased storage densities. In our experience, lower voltage components run cooler than their higher voltage counterparts and are generally more reliable. There are of course exceptions to this, but as a general rule of thumb we have found it to be fairly accurate.

If we had to pick one aspect of DDR4 that we considered to be the most important, the storage density would easily be our choice. It is a very unassuming aspect of DDR4, but the fact that DDR4 memory should eventually be available in sticks that are twice the size of DDR3 sticks is almost a necessity for DDR4 in our opinion. As programs and data become larger and more complex, larger RAM capacities is going to become more and more important. Already, about 33% of the X79-based systems we have sold here at Puget Systems since January 2014 have maxed out the amount of memory that can be installed in the system by using 8x 8GB sticks or 64GB of RAM in total. This is a huge portion of our X79 sales, so once DDR4 RAM becomes available in larger capacities we fully expect DDR4 to become very desirable in high-end workstations.