Intel has announced a new line of processors, which follow in the footsteps of the socket 1156 chips which have been popular in mainstream systems for the last year. While the role of the CPU is not changing, there are several differences from Intel's previous generations. This article will explore the technology involved, in terms everyone can understand. 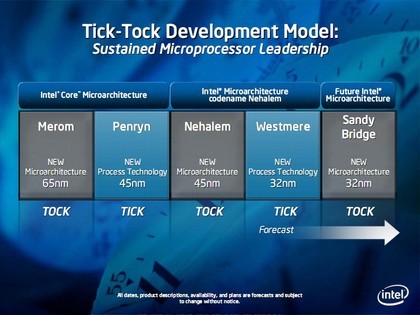 Over the past few years Intel has used what they call a "tick-tock" development cycle. They alternate between releasing a new, smaller manufacturing process (tick) and then after it has been in use a while launch a new microarchitecture at that same size (tock), repeating this process with each new generation. We've seen this with the Core 2 series of processors and more recently the Core i series, and now Intel is launching the next "tock": a new architecture they have code-named Sandy Bridge.

While the code name is what folks in the tech industry know this processor line as now, the actual shipping CPUs will have names similar to the current models: Core i3, i5 and i7, but with four digit identifiers rather than the three digits used today. There will also be some low-end models still using the Pentium brand name. Not all of the variants are launching today, but most should come out over the next few months - with another refresh (corresponding to a "tick" down to a smaller manufacturing process) in 2012.

This new series of processors builds on the technology already used in Core i-series chips, but it is different enough that it requires a new socket interface. Intel usually names their sockets after how many pins are present to facilitate communication with the motherboard, and this generation is no different: socket 1155 is here to replace the previous mainstream socket 1156. Even the similar number of pins points toward the close relationship of these processors to their predecessors, but they are definitely not just a drop-in upgrade for existing computers.

At launch, timed to correspond with CES 2011, Intel's plan for desktop processor naming is as follows:


The Core i7 and i5 variants are available now, with i3 and Pentium chips to follow in the following months. All of these have the same amount of L1 and L2 cache memory per core, but the L3 cache gets larger as you go up the product line.

Sandy Bridge processors will all have built-in Intel graphics processing units (GPUs), a change from the previous generation in which only dual-core models had on-chip graphics. Intel has upgraded their graphics offering quite a bit as well, and its tight integration with the rest of the CPU gives it access to the L3 cache in addition to the main system memory. These GPUs will support DirectX 10.1 and OpenGL 2.1, which are both a step behind the latest 3D standards, but should still cover the majority of software out there right now.

Support for video decoding is more current, though, with the capability to offload the majority video playback (even high-def Blu-ray movies) to the GPU. Intel calls the added hardware they included for working with video "QuickSync", and it also helps boost encoding speed greatly if software is built to support it. This combination of features makes Intel's integrated graphics solution ideal for a wide range of uses, including simple 3D work and gaming, but as always more advanced users may want a dedicated card for more performance. The downside is that QuickSync only functions if the onboard graphics are enabled, so some folks will have to decide if the tradeoff is worth it: sticking with Intel's graphics in order to have QuickSync, or adding a nicer video card for better 3D / gaming performance but missing out Intel's boost to transcoding speed.

A new set of CPU instructions is being introduced with these processors, aimed at speeding up tasks like encryption. The memory controller has been improved as well, now officially supporting up to 1600MHz DDR3 RAM, at capacities up to 32GB of total memory (four modules at up to 8GB each, when that size becomes available).

Many of the other key features on these chips are ones that the current Core i-series offer, like Hyper-threading and Turbo Boost. Hyper-threading is an older Intel technology, initially developed during the Pentium 4 era, which allows a single processor core to switch back and forth between working on two different threads very quickly - in effect minimizing processor downtime. The way this is implemented actually makes the operating system show twice the number of physical cores that are really present, but it doesn't fully mimic a second set of cores - so it is not a doubling of performance, but can offer a nice boost in highly parallel applications like video editing. In other situations, like games, it may not make any difference at all.

Turbo Boost also increases processor performance, in this case by speeding up the CPU beyond its normal clock speed when the situation warrants it. In that regard it is effectively a small, dynamic overclock - but done very intelligently, so that the clock speed only goes higher if it would benefit performance and not exceed thermal parameters. The amount of gain in clock speed also varies depending on the number of active processor cores. To compliment Turbo Boost, Intel has also implemented their aggressive SpeedStep technology which does the opposite: when the CPU is in an idle state, it slows the clock speed down and lowers voltage to reduce power consumption and heat output. This is done more aggressively on newer chips, and combined with the 32nm manufacturing process makes Sandy Bridge processors extremely power efficient - which in turn leads to lower temperatures and quieter operation under normal circumstances.

In addition to the main line of processors, Intel will be producing some variants with an extra character at the end of the model number. Those with a "S" are special low-power versions, but operating at similar clock speeds to the standard version. A "T" denotes an even lower-power model, in trade sacrificing some speed. On the other side of things, "K" means a model with twice the GPU horsepower an unlocked multiplier - effectively making it much easier to overclock and push beyond its designed parameters.

Accompanying these new processors will be a series of chipsets, with varying features depending on their target market (enthusiasts, multimedia, business, and general use). Most of them will have one or two SATA ports supporting the latest 6Gbps specification (SATA III), along with several of the older 3Gbps (SATA II) ports. USB 3.0 is not going to be included, so motherboards with that connection type will still depend on add-on chips to provide it. A large number of USB 2.0 ports will continue to be available from these chipsets. Motherboard manufacturers also have the option to add things like audio, Firewire, Bluetooth, and networking as they wish, and the boards we are offering all have excellent blends of connectivity options. 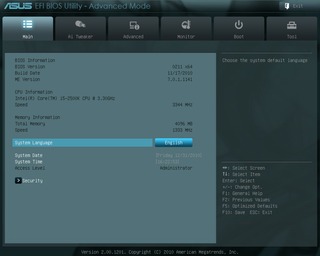 One advancement some motherboard makers are choosing to have coincide with this launch is a move from traditional BIOS utilities to the newer Extensible Firmware Interface. This provides improved capabilities, and a more modern way to interact with basic system settings, including support for a mouse at that level rather than being keyboard-only. This may be a surprise for many computer users, as the legacy BIOS interface has been very similar on most computers for the last couple of decades. To the right is a screenshot of what the new 'EFI BIOS Utility' looks like on an Asus motherboard.

Processors, and computer hardware in general, are constantly being improved - but nonetheless any time Intel launches a new architecture is particularly exciting. Sandy Bridge promises to bring improved performance, efficiency, and features to the next generation of computers. Here at Puget Systems we are looking forward to providing systems based on this technology to our customers!