Skip to content
Always look at the date when you read an article. Some of the content in this article is most likely out of date, as it was written on June 16, 2021. For newer information, see Unreal Engine 4.26 - NVIDIA GeForce RTX 3080 Ti Performance

The RTX 3080 Ti offers nearly identical performance to the RTX 3090 for a lower price, as long as VRAM is not an issue. However, stability issues were seen in projects that require large amounts of VRAM, specifically those used for Virtual Production or ArchViz. Those that need less than 12GB of VRAM can get similar results to the existing RTX 3090 but at a lower cost. Hopefully, a new driver will fix the stability issues, but even so, users working with large scenes would be better off opting for the RTX 3090.

Professionals using Unreal Engine have a wide range of needs when it comes to the GPU. Some on the Game Development side don’t need much power because their target audience probably isn’t running the latest hardware. Meanwhile, some of those in the ArchViz or Virtual Production space may want every bit of graphical power they can get. For some, 12GB of VRAM may be more than plenty, while others need all 24GB available in the RTX 3090. In this article, we’ll look at performance in a variety of scenes to see how the new RTX 3080 Ti stacks up to the existing GeForce line. 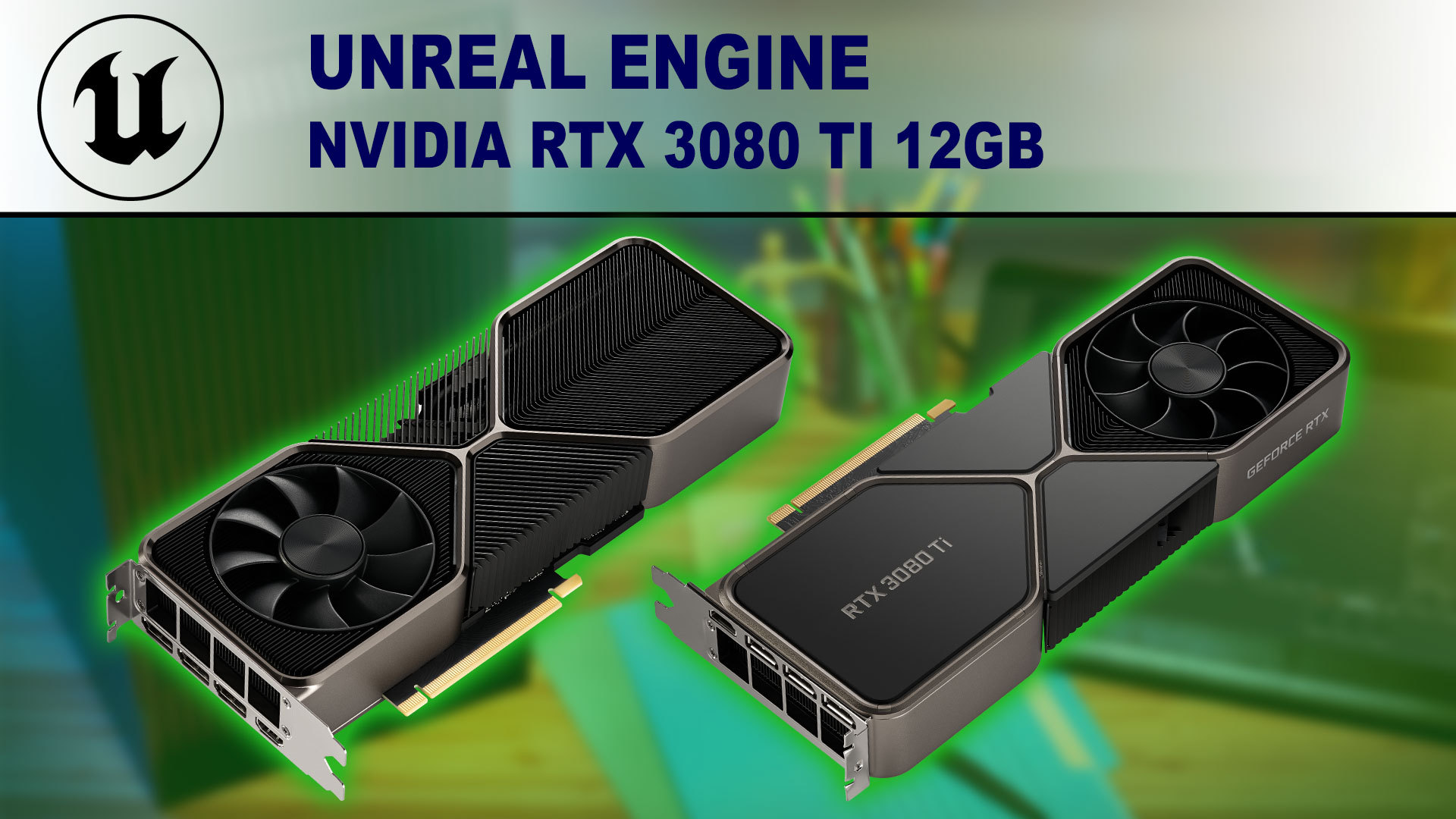 Megascans Apartment – high-end game quality assets and lighting. Both with and without Ray tracing

Overall, the raw performance of the RTX 3080 Ti is quite impressive and lines up about where you would expect given its specifications. In most cases, it nearly matches the RTX 3090. This is certainly an interesting card for many Unreal Engine users. It offers nearly identical performance to the RTX 3090 for a few hundred dollars less. On the other hand, it is considerably more expensive than the standard RTX 3080, and that extra cost may not be worth the modest 10-12% bump in performance. 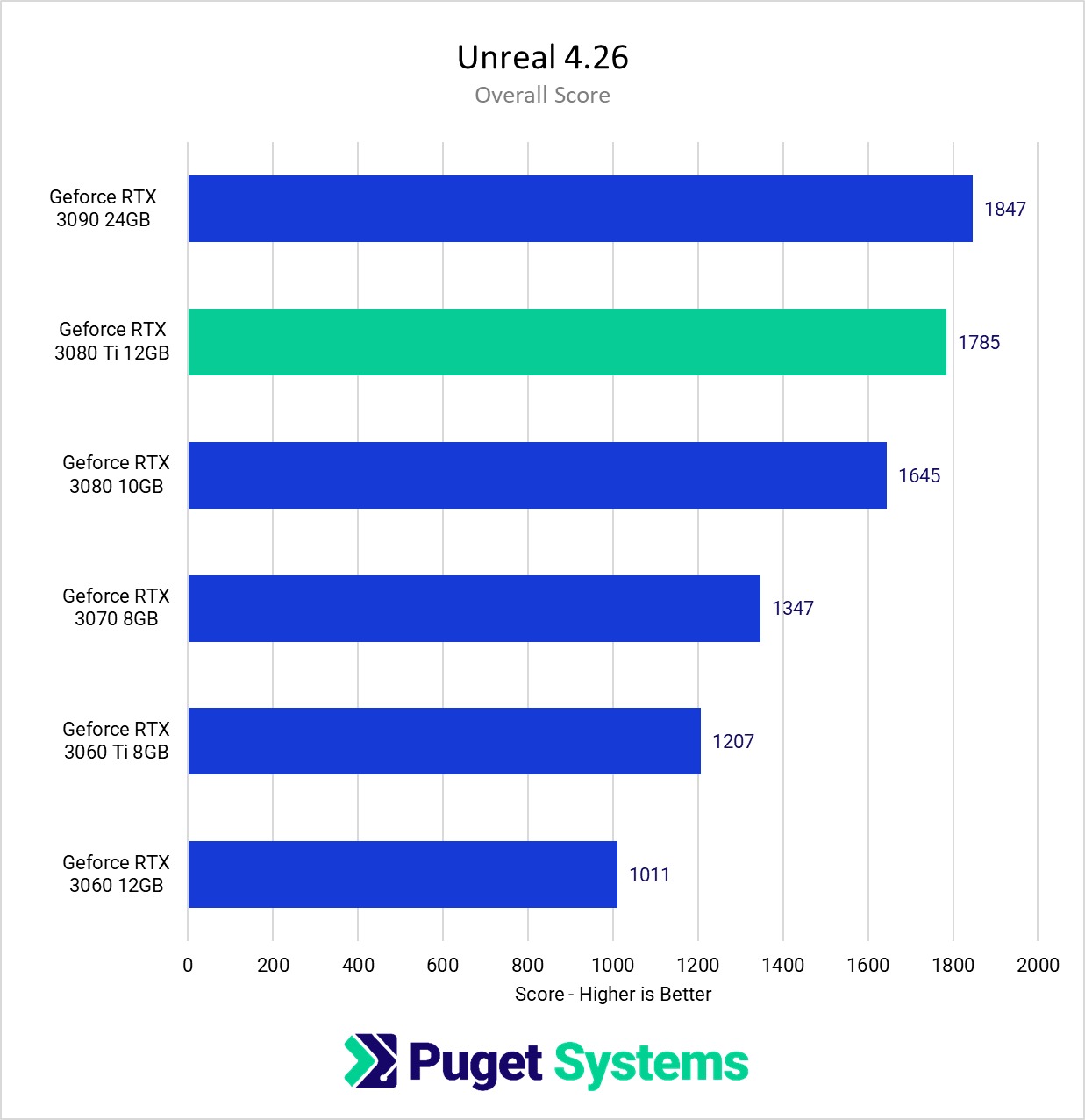 Averaging the performance over several projects and at multiple resolutions gives us a good overall representation of how a particular video card compares to other video cards. However, each industry has its own specific needs and requirements that can give us a more nuanced view of how useful that card is to those industries. 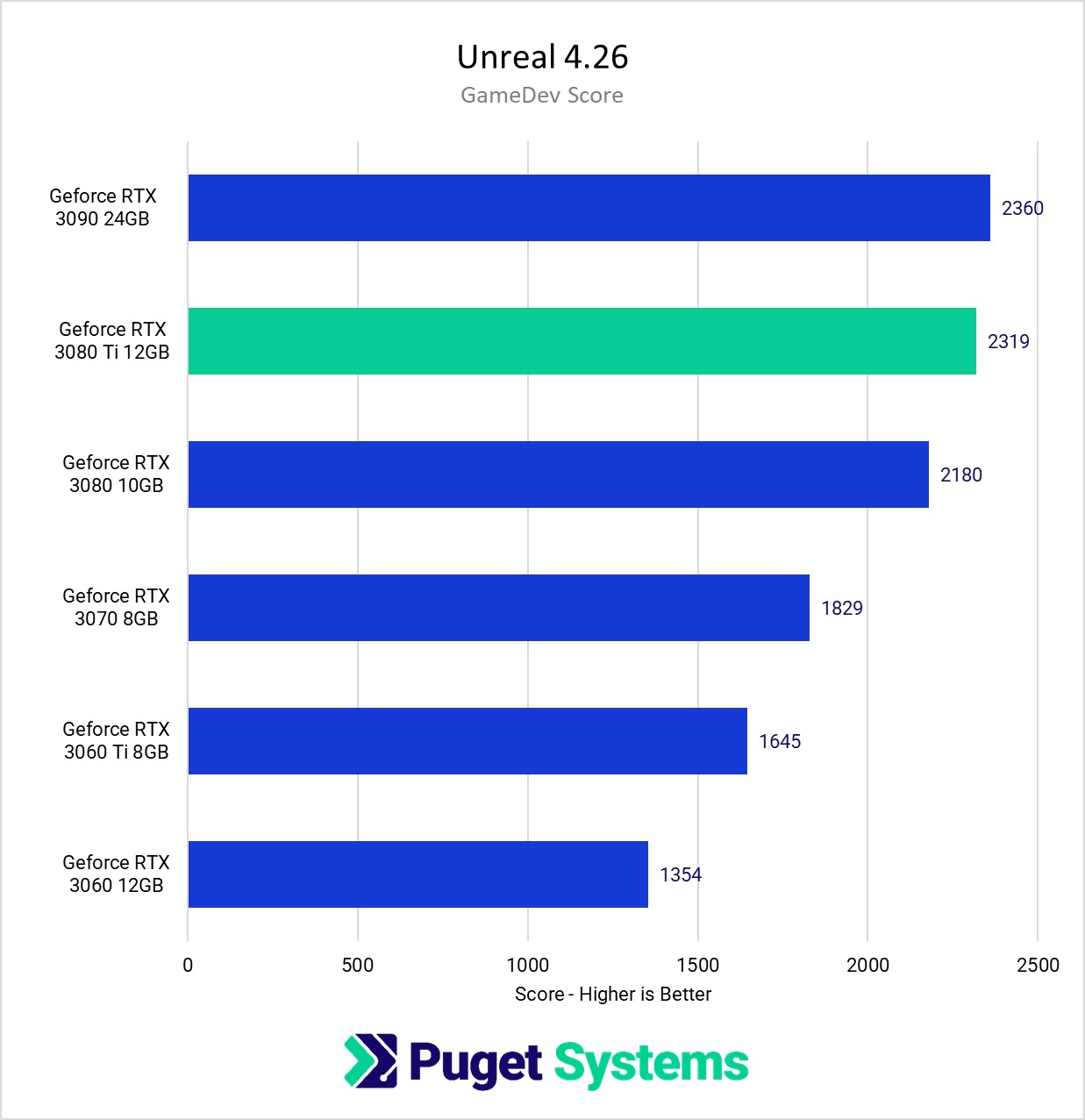 Game Development is usually less concerned about GPU performance than the people actually playing the games. Better FPS in your viewport doesn’t make much difference past a certain point, say 30-60 FPS. And if you can only manage 30 FPS in your game while using a 3090, not many potential consumers of your game will be able to play with acceptable frame rates. GameDev also doesn’t push the VRAM too far for the same reason. If your target consumer has 4-8GB of VRAM, then using 24GB isn’t going to help you. As we can see from averaging out the GameDev scenes from our tests, the RTX 3080 Ti is roughly 10% faster than the current RTX 3080, and almost tied with the RTX 3090. 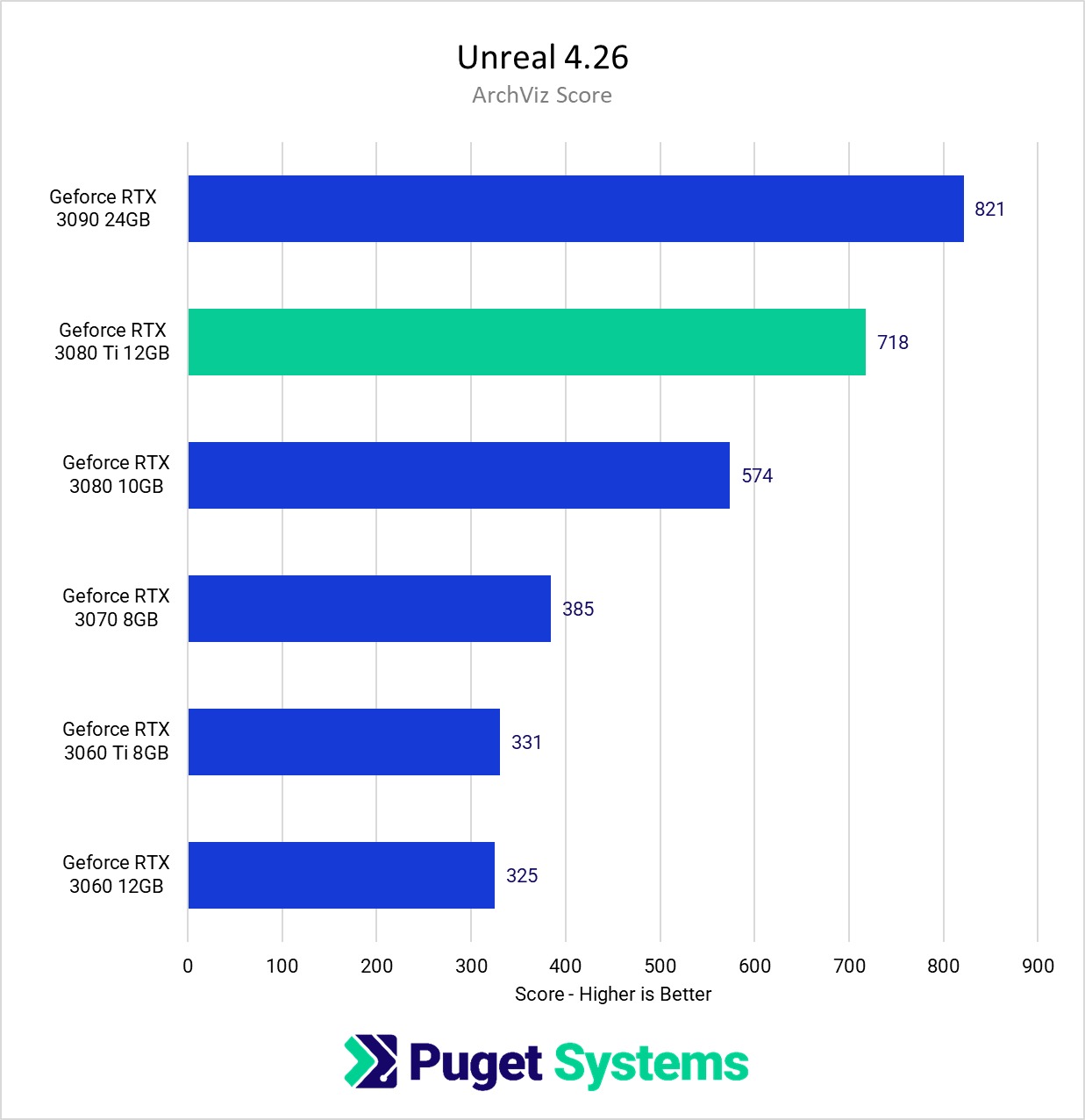 ArchViz leans a bit more toward baked lighting than real-time for performance reasons. Either way, a hallmark of ArchViz is nightly detailed models and large textures. This causes a bigger need for VRAM than we see in GameDev. For this reason, we see the RTX 3080 Ti both gain in score over the RTX 3080 but lose ground to the RTX 3090. One of the two scenes used for this score saw the system crashing while running in 4k. This is likely due to a driver issue, so hopefully, that will be fixed in time. For ArchViz, we would still recommend the RTX 3090 because it has double the VRAM of the RTX 3080 Ti. Running out of VRAM will give significant performance penalties to your projects. 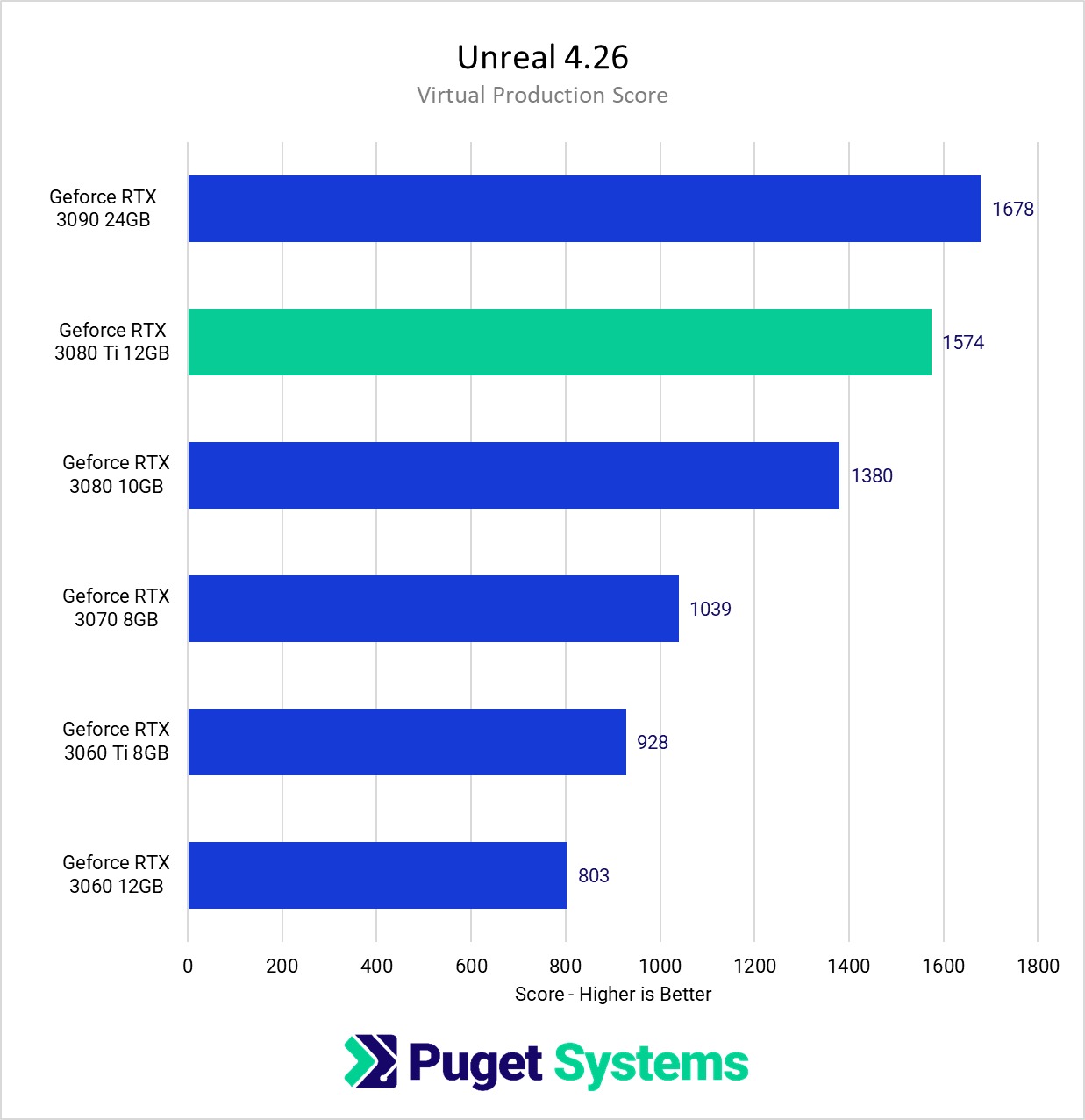 Virtual Production runs the gamut from simple scenes with minimal geometry and textures, to cinematic quality assets needing huge amounts of VRAM. On the simpler side of Virtual Production projects, we see the RTX 3080 Ti nearly tie the RTX 3090, just as we did with Game Development. On the upper end, with cinematic quality assets, we saw the RTX 3080 Ti gain ground over the 3080 due to the increased VRAM, but lose ground to the 3090 for the same reason. We also saw the stability issues here in one scene while running at 4k. The massive 24GB of VRAM available with the RTX 3090 is still the best choice for high-end virtual production workflows. See the next section for more details on high VRAM usage.

A note on High VRAM usage

When the project needs a significant amount of VRAM, as is often the case with Virtual Production or ArchViz workflows where high resolutions and ray tracing are required, we see the RTX 3080 Ti gain ground over the RTX 3080, and then falter a bit. The Megascans Temple scene consumes quite a bit of VRAM. When running at 1440p, VRAM usage hovers between 12-15GB, while at 4K, it will spike just over 20GB. At 1080p, we see the RTX 3080 TI performing 40% faster than the standard 3080, and almost triple the speed at 1440p. That extra 2GB of VRAM is just enough to help. 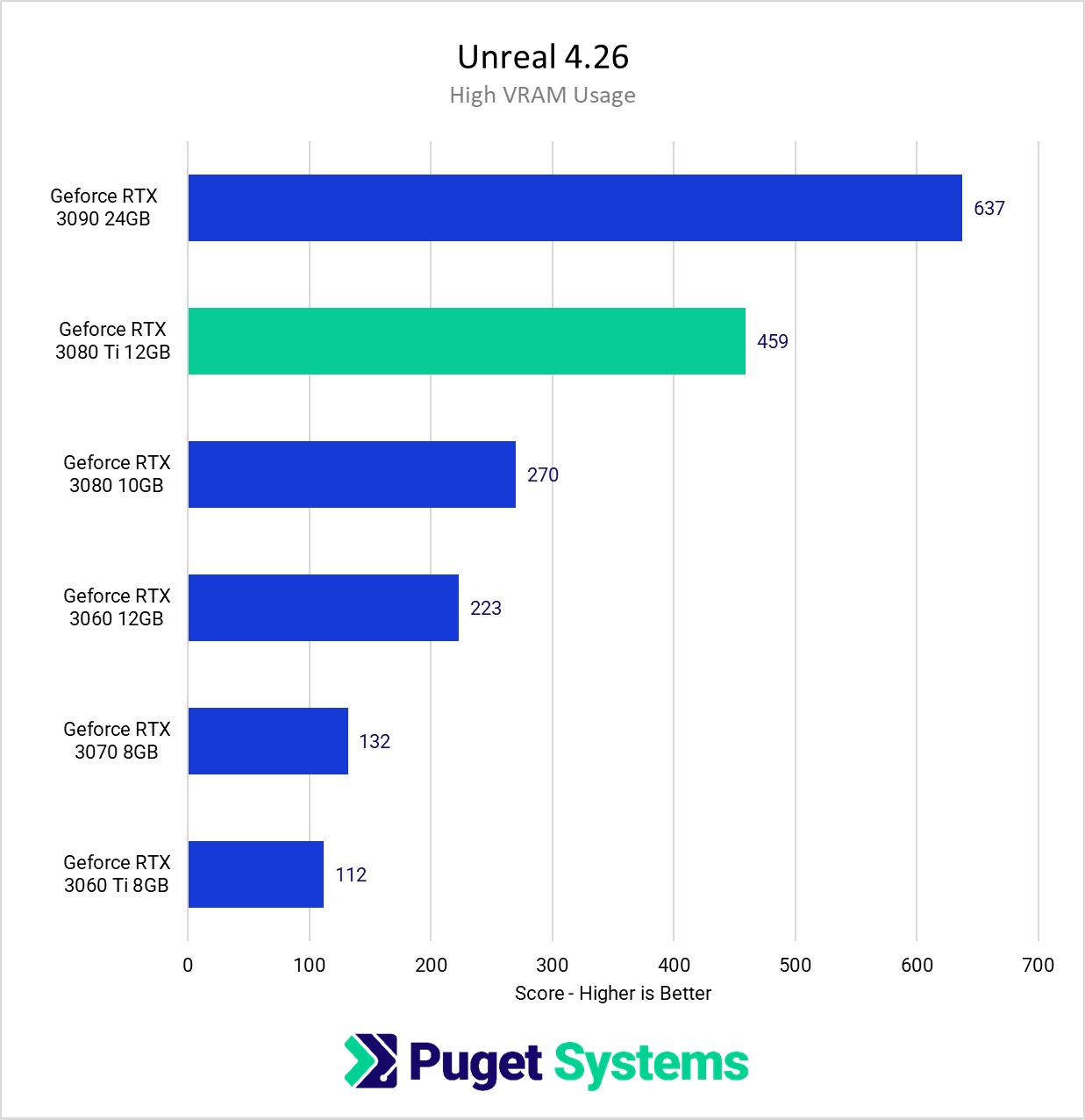 However, at 4k things took a turn for the worse. The RTX 3080 Ti would cause the system to crash to a blue screen. Usually in Unreal Engine, when the VRAM is used up it will overflow to system RAM with a significant performance hit, or the Engine would crash. Having the entire system crash is a bit alarming. This was replicated with multiple cards, on both the Studio and Game Ready drivers. The exact same system with a standard RTX 3080, 3070, or even 3060 was able to complete the tests without crashing. The 3080 Ti requires studio driver 462.65, which is a very unusual driver in that it does not support the RTX 3090. We’ve passed this information along to NVIDIA, and hopefully, we’ll have a new driver soon that both fixes this issue, and unifies all cards to the same driver. Until then, we cannot recommend this card to anyone with very large scenes.

How well does the NVIDIA GeForce RTX 3080 Ti 12GB perform in Unreal Engine?

The RTX 3080 Ti offers nearly identical performance to the RTX 3090 for a lower price, as long as VRAM is not an issue. However, stability issues were seen in projects that require large amounts of VRAM, specifically those used for Virtual Production or ArchViz. Those that need less than 12GB of VRAM can get similar results to the existing RTX 3090 but at a lower cost. Hopefully, a new driver will fix the stability issues, but even so, users working with large scenes would be better off opting for the RTX 3090.