Skip to content
Always look at the date when you read an article. Some of the content in this article is most likely out of date, as it was written on May 11, 2014. For newer information, see our more recent articles.

Looking for information on newer chipsets? We have multiple articles you may be interested in:

The Z97 and H97 chipset have recently been added to Intel's line of chipsets, replacing the previous Z87 and H87 chipsets. These new chipsets don't add much in the way of additional features (as we covered in our What is new in Z97 and H97 article), but they still have a couple of key ways in which they are different from each other. In this article we will take a look at the specifications for the Z97 and H97 chipsets and compare them to each other.

From an official chipset perspective, there are only two differences between Z97 and H97 chipsets. The first is the fact that the Z97 chipset supports CPU overclocking, while the H97 chipset does not. Secondly, the Z97 chipset has the ability to split up the 16 PCI-E lanes from the CPU which allows for SLI/Crossfire video card configurations.

Both chipsets include support for PCI-E M.2 which is a relatively recent improvement to mSATA. Just like mSATA, M.2 allows for the connection of storage devices (like SSDs), except mSATA which used an existing PCI-E Mini Card slot, M.2 uses an entirely new physical connection. This redesign will allow storage manufacturers to be more efficient with their designs and let them to cram more total storage capacity into a smaller footprint. 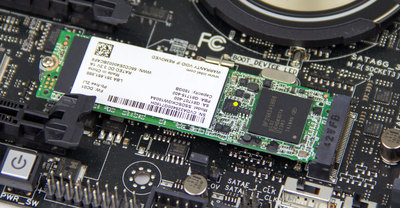 In addition, M.2 allows for devices to be connected through either a SATA III 6Gb/s port or directly through the PCI-E bus. While most M.2 SSDs currently on the market connect through the SATA controller, future devices should bypass the SATA controller entirely and use the PCI-E bus instead. Theoretically, this should allow for transfer speeds up to 2GB/s compared to the current SATA III 6Gb/s specification which only has a peak of about 600MB/s

As far as their additional feature sets, Both Z97 and H97 support Rapid Storage Technology, Smart Response Technology (otherwise known as SSD Caching), six SATA 6Gb/s ports and six USB 3.0 ports. Finally, both chipsets support two DIMMs per memory channel so they are able to utilize up to four sticks of RAM.

While the H97 may sound like the ideal chipset for the majority of our customers, we have found that the Z97 motherboards are almost always a better fit. Since Z97 is the top chipset, manufacturers tend to include ports and headers on those motherboards that are not on their H97 equivalent. Often times just a couple of additional ports can make the difference between a motherboard working for a customer out of the box or needing to use add-on PCI-E cards to get the proper functionality. These cards can give a customer the functionality they want, but they usually don't perform as well as onboard ports and add more points of failure which may lead to system instability. For that reason, we always recommend to get as much functionality as you can from the motherboard itself and only use PCI-E cards when absolutely necessary.