Skip to content
Always look at the date when you read an article. Some of the content in this article is most likely out of date, as it was written on September 27, 2018. For newer information, see our more recent articles.

After Effects has had a bit of a rocky relationship with video cards ever since GPU acceleration was added back in 2015. At that time, After Effects dropped support for the "render multiple frames simultaneously" (which allowed for efficient use of high core count CPUs) in part to make way for GPU acceleration. While obviously frustrating for users who had invested thousands of dollars in dual Xeon workstations, for most users this resulted in great performance improvements at little to no cost. But even with the improvements made to AE's GPU acceleration over the years, there has been little reason to use more than a mid-range video card.

However, NVIDIA's new RTX series cards are here and they bring to the table two new features that may finally give you a reason to invest in a high-end GPU for After Effects: Tensor cores and RT cores.

RT cores are brand new in this generation of graphics cards, and are specialized for a single type of operation: ray tracing. It is possible that Adobe may utilize these cores for ray tracing in After Effects – or Maxon may use it in Cinema 4D – but if or when they will take advantage of these RT cores is currently unknown. 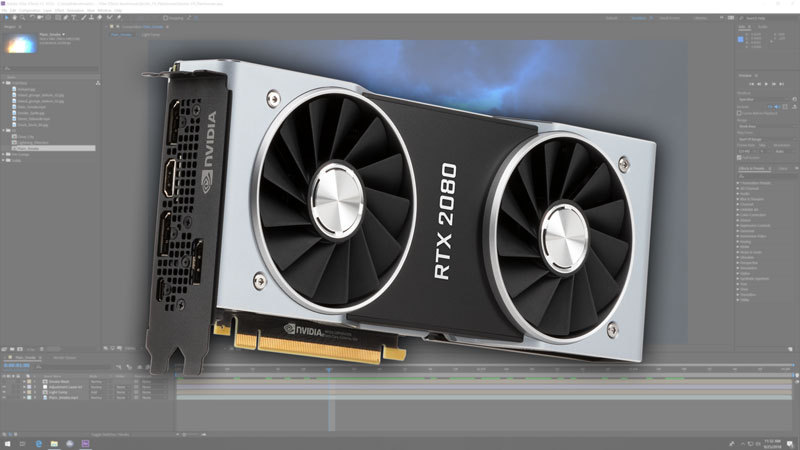 To see how the new RTX cards perform in After Effects, we tested it against a selection of cards from NVIDIA as well as AMD's Vega 64 GPU. 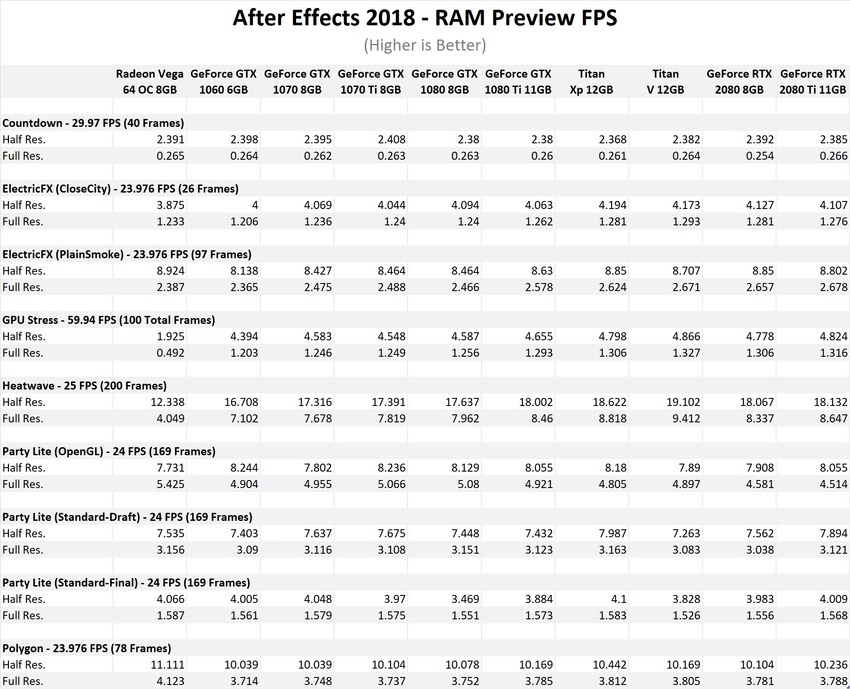 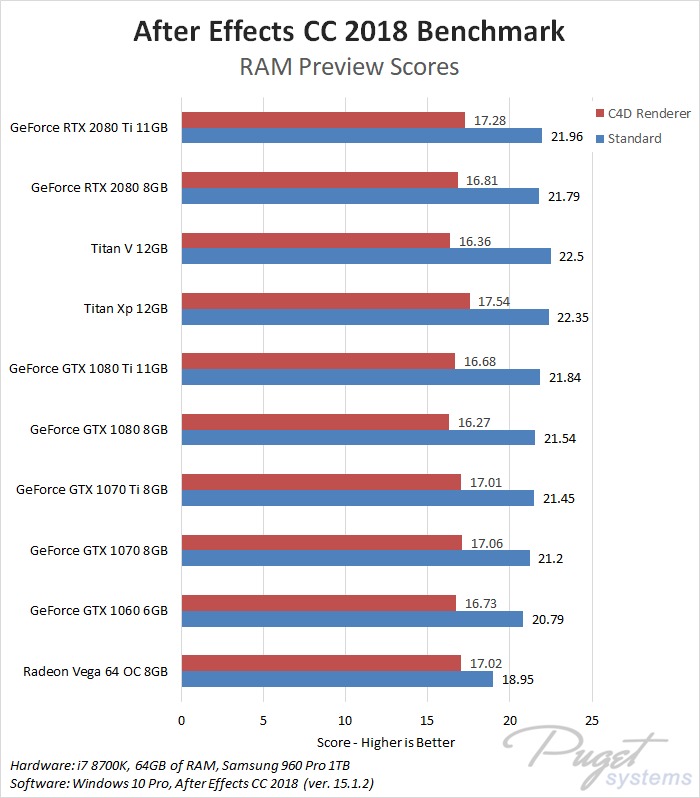 As we expected, since the C4D rendering engine relies almost exclusively on the CPU there was almost no difference in performance between each GPU for those projects. For the standard projects, however, there is a small benefit to using a more powerful GPU, but it isn't very much. Here, we saw a small gain in performance up to about the GTX 1080 Ti – after which the results were pretty much within the margin of error for this test. This means that we only saw a whopping 5% performance gain with the new RTX cards over the much more modest GTX 1060 GPU. 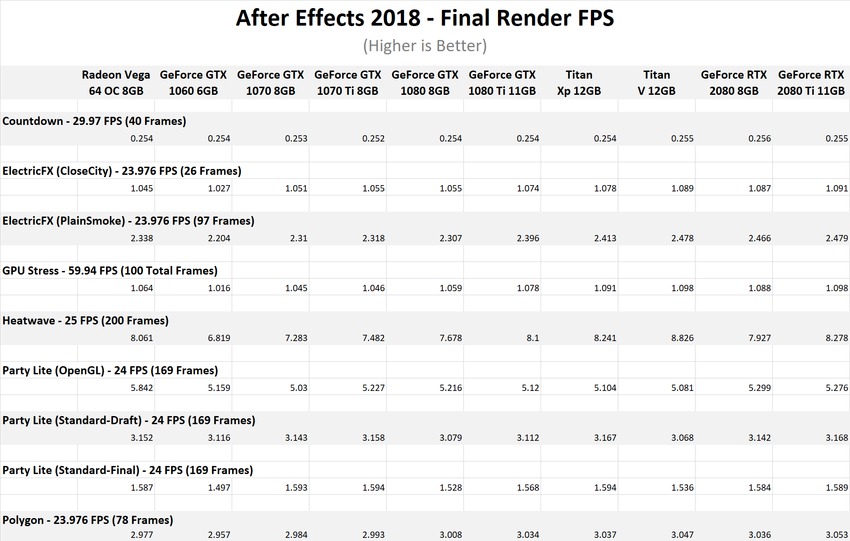 Once again, since the results may vary based on whether or not you utilize the Cinema 4D CPU renderer, we have separated our testing results between "standard" projects and those utilizing the C4D renderer: 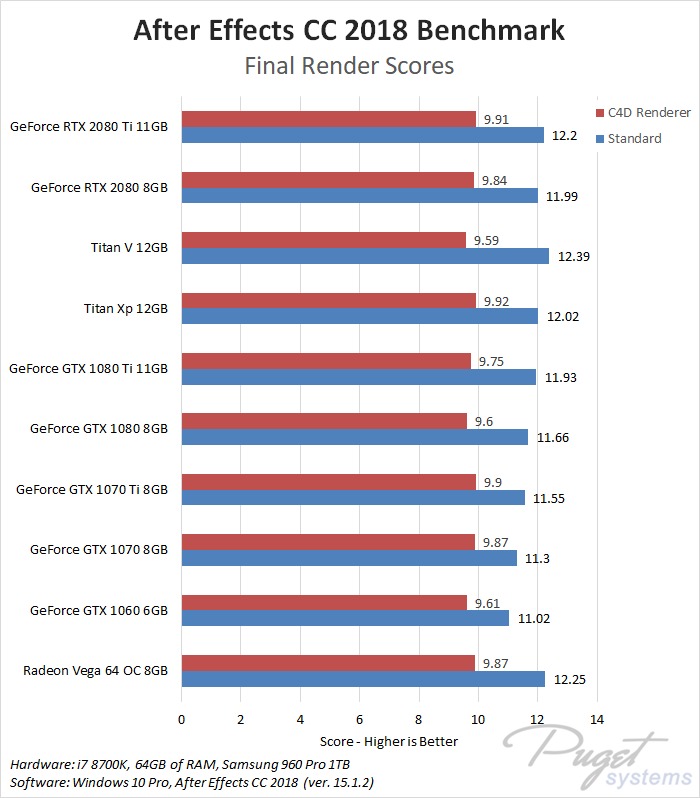 For the final render (or export), we saw a bit larger of a performance gap between each of the cards. The Vega 64 GPU also surprised us a bit here, performing right in line with the top-end NVIDIA cards. Once again, however, we seem to top out at about the GTX 1080 Ti and above since the GTX 1080 Ti, Titan Xp, Titan V, and the new RTX cards all performed about 10% faster than the GTX 1060.

Are the RTX video cards good for After Effects?

GPU acceleration is relatively new to After Effects, and it still shows in how well (or not well) it is able to utilize high-end GPUs. While the RTX 2080 and 2080 Ti are certainly not bad for AE, they probably aren't worth purchasing for their raw performance alone. 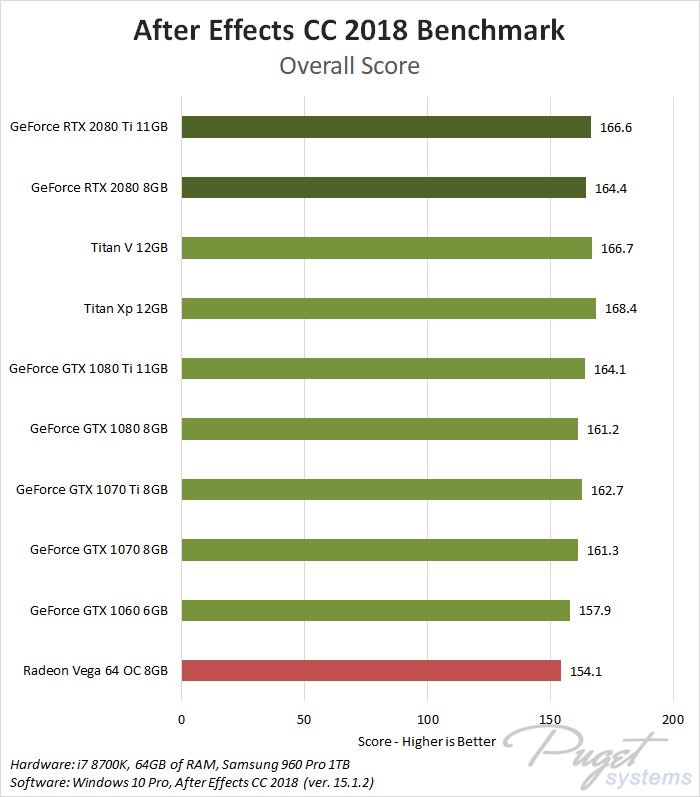 In terms of pure performance, the new RTX 2080 and 2080 Ti perform on par with the GTX 1080 Ti and slightly under the Titan Xp and Titan V. However, the question is not really whether they are good today, but whether the RTX GPUs will be good for After Effects in the future. The new RT and tensor cores could potentially have significant performance advantages for some tasks, but it all depends on when or if the After Effects developers are able to make effectively use of these new features. Given how long it has taken for GPU acceleration to make it into After Effects in the first place, our guess is that it will be quite a while before we see significant performance gains from the RT and tensor cores, but there is really no way to know for sure.

Overall, while not really necessary for After Effects alone, if you already need a new high-end GPU for other applications (Premiere Pro, GPU-based rendering, etc.) we would recommend using one of these RTX cards if possible. The RTX 2080 does have less VRAM than the comparably priced GTX 1080 Ti (8GB vs 11GB), but the potential these cards offer for the future is likely worth investing in.