Choosing the right PC for your needs can be a daunting task, but here at Puget Systems, we do our best to help you understand how different applications (like After Effects) utilize the various types of hardware found in workstations. Not only do we have a number of on-going series of hardware articles for those that want to get deep into the details, but we also have our solutions pages that are intended to distill all our research and testing down to what matters most. Not to mention various other resources like our Youtube channel and podcast.

Today we will be tackling that question in regards to Adobe After Effects – an incredibly popular application for both motion graphics and VFX. In many ways, After Effects is fairly straight-forward from a hardware standpoint, wanting a CPU with high per-core performance and plenty of RAM, but other hardware choices like the GPU and storage can make a big impact as well. 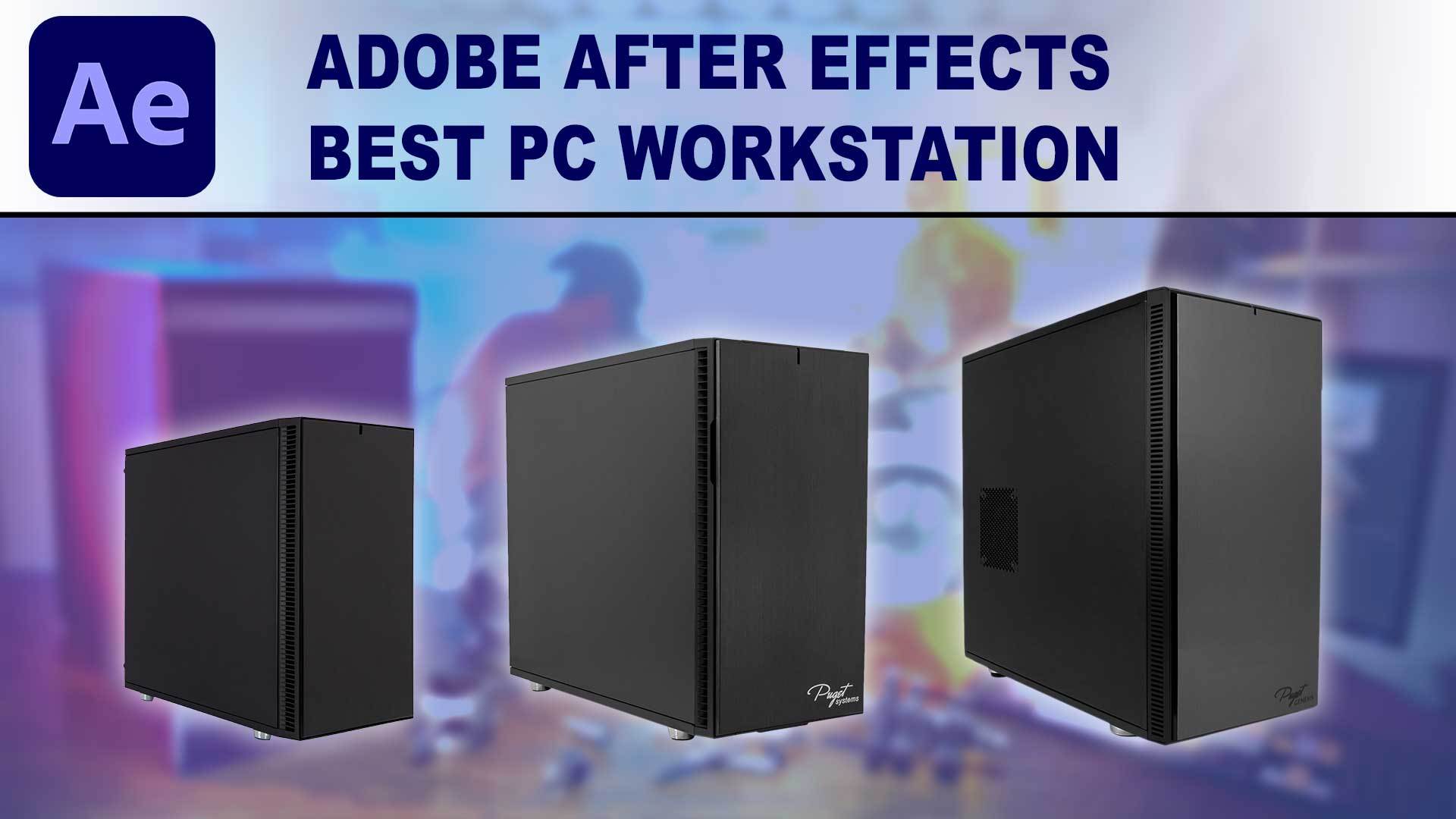 Something to note is that we are going to primarily focus on the hardware that will directly affect performance. Things like a Blackmagic Decklink card to drive a calibrated reference display (especially since After Effects does not support 10-bit displays through the GPU), 10Gb networking, and peripherals are all incredibly important, but outside the scope of this post.

If you want to get into the details about why we are making specific recommendations over other options, we have a number of recent technical articles that you may be interested in:

We'll start off with a solid workstation for After Effects that will give you terrific performance without breaking the bank. Central to the configuration is the AMD Ryzen 5800X 8 Core which is currently about 20% faster in After Effects compared to a similarly priced processor from Intel. It is also a good amount faster than the next model down (the Ryzen 5600X), making it well worth the cost to be our "entry" CPU option.

On the GPU side, while After Effects can take advantage of the video card to process GPU-accelerated effects, you are almost always going to be limited by the performance of your CPU. We have found in our testing that even a mid-range GPU will be similar in performance to a high-end one. Because of this, we will be using the NVIDIA GeForce RTX 3070 8GB on this configuration.

For the system memory, we will be using 64GB of RAM since After Effects is a very memory hungry application. Each frame you render is stored in RAM preview so that Ae doesn't have to re-render the frame each time you hit play. With more RAM, you can store more rendered frames, which lessens the chance that Ae will have to re-render frames that haven't changed.

Rounding things out, we have a pair of 500GB Samsung 980 EVO NVMe primary drives; one for the OS and applications, and a second drive for your project files and disk cache.

All told, this system should run you about $3,400 and according to our PugetBench database, should score around 1200 points in our After Effects benchmark. This makes it an excellent value for the amount of performance you will get and is in fact about 20% faster than the "Good" configuration in our last Best Workstation PC for Adobe After Effects (Summer 2020) article.

If you want to cut down the cost further, you could substitute the GPU for an RTX 3060 Ti 8GB, or one of the RTX 2000-series cards from the previous generation. However, we do recommend sticking with an NVIDIA GPU as they are typically faster per dollar than AMD Radeon cards. Another way to save a bit of money is to go down to a single storage drive – although a separate drive for your disk cache in particular is incredibly helpful in After Effects.

Configure a “Good” After Effects Workstation

For the GPU, we will be keeping the same NVIDIA GeForce RTX 3070 8GB since a higher-end GPU isn't going to give a big increase in performance in After Effects. However, if you also work with Premiere Pro, DaVinci Resolve, or especially third-party rendering engines like OctaneRender and Redshift, you may want to bump the GPU up to an RTX 3080 or even an RTX 3090. But since this post is focusing on After Effects in particular, we are instead going to put more of the budget towards significantly increasing the amount of RAM (128GB) as well as an SSD for your project files which allows you to reserve the second Samsung 980 Pro NVMe drive for your disk cache. Even with 128GB of RAM, having a dedicated drive for the disk cache can be very important.

Depending on current pricing, this configuration should cost just over $4,000 and score around 1,300 points (about 10% faster than the "Good" configuration) in our After Effects benchmark. Keep in mind that raw performance isn't the only thing you are getting with this configuration – you are also getting the much higher RAM capacity and a dedicated cache drive which can make a huge impact on your workflow. At the moment, this – or one with a slightly upgraded GPU – is one of the most common configurations we sell for After Effects.

Configure a “Better” After Effects Workstation

The "Best" PC for After Effects is a bit hard to define, since it isn't actually the fastest configuration you can get for After Effects. The "Better" configuration we previously listed (with possibly an upgrade to the Ryzen 5950X) is actually the fastest in terms of how quickly you can generate RAM previews or export. However, for very high-end motion graphics and VFX workflows, there are a number of upgrades we can make that may not be quite as fast on paper, but end up netting you improvements to your overall workflow.

More RAM allows After Effects to store more frames in RAM preview and lessens the chance that Ae will have to re-render frames that haven't changed which can greatly increase your productivity. More than the performance from the CPU itself, the ability to have this much RAM is what really sets this system apart from the "Better" configuration. Faster processing is always nice, but not having to do that processing in the first place is even better.

We will continue to stick with NVIDIA for the GPU, and again avoid upgrading above the NVIDIA GeForce RTX 3070 8GB. This card is more than enough for any native After Effects workflow, although as we stated with the "Better" configuration, if you also work with Premiere Pro, DaVinci Resolve, or especially third-party rendering engines like OctaneRender and Redshift, you may want to bump the GPU up to an RTX 3080 or even an RTX 3090.

For storage, we are going to use the same setup as the previous system, only bumping up the project drive to 2TB and the disk cache drive to a 1TB NVMe drive that is even faster than the Samsung 980 Pro we used in the previous configurations. How much storage is enough varies greatly depending on each person's workflow, so depending on how much footage and assets you need on your local system, you may consider adding even more storage. Alternatively, if you will be using network storage then including a 10 Gigabit PCI-E networking card is a good idea.

All told, this configuration should come in a bit under $6,800 and score around 1,170 points in our After Effects benchmark. That is a hair below even the "Good" configuration in terms of raw performance, but just like going from the "Good" to "Better" configurations, the increased RAM capacity is going to make a much bigger impact than the benchmark numbers suggest. Overall, this is easily one of the most robust possible configurations for After Effects you can get with the hardware currently available.

Configure a “Best” After Effects Workstation