nVidia GeForce4 - How Does it Compare?

We all know that the gaming industry is a very powerful driving force behind the advances in the speed and capabilities of computer hardware. Today's games consistently push and ask for more and more power. Without question, the focus of this force is on the video card market. When the goal is the real-time rendering of lifelike scenes, the demand on the video card is simply unbelievable. The GeForce3 cards went a long way to improving video performance, and nVidia has done it again with the GeForce4. With another impressive increase in performance, GeForce4 is taking us one step closer to truly lifelike game scenes.

Putting it in Context

A definite potential problem with the name "GeForce4" is the accompanying misconception that it is the fastest and most capable technology out there. Just as with the GeForce2, nVidia is actually releasing two product lines, the MX series and the Ti series. The MX series lacks many of the features of the Ti series, and that makes it difficult to place in terms of performance. Roughly, the performance comparison of nVidia products is:

My fear is that people will see the low price tag of the GeForce4MX cards, and immediately accept it as a great deal. Don't get me wrong, it is a great deal! As long as you realize where the GeForce4MX fits in terms of performance, it could very well be a wonderful card to meet your needs at a great price. 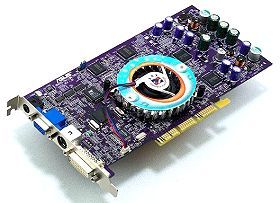 So What is New?

There is one feature that I believe is worth mentioning, because it ties back very closely to the demands of today's games. If we take a look at what it is that gives games realism, we see that shading plays a large part. Every scene in a game is constructed out of tiny triangles, and the information about these triangles is stored in the vertex data. So when you hear the term "vertex shading," its talking about the shading information assigned to each triangle. This requires a large amount of computations, and as games attempt to be more and more realistic, the demand is only going to go up. nVidia recognizes this. The GeForce3 cards have a vertex shader, but the GeForce4 Ti comes with two vertex shaders. These shaders work in parallel, effectively doubling the computational power for that effect. This parallel nature, teamed with the more efficient implementation, end up giving the GeForce4 Ti4600 the ability to process about 3 times as many vertices as GeForce3 Ti500 per cycle. That is impressive! This gives games some decent growing room, which they will undoubtedly fill very quickly.

The biggest difference between the MX and Ti lines is that the MX lines lack this parallel vertex shader. While that does significantly hinder its ability to provide the computational power on par with the Ti line, that doesn't mean that it does not have value. The GeForce4 MX, with its increased timings and more efficient design, represents a large improvement over the last MX cards we saw (GeForce2 MX). In addition to those improvements, the GeForce4 MX also retains the programmable T&L engine, making it much more easily utilized by game programmers.

One last item to mention about the GeForce4 is the new appearance of some features long desired by the market. TV-out and dual display capabilities are found on nearly all GeForce4 cards, which will go a long way to helping nVidia compete against ATI. As I said in the GeForce3 vs. Radeon 8500 article, ATI's main strength lies in its features. Now, it will be a while before we see a nVidia card with a cable TV tuner, but at least we're seeing progress!

The sheer speed increase found in the GeForce4 is the most impressive aspect of this release. The GeForce4 Ti4600 appears to be capable of outperforming the GeForce3 Ti500 by 20-50% ! Very impressive.

Frankly, I've been eagerly awaiting for the complete GeForce4 line to appear in the mass market. At the moment, most vendors that carry them is out of stock. We aren't! It will probably be a few weeks or even a month before they are commonly available, but Puget Custom Computers has a complete supply of MX cards and limited supply of Ti cards right now! Just hours ago, we updated our website to offer these products as well as a handful of other cutting edge components. To see all the new things Puget Custom Computers has to offer, give our configuration page a look at https://www.pugetsystems.com/configure.php!