Skip to content
Always look at the date when you read an article. Some of the content in this article is most likely out of date, as it was written on October 27, 2015. For newer information, see our more recent articles.

While M.2 drives are nothing new to the PC community, many manufacturers like Samsung have been holding off on developing drives for the retail market until more devices (motherboards, laptops, tablets, etc.) were able to utilize them. We have finally reached the point where a large enough portion of new motherboards and laptops include M.2 slots that Samsung is ready to release their first retail M.2 drive: the Samsung 950 Pro.

Samsung has released a number of M.2 drives in the past including the XP941 and the SM951. However, those drives were technically OEM only drives which made it difficult for end users or independent PC manufacturing companies like Puget Systems to purchase. 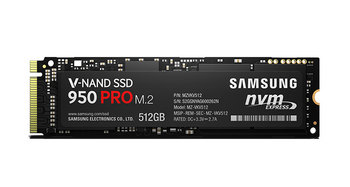 The question is: how does the new retail Samsung 950 Pro compare to its predecessor – the OEM Samsung SM951? The SM951 has incredible performance (advertised at 2150MB/s read and 1550MB/s write), but we found in our recent review that it would reach temperatures as high as 110C. In this article we will look at the Samsung 950 Pro 512GB to see how it compares to the SM951 512GB in terms of both performance and temperature.

Physically, the 950 Pro is identical to the SM951. It uses the same M.2 M-key connector, is exactly the same size (22mm x 80mm) and requires a PCI-E 3.0 x4 M.2 slot in order to run at full speed. In fact, the biggest physical difference is one that is not listed in the specs: the 950 Pro only has chips on the top side of the PCB whereas the SM951 has chips on both sides. This is due to the fact that the 950 Pro uses the new V-NAND technology which allows the storage memory to be stacked to up to 48 layers resulting in a much denser storage medium. In addition to decreasing the amount of footprint you need for the storage chips, V-NAND is also supposed to be twice as fast as NAND, use only 45% the amount of power, and has greatly improved endurance.

Because of the move to V-NAND, the 950 Pro should have a higher maximum sequential read performance than the SM951 by about 250 MB/s. However, the rest of the advertised performance specs are fairly comparable. One of the more interesting specs for us is actually the endurance rating of the 950 Pro. Where the SM951 was only rated for 150 TBW, the 950 Pro is rated for 400 TBW which is a much bigger jump than we would have expected. This still isn't anywhere near the endurance of a server-grade drive like the Intel DC P3700 series which has an endurance of 7,300 TBW – but it is one of the highest endurance rating we have seen for a consumer drive.

The 950 Pro is currently priced much lower than the SM951 (about $0.68 per GB versus $0.91) and is also cheaper than the Intel 750 400GB even though it is 112GB larger. However, as we will show later in this article this drive can run fairly hot so if you want full performance over heavy sustained load you will likely want to use a PCI-E adapter with heatsink. If you use one of those adapters, the effective cost of this drive to be closer to $0.78 per GB. Even with an adapter, however, the Samsung 950 Pro is only about twice the cost of a standard SATA SSD. And considering the fact that you would need to RAID four or more SATA SSDs in order to get the same performance of the 950 Pro the price is actually extremely attractive if you need a high performance drive.

The last thing we wanted to mention is that while the 950 Pro should work as a secondary storage drive on almost any motherboard, you will need a motherboard with a newer chipsets (like Z170, Z97, X99, C602, etc.) if you want to install an OS onto it. Even then, you will need to install in UEFI mode as BIOS mode is not supported.

We are not going to go into too much of a detailed performance analysis because, frankly, that work has already been done for us by a number of great review sites. Tech Report, AnandTech, and Toms Hardware and many others have done extremely through performance analysis of this drive.

However, just in case something odd comes up we did run our standard harddrive benchmark – CrystalDiskMark 5.0.2. This benchmark was actually just recently updated to improve the accuracy of the results when benchmarking NVMe drives so it is even more accurate for these ultra fast drives than it was in the past. 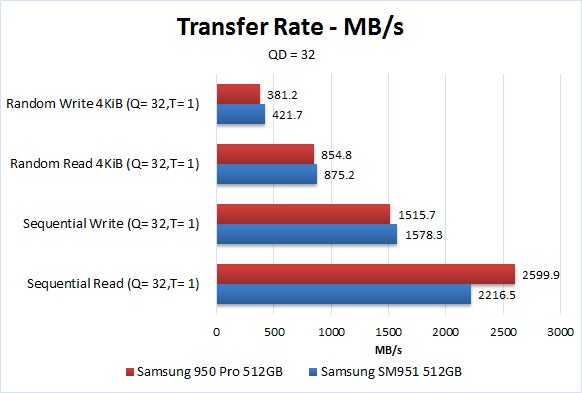 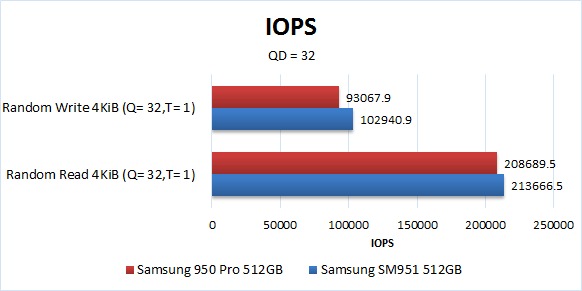 In terms of IOPS, we saw a bit lower read and write IOPS than the drive is advertised to be able to achieve. This isn't all that unusual as IOPS tend to vary based on the application that is running so Samsung is likely simply using a different program to determine their advertised IOPS.

Overall, the Samsung 950 Pro is a very balanced drive. While the IOPS and sequential write performance may be pretty close to the SM951, the sequential read performance of over 2.5GB/s gives it a nice performance bump.

When we reviewed both the Samsung SM951 and the older XP941, we found that both of those drives ran extremely hot. The XP941 hit temperatures as high as 118 ºC while the SM951 hit 113ºC. Given that V-NAND is supposed to need only 45% the amount of power as the older technologies, we really hoped that the Samsung 950 Pro would have greatly improved temperatures. In some ways we were right, but it appears that Samsung took a different approach to lowering the temperature than we hoped. 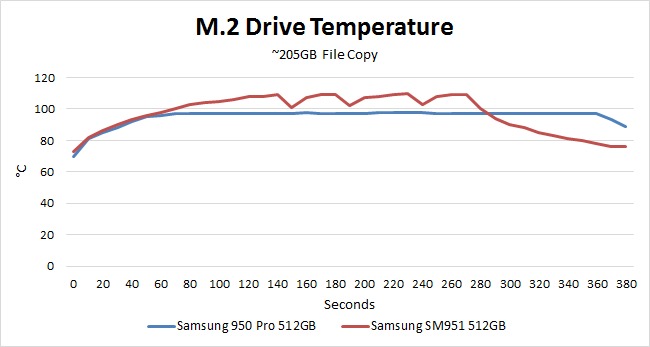 To see how hot this drive gets, we did a simply file copy of ~205 GB worth of ISO files. As you can see, the 950 Pro does run cooler than the SM951 by about 5-12 ºC, but it still reached a peak temperature of 98 ºC on the controller chip (the storage RAM itself does not get anywhere near as hot). This isn't doing hours of benchmarking in a closed box either – just a simple file copy on an open test bench. Doing this, the 950 Pro hit 97 ºC after only about a minute and 98 ºC after about 3 minutes compared to the SM951 which hit 100 ºC after about a minute and 110 ºC after only about three minutes.

What is really interesting is that until the 950 Pro hit 97 ºC, both it and the SM951 had nearly identical temperatures. In addition, during this period Windows reported identical file transfer speed of about 700-800 MB/s for both drives. After the 950 Pro hit 97C, however, the transfer speed on the 950 Pro dropped to around 400-500 MB/s which it maintained for the duration of the file copy. The SM951, on the other hand, sustained the 700-800 MB/s transfer speed except for around the 150, 190, and 230 second mark where you can see a slight dip in temperature. At each of those points the controller on the SM951 hit 111 ºC for a split second and the paused the file transfer until the temperature dropped to below 100 ºC.

Due to the fact that the Samsung 950 Pro throttles sooner than the SM951, we actually saw much lower sustained performance on the 950 Pro than we expected. To copy all 205GB worth of ISOs, the 950 Pro took about 365 seconds while the SM951 only took about 274 seconds. This translates to a sustained file copy performance of about 562 MB/s for the 950 Pro and about 748 MB/s for the SM951. In other words, while the Samsung 950 Pro does have lower temperatures than the SM951, it achieves this by being much more aggressive in it's throttling.

The 950 PRO also features Dynamic Thermal Throttling Protection technology, which controls the temperature of the device to reduce overheating and maintain a high level of sustained performance.

Samsung's overview page for the 950 Pro makes it clear that this drive is designed to throttle when the drive gets hot so the high temperature on the controller shouldn't impact the longevity of the drive. However, even if you are willing to trust that Samsung has addressed the high temperatures appropriately, you still will see a drop in performance if this drive gets too hot. And since that happens after only about a minute of sustained file transfer, it is likely that most users will run into this throttling at some point.

If you want a high performance drive that is able to achieve the advertised performance over prolonged periods of time, we would highly recommend using this drive in combination with a PCI-E adapter that includes a heatsink (we use this adapter ourselves) or otherwise affix a heatsink to the controller chip to help dissapate the heat.

If you prefer a video over a chart, we also recorded a video showing exactly how hot both the 950 Pro and SM951 run when doing a 205GB file copy:

Overall, we feel that the Samsung 950 Pro is a terrific drive. You will likely need a fairly new platform in order to use it – and will need to use UEFI mode if you wish to install an OS onto it – but the performance it is capable of is amazing. 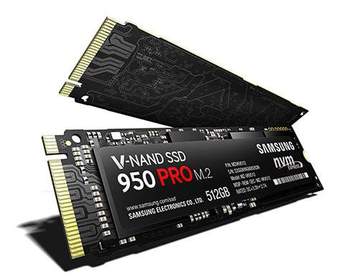 Even considering the areas where the Samsung 950 Pro isn't quite as impressive, the current price points of only about $350 for the 512GB version and $200 for the 256GB version are extremely attractive. Yes, that is about twice the price of the SATA-based 850 Pro drives from Samsung, but in exchange you get up to 4x the read performance and 3x the write performance!

The biggest issue we have with the 950 Pro is one that seems to come up often with high performance NVME drives – temperature. The 950 Pro does run cooler than older NVME drives, but the controller still easily hits 98 °C at which point the drive throttles (down to as little as ~ /3 of peak performance!). We were hoping that the move to V-NAND would improve the controller temperature, but it appears that this is not the case. All this really means is that if you want to be able to maintain the full speed this drive is possible of at all times you will need to use a M.2 to PCI-E adapter with a heatsink. On the other hand, Samsung publicly advertises the throttling capability of this drive so if you are willing to see some performance throttling it should be completely safe to use it without a heatsink if you wish.