In the past I was pretty impressed with performance but was wishing that there was a more optimal BLAS library for the Zen2 architecture. There is now a version 2.0 of the AMD "BLIS" library and it gives significantly better performance with Linpack than v1.3 that was used in older posts.

This post revisits the recent Ryzen posts and adds in new results for the Threadripper 3970x I'm including NAMD Molecular Dynamics results for my usual test molecule, STMV as well as a smaller molecular system, ApoA1. ApoA1 seems to be a popular system for benchmarking on CPU with NAMD. GPU acceleration results are reported for the ApoA1 job results. 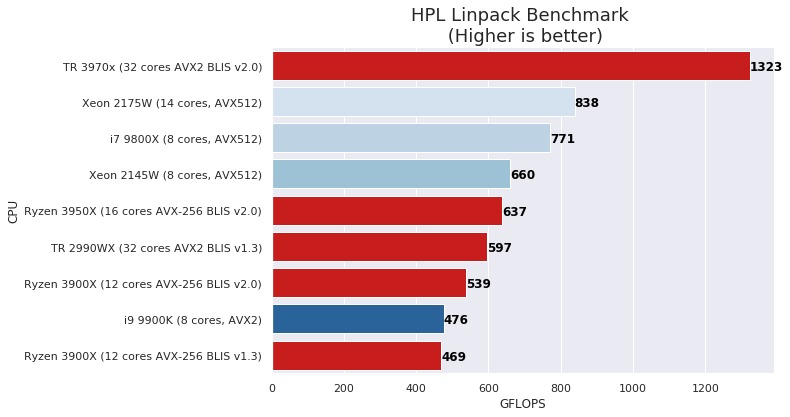 The TR3970x results are exceptionally good for a processors with AVX2!

Now on to the real world! … sort of … NAMD is one of my favorite programs to use for benchmarking because it has great parallel scaling across cores (and cluster nodes). It does not significantly benefit from linking with the Intel MKL library and it runs on a wide variety of hardware and OS platforms. It's also a very important Molecular Dynamics research program.

When I said "sort of" above I'm referring to the fact that NAMD also has very good GPU acceleration. Adding CUDA capable GPU's will increase throughput by an order of magnitude. However, with NAMD and other codes like it, only a portion of the heavy compute can be offloaded to GPU. A good CPU is necessary to achieved balanced performance. I like NAMD as a CPU benchmark because I believe it is an excellent representative of scientific applications and reflects performance characteristic of many other programs in this domain.

This plot shows the performance of a molecular dynamics simulation on the million atom "stmv" ( satellite tobacco mosaic virus ). These job runs are with CPU only. Performance is in "day/ns" (days to compute a nano second of simulation time) This the standard output for NAMD. If you prefer ns/day then just take the reciprocal. 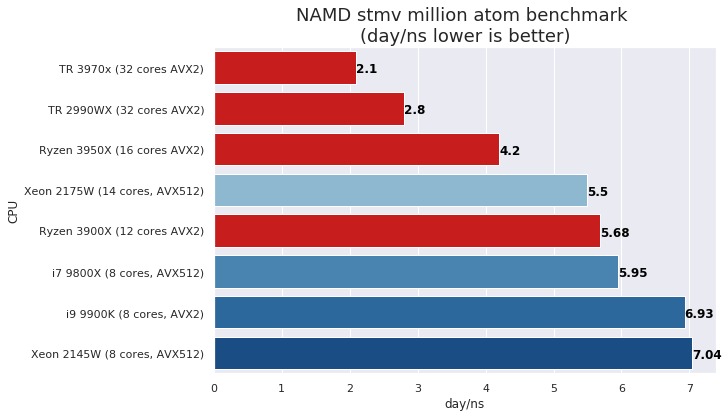 This last set of results is using the smaller ApoA1 problem (it's still pretty big with 92000 atoms!)

I ran this job for two reasons; 1) to show how well the TR3970x does compared to the Xeon-W 2175 14-core AND to provide a reality check about how much adding a GPU can increase performance for programs that have good GPU acceleration. Adding the NVIDIA 2080Ti GPU's increased performance by over a factor of ten!

The 32-core TR3970x is very good with this Molecular Dynamics code! The upcoming 64-core version should scale perfectly and provide the needed CPU performance to keep up with the code running on multiple NVIDIA 2080Ti's. My guess is that the upcoming TR3990x 64-core CPU together with 2-4 NVIDIA 2080Ti's will "set the bar" for performance as a workstation platform for this class of applications. I'm looking forward to testing that!

At this point I really don't have any serious reservation in recommending any of the new AMD Zen 2 core based processors for compute intensive workloads. They give excellent performance and value. This is not to say that I have reservations recommending the new Intel Core-X or Xeon-W processors in this price class. The Intel processors come with a solid mature platform and also offer excellent performance (and now, with the new price cuts, good value). Intel also has the advantage of a very strong development ecosystem. You can get great performance with the new AMD processors but but to achieve that performance there may be times when you have to do a little extra work recompiling code or things like that.

I will be doing more CPU testing in a few week after all of this years new processors from Intel and AMD are released. So, expect another post with LOTS of new CPU's in it!