Q: What hardware is needed for smooth streaming?

A: That answer depends on both how you approach streaming and what sort of content you are broadcasting. The computer needs to be able to handle whatever you plan to stream first - whether it is a video game, desktop application, web conferencing software, etc - and then on top of that will have additional system requirements that vary with different streaming applications. We have a more info about some of these options further down this page, discussing the pros and cons to each, as well as another tab that covers gaming hardware requirements (for those who want to live stream their gameplay). Generally speaking, though, a fairly powerful CPU or a video card with NVENC support is the key piece to handle encoding the video stream. You also need an internet connection with good upload bandwidth in order to ensure the data gets out to your viewers smoothly.

Q: Should I have a separate computer dedicated to streaming?

A: If you want to stream content exclusively from other devices, like game consoles, then a standalone computer is probably the best way to go. If you want to stream content directly from a computer, though, you can configure it in such a way as to be able to handle both your computer usage and streaming at the same time. That may make the computer more expensive, but it can be easier to manage than having a separate computer alongside your main system just for streaming. If the activity which you are streaming is extremely CPU intensive, then the pendulum may swing back in favor of a dedicated streaming box. Additionally, if you stream from a combination of multiple sources at the same time then the system may need to be physically larger in order to have multiple capture devices to facilitate that.

A: Overclocking is not really necessary, especially with the Turbo Boost feature that is built into many modern Intel processors. That already provides a clock speed increase under heavy load, based on how many cores are active - effectively an automatic, built-in overclocking ability. If you want to take things further, the CPUs and motherboards used in our Basic Streaming and Streaming & Editing systems support overclocking... although we don't overclock here at the factory, nor do we recommend doing so on your own. Overclocking will increase heat output and power consumption, and in the long run will put more stress on hardware than running at stock speeds.

A: We strongly recommend using solid-state drives on all computers these days. They have a huge impact on every aspect of computer usage, from faster boot times to more responsive operation. If you want to also record your stream, for editing later on or whatnot, then traditional hard drives are fine as secondary drives for storing media. 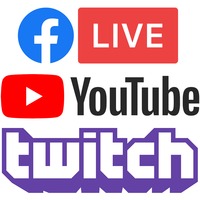