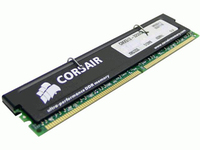 Memory is like a blank piece of paper that your computer keeps notes in. Memory is accessed faster than your hard drive, so when your computer is running programs it copies information to your Memory, where it can quickly edit and access it. Memory only temporarily stores this information, and is constantly loading and unloading new information. The memory cannot permanently store information, which is why you lose unsaved information if your computer crashes or you lose power.

Memory has 2 important features to keep in mind: Size and Speed.

The size of memory you have, is usually expressed in Megabytes or Gigabytes, depending on how much you have. (1024 megabytes is 1 gigabyte). A few years back, 64 megabytes was a tremendous amount of memory for your computer to have. Today, I would sell a system with no less than 512 megabytes, and usually recommend 1 or 2 gigabytes of memory, depending on the customers' performance demands.

The primary measure of your memory speed is the frequency, measured in Hertz, and is sometimes expressed as 400mhz, 667mhz, 800mhz, etc. It's important that your memory speed synch up with your processor speed.


RAM also has an attribute called "Latency", which is best described by with another cliché car anology. As the term suggests, the latency is how long it takes the RAM to 'get going', much like the 0-to-60 measurements in car acceleration. The smaller the latency, the faster your RAM gets up to speed.

There's also a common feature found on memory called "Dual Channel". To simply sum this up, it means that RAM runs faster in pairs than it does as a single stick. So in theory, 2x 512mb sticks will give you more performance than a single 1024mb stick. Matching your RAM and CPU speed often involves significant amounts of math, and would best be left for a different article. In most cases, you can hope that the computer builder has done his research and matched the memory and processor together to maximize your performance.

It's fair to say that more RAM is usually a good thing. You want to make sure you have enough for current and future demands, but not go overboard and spend money that you don't need to. A typical home user will find 1gb to be plenty of RAM, while a video gamer might need 2gb, and some professional applications even demand 4gb or more!

When choosing your RAM, first come up with a ballpark amount that you'd like. Next, you need to know which type of RAM your CPU and Motherboard require. This might be DDR, SD-RAM, SODIMM, REG ECC, or number of other things that involves a lot of capital letters. Next, every processor should have a list of RAM speeds that it synchronize with. For example, a processor with a FSB (front-side bus) speed of 800 will synch nicely with 400mhz speed RAM. The person who is assembling your system should be able to help you with this.

Finally, you usually have a choice between a low-end and high-end series of RAM. The high-end line will have special timings designed for the fastest memory operation, but will be adjoined with an appropriate price hike. The lower-end series provides the best bang-for-your-buck memory performance. In my experiance, lower-end RAM often has a higher chance of failing than the premium series RAM does.

To start with the question of High-end RAM timings: If you're maxing out your system with the highest end choices of processor, motherboard, etc, then the high-end RAM is for you. If you're shopping with budget in mind, I recommend the value series of RAM. The extra money can be better spent elsewhere in the system.

The beauty of RAM is that it's so easily upgraded. Most often, you don't even have to replace old RAM - you just add more to it! This is a key to keep in mind when building your system. If you're on a budget, go with two 512mb sticks of RAM now, and upgrade later on when you can. If you're building a performance or gaming system, choose two 1024mb sticks. In the end, if it's not enough RAM, you can just add more.

If your usage is pretty basic, limited to things such as Internet, email, office applications, music and movies, then 2 x 512mb of RAM is a great place to start. However, if you do some pretty intense work: CAD / CAM, video editing, Photoshop or gaming, then you'll want to start with at least 2x 1024mb.