Read this article at https://www.pugetsystems.com/guides/1381

While After Effects is utilizing the GPU more and more with every update, in most situations it is the speed of your CPU that really determines how fast Ae runs. This means that even though AMD's Radeon VII is an extremely robust card with twice the VRAM as a comparably priced NVIDIA GeForce card, for most Ae users it is unlikely to give any tangible performance benefits.

However, we will readily admit that we are not perfect and that our predictions are not always correct. Because of this, the only way to know for sure how the Radeon VII will fare in After Effects is to simply put it through our benchmark process and find out. 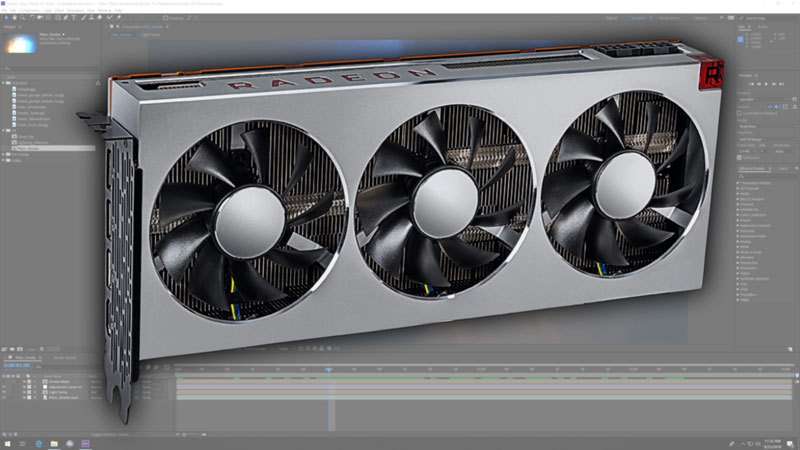 In this article, we are going to take a look at how the AMD Radeon VII stacks up against the AMD RX Vega 64 as well as the entire NVIDIA GeForce RTX lineup - plus the Titan RTX. We also have (or will soon have) a number of articles available looking at the performance of the Radeon VII in a range of other applications that you can view by filtering our recent articles to just those about Video Cards.

Listed below is the system we will be using in our After Effects CC 2019 testing:

While our benchmark presents various scores based on the performance of each type of task, we also wanted to provide the individual results in case there is a specific test someone may be interested in. Feel free to skip to the next section for our analysis of these results. 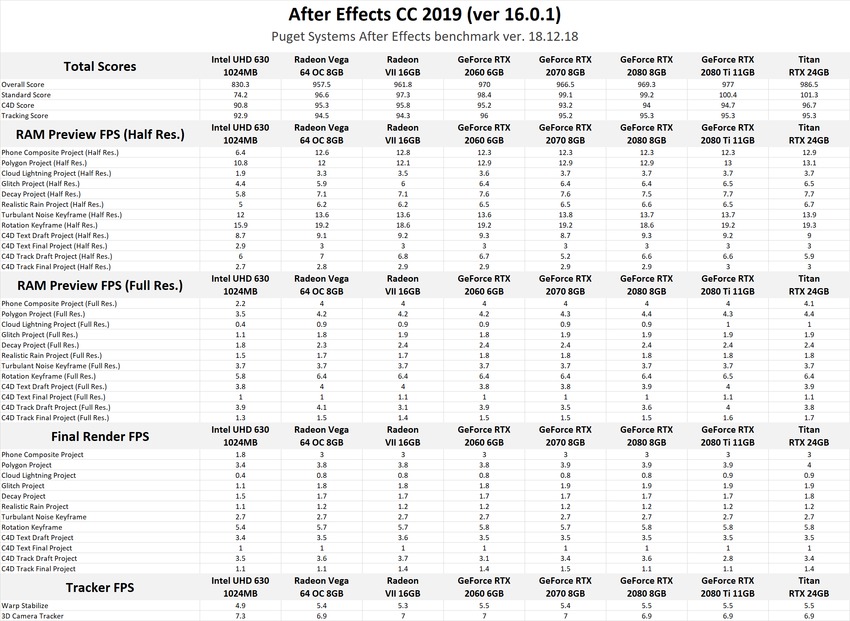 Unfortunately, since After Effects is largely limited by the performance of your CPU, there really isn't much to talk about. With our current benchmarking process, all the GPUs we tested were within a few percent of each other and they were all only about 20% faster than onboard video.

We plan on expanding our Ae benchmark to target the GPU more in the future, but we feel very strongly that our benchmark should represent the kind of things people do every day. It likely wouldn't be too difficult to show a greater difference between each GPU by loading up on only the effects that are GPU accelerated, but at that point it would become more of a synthetic benchmark than a real-world one. Our benchmarking priority is first and foremost to determine the real world performance of various hardware components, so we are very hesitant to start down that path.

Is the AMD Radeon VII 16GB good for After Effects?

With our current After Effects CC 2019 benchmark, we found almost no difference between any of the GPUs we tested. That means that while the AMD Radeon VII 16GB is a perfectly fine card for Ae, it really won't give you a performance boost over a Vega 64, RTX 2060, or almost any other modern GPU. The 16GB of VRAM is a nice feature, but it is also way more than After Effects needs since even 6-8GB of VRAM is going to be more than enough for the vast majority of users.

We realize that this is a very unexciting post since all the GPUs we tested were within a few percent of each other. However, half of the reason we do this testing is to make sure there are no weird performance abnormalities. The results sometimes take us by surprise, and often help us track down a driver/software issue before it becomes a problem for our customers. Our recent DaVinci Resolve testing is a good case in point as we discovered that Resolve is underperforming when using newer NVIDIA GPU drivers.

Of course, very few workflows involve just one piece of software. Because of this, we highly recommend checking out our recent Video Card articles where we look at - or will be looking at - the performance of the Radeon VII in Premiere Pro, Photoshop, DaVinci Resolve, as well as a number of other applications. Just because After Effects doesn't benefit from the Radeon VII, that doesn't mean that other applications you use every day won't either.

Hope Adobe Premier next, some say that truly shows VII potential.
Thanks again.

That is actually going to be a little bit. We are updating our Premiere Pro benchmark right now and opted to wait until that is done before doing any Premiere Pro articles. Otherwise, we would do all the testing, then have to turn around and do it all again.

If I had to guess, I think early April is probably when we will have an article up looking at the Radeon VII in Premiere Pro.

Great- thanks, lets hope the Pro drivers will be available by then too.

Thank you for this. Maybe the 16gb of memory will be more helpful with Red Giant effects.

Is always so sad to see all these benchs and get that software is so bad optimized to get all the plenty potential of each platform, the next revolution must come from software side, asap.

Has it been established yet, whether or not the Radeon VII is a true 10-bit GPU, or not? I have read where the option to select is available in the AMD settings, but some have questioned the card being 8 or 10-bit.

It can't display 10-bit through OpenGL applications like Premiere and Photoshop -we have confirmed that directly with AMD multiple times. After Effects actually can't do 10-bit with any GPU (not even Quadro or Radeon Pro), you need to use a video monitor card like the Blackmagic Decklink series. That is directly from the AE developers, we confirmed that during the last Adobe MAX.

After Effects still has a lot legacy code from the early 90s embedded since it's CoSA days. Any optimization of code is only done on the surface layer and not the core, that's why it can't even do real-time feedback during playback while changing parameters like what Apple Motion is capable of. In the heart of AE, CPU speed is still the main deciding factor. Many years back there was a plugin that speeds up rendering by using up all processor threads and Adobe bought that company, incorporate that into AE but has since remove it for some reason.

"Render Multiple Frames Simultaneously" is the feature you are referring to and it was removed in AE CC 2015 (when they started adding GPU acceleration). My understanding is that it didn't play well with the GPU-accelerated effects and that it was actually very problematic even before then. The developers had to choose between trying to get that feature to be more stable or to concentrate on GPU acceleration. In my opinion, I think they made the right choice by focusing on GPU acceleration since in the long term, it should result in much better performance overall.

That said, I know they are working on improving multi-core support. For example, in the 2018 release there was a note in the new feature summary of "The Add Grain, Match Grain, and Remove Grain effects now perform faster on multi-core CPU systems." Hopefully this trend continues and they are able to continue adding GPU-acceleration while also improving the tasks/effects that are better to run on the CPU.

The biggest problem with AE is that all the frames has fed into ram as uncompressed frames, hence the infamous high ram usage. By leveraging everything onto the GPU, the card will need loads of ram for the video frames to reside in order to be processed. No sure if AE supports multi-GPU rendering but if it does then it is the first step in the right direction.
Adobe really needs to redesign Adobe Media Encoder as a front-end rendering manager to manage multiple AME render-clients and intelligently distribute Premiere Pro and AE projects to them for final rendering.