Cinema 4D, from Maxon, is widely used for creating advanced 3D graphics. When rendering those graphics, the performance of the central processor (CPU) in a computer is of paramount importance. CPU-based rendering generally scales well with both clock speed and core count, but those specifications cannot be directly compared across different brand or generations of processor. Here at Puget Systems we do real-world testing to ensure we provide our customers with the right computer for their needs.

In this article we are going to look at the latest CPU options from Intel and AMD, both of which have recently released high core count processors that should be great for Cinema 4D. From Intel we have the Core X series of processors, which were code-named Skylake X. They come in 6- to 12-core models currently, though up to 18-core variants will be coming in the future. Up against these chips are AMD's new Threadripper processors, based on a pair of Zen chips combined into a single package. We'll be looking at the 12- and 16-core models in that family to see how they stack up against Intel's traditional lead in this application.

We are also including several other CPU platforms in this article, as points of comparison. We've got Intel's lower core count Kaby Lake chips, along with AMD's similar Ryzen line. Intel's Xeon versions of the Skylake X are also present, called Skylake W or Xeon W depending on where you look. And to top things off, a dual Xeon configuration is included as well - to show what can happen if you put two powerful processors together.

To see how these different CPUs perform in Cinema 4D, we ran Cinebench R15 on the following configurations:

These test configurations include a wide range of Intel and AMD processors. CPU-based rendering in Cinema 4D is known to scale well across multiple cores, so the lower core count processors are mostly here for reference. Such 4, 6, and even 8 core chips are common on home and gaming computers, as well as office workstations, but they don't really hold up well under heavily threaded applications like rendering. Ideal performance for rendering will be found with 10+ cores, and a while the focus of this particular article is on single-CPU performance we included a dual Xeon processor setup as an example of how well such a system does with heavily threaded workloads.

The results presented below are from Cinebench R15, which is a free benchmark released by Maxon. It is designed to test CPU and GPU performance within Cinema 4D without requiring a full installation of that software. Since the focus of this article is on CPU performance we only ran the CPU portion of Cinebench, which gives two results. The first is single-core performance, which is a good indicator of how well a processor will do with 3D modeling and other applications that are not heavily threaded. The second result is multi-core performance, and while both results are presented below it is this latter one which shows rendering speed.

Here are the single-core results for the various CPUs we tested in Cinebench R15: 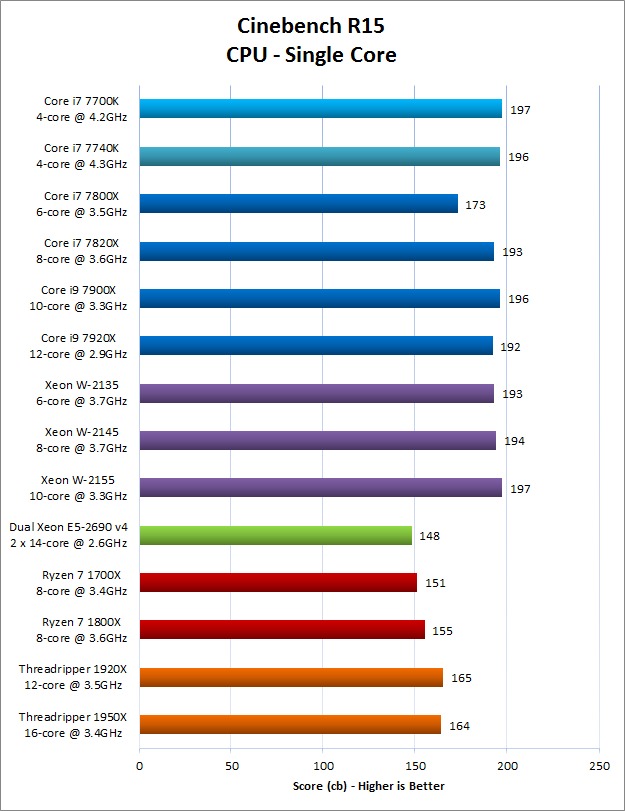 In order to measure single-core perormance, Cinebench renders an image using only one thread. This is a completely artificial limit, something you would never do in normal usage, but it does provide some insight into how different CPUs perform when faced with single-threaded applications. Most 3D modeling programs only use one thread, for example, so if you spend time doing that type of work in addition to rendering then these results may be worth considering.

One thing that is clearly visible here is Intel's lead in single-threaded performance. Almost all of the Intel processors tested here include high Turbo Boost speeds, which cause the clock speed to jump dramatically when only one (or sometimes two) cores are running. This means that even with high core count processor from Intel you don't have to sacrifice single-threaded performance. By contrast, AMD's processors and the dual Xeon configuration all lag behind by 15-25% when only one core is active.

And here are the multi-core results from Cinebench, the real meat and potatoes of this article: 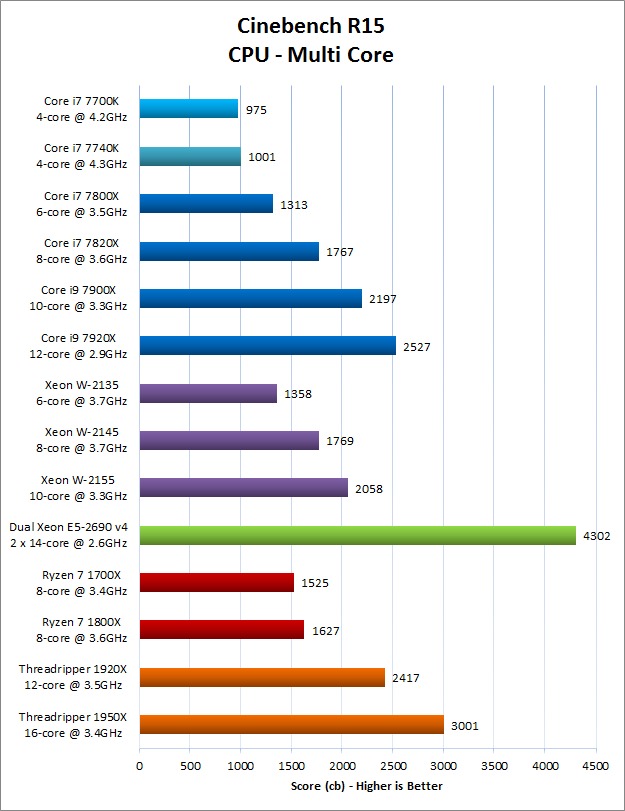 This second test is where we really want to focus, and the different processors really spread out so you can see the impact of their added cores. The dual Xeon, with a total of 28 cores, definitely wins out - but that is a much more expensive system and is really just included here as a point of reference. Among the single CPU workstations, AMD's 16-core 1950X is the fastest by a healthy margin. Next up is Intel's 12-core i9 7920X, which beats out AMD's 12-core variant in performance... but costs even more than the 16-core model. The rest of the processors fall out below those in accordance with the number of cores they have.

Here is a summary of Cinebench multi-core performance between just the top two Skylake X and Threadripper processors: 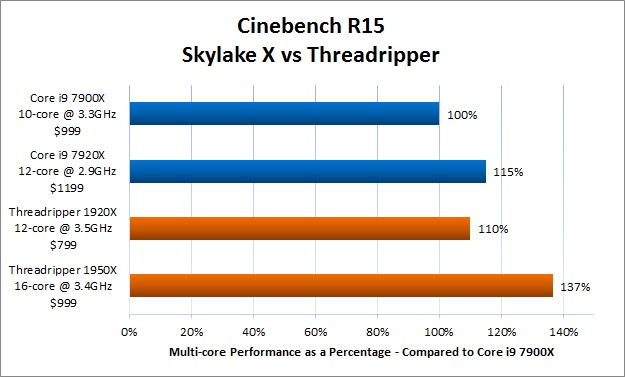 Based on these test results, and as of the writing of this article, Threadripper is clearly in the lead for CPU based rendering in Cinema 4D. The 16-core 1950X not only beats the 12-core i9 7920X, it also costs less. Looking to the near future, Intel's 14-18 core processors are likely to take back the performance lead - but will still cost more than AMD's offerings. We will test those when they become available and publish additional results at that time. We will also use this data to craft our Cinema 4D rendering recommendations going forward.

For users who don't do a lot of rendering, we also offer a 4-core system focused on design and animation performance. Those aspects of Cinema 4D are more single-threaded in nature, and as shown in the single core results you don't need an expensive processor to get good performance there. Whatever your specific workload is, all of our recommended systems for Cinema 4D can be found below.