DaVinci Resolve may be known for its ability to utilize the power of your GPU, but for basic grades or creating optimized media, your CPU is the key component that will determine how fast Davinci Resolve will be able to run. At the same time, even for GPU-focused tasks, you need a CPU that is powerful enough to not be a bottleneck as you get into triple or quad GPU configurations.

Today, we are primarily going to look at AMD's new Threadripper 3990X 64 Core in the context of pure CPU performance in DaVinci Resolve Studio. We will of course include a decently powerful GPU (the NVIDIA RTX 2080 Ti), but examining how this CPU helps with multi-GPU configuration is a much more complex topic that we are going to tackle at a later date. 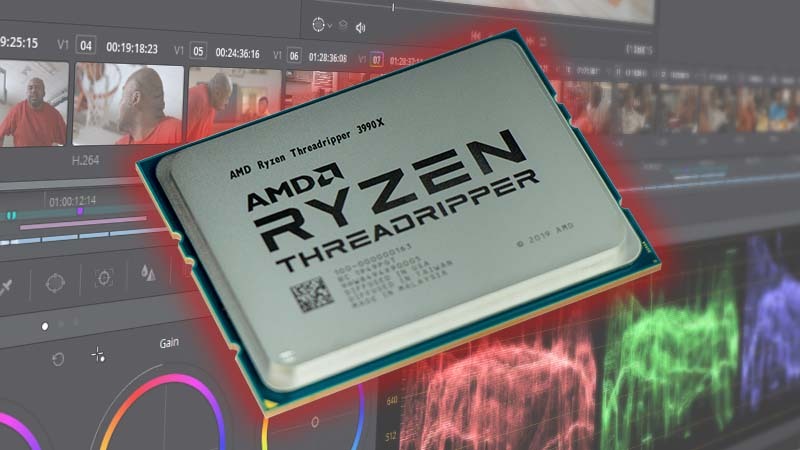 In this article, we will be examining the performance of the AMD Threadripper 3990X 64 Core CPU in DaVinci Resolve Studio as compared to the latest AMD Threadripper, AMD Ryzen, Intel X-series, and Intel 9th Gen processors. If you are interested in how this CPU performs in other applications, we also have several other articles for Photoshop, Lightroom Classic, After Effects, DaVinci Resolve, and more available on our article listing page.

Feel free to skip to the next sections for our analysis of these results to get a wider view of how each CPU performs in DaVinci Resolve Studio. 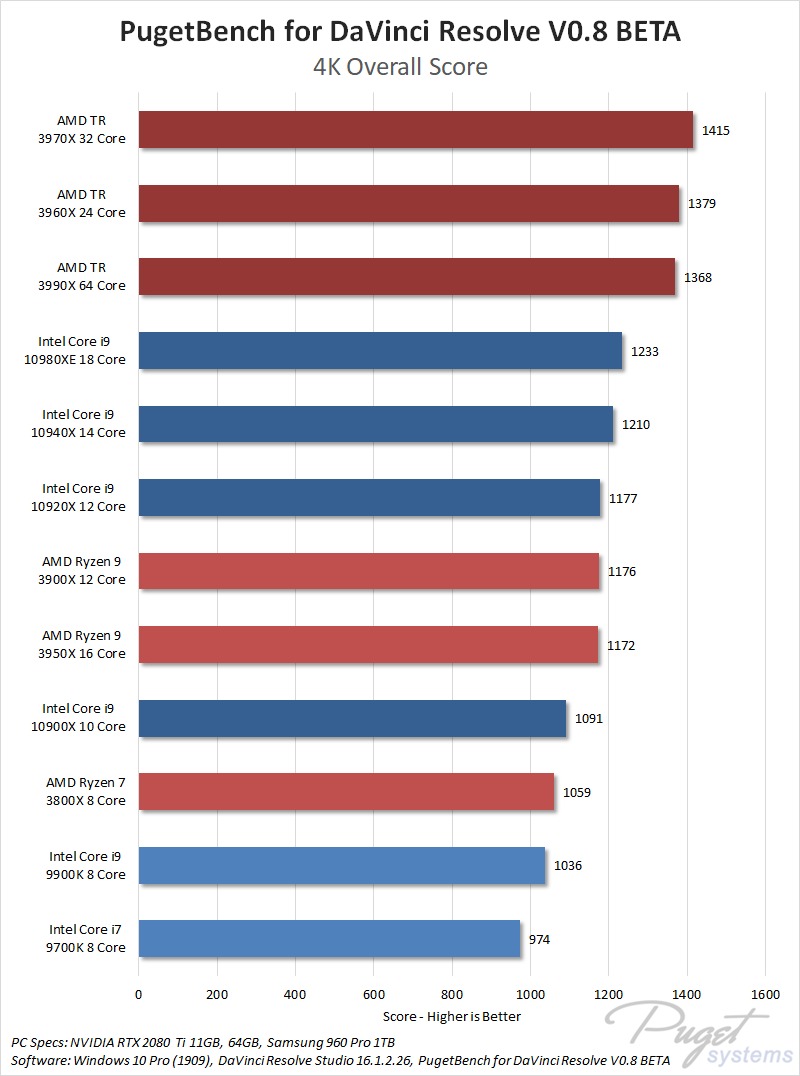 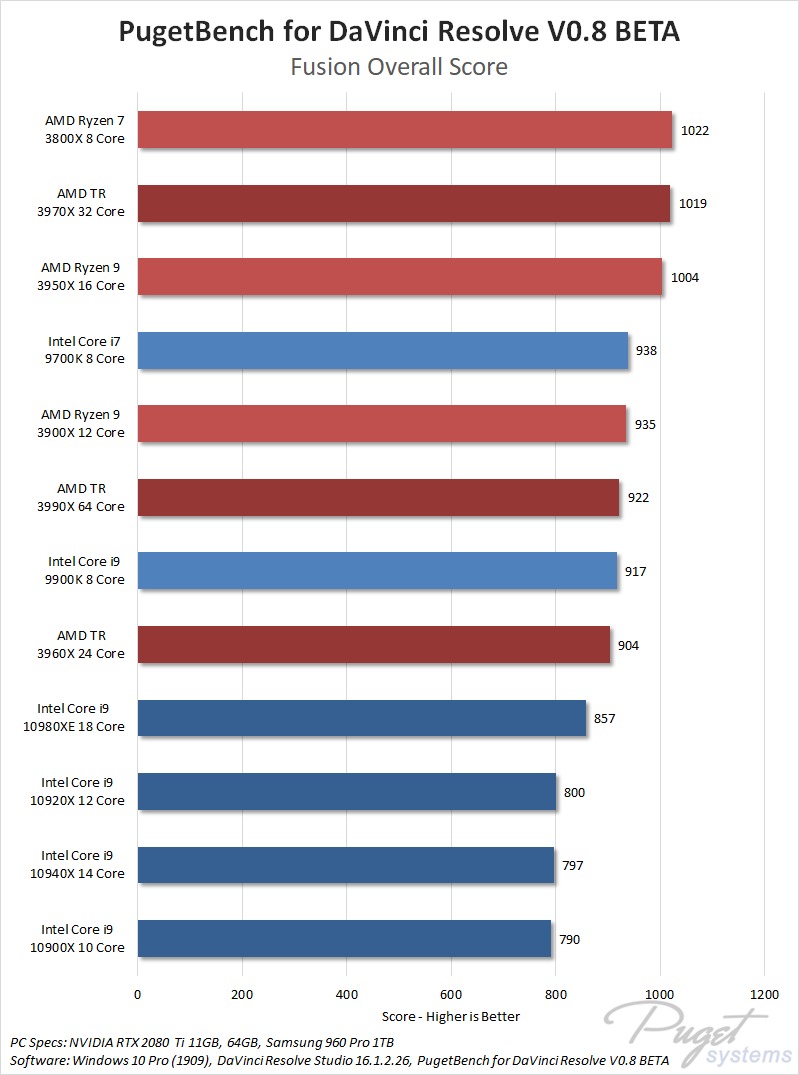 Since we are using an NVIDIA RTX 2080 Ti 11GB GPU, we are limiting our testing to our 4K media and Fusion benchmark sets. 8K is something we will look at when we test higher end and multi-GPU configurations, but since Resolve requires ~20GB of VRAM to process 8K media, that is not a test we can include with this configuration.

Overall, for 4K media all three of the AMD Threadripper CPUs perform about on par with each other. The difference is only a tiny 3%, which is well within the margin of error for this kind of real-world test. Even if we dig into the individual tests or codecs, the performance delta between these CPUs doesn't change much. At most, it increases to just about 5%, but even that is such a small difference that it is unlikely to be noticeable in your day-to-day work.

AMD's Threadripper CPUs do still beat Intel's X-series CPUs by 10-30% depending on the individual model, but keep in mind that with the pricing adjustment Intel made when these processors launched, the X-series CPUs are now less expensive than Threadripper. This is actually very nice, because it means that up until about the ~$1,300 mark with the Threadripper 3960X, you have a nice spread of models to choose from based on both your budget and desired performance.

If your work includes a decent amount of time in the Fusion tab, the Threadripper 3990X is fairly middle of the road. In terms of pure performance, it is on the same level as the Intel Core i9 9900K or AMD Ryzen 9 3900X – both of which are about 1/8th the cost of the Threadripper 3990X. For those that need 256GB of system RAM, the Threadripper line does out-perform Intel's X-series processors in Fusion, but the 3970X 32 Core is really the only Threadripper model that makes sense for heavy Fusion users.

Is the AMD Threadripper 3990X good for DaVinci Resolve?

Overall, AMD's new Threadripper 3990X 64 Core processor is not a great choice for DaVinci Resolve. The performance is not bad by any stretch, but both the Threadripper 3960X 24 Core and 3970X 32 Core are as fast or faster, at a much lower price point. When we get into triple and Quad GPU configuration testing this may change somewhat, but there is likely to be very few times that any of AMD's 3rd Generation Threadripper CPUs are a performance bottleneck in Resolve.

Of course, there are some uses for the AMD Threadripper 3990X 64 Core within the greater video editing industry. For VFX work, this CPU is excellent for ray-traced rendering. It also should do very well when transcoding large amounts of media in parallel. If your system will be used for this type of work in addition to DaVinci Resolve, the nice thing is that if you do decide to go with the 3990X, you are not going to be sacrificing much (if any) performance in Resolve to do so.

Keep in mind that the benchmark results in this article are strictly for DaVinci Resolve and that performance will vary widely in different applications. If your workflow includes other software packages (we have similar articles for Photoshop, Lightroom Classic, After Effects, Premiere Pro, and many others), you need to consider how the processor will perform in all those applications. Be sure to check our list of Hardware Articles to keep up to date on how all of these software packages perform with the latest CPUs.