Skip to content
Always look at the date when you read an article. Some of the content in this article is most likely out of date, as it was written on January 28, 2021. For newer information, see our more recent articles.

In addition, another advantage for Workstation cards that can be a factor for DaVinci Resolve users is that they are designed with multi-GPU configurations in mind. While there are some blower-style NVIDIA GeForce cards, having more than one or two GeForce cards installed in a system is not something that NVIDIA specifically designs them for. 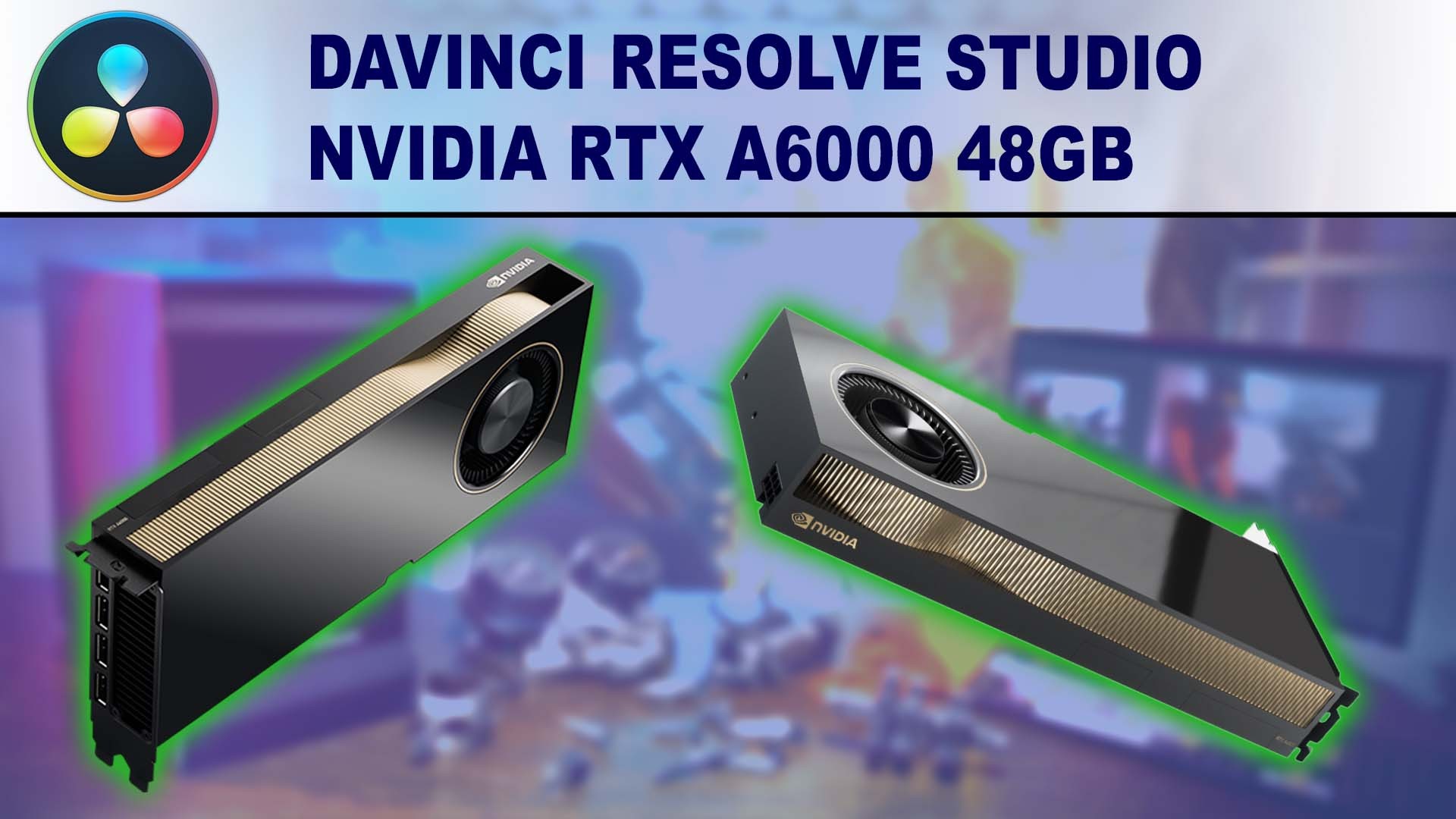 48GB of VRAM is not necessary for most Resolve users, but if you work with especially high-resolution media (12K+) and make heavy use of OpenFX and noise reduction, having 48GB of VRAM can be the difference between a smooth workflow and one plagued with "Your GPU memory is full" errors. Considering that the RTX A6000 48GB is $850 less than the RTX 8000 48GB (which adds up quickly if you want multiple GPUs), the A6000 is already attractive from a straight price perspective – not to mention any performance improvements there may also be.

To test each GPU, we will be using the fastest platform currently available for DaVinci Resolve – most notably the AMD Threadripper 3970X. Since Resolve can utilize the CPU heavily in some workloads, this should minimize the impact of the processor and allow each GPU to perform at its fullest potential.

To see how the RTX A6000 performs, we will be comparing it to most of the mid to high-end NVIDIA Quadro GPUs from the previous generation as well as the Quadro P6000 from two generations ago. One thing to note is that we are not going to test the Quadro RTX 8000 since, in terms of performance, it is actually identical to the Quadro RTX 6000. The RTX 8000 does have more VRAM than the RTX 6000 (48GB vs 24GB), but since our DaVinci Resolve benchmark doesn't need more than 8GB of VRAM, that would not affect the results for our benchmark.

We will be using the "Extended" preset that includes both 4K, 8K media as well as specific GPU Effects and Fusion tests. Using 8K media with most of these GPUs is actually not a good idea as we generally recommend 20GB+ of VRAM when working with 8K media in Resolve, but our benchmark does not load the Resolve UI which means that the VRAM load is much lower; allowing GPUs with just 8GB of VRAM to successfully complete the 8K tests. 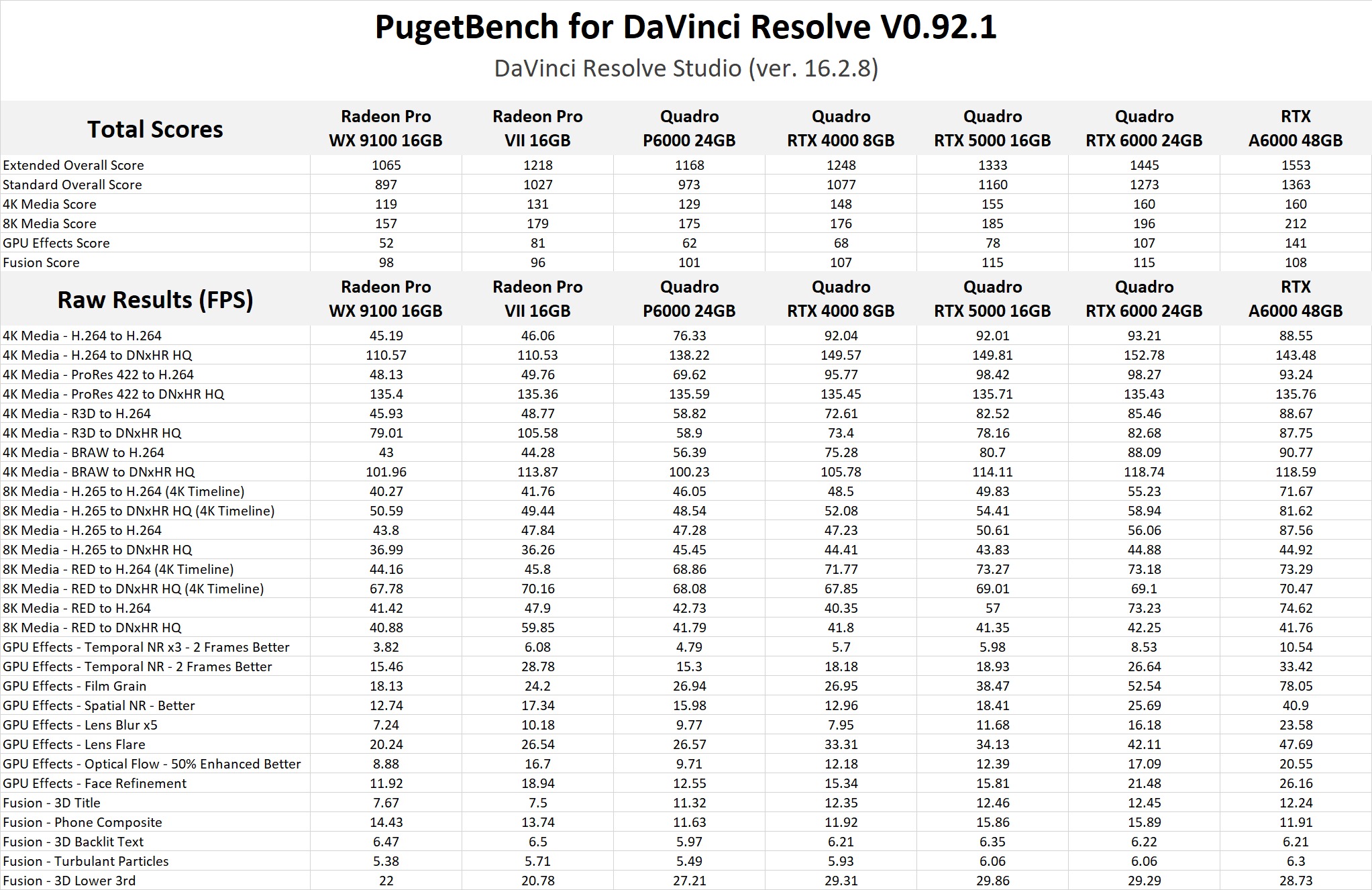 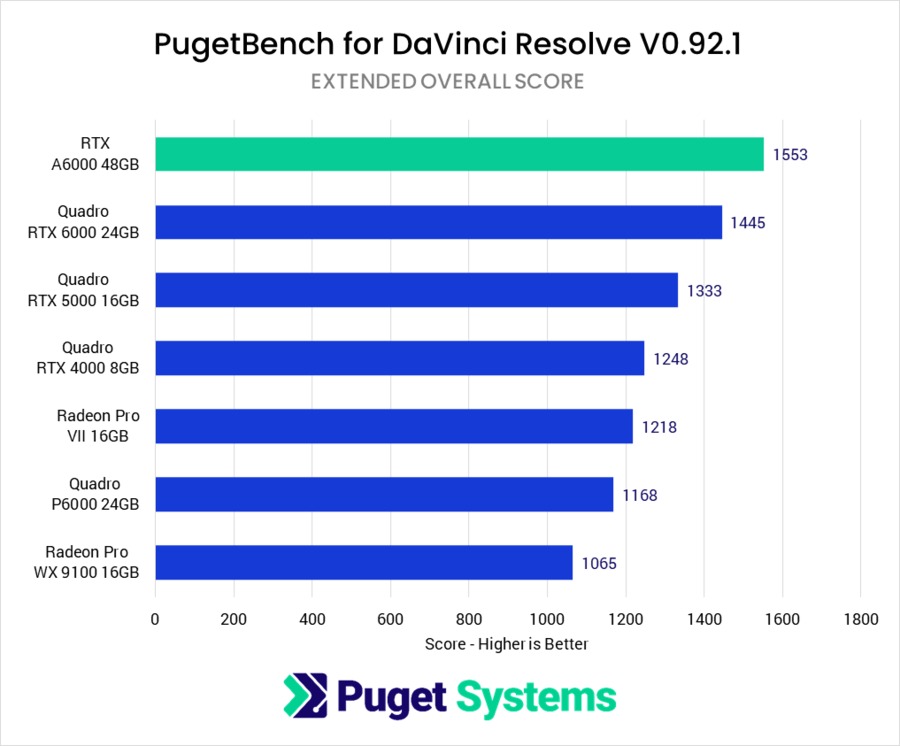 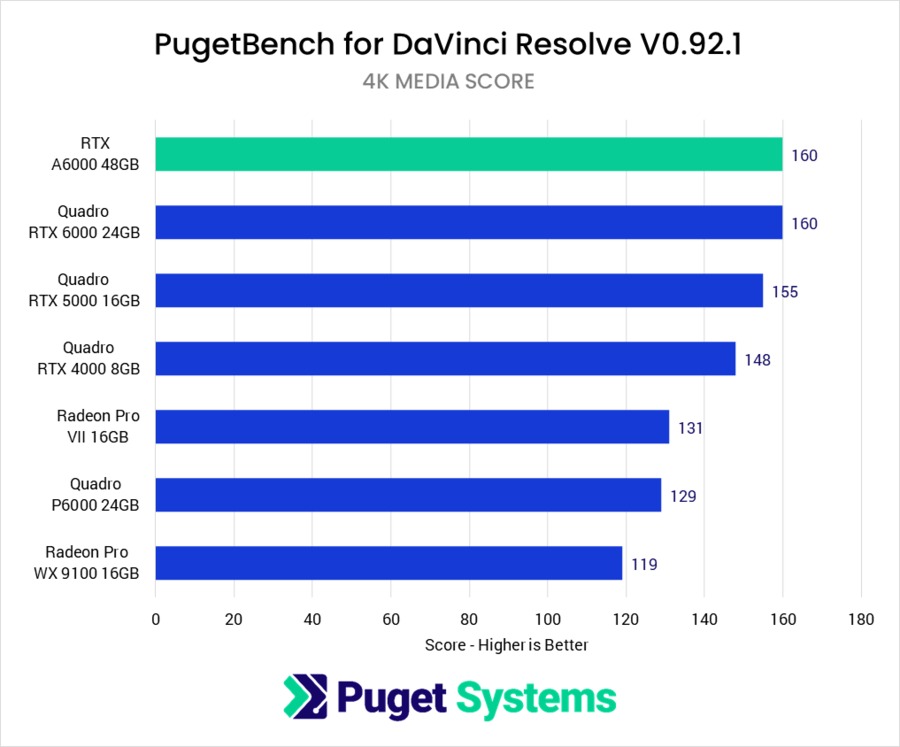 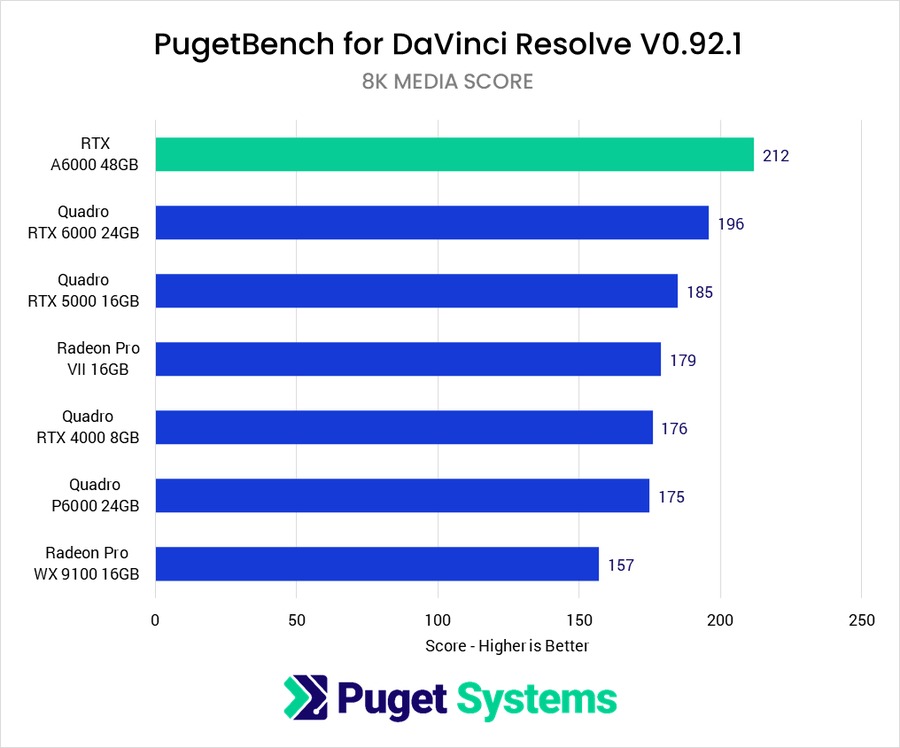 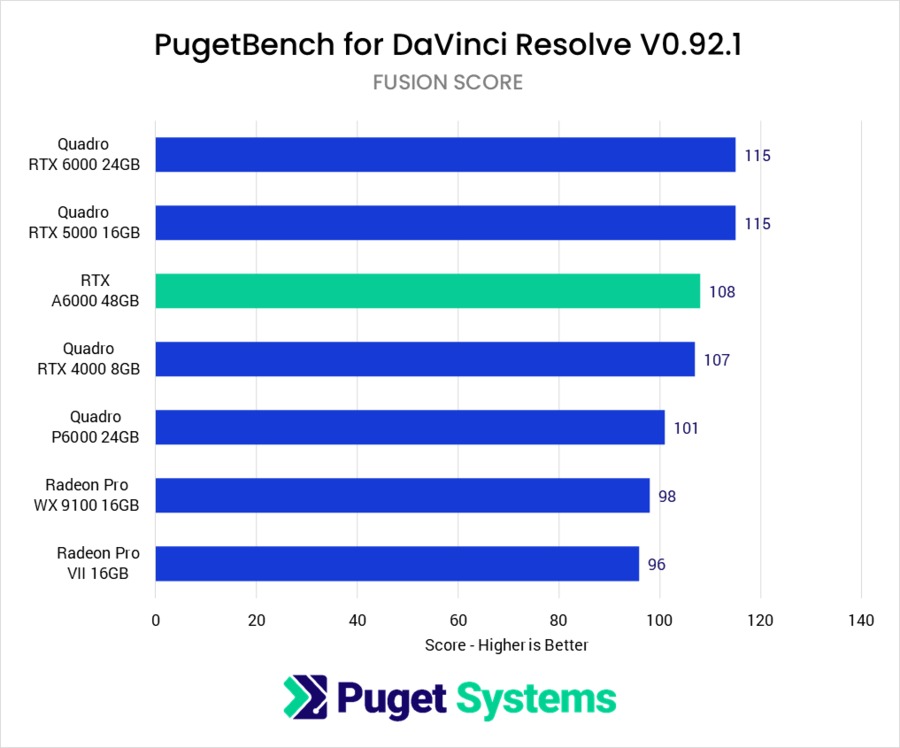 Looking at the Overall Score, the NVIDIA RTX A6000 tops the chart but only manages to sneak past the RTX 6000 from the previous generation by 8%. Compared to the Quadro P6000 from two generations ago, however. the RTX A6000 is a large 33% faster. Considering that we are looking at the Overall Score which includes a number of tests that are not directly affected by the GPU, this is a very respectable increase in performance.

Looking at the results in more detail, it is interesting to see that the RTX A6000 only manages to tie the RTX 6000 for the 4K Media tests – suggesting that even with the best CPU available for DaVinci Resolve, we are likely hitting a CPU limitation for many of those tests. Another oddity is that the performance in Fusion is a bit worse with the RTX A6000 compared to the RTX 5000 and RTX 6000. We are not sure why that would be, but Fusion has always been a bit odd for GPU performance. For example, many of our Fusion projects actually show a drop in performance as you add more GPUs to the system.

Bear in mind that this looking at the Overall Score which includes the performance for a number of tests that can be CPU bound. To get a better idea of the maximum performance difference between these cards, we should hone in on the "GPU Effects" portion of our benchmark which looks at tasks like TNR and various GPU-accelerated OpenFX. 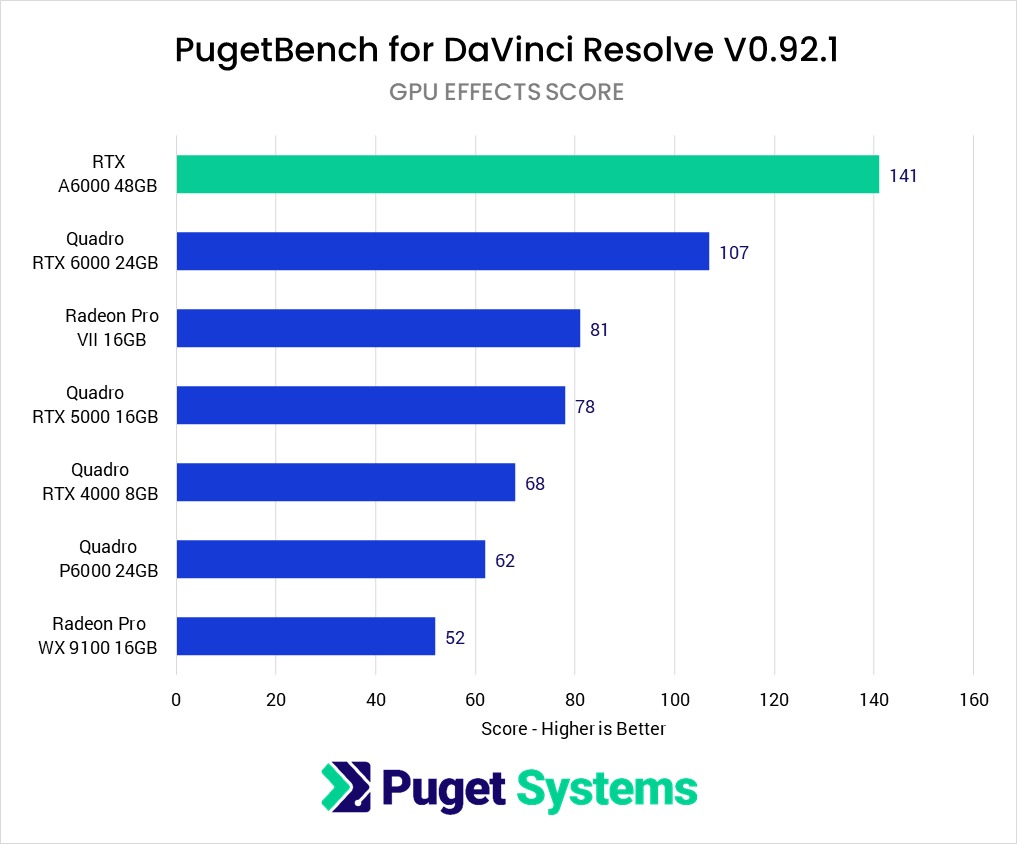 For this test, the RTX A6000 again tops the chart, but this time by a significantly larger margin. It ended up performing about 32% faster than the RTX 6000 or just over 2.25x (!) faster than the Quadro P6000 from just two generations ago. The performance gain over the RTX 6000 (which has the same performance as the RTX 8000 48GB) is big enough by itself, but if you have an older GPU and looking for a workstation-class upgrade, the A6000 can give you a huge boost to performance.

We again want to point out that workstation cards like the RTX A6000 are not solely about performance, but for those that want to know how it performs relative to the NVIDIA GeForce line, you can compare it to the results in our recent DaVinci Resolve Studio – AMD Radeon RX 6900 XT Performance article. In terms of just straight-up performance, the GPU score of ~141 for the RTX A6000 48GB puts it right between the GeForce RTX 3080 10GB and the RTX 3090 24GB (only with more VRAM, higher reliability, and all the other workstation-only features).

How well does the NVIDIA RTX A6000 48GB perform in DaVinci Resolve Studio?

Another aspect to consider is the fact that the RTX A6000 has a 50W lower TDP than the GeForce RTX 3090 (300W vs 350W). This is important because as we discovered in our Quad GeForce RTX 3090 in a desktop – Does it work? post, a workstation with four RTX 3090 cards ended up using ~1700 watts of power which is more than most 120V electrical circuits is able to reliably provide over long periods of time. If the RTX A6000 is able to drop that down to 1500 watts with four cards, that could make a quad GPU setup with RTX A6000's the fastest desktop solution you can get for Resolve without needing dual power supplies or other non-standard power configurations.

Unfortunately, at the moment we do not have access to four RTX A6000 cards, but looking at the performance with four of these cards in DaVinci Resolve is something we certainly want to test as soon as we are able to!

As always, keep in mind that these results are strictly for DaVinci Resolve. If you have performance concerns for other applications in your workflow, we highly recommend checking out our Hardware Articles (you can filter by "Video Card") for the latest information on how a range of applications perform with the new GPUs from AMD and NVIDIA, as well as with different CPUs and other hardware.