A few years back, Ageia Technologies, a semiconductor company located in Santa Clara California, launched a product designed to help handle the increasingly complex physics calculations which were becoming popular in modern games. They named this product "PhysX", and it was the world's first dedicated physics card. Enthusiasts were excited, and many thought that this technology was set to be the next piece of essential hardware for enthusiast systems.

Ageia impressed everyone with demonstrations of what their product could do. Fluids flowed with more ripples, sparks were much more abundant, and the classic explosion was much more satisfying. Enthusiasts were excited about the new technology and were eager to employ this new hardware onto their own systems. But the enthusiasts were not alone - Nvidia was also interested in this new technology. In 2008, Nvidia acquired Ageia and their PhysX products. The PhysX engine is now known as Nvidia PhysX.

After several revisions, Nvidia completed their project and released their first driver package that included PhysX compatibility. By accessing the Nvidia control panel and enabling the option, a supported Nvidia card could now perform both functions at once. Nvidia continued to work on their PhysX platform, which now has the ability to offload the physics processing onto a second supported Nvidia card.

One of the biggest questions consumers have about this sort of new technology is "how much will this really make a difference?". We decided to independently test the Nvidia PhysX platform, and share our results.

We'll be using the benchmarks included with Far Cry 2 and H.A.W.X to get results from games that have various levels of effects; we will also be using the Cryostasis tech demo. Cryostasis has a high amount of specific PhysX code and extensively uses the PhysX technology.

We'll be presenting the results of several configurations for each of 3 video cards. We list the video card setup on the left, and then parenthetically note the PhysX state (enabled, disabled, or a dedicated video card for PhysX). 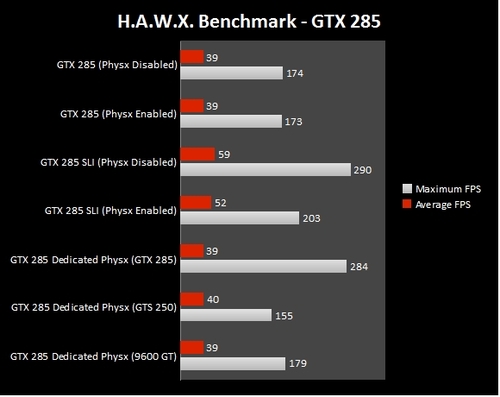 The clear winner in the above comparison is the GTX 285 SLI setup with the PhysX disabled. When using a single GTX 285, enabling PhysX gives yields almost no performance change. There is not a significantly large impact on performance by adding a dedicated PhysX card and H.A.W.X looks to run better with PhysX disabled. 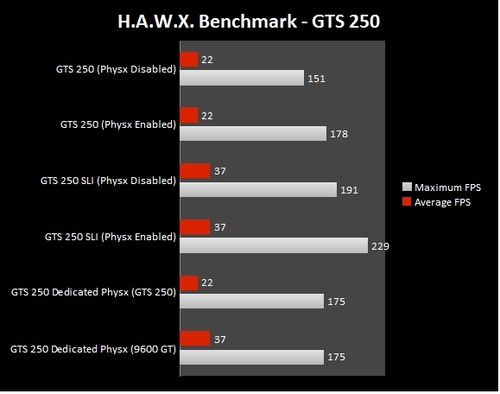 The GTS 250 as a standalone card has a lower average FPS, but nearly equal maximum FPS scores. With the GTS 250's in an SLI configuration we find a better mean score and it performs better with a 9600 GT for a dedicated PhysX card compared to a dedicated GTS 250. 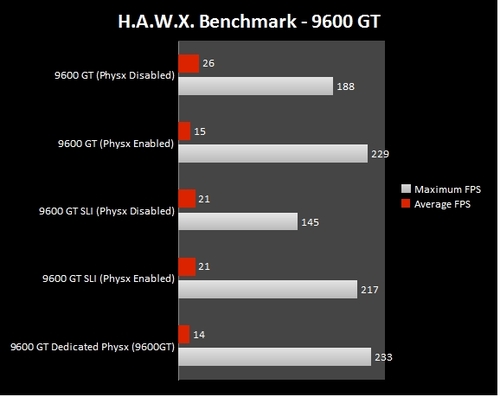 The 9600 GT placed on the lowest tier of the three. It did have much better maximum FPS as compared to the GTS 250 but with lower average scores, several sections of the benchmarks slowed to a crawl. It also performed best as a standalone card, when compared to its SLI setup.

Far Cry 2 has a good mix of both environmental and special effects and can be demanding of hardware to run smoothly, the most notable system performance demands being fire effects. 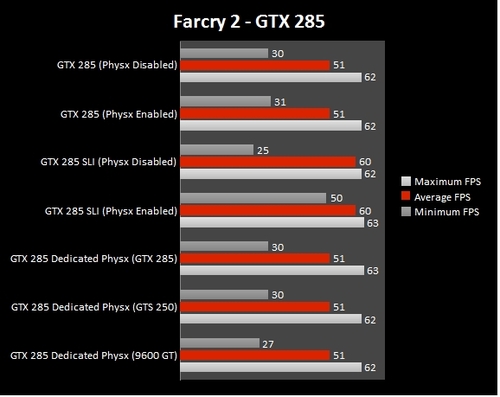 In Far Cry 2, one very noticeable finding is that all three dedicated configurations gave us very similar results. All three configurations performed just like the single GTX 285 in each mode. A pair of GTX 285's with PhysX enabled out-performs all the other setups. 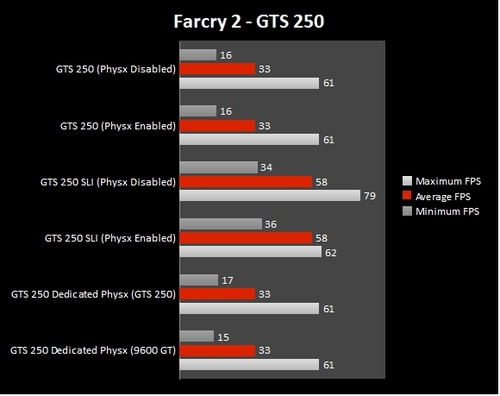 The GTS 250's gave us very consistent scores. Both SLI modes showed similar scores. Single card configurations, as well as having a dedicated PhysX card were very similar in benchmarks. This was almost a mirrored pattern that we saw with the GTX 285 configurations. 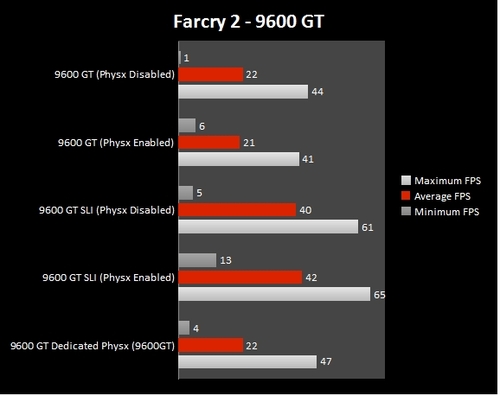 Like the other two configurations, the 9600 GT's gave us similar results. Summary: Far Cry 2 benefits the most from an SLI setup with PhysX enabled.

Cryostasis heavily applies PhysX and we're excited to see nVidia's feature shine at its best. With PhysX, we see water droplets bouncing off characters, streaming across floors, smaller puddles combining together to form larger ones, and falling objects making a splash into pools of water. This is a great example of how PhysX can be put to good use in video games. 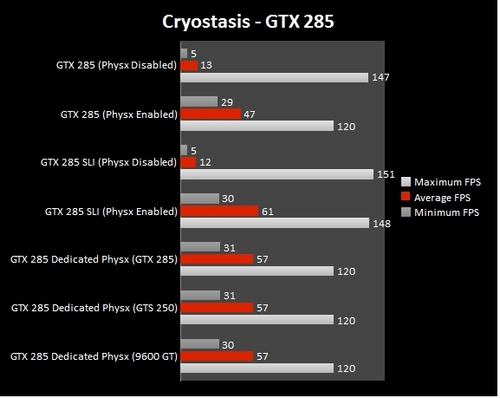 The pattern is pretty straightforward. With PhysX enabled we get decent scores and smooth game play. Turn off PhysX and the scores drop significantly. The SLI with PhysX configuration took high score but across the chart we saw similar results. [Note: The high maximum FPS is reflective of the ten seconds where physics are not in play, and thus maximum FPS scores shoot up.] 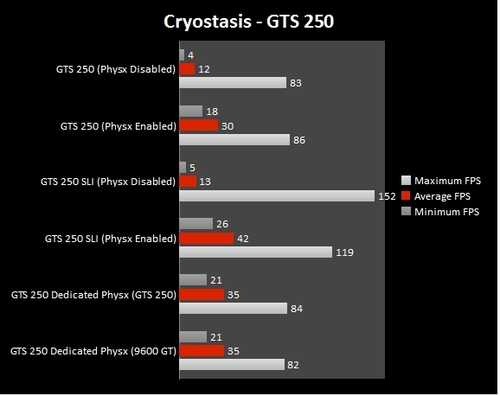 The GTS 250 continues the pattern - PhysX is a massive boost in performance, and for the first time we see a dedicated physx card give a significant performance boost - although it's still inferior to a SLI setup. 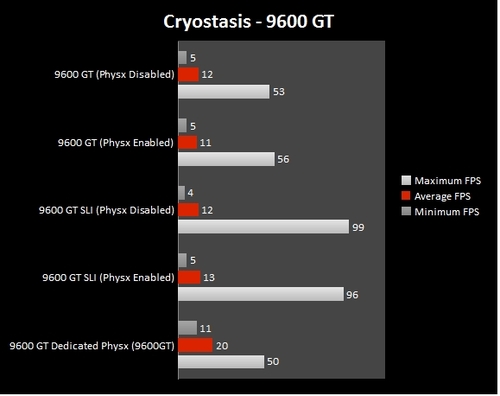 After looking over the results, we can see that the overall best configuration for PhysX has to be an SLI setup with PhysX enabled. Unsurprisingly, it is also the most expensive of all the configurations.

Single card setups perform very similar with or without PhysX enabled and the user shouldn't hesitate to turn on the function. As for dedicated PhysX card configurations, benchmarks show us that the single card counterpart performs just as well in most scenarios. In many cases, dedicated cards just do not have much of a performance benefit, and will simply add expense, heat and complexity to a system. Until more games can be heavily optimized for these types of special effects which utilize the PhysX engine, there is just not much benefit in dedicating a video card to handle the physics workload.

The potential for PhysX is great, but will depend on whether developers will want to embrace this technology. It's no coincidence that the PhysX engine has the biggest impact in Cryostasis, which has been coded specifically to take advantage of PhysX. If more developers start to take advantage of this in a future, expect to see PhysX become a more important feature. For now, our purchasing advice is to enable PhysX on any compatible Nvidia card, but hold off on purchasing a dedicated card for the task.