How to Set Up Multiple Monitors

When it comes to setting up a new computer, something we get asked about here at Puget Systems on a regular basis is the use of multiple monitors. The use of dual monitors seems to be the most common goal customers have, but many want three or even more - and so we are often asked if that requires two video cards, how easy it is to set up, and even how to use multiple screens effectively. This article aims to answer some of those basic questions and act as a central resource for folks who are considering a new computer or want to upgrade their existing system.

Why Use Multiple Monitors?

Before going on to the 'hows' of multiple monitors, it might be helpful to explain the 'whys'. I have talked to some people who are intrigued by the idea of more than one screen on their computer, but aren't sure if it is something they would really use. I personally use three monitors here at work, and I think everyone here in our office has at least two (Jon, our company president, uses four!). Here are some ways that multiple monitors can be used to increase productivity, either from my personal experience or from customers I've spoken with:

That is only a few examples of what people might do with multiple monitors, but it should give some idea of the capabilities and options that such a setup allows. If any of those possibilities interest you, please read on for information on what sort of hardware is needed and how to set it up within Windows.

All modern video cards support at least two monitor outputs, and many support even more. AMD's Radeon line, in particular, has had support for three or more monitors from several of their recent generations of cards (from the Radeon 5000 and up). When planning out a multiple monitor setup, though, you need to pay close attention to what inputs your monitors needs and make sure the video card you get matches, and to what resolutions are supported. There are adapters available from one type of plug to another in many cases, but not necessarily for every connection type out there... and using adapters adds cost, increases complexity, and can change the maximum supported resolution as well. Here is a rundown of the main four types of monitor connections out there:

If a single video card is not enough to support the number or type of screens you want, two (or more) cards can be employed. When doing this it is strongly recommended to use cards from the same product line, though they don't have to be the exact same model unless you are using a special setup like SLI or Crossfire for gaming. If you go for multiple video cards, making sure the motherboard and power supply can handle them is important - as is getting a case with plenty of airflow to keep everything cool.

I should also mention that for folks on a budget some motherboards have onboard graphics which can run one or even two monitors. For basic uses those may actually be enough, or they can be used in tandem with a dedicated card to provide 3+ screen support at a reduced price. The downside with onboard graphics is that performance tends to be limited, so while it may work great for office or business applications it is not usually ideal for gaming or media editing.

Another thing to consider with the physical setup of multiple monitors is how to arrange them neatly on a desk. For just two or even three screens, the existing stands they come with often work just fine. However, as you get into four or more screens it may be desirable to have some sort of framework on which to mount them. We don't sell anything like that here at Puget Systems, but there are several companies out there which specialize in making stands for multiple displays. Some even sell kits which include monitors already, allowing you to avoid any concerns over whether a specific model of monitor will properly fit. 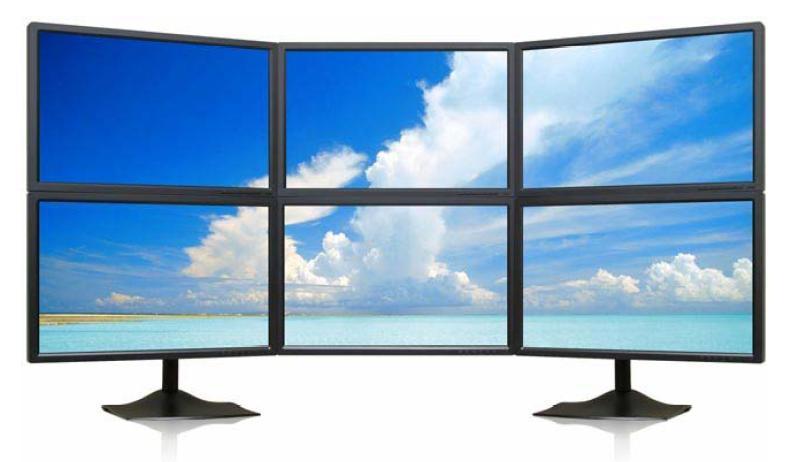 Once you have the physical setup figured out - both the cards in the computer and the monitors - it is time to set things up on the software side. Windows 7 has native management for multiple monitors, which covers the basics: location of monitors relative to each other, resolution of each screen, and orientation (portrait vs landscape). 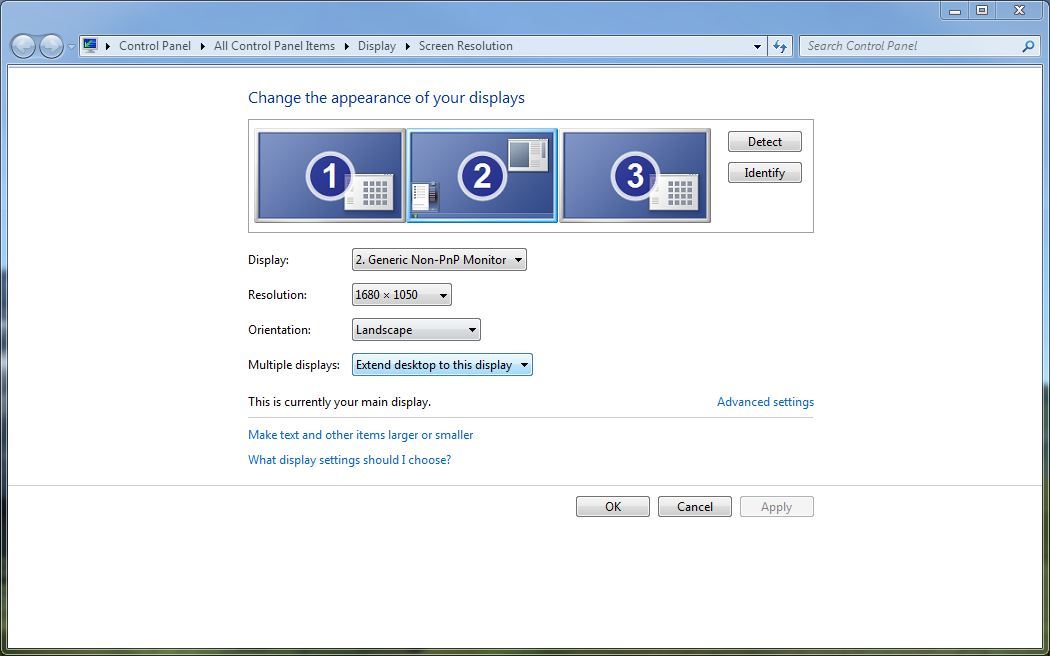 When you first plug everything in there is a good chance that Windows will not guess correctly at how the monitors are located relative to each other in the real world, so the first thing to do is to click Identify. That will pop up a number on each screen, which corresponds with the way Windows addresses them. Look at where the numbered monitors are on your desk, and then rearrange the screens in the display settings to match. Once that is done, you should be able to move your mouse cursor back and forth between them in a natural fashion.

Once that is done, make sure the resolution settings are correct. You should only need to adjust orientation if your are rotation your monitors to a horizontal position, but if you are doing so then it may help to adjust that before arranging the screens as described above. When everything is finished you should be able to move windows around between screens, and maximizing a window will fill up the screen in which the majority of the window is positioned when you click on the maximize button.

If you want to set up monitors to duplicate each other, that can be done as well. In order to do so the monitors you want to duplicate have to be connected to the same video card. With that done, on the Windows 7 interface shown above you select one of the monitors to be in the pairing, go to the "Multiple displays" drop-down menu, and select the "Duplicate desktop" option. If you have multiple video cards this feature can allow for some interesting setups in specialized situations.

Both AMD and nVidia also have their own monitor management software, built into the control panels for their drivers. For basic setups like I’ve mentioned so far it doesn’t matter whether you use that or the native Windows controls, unless you happen to mix and have both AMD and nVidia cards: in that case you will need to use the Windows controls, as neither of the other options would let you adjust all of the monitors at the same time.  Mixing in that fashion isn’t recommended anyways, though, as it can lead to driver conflicts and other issues. 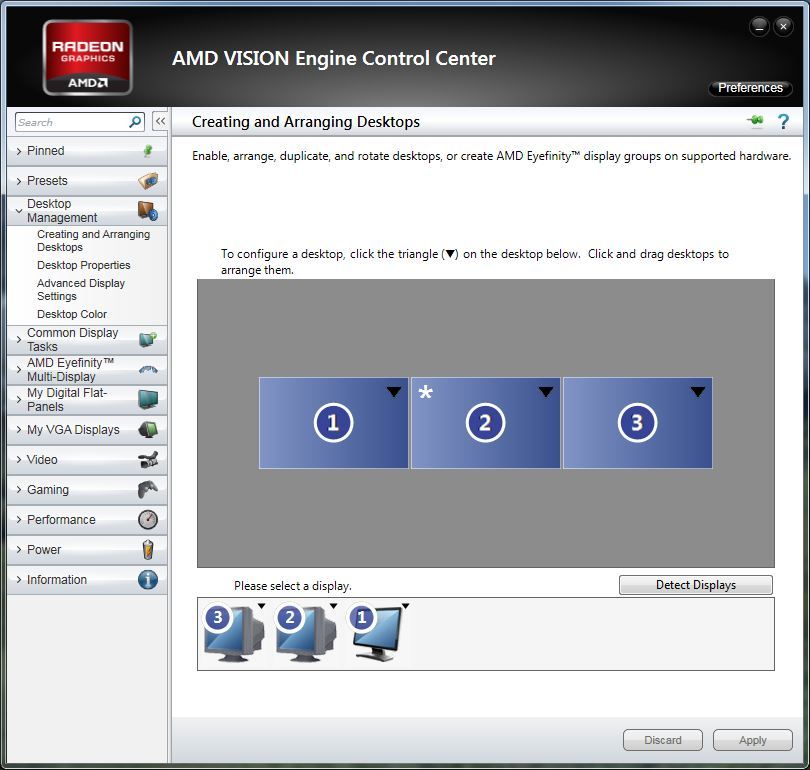 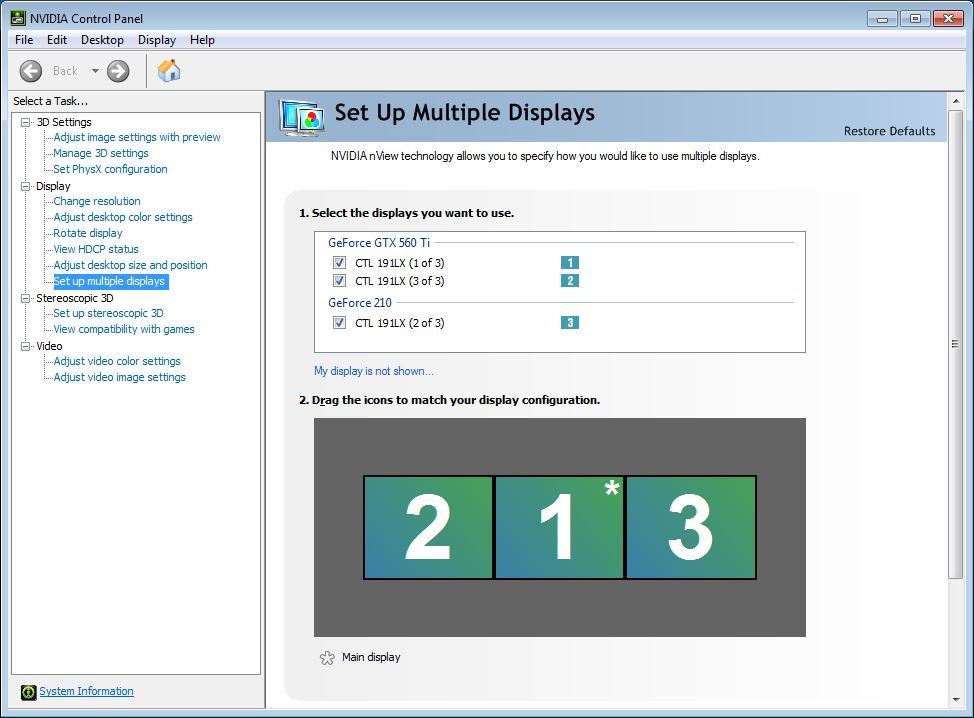 However, if you want to set up more advanced options then at some point you will need to use the proprietary configuration options. This is particularly the case if you want to use AMD’s Eyefinity or nVidia’s Surround setups. Both of these aim to combine multiple physical monitors into a what is effectively a single larger screen, rather than individual screens that happen to reside next to each other. nVidia aims their version of this primarily at gamers, offering the ability to run three screens next to each other for a more immersive gaming experience. If you have monitors that support 3D Vision, these two features can be combined to give a 3D gaming experience at up to 5760 x 1080 resolution (three 1920x1080 screens side by side). Should you stick to 2D gaming, larger resolution monitors can be used - up to 7680 x 1600 if you have a powerful enough graphics card configuration (three 2560x1600 screens).

AMD aims at both gamers and other power users with their Eyefinity options. For one thing they support more than three screens at a time, and they also allow for some screens to be in an Eyefinity configuration while others are not (which allows mixing of landscape and portrait orientations as well). Their cards also lend themselves better to running more than four screens, as each card can run three to six screens depending on the model - while nVidia cards are currently limited to two outputs per GPU.

There are also third-party programs which can add even more functionality, like UltraMon.  It augments the basic Windows multi-monitor features by adding a taskbar to each screen, shortcuts for sending programs directly to different monitors, and more. Some of the advantages it brings are discussed on this blog post.

That pretty much covers the reasons and methods behind setting up multiple monitors. Any questions arising from this info can be discussed on our forums, or if you are in the market for a system with this sort of configuration please contact our sales consultants if you need further guidance.