AMD's new Radeon VII video card is very impressive on paper with its most notable feature being the fact that it has 16GB of VRAM. This is a huge amount of video memory that is frankly unheard of on a card at this price point since the MSRP of the Radeon VII is just $699. To put this in perspective, the similarly priced GeForce RTX 2070 or 2080 only have 8GB and the NVIDIA RTX 2080 Ti (which has a MSRP of $1,199) has 11GB of VRAM. You have to go up to the Titan RTX 24GB (MSRP of $2,499) in order to get more VRAM from a modern consumer GPU.

However, while 16GB of VRAM is impressive, it really isn't necessary for Photoshop. There are always exceptions, but for the vast majority of Photoshop users, a GPU with 6 or 8GB of VRAM is going to be more than enough. What this means is that whether the Radeon VII is good for Photoshop or not is going to come down to straight up performance. 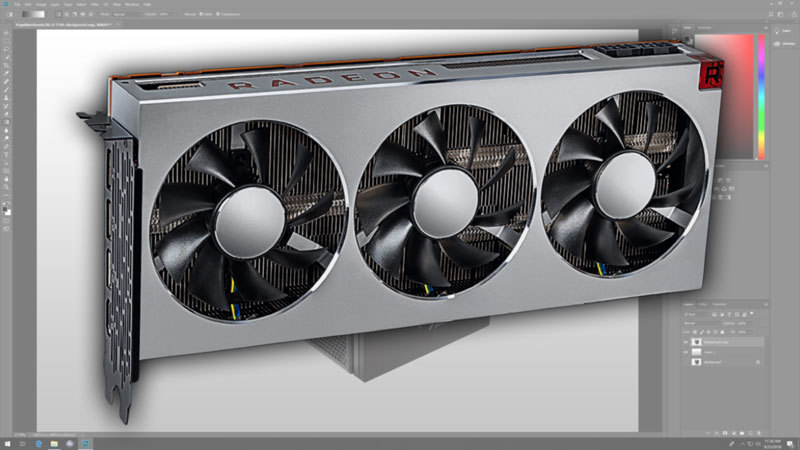 In this article, we are going to take a look at how the AMD Radeon VII stacks up against the AMD RX Vega 64 as well as the entire NVIDIA GeForce RTX lineup - plus the Titan RTX. We also have (or will soon have) a number of articles available looking at the performance of the Radeon VII in a range of other applications that you can view by filtering our recent articles to just those about Video Cards.

Listed below is the system we will be using in our Photoshop CC 2019 testing:

For the testing itself, we will be using Photoshop CC 2019 (ver. 20.0.3) along with version 18.10 of our Puget Systems Photoshop CC Benchmark which is currently available for public download. This benchmark tests a range of general tasks (open/save, resize, content aware fill, etc.), filters, as well as panorama photomerge. Full details on the benchmark are available on the benchmark download page.

While our benchmark presents various scores based on the performance of each type of task, we also wanted to provide the individual results in case there is a specific task someone may be interested in (GPU accelerated tasks are colored in blue). Feel free to skip to the next section for our analysis of these results. 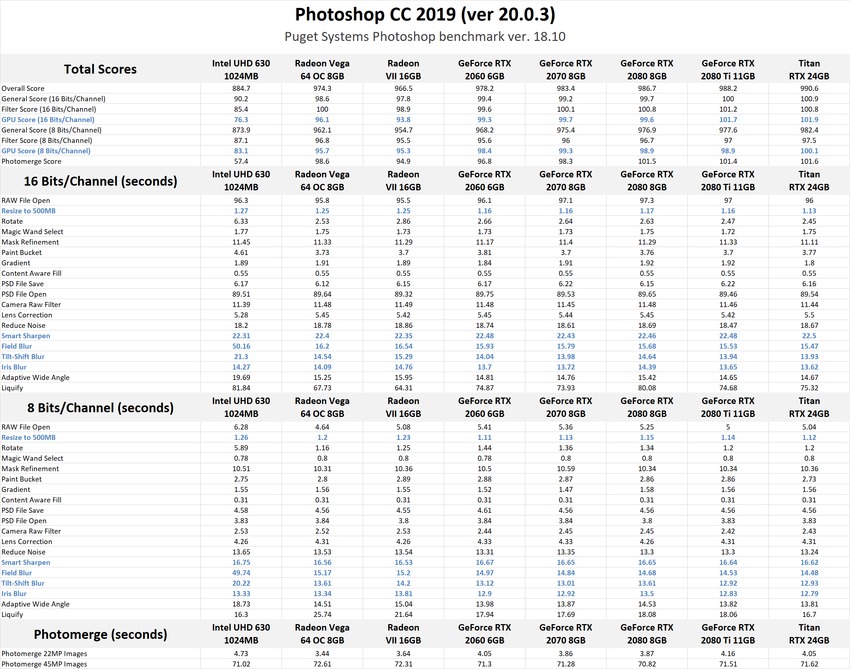 Our Photoshop benchmark (which is available for public download) tests a large number of tasks that we split into 3 categories: General, Filter, Photomerge; but there is also a GPU-accelerated score which contains results from any general and filter tests that utilize the GPU. With the exception of Photomerge, we also run each test in both 8 bits/channel and 16 bits/channel mode. These results all combine into a single "Overall Score" that represents the overall performance of the system in Photoshop.

Since we are really concerned about GPU performance in this article, we are primarily going to look at the GPU score in 16 Bits/channel mode. Oddly enough, the AMD Radeon VII was the slowest discrete GPU we tested. Photoshop in general isn't too reliant on the performance of your GPU, but the Radeon VII was still about 2% slower than the AMD RX Vega 64 or about 6% slower than the RTX 2070.

We are really not sure why the Radeon VII did so poorly. We tried a number of AMD GPU drivers ranging from the newest (19.3.1) to the oldest version available (19.2.1) as well as with slightly older versions of Photoshop and Windows 10. In each case, the results were consistent. For whatever reason, the Radeon VII simply has troubles with Photoshop right now. It is not bad enough that you would really notice it most likely, but there is definitely no performance advantage to using the Radeon VII over a Vega 64 or really any NVIDIA RTX card.

Is the AMD Radeon VII 16GB good for Photoshop?

With the drivers and versions of Photoshop CC 2019 that are currently available, the AMD Radeon VII 16GB is a bit of a disappointment. There is very obviously some sort of issue going on since it ended up scoring about 2% slower than the AMD Vega 64, but when or if performance will improve in the future is not something we can answer.

All in all, this really means that if you need a GPU for Photoshop, the Radeon VII is definitely not the right pick. The 16GB of VRAM sounds great, but it is frankly overkill for Photoshop since even 8GB of VRAM is going to be more than enough for the vast majority of users. If you are looking for a GPU at this price point, the NVIDIA RTX 2070 8GB is a strictly better card for Photoshop right now since it is cheaper, 6% faster, and consumes less power (which also means less noise).

Of course, very few workflows involve just one piece of software. Because of this, we highly recommend checking out our recent Video Card articles where we look at - or will be looking at - the performance of the Radeon VII in Premiere Pro, After Effects, DaVinci Resolve, as well as a number of other applications.