Written on May 4, 2012 by Matt Bach
Share:
Always look at the date when you read a hardware article. Some of the content in this article is most likely out of date, as it was written on May 4, 2012. For newer information, see our more recent articles. 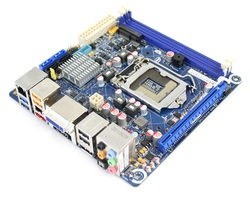 With the launch of the new 7-series chipsets, we spent the last few weeks looking at numerous Mini-ITX motherboards in order to update our Echo line of systems. There are many boards available from various manufactures, but the motherboard that immediately caught our attention was the Intel DH77DF. On our Echo line of systems, there are a variety of features that we have found to be very important to our customers including 7.1 audio, multiple video ports and wireless technology.

Finally, the matter of wireless is where this motherboard really gets interesting. On Mini-ITX systems, wireless is usually either a choice of using the integrated wireless (if available) or an external USB adapter. The Intel DH77DF is interesting because it gives a third option by the way of an internal mini PCIe slot (just like the slots found on laptops) which allows you to install any after-market Mini PCIe card (such as the Intel 6230 wifi card). The I/O shield even includes a pair of cut-outs allowing you to mount a pair of wifi antennas. The problem with this design is that it is somewhat difficult to find just the right antenna adapters and cables that will allow you to utilize a Mini PCIe wireless card at a decent price. 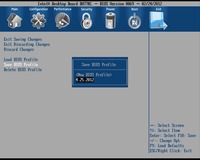 Overall, the BIOS on the Intel DH77DF is much nicer than we are used to seeing on Intel motherboards. Granted we typically use Intel more for their server motherboards which tend to have simpler BIOS options. This BIOS, however, has a fully visual BIOS which allows you to navigate using either a keyboard or a mouse. Most of the standard settings are available; allowing you to enable/disable various components, set the amount of RAM that the onboard video can utilize, control the fan headers, and even save a BIOS profile for easy recovery later.

There are however two issues with this BIOS. The first is that while you can set RAM timings and voltage, you cannot manually set the frequency. In order to use RAM faster than DDR3-1333, you must use the XMP profile available for that RAM. When using an XMP profile, you cannot manually adjust timings or voltage, however, so you lose some of the manual control when using DDR3-1600 or faster RAM.

The second issue is that is that the method for setting the CPU/System fan throttling is not very intuitive. First, you need to set or verify that the fan control is set to auto with a minimum and maximum duty cycle. While you can adjust these settings for either higher performance (by increasing the minimum duty cycle) or for lower noise (by lowering the maximum duty cycle), we recommend keeping the minimum at 20 and the maximum at 100. The second place you need to change the BIOS settings is under the "Processor Temperature" entry. From here, you need to set the temperature that the system tries to maintain (Control Temperature) as well as the temperature that the fan runs at 100% (All-on Temperature). We recommend setting these at 70 °C and 80 °C respectively.

Connectivity covers the external ports on the I/O panel, the internal headers, the PCI-E slots on the motherboard, as well as the networking options. Since this motherboard only has a single PCIe 3.0 x16 slot, we will be skipping the PCIe slot portion of our qualification. With that said, let's take a look at what external/internal ports and headers are available on this motherboard:

Most of the ports are fairly standard, but there are a few that we want to specifically point out. First, the fact that there are two internal USB 2.0 and one USB 3.0 header on an mini-ITX motherboard is not common, but is very welcome. While Puget Systems currently does not offer any Mini-ITX chassis with front USB 3.0 ports, we do offer the Antec ISK-100 which has four front USB 2.0 ports which requires two internal USB 2.0 headers. The USB 3.0 is great for future-proofing even if no current mini-ITX chassis needs a USB 3.0 header yet. One thing to point out about the USB 2.0 ports is that half of them (the yellow ports) are high-current ports. High current USB ports are needed in order to charge some devices directly from the USB port.

This motherboard does not include any built-in wireless, but does have a mini PCIe slot which can be used to either install a third party wireless card or a mSATA hard drive. The I/O shield for this motherboard also includes a pair of cut-outs to allow for easy mounting of dual wireless antennas. This allows for the use of mini PCIe wireless cards (typically found in laptops) that are in general much better than the wireless adapters typically found in desktop systems. The only difficulty with this design is that internal wireless antennas are somewhat difficult to find and purchase.

After reviewing the layout of the motherboard, there are only two things that we do not like and both are simply a result of how little space there is on a mini-ITX motherboard. The first thing is that the CMOS battery (B on the schematic) is not actually on the motherboard itself, but is taped to the back of the USB/HDMI ports and connected to the motherboard via a wire. While this is not too big of a deal, it makes it much harder to replace the battery if/when the charge eventually runs out. Instead of being able to go to any store that sells small batteries to get a replacement, you instead need to get an exact replacement from Intel.

The second minor issue is the location of the 4-pin ATX power header (Z on the schematic). Rather than being near the edge of the motherboard, it is just behind the IO panel at about the middle of the board. This is a bit of annoying place for the plug, but we had no problems plugging in the 4-pin ATX power even in the Antec ISK 110 VESA which has a very short 4-pin ATX cable.

Everything else on this board is fairly standard with the majority of the headers located along the side of the motherboard.

The majority of the other checkpoints are designed to verify that the motherboard will function properly with a wide range of hardware. For that reason, we test using onboard video, Nvidia Geforce, AMD Radeon HD and Nvidia Quadro based video cards. We also test the motherboard with the largest quantity of RAM we can (2 x 8GB sticks) and with the fastest RAM currently offered by Puget Systems (DDR3-1600MHz).

Product testing simply can't go any smoother than it did on this motherboard. Simply put, we had absolutely no issues come up at any point in our testing. The system passed every benchmark we threw at it, and easily completely our standby and reboot loops.

Drivers in both Windows and Linux installed without any surprises and the system was rock solid using any GPU or RAM combination. We hate to have such a bare section in our qualification, but there simply isn't anything else to say except that this motherboard was absolutely flawless. 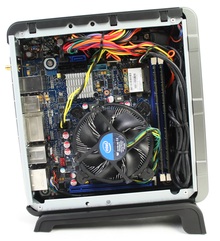 Considering how easily the Intel DH77DF passed our stability and compatibility testing, we can honestly say that we have very little negative to say about this motherboard. In fact, the worse thing we can say about the motherboard itself is that configuring the CPU fan throttling in the BIOS is more confusing than it needs to be.

The number of internal and external USB ports is great and will allow this board to be used in almost any Mini-ITX chassis. The three video ports (DVI, HDMI and Display Port) gives plenty of video options and the inclusion of Firewire and ESATA will allow almost any modern device to be connected to this motherboard.

We also really like the inclusion of the Mini-PCIe slot. While this slot will typically be used for wireless, it can also be used for any other Mini-PCIe device as well. This design gives the end user a great deal of flexibility when it comes to choosing a wireless card since you are no longer limited to just USB wireless adapters. The only issue with this design is that since it is so rarely used, finding the right antenna adapters and cables can be a bit of a chore.

Overall, we are very happy with this motherboard, and excited to integrate it into our product line. Look for this motherboard to be used in our Intel-based Echo I and Echo II systems in the very near future!