Autodesk ReMake (formerly Memento, and soon to be ReCap Photo) is a photogrammetry application, similar to Agisoft PhotoScan. It takes a set of photos as input and uses them to create a textured 3D model of the object(s) in the photos. Autodesk publishes a basic system requirements page, but there is not much information available there regarding what hardware actually performs best for this program.

In this article we will look at several CPU options from Intel that you might consider in a workstation to see how they compare in ReMake. Autodesk's own recommendations (linked to above) seem to indicate that multiple Xeon processors are ideal, so we tested that setup along with several of the latest individual Intel Core i7 models and AMD's latest offerings.

Some of the steps in ReMake are GPU accelerated, and specifically use NVIDIA's CUDA technology, so a Quadro P6000 was included in all test configurations to ensure that video card performance would have no impact on the results. If you are interested in how different video cards perform in ReMake, we have articles covering both NVIDIA's Quadro and GeForce lines.

To see how the different CPUs perform in ReMake, we used the following configurations:

These test configurations include six Intel CPU models and three AMD processors, across five different platforms. The Core i7 7700K was included because until recently it offered the highest single-threaded performance of any processor, while the dual Xeon chips were included to see if CPU core count would trump clock speed. Autodesk recommends multiple Xeon processors specifically in their hardware recommendations, so it seemed possible that this would be the best option. To cover the gap between those extremes, we also tested the new Intel Skylake-X processors with 4 to 10 cores and the AMD Ryzen 8-core and Threadripper 16-core chips.

We performed our tests using two image sets I took: 78 photos of a chessboard and 300 photos of a rock climbing toy. ReMake supports up to 250 photos normally, and up to 1000 if you enable the higher memory setting (requiring 64GB of RAM or more). These image sets are intended to cover a fairly wide range of usage, allowing the tests to be completed within a reasonable amount of time but still large enough to see measurable performance differences between processors. On all test runs the quality was set to Ultra, along with Detailed and Fine options, in order to induce the most intensive processing possible within ReMake.

Regarding memory usage, while the different systems used here have varying amounts of system RAM this did not impact our testing. The images set we used resulting in approximately 20GB of peak system memory usage, well below the 64GB minimum found in our test systems. It is also worth noting that in order to use more than 250 images (up to 1000 maximum) ReMake requires 64GB, even though we did not see nearly that much memory in use even when testing with our larger 300 image set.

At the conclusion of each run, ReMake creates a log file that records the total time as well as several individual steps. Unfortunately, those steps are not labeled or described - so we will present only the total time here, not the various parts that make up the total. We also found that there is some variation in the time of each run, resulting in about a 4% spread if the same image set was run on the same hardware repeatedly.

Here are the results (in seconds) for the various CPUs we tested in ReMake with our smaller 78 image set: 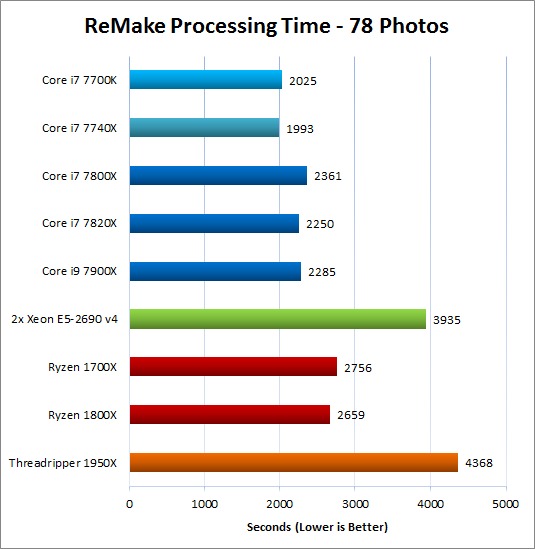 Contrary to expectations, the fastest processors turned out to be those with low core count and high clock speed. This is common in many applications, but the fact that Autodesk recommends "multiple Xeon processors" led us to believe that ReMake would scale well across a high number of CPU cores. This is not the case, though, which is actually good news for most users as the processors that performed the best are among the most affordable.

It is also worth noting that AMD's Ryzen and Threadripper processors performed poorly. This is likely a combination of their focus on core count over clock speed along with a general lack of software optimization for the new AMD Zen architecture. Whatever the reason, though, no case can be made for using these chips even when price is factored in.

Here are the results (in seconds) for the various CPUs we tested in ReMake when working with a larger set of 300 photos. Threadripper was omitted here due to its poor performance in the previous test and time constraints - this test takes nearly three hours per run on even the fastest CPUs: 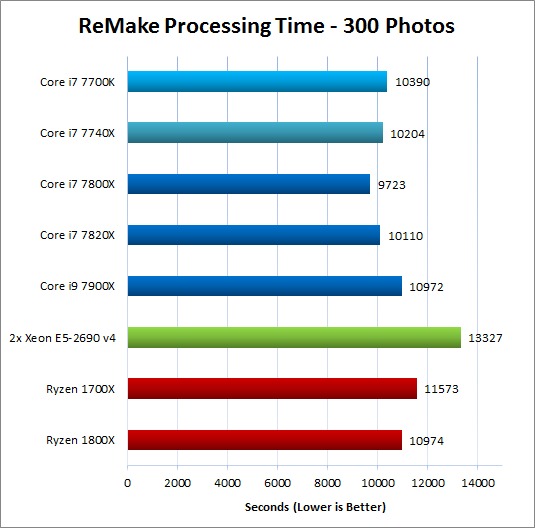 Unlike the smaller image set, this time having a few more cores did prove beneficial - enough to put Intel's i7 7800X and 7820X (with 6- and 8-cores, respectively) into the lead. Clock speed is still very important, though, and going above those two models resulted in a drop off in speed. The quad-core models are still pretty effective, but the ideal combination would be a processor at the frequency of those chips with 6-8 cores instead of 4.

AMD's Ryzen processors performed better this time around, but still lagged behind Intel's offerings. Their higher core counts help somewhat as the number of images increases, but the lower clock speeds and performance-per-clock keep them from beating Intel's Core-series processors. There may still be some improvements from software optimization as the Zen platform matures, but it would require a lot to overtake the competition in this application.

In our Quadro GPU testing, we found that there was some benefit to having dual GPUs. The effect was small when working with our 78 image set, but at the time we did not test the effect on a larger set of photos. This time around we did a quick comparison of the fastest and slowest CPUs from our 300 image set test (as shown above) to see how much adding a second Quadro P6000 video card helped:

Adding a second GPU in this case provides about a 10-15% reduction in processing times. Given the high price of a Quadro P6000 that may not be worthwhile for all users, especially since the impact with smaller image sets is much lower, but it is worth noting.

Autodesk ReMake offers the option to process image sets online as well, using their A360 cloud service. To see how that stacks up against local ("offline") processing, we ran the same 78 image test set through ReMake's "online" processing. The same settings were used insofar as possible, and the resulting file was the same size (~240MB) as the test runs on the various CPUs shown previously. 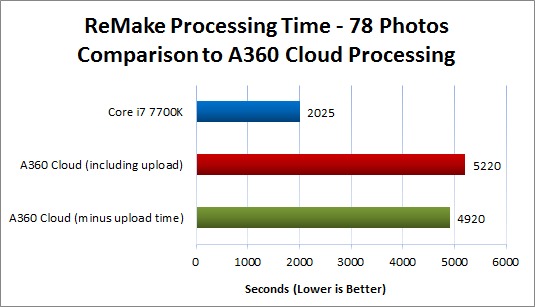 The total time taken from beginning the process until the finished file was ready for download was 1 hour and 27 minutes - or 5,220 seconds, if you want to compare to the results in the chart above. That included about five minutes of uploading the 78 images. Those total about 581MB, so the overall processing time could potentially be affected somewhat by your internet connection's upload speed. There is also the option to work directly with photos already stored on Autodesk 360, which would reduce the time taken. Even if we shave off five minutes for that, though, it leaves 4,920 seconds - more than twice as long as the fastest CPU we tested. It is possible that this may improve in the future, if Autodesk changes the hardware their 360 cloud processing runs on, and it could also be impacted by how many users are submitting jobs at once. In short: your mileage may vary.

Cloud processing does have one advantage, though: it does not place any demands on your local computer once the upload is finished. If you work from a laptop and don't want to leave the system running for extended periods of time, or if you need to move on to other tasks while you wait for the images to process, then A360 could be a viable solution. On the other hand, ReMake's cloud processing is currently limited to 250 images and lacks any option to go beyond that.

Here is a chart showing the peak amount of system memory (RAM) used by ReMake when processing our image sets. Please note that this is just the amount used by ReMake, so there will be additional memory used by the operating system itself as well as any other applications running at the same time.

This is not strictly related to CPU performance in ReMake, but it is worth mentioning for two reasons. First, it demonstrates that the memory capacity differences between the systems we tested did not impact their performance. Second, it should help give you an idea of how much system memory you need for working with ReMake. For sets of up to 250 photos you should be okay with 32GB of system memory. If you work with larger image sets, keep in mind that ReMake requires 64GB of memory to be present in order to enable the feature which allows 251 to 1000 images to be used.

Based on our test results, we recommend selecting a CPU based on the size of image sets you plan to work with. For small to mid-size photo sets, up to about 250, an Intel quad-core processor with high clock speed as the best option for ReMake. If you plan to work mostly with larger image sets or run other applications which can benefit from higher core counts then moving up to a six or eight core processor will boost performance slightly -  as long as the clock speed is kept as high as possible.

Alongside the CPU, make sure you get enough system memory to handle the image sets you plan to use. 32GB seems to be plenty for up to 250 photos, and then 64GB is required if you plan to go beyond that. The video card also plays a big role in ReMake processing time, so be sure to check out our articles covering Quadro and GeForce performance. And if you are in the market for a new workstation, we offer systems optimized for ReMake based on the testing we have performed.

Just as we were wrapping up our testing for this article, we got word that Autodesk is changing the name of ReMake to ReCap Photo. This appears to be designed to align with the existing ReCap Pro application, which is similar but focuses more on drone footage of landscapes and geography - as well as other digital scanning methods (besides photogrammetry). At first this appeared to be a mostly cosmetic update, but it looks like local processing is completely missing from ReCap Photo. We will be following up with Autodesk, since as this article shows the performance of their cloud processing is far slower than what a workstation can provide.

Once we have more information this section of the article will be updated.

UPDATE (9/22/17): It is confirmed that local processing is no longer available in ReCap Photo, and that ReMake is going away. The Autodesk FAQ on this topic contains clear answers on those subjects:

"ReMake will no longer be available as a stand-alone subscription as of September 7th, 2017 and will be replaced by ReCap Photo"

This is very unfortunate, as we've clearly shown that local computation in ReMake is substantially faster than Autodesk's current cloud implementation, even on fairly modest hardware (like a Core i7 7700K with a decent NVIDIA GPU). We had intended to add a ReMake-oriented workstation to our lineup later this year, but of course that will no longer be happening. Instead, we will continue to offer recommended systems for Photoscan, another photogrammetry program, and we may investigate other applications like this that support local computation for better performance and privacy. Please leave any thoughts you have about this in the comments below.