Always look at the date when you read a hardware article. Some of the content in this article is most likely out of date, as it was written on April 1, 2013. For newer information, see our more recent articles.

To find out how well this chassis cools, and to determine the best orientation of the CPU coolers and chassis fans, we used the following hardware:

Beyond the radiator mounting issues we already discussed, we ran into very few issues while assembling our test system in this chassis is. There is plenty of room to work and the cable management holes keep the cables nicely out of view. We ended up using an extension cable for the 24-pin ATX power cable, but this is a very common issue in EATX desktop chassis, and primarily the fault of PSU manufacturers.

The only actual issue we ran into was the fact that there are not motherboard standoff locations for every motherboard screw in our EATX motherboard which forced up to leave two empty. In Fractal's defense, EATX motherboards are really bad about sticking to a standard so this issue is very common in almost every EATX chassis we've used. Luckily, it is very easy to drill and tap new standoff locations if you feel it is necessary. In our case, the locations are not in any major stress area, so we are not worried about leaving them empty.

What we found ourselves liking the most while we were working in the chassis is simply how modular it is. Every fan mount can use either 120mm or 140mm fans and there are multiple ways you can configure the hard drive cages. The sheer number of fan locations is also great giving you the ability to fine-tune the cooling to match your hardware.

In most builds for our customers, we run the chassis fans at 5V to help reduce the noise of the system. But sometimes, especially when liquid cooling is being used, cooling is simply more important than noise. For that reason, we decided to do our liquid cooling testing twice: once with the fans at 5V and once at 12V.

Remember that we are doing our testing to serve two purposes: to see how well the chassis cools and to determine the ideal fan/cooler configuration for our test system. Since installing the radiators on the top and front of this chassis means that the only available fan mounts are on the rear and side of the chassis, there are actually only a few different configurations we can test. Still, there is quite a bit to be learned from our results. 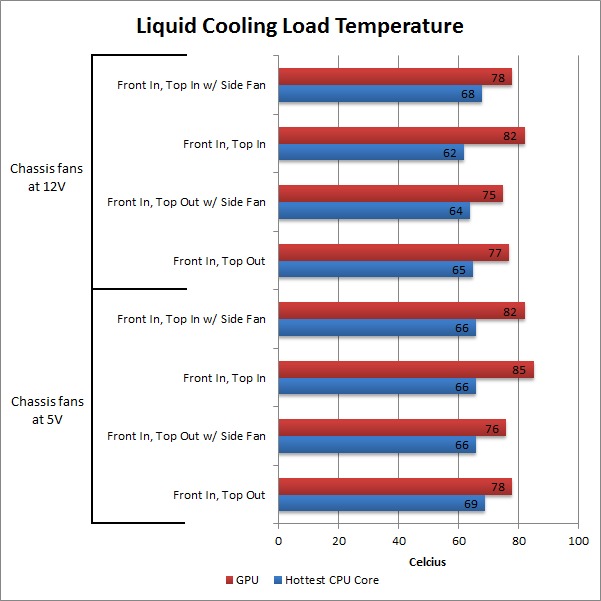 When you are have the chassis fans set to 5V, the way we would recommend configuring the system is with the front radiator as an intake, and the top as an exhaust. You get a slightly higher CPU temperatures this way than you would if you had both radiators as intakes, but the GPU temperature drops by a huge 7 °C. And honestly, the difference between 69 °C and 66 °C on a CPUs is nowhere near as important as the difference between 85 °C and 78°C on the video card.

If you need a bit more cooling, you can also install one of the two (now) extra fans that came with the chassis onto the side panel. This configuration gives you the absolute best cooling out of the four we tested, and can be further improved by turning the chassis fans up to either 7V or 12V.

So far, our testing has shown that this chassis works great with closed-loop liquid coolers like the Corsair H100. Since this is a great way to cool high wattage CPUs, we decided to tune our air cooler testing more towards quiet operation with medium and low wattage CPUs. At Puget Systems, we are very experienced in making computers quiet, and one of the things we have learned over the years is that properly configured cooling is as important, if not more important than adding acoustic dampening materials. The better cooled the components are, the slower the fans have to spin and since the fans are usually one of the loudest components in a computer, even a small reduction in RPMs can result in a noticeable drop in noise.

Because of how many different fan locations there are on this chassis and the fact that we are using a dual CPU system for our testing, we did very extensive testing with the CPU coolers and chassis fans in various different locations and orientations in order to find the exact configuration that cools the best. Some of these configurations may even seem a bit silly like having both CPU coolers in a dual CPU system pointing towards the center of the chassis, but we learn something from each and every test we perform. Often, one little thing can cause a very dramatic difference in cooling, and often those small things are ones that you would never even suspect. 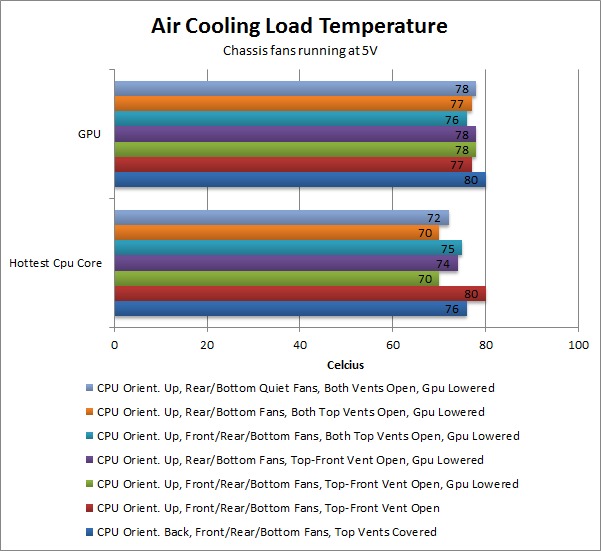 Out of all our testing, there are two configurations that stand out as the best in terms of cooling. Both of these configurations are with the CPU coolers oriented to point straight upwards and have the GPU dropped down to the second PCI-E x16 slot. We found that orienting the CPU coolers this way works really well since it stops the second CPU cooler from using the "recycled" air from the first CPU cooler. The downside is that you are then sucking hot air from the top of the video card, although that is remedied by dropping the GPU down to the second PCI-E x16 slot.

What is really interesting is the relation between the top fan covers and the front fan. When we did not have the front fan installed, we saw the best temperatures with both of the top vent covers removed. Oddly, when we added the front fan, we saw much better CPU temperatures (up to a 5 °C drop) with only the top-front vent cover removed then when we had both covers removed. This is strange behavior, but is a great example of why we test so many different configurations. You would assume that opening the second vent cover would result in lower temperatures regardless of if you have a front fan installed, but our testing shows that this is not always the case.

The other thing to point out is how the temperatures only went up by about 2 °C when we used our quiet Scythe Slip Stream 800RPM fans. These are excellent fans, but they provide only minimal amounts of airflow so in some chassis they are not the best choice. Users that are looking for the quietest system possible will almost always accept a small 2 °C increase in temperatures for the quieter fans, which makes these fans a great choice then quiet operation is a primary goal.

To sum up this section, for quiet operation of systems similar to our test system we recommend orienting the CPU coolers upwards and moving the GPU down to the second PCI-E X16 slot. Then, if you are using a front fan (to cool hot hard drives), you should remove only the top-front vent cover. If you are not using a front fan, then you should remove both of the top vent covers. Properly configuring these vents results in as much as a 6 °C drop in the maximum CPU temperature and a 2-3 °C drop in the GPU temperature.

After working with the chassis, we can confidently state that this is our new go-to chassis for both EATX desktop systems and systems that require exceptional cooling. Properly configured, this chassis can easily cool the hottest hardware available, or can help keep your system running as quiet as possible.

If you want to use liquid cooling, you can fit a ton of radiators without the need for any case modding whatsoever. The result is exceptional cooling that is as easy to install as is possible with liquid cooling. On the other hand, if you decide that you want to make a quiet system the Define XL R2 has you covered with the included quiet fans (with an easy to use fan speed switch), fan covers for unused fan mounts, front door and pre-installed acoustic dampening material on the side panels. Either route you go, working in this chassis is very easy and comfortable. Nothing seems to interfere with anything else even though there are many components (like the hard drive cages) that can be configured in multiple ways.

There were some issues with this chassis, but the damage to the front door that was caused by opening the door fully is the only one that we would deem a true problem. The rest are really closer to little pet peeves that slightly bug us than full-blown problems. After working extensively with this chassis, we are confident that we will soon be offering the Define XL R2 to our customers. Look for changes in our product line in the near future to take advantage of everything this chassis has to offer.