Skip to content
Always look at the date when you read an article. Some of the content in this article is most likely out of date, as it was written on November 20, 2018. For newer information, see our more recent articles.

Pix4D is an advanced photogrammetry application, suited to a wide range of uses, with a focus on handling images captured by drone cameras. Processing of those images into point clouds and 3D meshes / textures is time-consuming, making heavy use of both the central processing unit (CPU) and graphics processor (GPU / video card) in a computer. Since NVIDIA recently updated their GeForce GPU line, and Pix4D released a new version of their software, we thought it was a good time to test out several different video cards to see how they perform in Pix4D. We also tested multi-GPU configurations, to see if using a pair of cards would help in Pix4D, which you can see here.

The CPU platform we tested these video cards on was Intel's X299, with one of the top-end processors it supports. This isn't the absolutely fastest CPU for Pix4D, as we discovered during processor testing we were doing concurrently, but it is fast enough to let us see the difference in performance provided by various GPUs. Speaking of which, we included the full line of NVIDIA's new GeForce RTX cards in this test, along with several of the previous generation GTX cards and the top-end Titan V.

In order to be able to test multiple image sets with multiple iterations, we put together an AutoIt script that runs Pix4D without manual input. Because of the automation we used, all steps were performed back-to-back with no editing in-between to clean up point clouds. That means these results may not perfectly match up with what you'd see when using Pix4D in a real-world workflow, but it removes any chance of human error altering results between runs. We did still observe small variances on total processing time with each image set, so we ran them three times and selected the fastest result (lowest time) for each image set to be included in the charts below.

Here is information about the image sets we used, including project type (3D Model vs 3D Map), listed in order of complexity:

Here are the results for total processing time on each of the four image sets, across all of the tested GPUs. The new GeForce RTX models are shown in a dark shade of green, to make them easy to spot, with the previous-generation cards in lighter green: 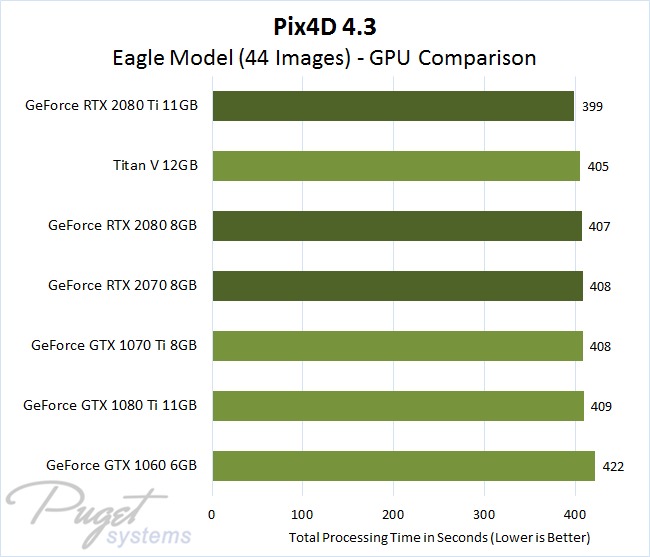 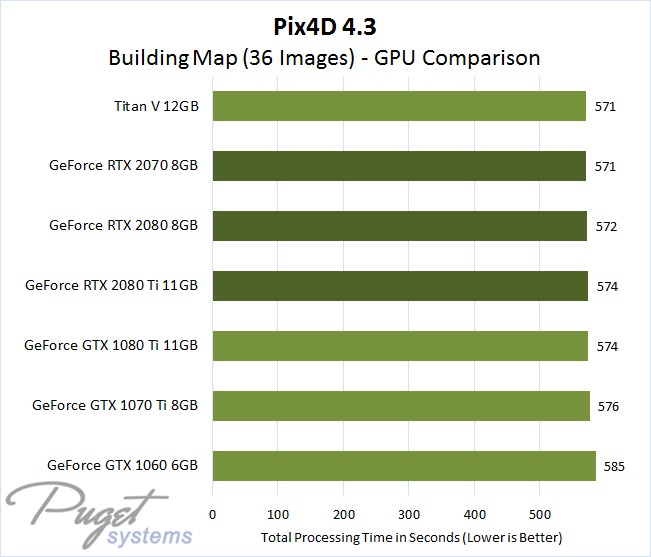 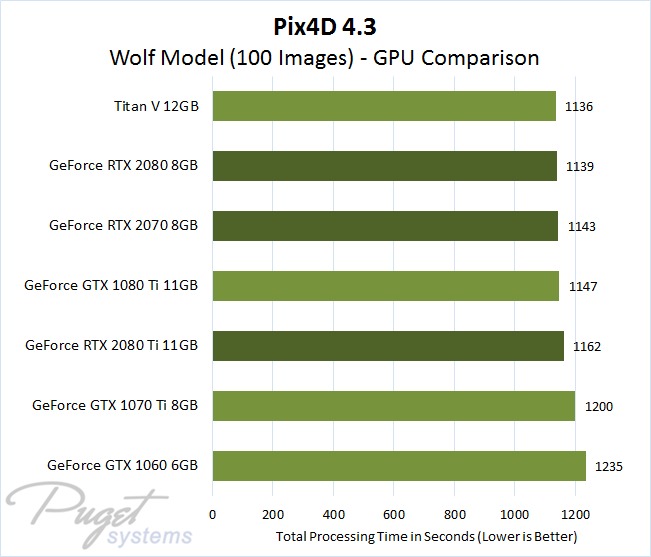 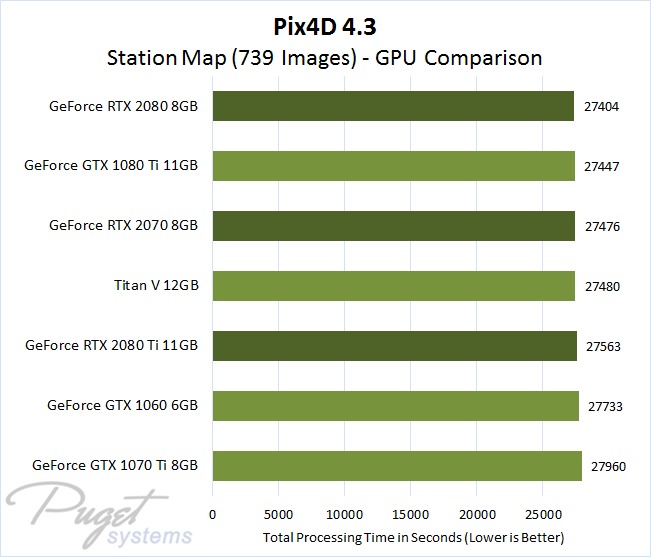 As these graphs demonstrate, there is not a big impact on overall Pix4D performance from the video card. The total processing time only varies between 2 and 8% from the fastest to slowest card, depending on the image set and processing mode (map vs model).

This is due to the fact that the video card is mostly used in Step 1 of Pix4D's calculations, and while that can be a sizable portion of the processing time for models it is much smaller when doing maps (since there are additional steps not present when working on models). Additionally, some of the cards perform so closely to each other that their Step 1 times are basically the same – within margin of error. You can see that better in the raw data chart below, which shows the times for individual steps on each video card and project:

Pix4D's use of the video card is small enough that even a mid-range card like the GeForce GTX 1060 isn't a bad choice, but within the current line of GeForce RTX cards, our recommendation would be to go with the RTX 2070. It is measurably faster than the older 1060 and 1070 Ti, and cheaper than the older 1080 Ti and current 2080 models – which were never more than a few seconds faster.