Skip to content
Always look at the date when you read an article. Some of the content in this article is most likely out of date, as it was written on November 6, 2018. For newer information, see our more recent articles.

Recently, a new version of Pix4D was released – right when we were in the middle of testing new CPUs and video cards. If there was no change in performance it would have made things easy, as we could have simply continued to test the older version and published that data… but it turns out that Pix4D 4.3 has substantial improvements in speed, on average, compared to 4.2!

To compare processing speed across these two versions of Pix4D, we needed to use the same CPU and video card. Based on past testing we went with Intel's Core i9 7980XE as one of the fastest processors for this application, and since we were in the middle of testing the new GeForce RTX series of video cards we opted to use the RTX 2080 8GB for the GPU. We also included 128GB of memory and a Samsung 960 Pro SSD, to ensure that those components were not going to slow anything down. If you want to see full details, with links to the various part pages, click here to expand a comprehensive hardware list.

Without further ado, here are the results for total processing time on each of these image sets, showing Pix4D 4.3's speed-up vs 4.2: 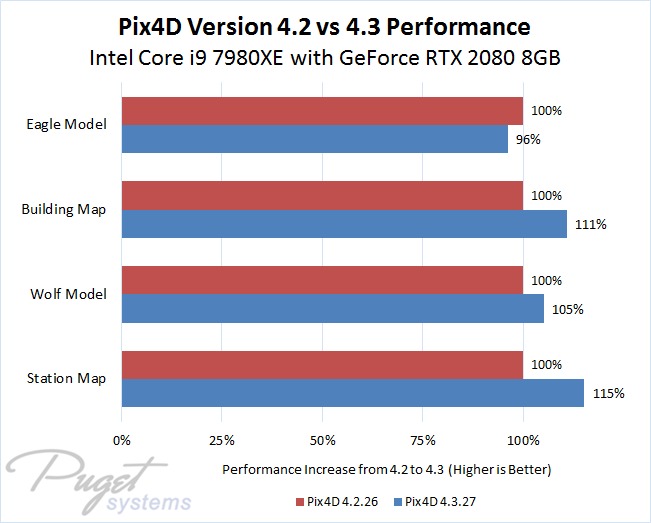 And for those who want to see more detail, here is a chart showing the seconds taken for each step in processing these image sets. Green highlighting shows the areas where 4.3 is faster than 4.2, by 3% or more, with red highlighting the few places where it is slower: 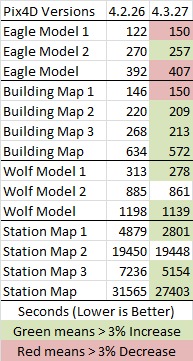 Pix4D 4.3 is, on the whole, a solid improvement in performance compared to version 4.2. The difference is most noticeable with larger image sets, and with maps as opposed to models. In some specific cases, particularly with models based on small image sets, it is a tiny bit slower – particularly during Initial Processing (Step 1). Unless you work exclusively with small image sets, 4.3 is a nice upgrade.

Now that we know Pix4D 4.3 is faster, we are moving forward with testing the latest CPUs and GPUs in this new version of Pix4D. Stay tuned to our articles page, or our Twitter and Facebook feeds, to see when those performance comparisons are published.