This post presents scientific application performance testing on the new AMD Ryzen 7950X. I am impressed! Seven applications that are heavy parallel numerical compute workloads were tested. The 7950X outperformed the Ryzen 5950X by as much as 25-40%. For some of the applications it provided nearly 50% of the performance of the much larger and more expensive Threadripper Pro 5995WX 64-core processor. That's remarkable for a $700 CPU! The Ryzen 7950X is not in the same platform class as the Tr Pro but it is a respectable, budget friendly, numerical computing processor.

The Ryzen 7950X is using the Zen4 cores and the 5950X and Tr Pro 5995WX are using Zen3. I created docker containers with applications compiled from source that were optimized for Zen3 using AMD compilers and libraries. The currently available AMD compilers (also gcc) do not have Zen4 specific optimization paths. This is significant since the Ryzen 7000 CPUs have AVX512 vector units that have not been exploited by builds used in this testing. That means that Ryzen 7000 performance will only get better once compilers with full Zen4 support are available. I will be watching out for the new compiler releases and will re-optimize the applications and write up the results.

The Motherboard used during this testing had "auto-overclocking" features enabled by default.

I redid the testing with these features disabled. About have the results were unaffected and a few were degraded. The worst was approx. 9%

Results were mixed some actually faster and some slower with out the auto-overclock. [ old-result "to" new-result ]

This testing is the first use of a (large) project I'm working on. I'm creating optimized application containers targeted to specific hardware platforms. AMD, Intel, and NVIDIA GPU. The applications used in this post are built from source using AMD AOCC compilers and AOCL libraries. I'm using a package build tool called "spack" for managing the build process and templates for multi-stage Dockerfiles. These containers will be available to the public on Docker Hub in the near future. All containers will have full application builds and include easy to use benchmark code. Full specification for the container builds will be hosted on GitHub. This is a long term project. I plan to maintain the container builds and automate the process as much as possible. In a few weeks I'll be writing posts on how this is being done.

The following charts show the excellent numerical performance of the Ryzen 7950X in relation to the previous generation 5950X and current high-end Threadripper Pro 5995WX 64-core.

There are Spack specs listed that were used in the application build process and benchmark job execution lines from benchmark code for each package.

Note on GROMACS: I would have had gromacs benchmarks in this post but I had a mistake in my testing code. Gromacs writes result output on stderr rather than stdout. I only captured stdout, so no results, and I didn't catch the problem until analyzing the performance data. 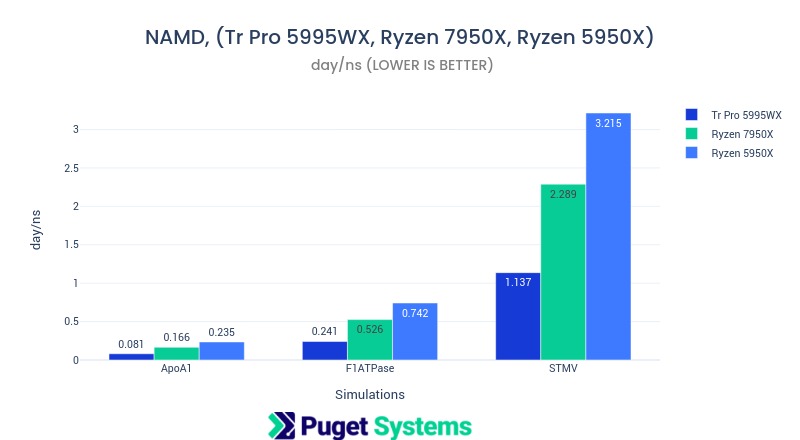 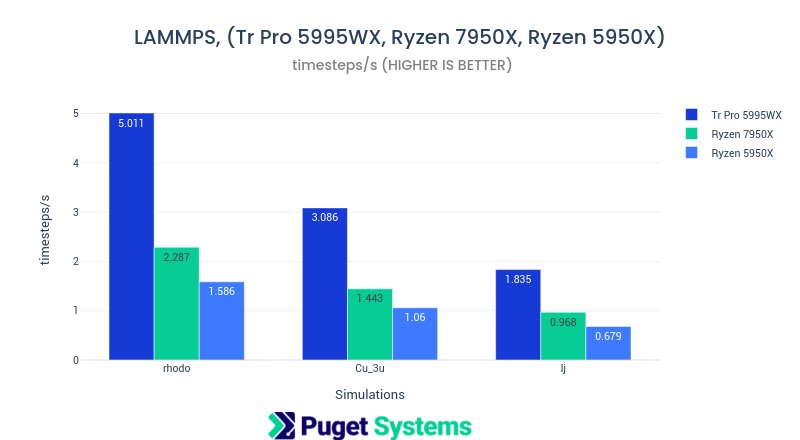 Customize your own desktop computer from scratch. You’re choosing from the best, because we only sell products we recommend and stand behind.

Let us save you money! Work with our experts to find the best choices for your needs and your budget, to give you the best bang for your buck.

Place your order on our secure website. Buy a PC with complete confidence from our case studies and testimonials.

Follow your order in real-time through our extensive checklist, and receive a tracking number by email. Most orders ship in 2 weeks.