OK, yes, I really wanted to say "A peak at the Peak Mini Tesla edition". I resisted! (sort of)

I'm finally getting to spend time with NVIDIA Tesla again. Puget Systems has recently become a "Tesla Preferred Partner" and we are very excited to be offering Tesla as an option to provide accelerated computing on systems in our Peak line.

I personally have a long history with computing on NVIDIA hardware. This dates back to the mid 2000's and trying to code up matrix multiplies using "shader language" on GeForce 8800 series video cards. Really! When the GeForce 200 series cards plus CUDA ( Compute Unified Device Architecture ) became available everyone knew NVIDIA was on to something. There was lots of programming activity and NVIDIA did a fantastic job of nurturing this ecosystem around CUDA. The early Tesla C870 and then especially the C1060 gave early developers a stable** platform for running their accelerated codes in production. NVIDIA has been continuously improving Tesla and the CUDA platform for several years now. The "real world" result has been well over 200 nicely accelerated, useful, and important applications. I have been involved with computing on NVIDIA hardware in one way or another since the beginning but I've been away from it for the past couple of years and there has been significant developments. There's new hardware (the "K" series), new features in CUDA, lots of new accelerated libraries, and The Portland Group, (PGI),has been busy incorporating new features and tools for working with accelerators into their development tools. I'm particularly interested to try working with openACC on Tesla. Hopefully we will see even more innovation from PGI now that they are a subsidiary of NVIDIA.

**Note: The stability I'm referring to with Tesla above, is due to the fact that Tesla is designed to hold up under heavy compute load for extended periods of time. I've been responsible for the demise of several GeForce cards that were pushed too hard for too long. ( I just assume they got too hot and lost their "magic smoke":-)

The kind folks over at NVIDIA have sent us a couple of Tesla K40's for testing and system validation and I'm waiting on a license key for PGI Workstation. Of course the first system I've dropped a Tesla into is the Peak Mini. Here's a couple of photos (lousy ones, taken with my cell phone in bad light). I put a Tesla K40 in a Peak Mini and popped it into it's carrying bag and sneaked it out of the office so I could spend some quality time at home this weekend with the K40! Also, as a hopeful teaser, we have been encouraging (and been encouraged by) NVIDIA regarding a very nice "starter kit" for newly registered Tesla developers that would encourage a new round of developers who may have been reluctant to dive into the CUDA waters in the past. With new hardware, programming tools and libraries in hand those developers may find the waters much more inviting these days! 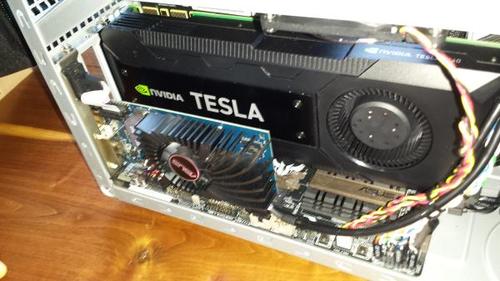 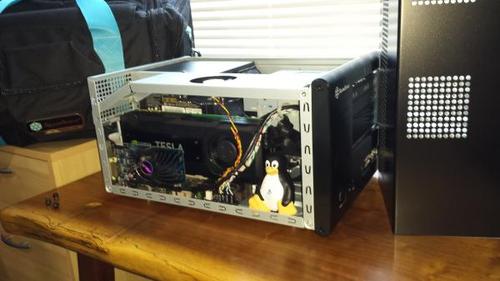