Docker is a great Workstation tool. It is mostly used for command-line application or servers but, … What if you want to run an application in a container, AND, use an X Window GUI with it? What if you are doing development work with CUDA and are including OpenGL graphic visualization along with it? You CAN do that!

NVIDIA-docker2 is deprecated. I have a setup post for the new nvidia-container-toolkit

This older post will still likely have some good information in it but PLEASE see the link above for a new setup guide.

A colleague recently ask me about building a CUDA application with OpenGL support in an nvidia-docker2 container. I tried to do it and ran into difficulty. A lot of reading and experimenting followed. I was able to get it all working nicely.

This post is a guide to working with OpenGL and X-Window applications from a docker container running on a Workstation with the NVIDIA runtime.

Setting up Docker and NVIDIA-docker2 on your Workstation (references)

Docker together with the NVIDIA "runtime" (nvidia-docker) is very useful for starting up various applications and environments without having to do direct installs on your system. Setting up docker and nvidia-docker is one of the first things I do after an install on a Linux workstation.

I have written many posts about using docker and nvidia-docker. If you go to the Puget Systems HPC Blog and search for "docker" you will find nearly 70 posts! The top posts should be How-To's and Guides. The most recent install and setup post about docker and nvidia-docker was How To Install Docker and NVIDIA-Docker on Ubuntu 19.04. That guide is concise and equally applicable to Ubuntu 18.04 (recommended). It also contains references to other posts that will give you more detailed information if you want to dig deeper.

For what follows I assume you have docker and the nvidia-docker runtime installed and configured on your Workstation.

Command Line arguments needed for X and OpenGL with NVIDIA-docker2

There are 4 extra docker "run" arguments that are needed to use your X Window display and OpenGL with nvidia-docker2,

Lets go through this command-line in some detail.

First part is my normal start-up for a nvidia-docker2 container,

If you have read any of my TensorFlow GPU testing posts you have probably seen that before. That is just starting "docker run" with,

Second part, is needed for an X Window and OpenGL display when running a program in an nvidia-docker2 container,

The next 3 items are environment variables to be set in the container.

Here is a list of values that can be assigned to NVIDIA_DRIVER_CAPABILITIES,

This option controls which driver libraries/binaries will be mounted inside the container.

Example: Compile “nbody” from the CUDA Samples using an NVIDIA CUDA docker image and run it with OpenGL display

One of the first things I do to check a CUDA set-up is to compile the (optional) "Samples" code. There is a great selection of sample code for various features/aspects of CUDA programming. A favorite is the "nbody" sample. I'll do a build of that code using a docker container from the NVIDIA repository on DockerHub using the nvidia-docker runtime. This nbody code has a nifty OpenGL display that looks like a "big-bang" star formation.

Get the CUDA samples for the latest version of CUDA

Go to the NVIDIA CUDA download page and click the buttons until you get to your distribution i.e. Linux – x86_64 – Ubuntu – 18.04 – runfile(local). You can download the .run file from your browser or left click on the Download button and copy the location and then use wget,

(That was the current version when I wrote this post.)

We will only install the Samples from this, NOT the CUDA ToolKit!

I have the .run script installing the sample directory into the "projects" directory in my home directory. You should now have a directory named "NVIDIA_CUDA-10.1_Samples". There is lot of good stuff in there! … and you can compile it from a docker container.

That is the full command-line, see the previous section for a description. That container is maintained by NVIDIA and the default "tag" is "latest" so it should be in sync with what is available on the CUDA download page.

Install the dependencies for OpenGL

The container you started above will be a base Ubuntu 16.04 with CUDA 10.1 ToolKit and Tools installed. From the container command prompt cd to the nbody source directory and type "make"

Run nbody and marvel at the spectacle of a wonderful OpenGL CUDA application running on your display from a docker container! 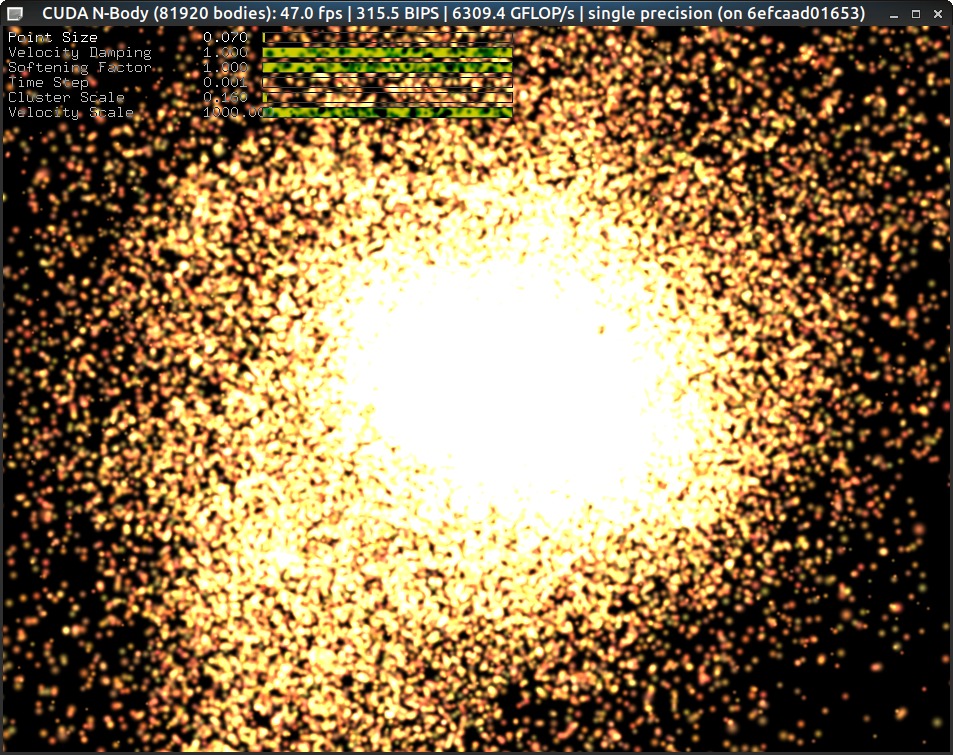