Like most software developers, Agisoft maintains a list of system requirements for Metashape that can be used to help ensure the hardware in your system will work with their software. However, most "system requirements" lists tend to cover only the very basics of what hardware is needed to run the software, not what hardware will actually give the best performance. In addition, sometimes these lists can be outdated, list old hardware revisions, or simply outright show sub-optimal hardware.

Agisoft has done a better job with their list of system requirements than most, but we have also put together our own benchmark for Metashape and taken the time to perform testing to determine what hardware runs the best. Based on that, we have come up with our own recommended hardware list - as well as specific configurations tailored with this advice in mind.

Each step in the Metashape workflow utilizes the CPU differently - some depending only on clock speed, others favoring more cores, but as of Metashape 1.7.2 it seems that extremely high core count processors are not well suited to this application. More mainstream processors from both Intel and AMD do well, but for its price one processor currently stands out as the best choice:

Another thing worth mentioning here is that there is a setting in the Metashape Preferences which we have found to usually lower performance and sometimes lead to crashes. We have a full article about it, linked to below, but the short story is that you will want to visit Tools -> Preferences -> GPU whenever you install or update Metashape. There, make sure that all your GPUs are selected and that the option to use the CPU during GPU processing is disabled (un-checked). As backwards as it may seem that improved performance slightly on average, in our testing, though you can always run your own tests with it both ways to see how your specific hardware fares.

While the CPU impacts almost every step in Metashape, some parts of the workflow are GPU-accelerated as well. Most notably, aligning photos and building depth maps - as well as the mesh, if using depth maps as the source - are all impacted by the speed of your video card. Multiple video cards can also help boost performance in some projects, especially when using depth maps heavily.

We recommend using NVIDIA GeForce video cards rather than Quadro cards. There is no specific benefit to using 'professional-grade' Quadro series cards in Metashape, and they cost far more than the mainstream GeForce models for similar levels of performance. Quadro cards sometimes have more video memory than their GeForce counterparts, but the amount of video memory was not found to be an important factor in our testing. Given the cost of a whole system that is oriented toward Metashape, and how critical GPU performance is, the higher-end (and thus faster) GeForce cards are usually most worthwhile.

Moreover, we do not currently recommend AMD Radeon cards for Metashape. The latest Radeon RX 6000 Series performs better than having no GPU at all, but is far behind competing NVIDIA GeForce models. We also encountered stability issues with Metashape when running our benchmark on some older AMD graphics cards.

Agisoft publishes a great document on memory requirements, based on three criteria:

All you really need to know is how many photographs you will be working with and the megapixels (MP) of those photos, plus the quality settings you want to use within the application. Their document is based around 12MP images, but as the RAM usage in Metashape is roughly linear, you simply need to adjust the recommended RAM to your resolution of photos you work with. For example, if you use 6MP photographs you will need approximately half the amount of RAM they recommend on that chart. Likewise, if you use 50MP images you will need four times the amount of RAM they show.

One suggestion we always make is to consider what you will be doing in the future. For example, if you think you will be increasing the resolution of your photographs or increasing the number of photos you work with then we highly recommend taking that into account when deciding on how much RAM you need. If anything go a little over to ensure that you never run too low on memory. That can have a huge, negative impact on performance!

With the falling costs associated with SSDs, we almost always recommend using an SSD for the primary drive that will host your OS and the installation of Metashape. The high speed of SSDs allows your system to boot, launch applications, and load files many times faster than any traditional hard drive. If your budget allows, it is also a very good idea to have a second SSD that can be used to store any projects you are actively working on.

One important factor we want to point out is that with the higher performance of modern platter drives means that you will not see a decrease in the time it takes to open, save or export a model by using a SSD. SSDs are great for improving the time it takes to copy or move around files, but for actually working with files in Metashape our testing (as shown in this chart) shows almost no performance difference between using a platter drive, an SSD, or even an ultra-fast PCI-E based NVMe drive. 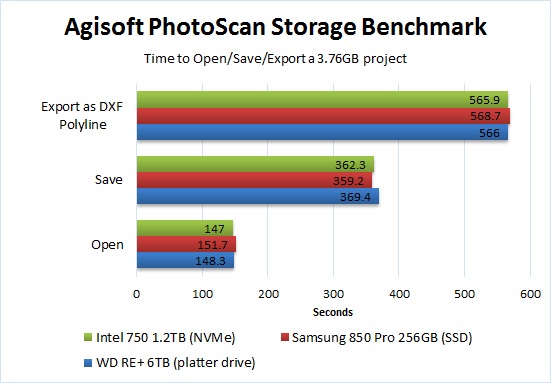 Still, a fast drive will have a lot of other benefits for Windows and application performance - and having the OS / programs separate from your working files is a good approach in general. As such, we generally recommend a three hard drive configuration. For your primary drive a solid-state drive (SSD) is highly recommended as it will greatly improve how fast the OS and programs startup. A secondary SSD is great for your active projects, and the size of this drive will depend on how many images you have per project and how many projects you work on at a time. For long term storage, where the high speed of SSDs is typically not required, a larger traditional hard drive is a good choice as they are still much cheaper per GB than SSDs.

If your budget does not allow for three drives, the primary and secondary SSDs can be combined into a single drive if necessary. Alternatively, you could keep your active projects on a hard drive, leaving a single SSD purely for OS and applications, especially if you need a ton of space for your photos.

See which Agisoft Metashape Workstation is right for you!