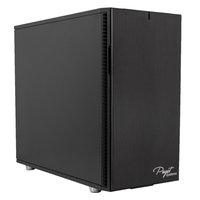 "Both [Puget Systems] workstations had zero downtime or hiccups during the rendering process and stayed cool even under extreme use - days of 100% CPU usage at a time."

- Ryan Thomas, VP of Content and Co-Founder of SubVRsive

"With Puget Systems’ computers, we could physically do something we could not do before. It was not possible to process the amount of imagery we were trying to process [on our old systems]."

Q: Do I need anything special to create VR content?

A: If you are developing for the HTC Vive, Oculus Rift, or any other VR HMD there is actually little in the way of special hardware needed. The only exception is that we typcially recommend using a more powerful GPU if possible. While a card like the GTX 1070 is often considered an entry-level card for VR, for working directly through Unity it pays to use a more powerful card. We recommend at minimum a GTX 1080 GPU if not the more powerful GTX 1080 Ti.

A: Whether you should use a CPU with more cores depends on the tasks you tend to wait on in Unity. Many tasks like opening projects, importing/exporting packages, and viewport FPS are only lightly threaded so having more CPU cores does not improve performance. Other tasks like navmesh, GI baking, and progressing lightmapping are able to utilize a high number of CPU cores. For more information on what CPU you should use, we recommend reading our Unity Hardware Recommendation page.

Q: You only list Core CPUs, don't I need a Xeon CPU for a workstation?

A: In the past, Xeon CPUs were more robust than their Core series counterparts. Today, however, there is very little functional difference between the two Intel product families for workstations. In addition, Xeon CPUs are almost always clocked slightly lower than the Core i7 and i9 CPUs which means that you would be giving up a small amount of performance to gain a set of features that are typically only useful for servers.

Q: You only list NVIDIA GeForce video cards, what about AMD Radeon?

A: AMD Radeon cards give great performance for their cost, but we have found that NVIDIA GeForce cards are much more reliable and stable. In a professional environment where a broken computer means lost time and money, we simply feel that the increased reliability of NVIDIA cards is well worth the small increase in cost.

Q: Should I get multiple video cards (SLI)?

A: In general, we recommend sticking with a single GPU if possible. For the majority of game development, having two video cards in SLI simply introduces additional bugs that can be time-consuming to work out. However, if you intend to have SLI support in your game then having two GPUs in your system can be great from a testing perspective - although we recommend disabling SLI when not doing specific SLI testing.

Q: Do any of your systems support Thunderbolt?

A: Yes! Our Standard Workstation natively supports Thunderbolt 3 which is currently the latest and fastest version of Thunderbolt. Unfortunately, our Compact Workstation does not yet have Thunderbolt support - but we are working on it!

A: The amount of RAM you need is going to depend on your specific project and whether you do RAM-intensive tasks like light baking. However, as a general rule of thumb we recommend 32GB of RAM for most users or 64GB+ if you work with especailly large and complex projects.

Q: Should I use an SSD for my files?

A: Yes! SSDs are much faster than traditional hard drives and in many cases can be noticeably faster than the older style drives. We highly recommend using an SSD (or even one of the newer and faster M.2 NVME drives) for your OS drive as well as a dedicated secondary SSD if possible for your project files.