This weekend, Puget Systems updated many of our preconfigured systems to default to Windows Vista 64-bit. This is in direct response to a dramatic increase in popularity of 64-bit over the last few months. As part of my research in making this call, I took a look at our operating system sales over the last few years. I found the data interesting, so I thought I'd share that data, as well as my thoughts!

Of course, it makes perfect sense that 64-bit operating systems are becoming more popular. With the price of memory constantly dropping over time, we have now reached a point where it is most common for us to sell a new computer with 4GB of memory or more. In fact, we're not too far off from dropping 1GB sticks of memory entirely. Even more, the recent release of Core i7 has encouraged even larger memory configurations. Since Core i7 has three memory channels, memory is installed in sets of three. Not wanting to limit their upgrade potential by populating half their memory slots with 1GB modules, we find that most people are using 6GB memory in the Core i7 systems.

However, there is a force at play against the use of 64-bit: Windows XP! This aging operating system is still a staple with businesses, and home users who are wary to move to an OS they have heard so many negative things about (Windows Vista). If you have decided to stay with Windows XP, you have essentially decided to stay 32-bit. There is a 64-bit version of Windows XP, but driver support is so poor that it is rarely a feasible option.

I've stated before that Windows XP is still going strong. Without further ado, I now bring you the raw data from our sales history: 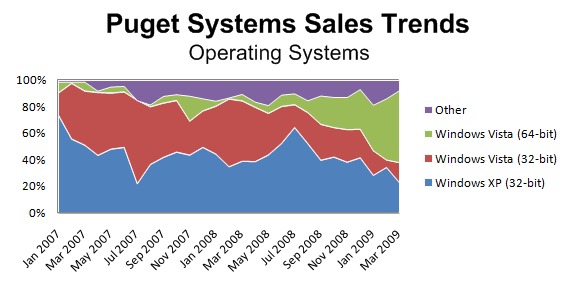 You can see that while Windows XP is slowly decreasing in use over time, the decrease is much less dramatic than you might expect. Soon after the launch of Windows Vista, Windows XP made up about 50% of our operating system sales. Today, it is down only to 30%. I find it particularly interesting that there was a surge in Windows XP usage around the middle of 2008. This correlates to the height of the general public's anti-Vista sentiment, which prompted Microsoft to perform what I thought was a desperate advertising campaign. Named the "Mojave Experiment", its goal was to demonstrate that people simply disliked Windows Vista because that was the public consensus. Micosoft didn't need to worry, however, as this resistance was soon overcome by the sheer need for a 64-bit OS. Its funny to think that the availability of 64-bit drivers is quite possibly the largest factor "forcing" people to adopt Windows Vista.

If we look at only Windows Vista sales, we see a very dramatic change at that same time — the middle of 2008: 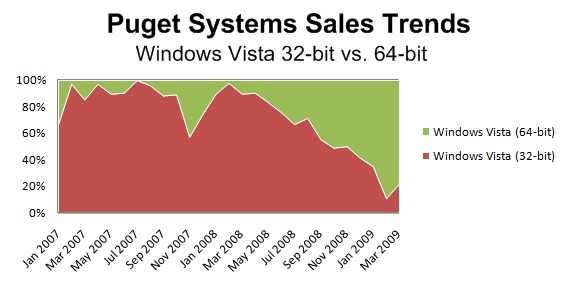 The middle of 2008 is when we started seeing a dramatic movement that started with 32-bit accounting for 80% of our sales, to it only accounting for 20%. I find it very interesting how smooth this transition was. Every month, 64-bit made steady gains. This is what you would expect when the sales are customer-driven. If Puget Systems had been pushing one version over another, you'd see a sudden shift at the time we made an internal company decision. This graph makes me feel really good — its shows that we really are doing our job of educating our customers, and letting them decide!

As we start to look ahead to Windows 7, we have been talking about whether we'll be offering the 32-bit version at all. In the end, its a bit too early to make any call, so we're just going to sit back and see where demand is when the Windows 7 launch gets closer. But if the last year is any indication, the demand for 32-bit looks like it will be all but gone by the time Windows 7 arrives.