Just over a year ago I wrote how Solid State Drives (SSD) were soaring in popularity. At that time we offered a number of SSD models from Intel. But due to production constraints, we were on the verge of adding a few Samsung SSDs to the mix. Around this same time we began fielding a number of requests for Samsung SSDs.

Once considered a luxury item, SSDs have moved into the mainstream within the past two years. Our customers tend to be tech savvy and performance demanding to the core. So I wasn't surprised to find widescale adoption of SSDs as I dove into the sales data.

Let's first take a look at how sales of SSDs have stacked up against traditional drives going back five years. 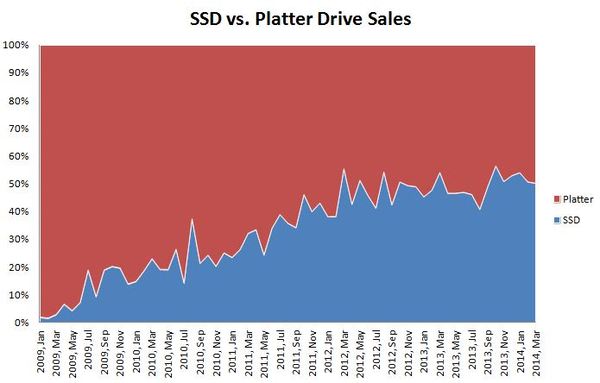 From the beginning of 2009 through 2012 we see a sharp increase in SSD sales at Puget Systems. SSDs were still pricey and storage capacity was limited. Those high prices resulted in many customers purchasing a smallish 80 GB or 120 GB SSD configured as their primary boot drive. But that didn't leave a lot of room or programs and media. So up through 2012, we sold a lot of computers with one SSD and at least one larger capacity traditional drive.

I went back to 2009 to determine our best selling SSDs by each year.

And then I did the same for traditional drives.

So every couple of years we've seen a substantial increase in SSD capacity while our best selling traditional drive has remained at 1 TB going on five years. Comparing actual sales numbers for the above models we can see when our most popular SSD surpassed our most popular traditional drive in sales. 2012 was the year SSDs made their move, much like the third season of Breaking Bad. Or season four of Seinfeld if you're my age. 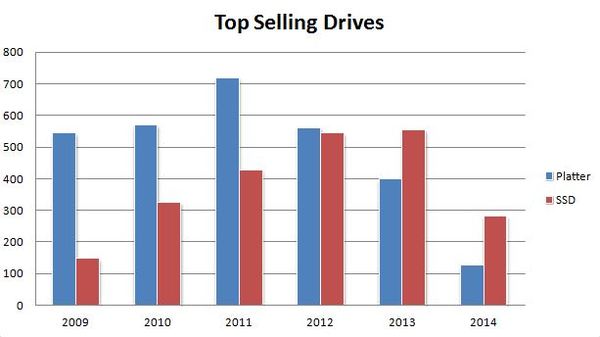 It's clear too that Samsung has knocked Intel off the top of the mountain. In fact, this year our four best selling SSDs are built by Samsung. The chart below shows Samsung's dominance since we began offering their SSDs in January of 2013. 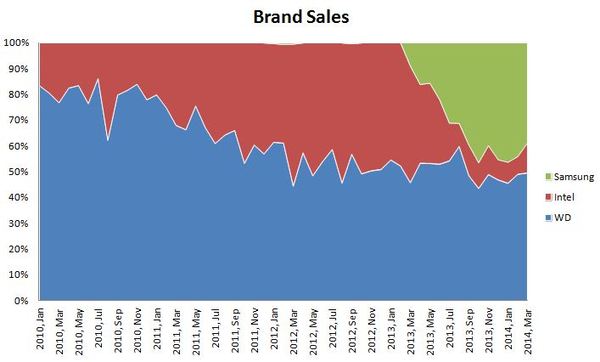 When I worked in sales during 2012, I often had to explain to customers the benefits (fast, reliable, silent) of selecting an SSD over a traditional drive. But today the majority of customers expect their latest PC to come standard with an SSD. Two years ago it was uncommon for us to build a new PC with only an SSD. With increased capacities and lower prices, we now build SSD-only PCs each day.

SSD sales at Puget Systems have settled in at just over 50% of all drives we sell. Given the number of workstations and servers we build for customers with demanding storage needs, we might not see greater SSD penetration unless capacities improve. SSDs top out today at 1 TB which still hold a lot of data. Unless you're rendering 4K video, shoot in RAW or just play a lot of modern PC games. Yes, SSDs are very popular, but we still sell a lot of 1, 2, and 4 TB Western Digital drives.