Pix4D is a photogrammetry application which can take sets of photographs and turn them into point clouds and 3D meshes, to make digital versions of real-world objects or locations. It supports both local processing on a workstation as well as uploading images to be processed in the cloud - but which is faster, and what advantages does each have?

We've done testing recently to find out what the best CPU and GPU are for working with Pix4D on a workstation, so this week I took a couple of the image sets we used in those tests and ran them through Pix4D's cloud processing. I used our smallest and largest 3D Map projects, and then put together a chart showing how long they took to process in the cloud compared to our top-end workstation configuration (an Intel Core i9 7980XE with a GeForce GTX 1080 Ti video card): 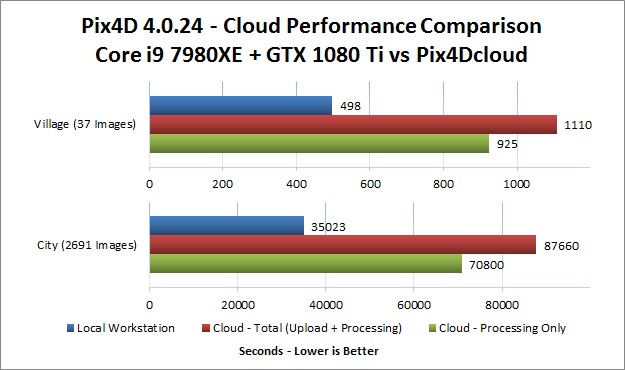 The chart above shows the total time for cloud processing, which includes both the time it took to upload the images as well as the actual calculation time once the upload was complete. I also broke out just the processing time itself, without uploading, since that could vary based on your internet connection. It is entirely possible that calculation time also varies somewhat in the cloud, as servers may be more or less busy during different parts of the day, but I was only able to run each of these once due to time constraints.

What we can see here is that it takes substantially longer to process image sets in the Pix4D cloud compared to doing so on a high-end workstation. Even without the time involved in uploading, these projects took about twice as long to run in the cloud. A more modest PC - something like a Core i7 8700K with a GeForce GTX 1060 - could still complete those tasks faster than the Pix4D cloud service did.

But does that mean cloud processing is pointless for Pix4D? Not necessarily. There are some situations where it could make sense:

At the same time, there are definite downsides to cloud processing - both in Pix4D and other similar applications:

Each method of processing has its benefits, and I am glad that Pix4D supports both! I also hope that this info is helpful for users who are unsure which way to go. If you decide on local processing and want a workstation built for Pix4D, check out our recommended systems.