It has been several years now since the decade that I spent on our consulting team, but I remember frequently being asked about how our pricing compared to that of competitors. That is a very reasonable question to ask when you are considering spending thousands of dollars on a new workstation, and that conversation could go a lot of different ways depending on the type of system in question, the hardware specs, and which other companies the customer was looking at. Here at Puget Systems we certainly aren't always the cheapest option, but I have always believed that we provide a lot of value – from our Labs testing and no-pressure consultations to our in-depth quality control processes and lifetime tech support.

Recently, this topic came up again – but specifically around how our prices on Threadripper PRO based workstations compare to some of the bigger OEMs like Dell and Lenovo. Since AMD just launched the new Threadripper PRO 5000 WX-Series, I thought this would be a great time to go back to my consulting roots and share some real-world comparisons. Dell has announced that they will be carrying these CPUs in new Precision 7865 tower workstations, but as far as I can tell those are not yet listed on their website. Lenovo has been offering them for several weeks, though, so I started there.

As I began researching Lenovo's workstation offerings with AMD Threadripper PRO processors, something jumped out at me. Here is a screenshot of their "ThinkStation P620 Tower Workstation" landing page from July 5th, 2022: 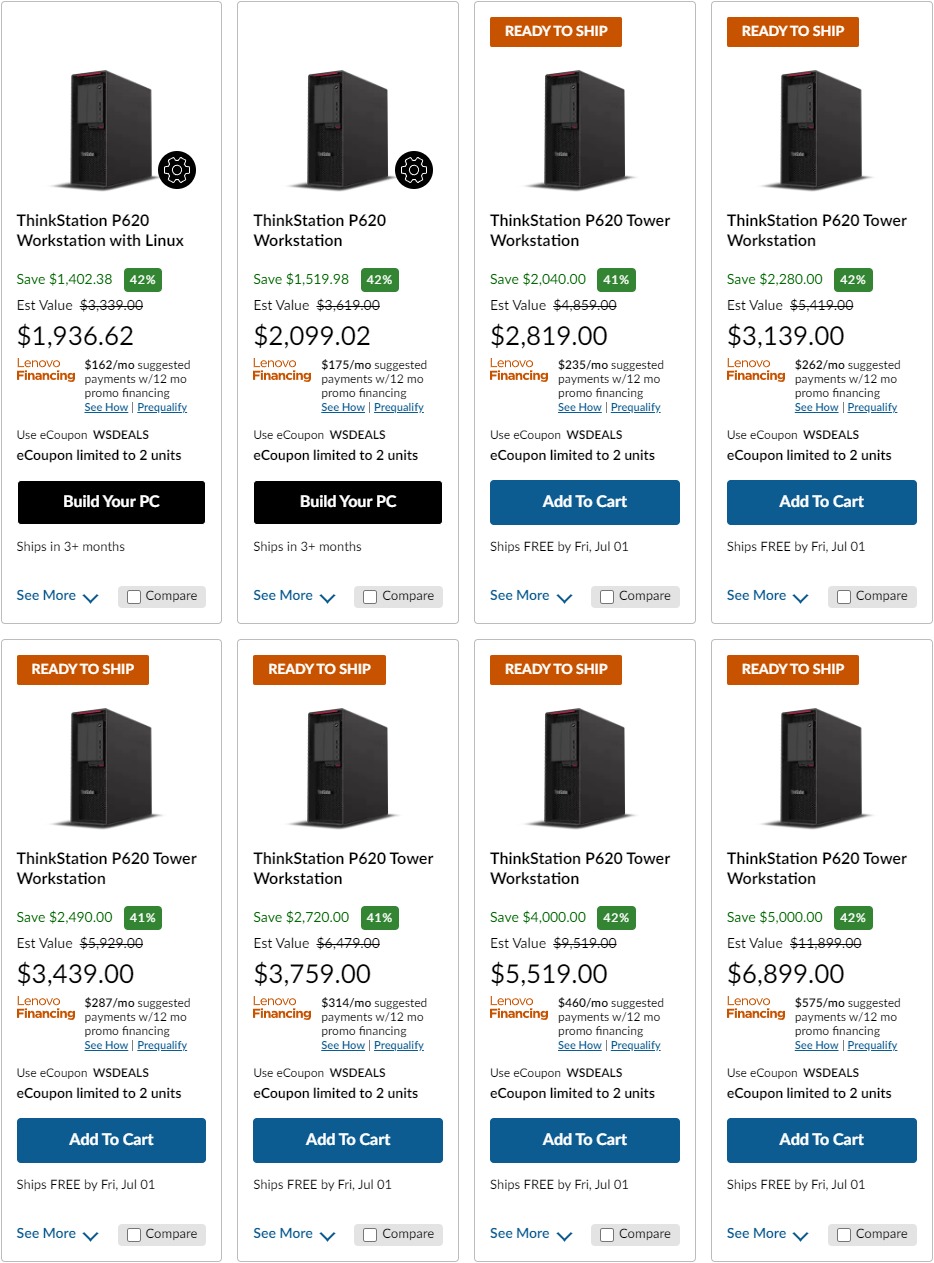 Every one of those options shows a massive 41 to 42% "savings", which is nearly half off what they call "Est Value" – presumably their normal pricing. The first couple systems also have really low starting prices. Let's dig into that some more and see what one of these configurations looks like… starting with second the "Build Your PC" option at the top. 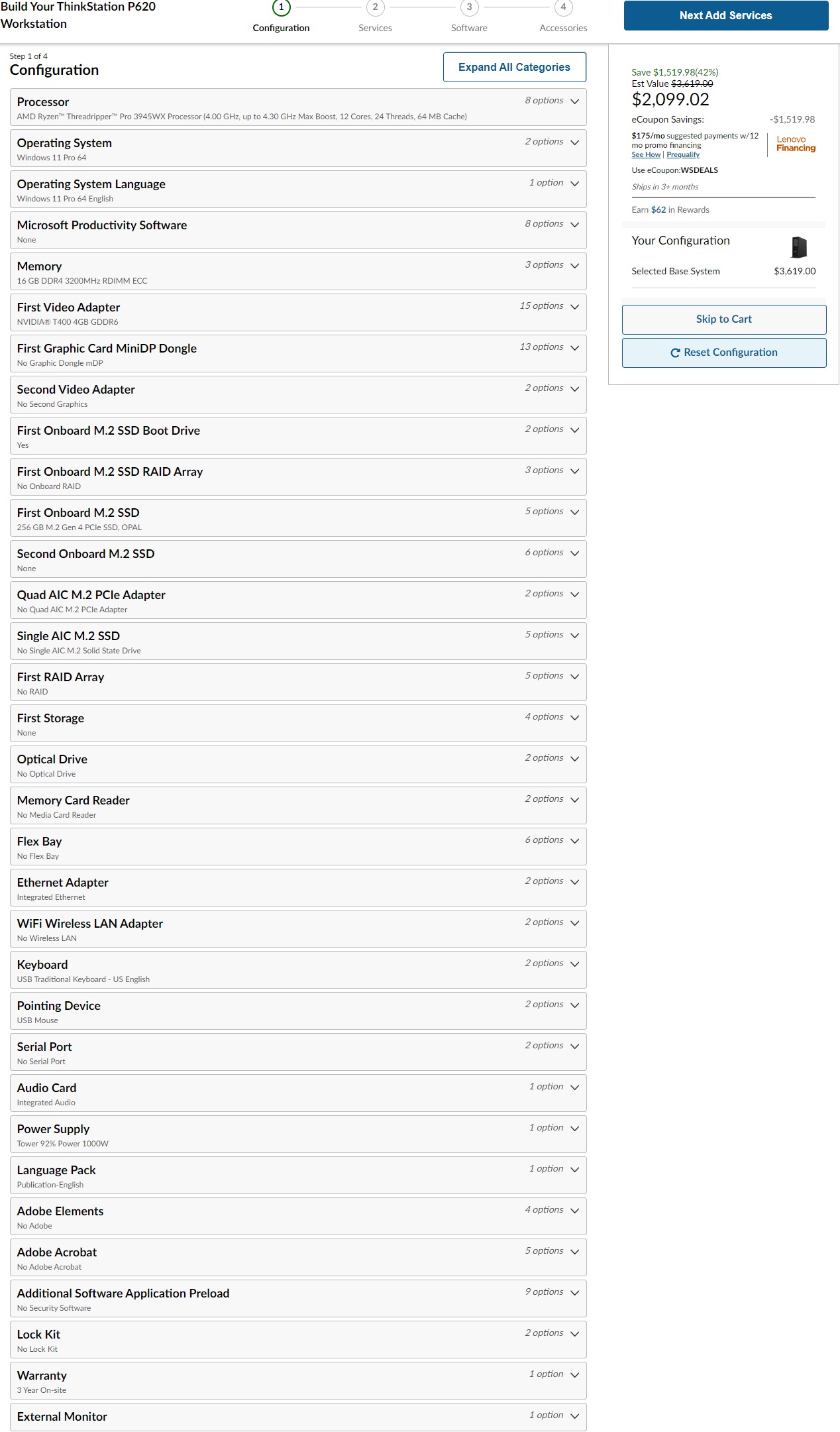 Okay, so it looks like they default to the lowest possible options in every category – including a single stick of RAM, despite this platform supporting eight-channel memory. That would cripple performance in many applications! This is also an older generation CPU (Threadripper PRO 3000 instead of 5000)… so let's bump some of these options up to make a more reasonable, effective workstation. 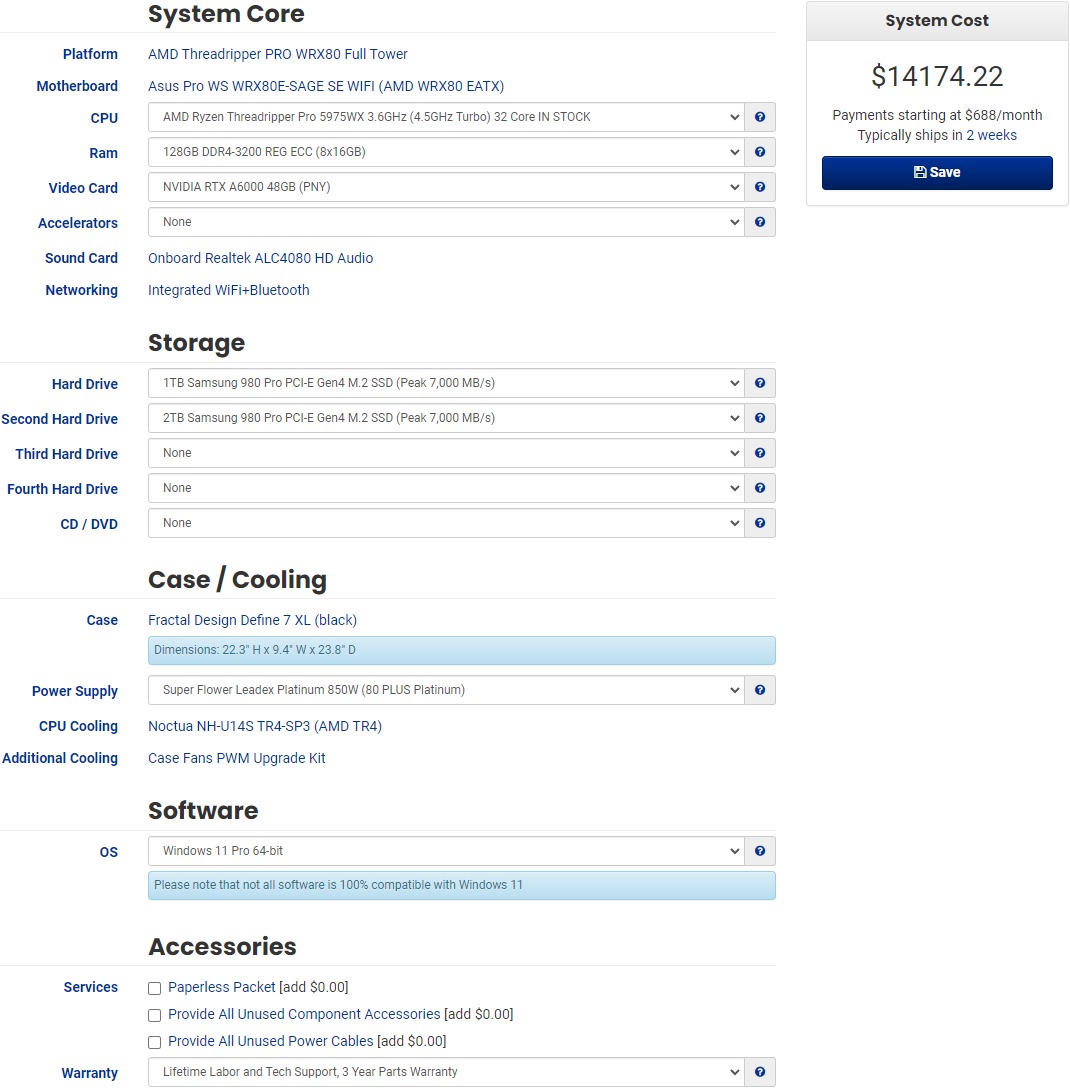 Hmm, that's odd. The same CPU, RAM configuration, GPU, SSD type and capacity on a Puget Systems workstation comes out to $14,174 and some change. No big "sale", no advertised discounts, just our normal price. It's basically the same as Lenovo's, or slightly lower even, despite their "eCoupon Savings". Granted, this is just one specific hardware configuration; I'll dig into further comparisons in a moment.

So what conclusions can I draw at this point? I don’t know exactly how their component costs, or “estimated value”, are calculated – and I won’t go too deep into speculation – but I can say that our system prices seem to match up pretty closely to Lenovo's discounted prices.

In the example I started with above, Puget Systems and Lenovo were basically neck and neck on price – at least, after Lenovo's advertised discounts. What if we step it up, and go for higher-end system specs? Let's double everything: 64 cores, twice the RAM (256GB), dual RTX A6000 video cards, and double the SSD capacity. What does that comparison look like? 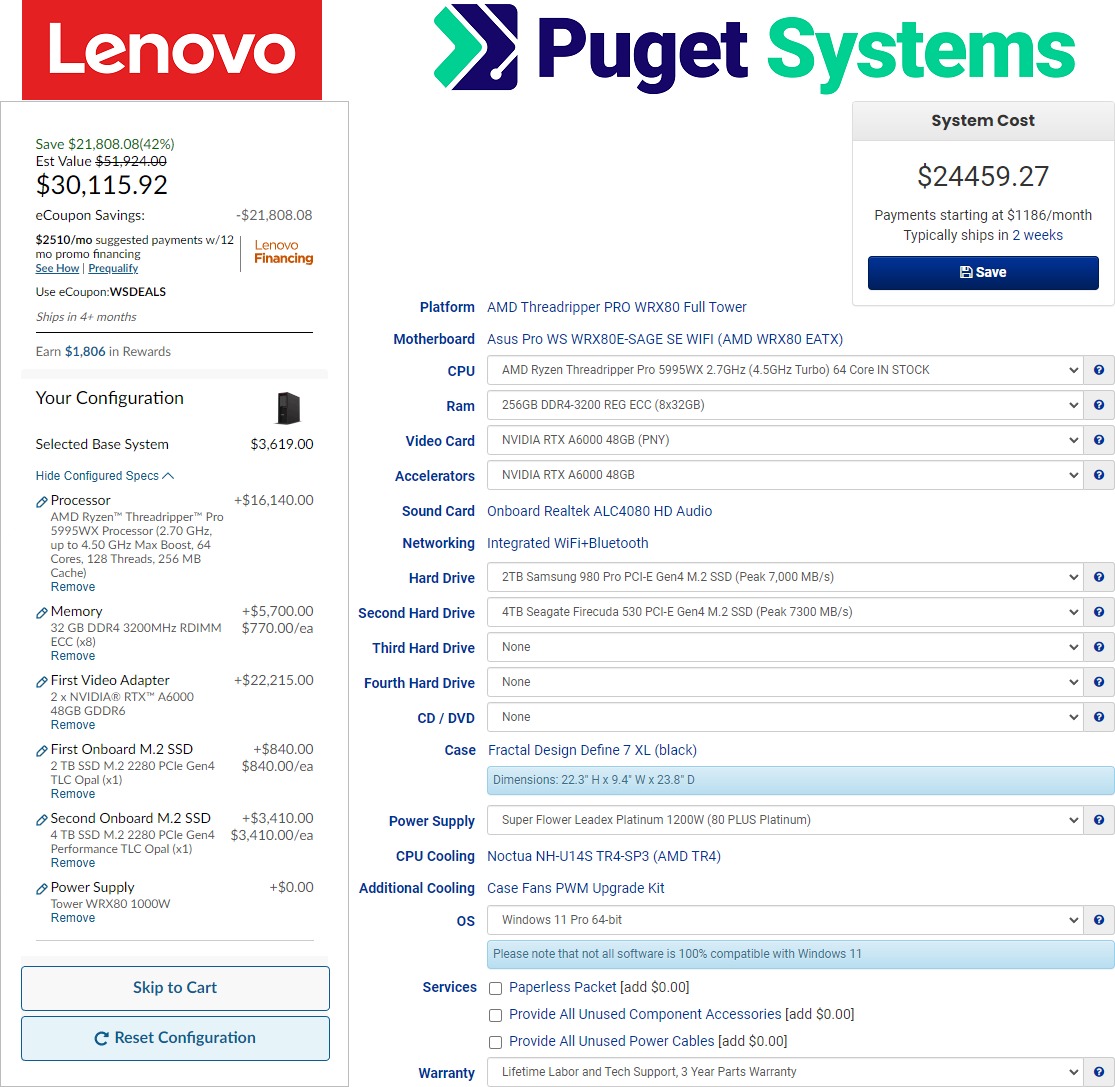 With specs cranked up to a solidly high-end configuration, these workstations begin to rival the price of a new car – but the gap between Puget Systems and Lenovo also widens. Here we are over $5,000 less expensive, even after Lenovo's supposed savings, for a difference of more than 20%! Such an extreme workstation is not for everyone, of course, but for those who are working with virtual production LED walls, cutting-edge machine learning algorithms, and scientific computing Puget Systems is the clear winner on value when it comes to extreme performance.

In the middle, this is the same comparison that was show in the Pricing Philosophy section above – but condensed for easier viewing. 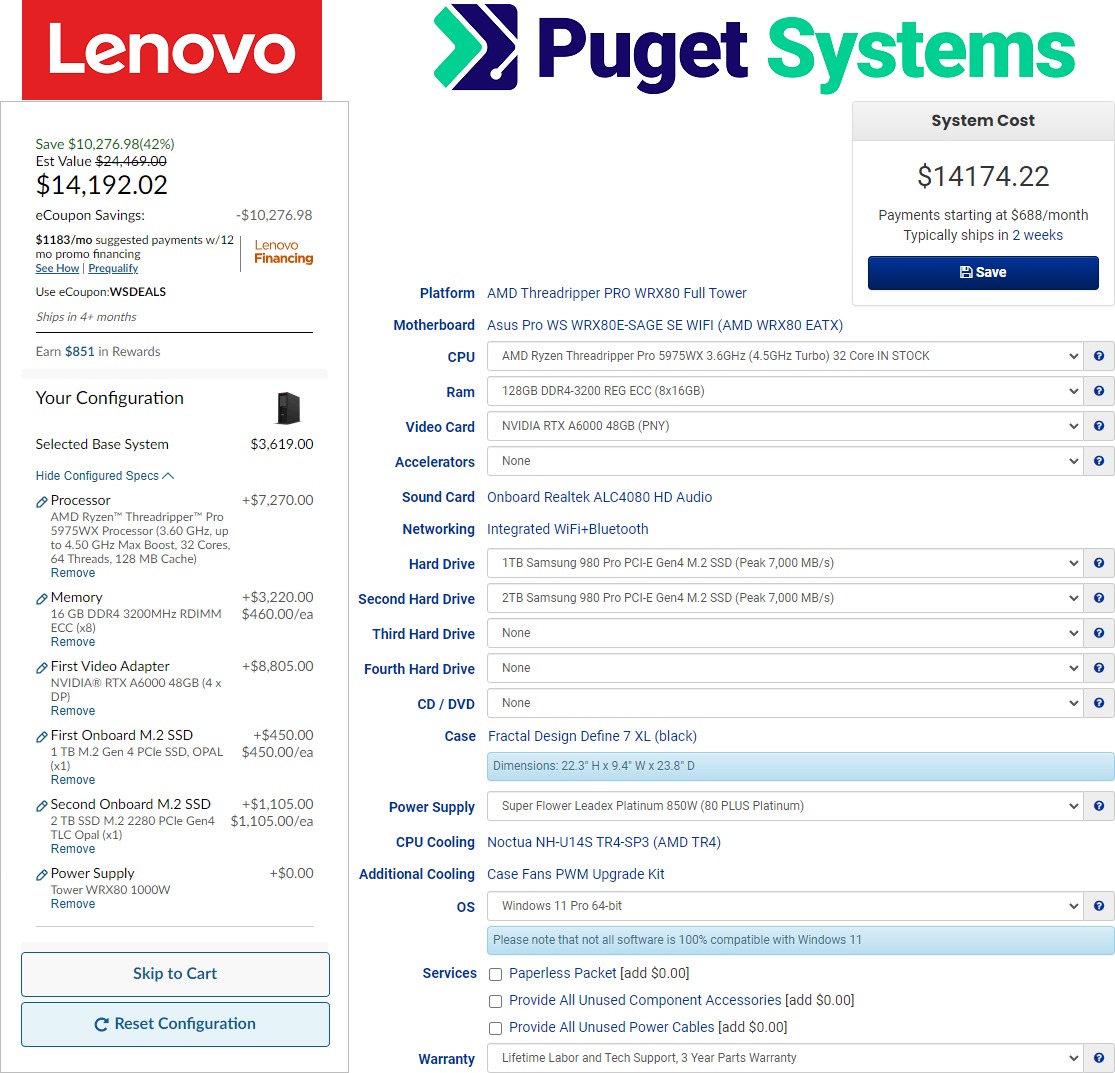 As I discussed above, we are pretty much neck and neck with Lenovo at this configuration level. And this is sort of an inflection point, as we will see: above this, our pricing here at Puget Systems begins to look more and more favorable – but if we slide down to less expensive hardware, it begins to swing slightly in Lenovo's favor. Let's take a look at that.

Terms like "entry-level" and "low end" are relative here, since we are still talking about workstations based on AMD's high-performance Threadripper PRO 5000 WX Series processors. These are in a different class than consumer and business desktops that the vast majority of people use, but within this product family, there are still relative tiers of hardware. For this comparison, I kept the 128GB of memory from above but dropped to the 24-core 5965WX CPU, RTX A2000 12GB video card, and 500GB + 1TB SSD configuration. Normally, when aiming for a lower price point, we would offer things like a GeForce video card and non-ECC memory in our workstations… but since Lenovo lacks those options I stuck with hardware that was available on both configure pages. 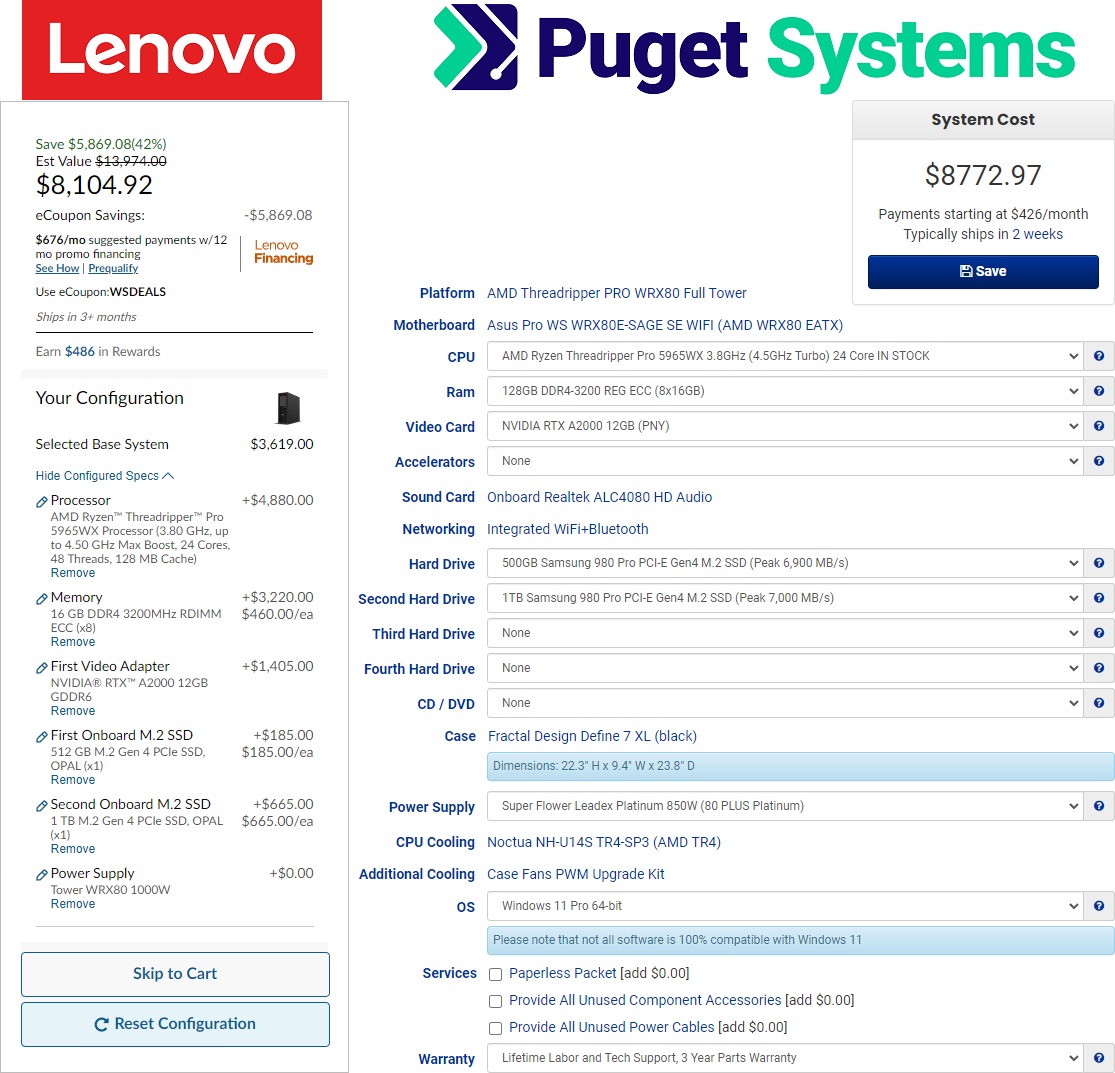 With fewer cores, a more modest (but still professional-grade) video card, and SSD sizes once again cut in half we see Lenovo take a lead on price in this category. They are almost $700 less expensive for this particular set of specifications, which translates to about an 8% difference. That gap could be closed with RAM and GPU options we have that Lenovo does not, but then it would no longer be an apples to apples comparison. Should Lenovo reduce their "eCoupon Savings" in the future, that could change the price difference as well.

It is worth noting that there are some small items I intentionally left out of the equation, across all of these comparisons. Lenovo's ThinkStation P620 appears to come without either WiFi or 10Gb Ethernet by default (presumably it has 1Gb Ethernet?) while our Threadripper Pro workstation has both of those built into the motherboard. Adding them would cost over $100 more. Similarly, they default to including a basic keyboard and mouse – while we do not. Dropping those, if unneeded, would save you a few dollars.

Overall, though, I think the comparisons above are very fair and paint a steady picture. Lenovo has an edge on price when it comes to lower-end (but still powerful, to be sure) workstations, but as you climb up the performance ladder it evens out and then swings much further in the favor of Puget Systems at the top end. That makes sense to me as well, for a simple reason: we spend the same amount of time consulting with a potential customer, building and testing their system, and providing tech support for the life of the computer regardless of whether has a 24 or 64 core CPU, or whether it has an RTX A2000 or A6000 GPU. So it makes sense that many of our costs are fixed, regardless of exact system specs, such that lower-tier configurations end up costing a little more than some of our competitors – but then we save people a lot on the higher end by charging less extreme markups.

There are also several options that we provide here at Puget Systems that Lenovo does not, both are the top end (third and fourth video card options, more and higher capacity drives, etc) as well as lower down (GeForce video cards, non-Registered memory, etc). Combined with our no-pressure consulting, extensive quality control testing, and lifetime tech support, I firmly believe that Puget Systems workstations are the better value for our customers!

Let Us Help You!

Our goal here at Puget Systems is to help our customers get the right workstation for their unique mix of applications. Whether through configuring a recommended system, reading our numerous articles, or speaking directly with our consultants, we want to help you!

Please let us know in the comments if you have ideas for more ways we can be of assistance.